Pope Francis has inaugurated his papacy at a Mass in Rome, calling on global leaders and all the people of the world to defend the poor and the weak.
Up to 200,000 people attended the Mass in St Peter's Square.
His homily focused on protection - of the environment, children, the elderly and those in need, who he said were "often the last we think about".
Francis was elected by a conclave of cardinals last week to take over from Benedict XVI.
Benedict became the first pontiff in 600 years to abdicate last month. Citing his age, 85, he said he could no longer continue in the post.

Pope Francis, formerly Argentine Cardinal Jorge Mario Bergoglio and now the first pontiff from the Americas, has since his election called for a "Church for the poor" and has struck an informal and spontaneous tone.
His chosen name, Francis, honours St Francis of Assisi, the 13th-Century son of an aristocrat who spurned a life of luxury to live with and for the poor.
Pope Francis' homily at the Mass began by focusing on Joseph and his role as protector - of Mary, Jesus and the Church.
Francis, 76, expanded the image, referring to Francis of Assisi and saying that the role of protector was not just a Christian one.
He said: "It means protecting all creation, the beauty of the created world... It means respecting each of God's creatures and respecting the environment in which we live.
"It means protecting people, showing loving concern for each and every person, especially children, the elderly, those in need, who are often the last we think about."
Francis called on "all those who have positions of responsibility in economic, political and social life" to be protectors of creation.
"To protect creation, to protect every man and every woman, to look upon them with tenderness and love, is to open up a horizon of hope," Francis said.
Without care for the environment and fellow humans, "the way is opened to destruction and hearts are hardened", he said.
"Let us not allow omens of destruction and death to accompany the advance of this world."
Francis said the pope himself must be inspired by the lowly - "the poorest, the weakest, the least important, those who Matthew lists in the final judgment on love: the hungry, the thirsty, the stranger, the naked, the sick, those in prison". 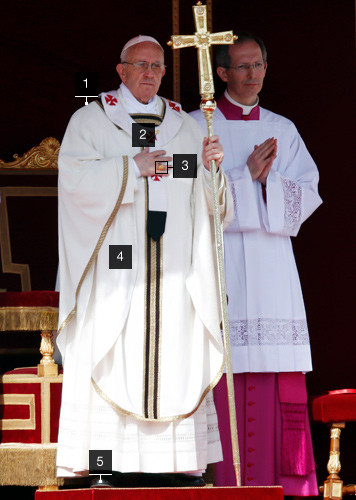 Francis had begun the day by touring St Peter's Square in an open-topped Popemobile.
At one point he stepped down from the vehicle and approached the barriers to bless a disabled man.
Francis spent 20 minutes touring the square, waving to the pilgrims who flew flags and shouted: "Long live the Pope!"
Isaac Adroamabe from Uganda, said: "My first impression is that the Pope is very humble, and has taken the Church in his heart."
Seven-year-old Pietro Loretti, from Italy, said: "I like him because he loves the poor."
As the Mass began, Francis was presented with his papal pallium made of lambs' wool - symbolising his role as shepherd of his flock - and the fisherman's ring bearing the image of St Peter holding two keys.
With this, Francis officially began his office as the 266th pope.
Communion was distributed by some 500 priests throughout the crowd.
The Mass was co-celebrated by around 180 clergymen, including Adolfo Nicolas, the superior general of Pope Francis' Jesuit order.
The list of attendees also included Bartholomew, the Orthodox Patriarch of Constantinople.
He is the first Orthodox patriarch to attend a papal inauguration Mass since the two branches of Christianity split nearly 1,000 years ago.
The Pope later greeted the assembled dignitaries individually in St Peter's Basilica.
Hundreds of people also gathered in the early hours of Tuesday in Plaza de Mayo, the main square in Buenos Aires, to watch the Mass broadcast on giant screens set up outside the cathedral.
They erupted in joy as a call from the Pope, made an hour before his Mass, was played via loudspeakers.
He said: "My dear children, I know you're in the plaza. I know that you're making prayers. I need them very much."