The Queen has visited sports stadium Croke Park in Dublin, where 14 people were killed by British forces during a Gaelic football match 91 years ago.

Earlier on day two of her visit to the Republic of Ireland, the Queen laid a wreath honouring Ireland's war dead.

At a banquet at Dublin Castle this evening, the Queen will make her only public speech of the historic trip.

She is the first British monarch to visit the country for 100 years.

The Queen was met at the main entrance of Croke Park by Mr Cooney and President Mary McAleese, who is hosting the visit.

A display of Irish set dancing was followed by a meeting with GAA officials.

Addressing the Queen, Mr Cooney said the visit would underpin and advance the peace process and "go down in the history of the GAA".

He said: "Your presence does honour to our Association, to its special place in Irish life, and to its hundreds of thousands of members."

On Tuesday, the Queen had laid a wreath in memory of those who died fighting for Ireland against her own country's forces.

Less than 24 hours later, she was on the opposite side of Dublin for another memorial - this time, honouring Irishmen who fought and died for Britain in WWI.

Dignitaries, including the Northern Ireland First Minister Peter Robinson and many other representatives from the unionist community, looked on as the Queen laid a wreath of poppies.

A lone piper played a lament and the band the Last Post before the Queen went to look at the Roll of Honour - the names of 49,400 men who went to war for the crown and did not return.

He added that he was "deeply saddened" to attend the funeral of GAA member PSNI Constable Ronan Kerr last month.

Dublin footballer Kevin Nolan, who was one of four players from across Ireland to meet the Queen at Croke Park, told Radio Ulster's Evening Extra it was a "great honour" to represent the GAA at the event.

On 21 November 1920, during the War of Independence, 13 spectators and one player were killed when British forces opened fire at a football match at the home of Gaelic sports.

The BBC royal correspondent Peter Hunt said the Queen walking out on the hallowed nationalist turf at Croke Park represented "the once unimaginable becoming the norm".

Her speech at Wednesday's state dinner is likely to acknowledge past UK-Irish difficulties without offering an apology, he added.

The Queen and Prince Philip were shown how to pour a pint of Guinness on their first stop of the day, but declined a taste of Ireland's most famous export.

They then met Prime Minister Enda Kenny and were shown around government buildings in the capital.

The Queen then laid a wreath honouring almost 50,000 soldiers at the Irish National War Memorial.

The Queen's attendance at the ceremony honouring the Irish soldiers who died in World War I reflects an aspect of history that has been troubling for her hosts.

For decades, when the focus of admiration was on the rebels who fought and died in the 1916 Easter Rising, the soldiers' contribution went unrecognised.

At the Guinness Storehouse Prince Philip leaned on the bar. Looked relaxed

Northern Ireland First Minister Peter Robinson, who was among the dignitaries at the ceremony, said: "Everyone remembers the past but we have to look to the future, but there are clear indications as a society - in the UK and Republic - people are moving on.

"They want better relations and we are in a new era."

In Dublin Castle this evening, which used to be the seat of British rule, the monarch will deliver a speech in the same room where Queen Victoria once dined.

UK Prime Minister David Cameron will be present at the state dinner, after flying in and holding talks with the Taoiseach, Mr Kenny, on Wednesday evening.

Mr Kenny has said he wishes to discuss the release of UK government files on the 1974 Dublin and Monaghan bombings, in which victims' relatives believe there was British state collusion.

At prime minister's questions on Wednesday, Mr Cameron told MPs that the relationship between Britain and the Republic of Ireland "probably has never been stronger".

"I think the scenes on our television screen last night of the visits that Her Majesty made, to heal the wounds of the past, but also to look to a very bright future between our two countries, are remarkable and hugely welcome," he said.

The first day of the royal visit went smoothly, although there were some protests.

During the Queen's visit to the Garden of Remembrance, in Dublin, riot police officers jostled with demonstrators at two separate protests on streets several hundred yards away.

The garden is dedicated to people who fought for Irish independence from Britain.

As the Queen, with President Mary McAleese alongside her, laid a wreath in the garden, the sounds of protesters could be heard and black balloons were released by some demonstrators.

Broadcaster RTE reported that 20 men had been charged with public order offences on Tuesday night in relation to the afternoon's violence.

Early in the day it emerged that a pipe bomb found on a bus bound for Dublin on Monday had been made safe by the Irish army.

One of the country's biggest security operations is in place for the Queen's four-day visit. 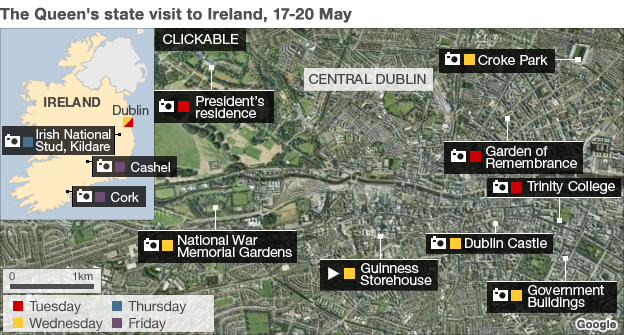 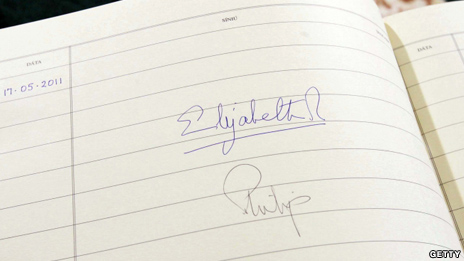 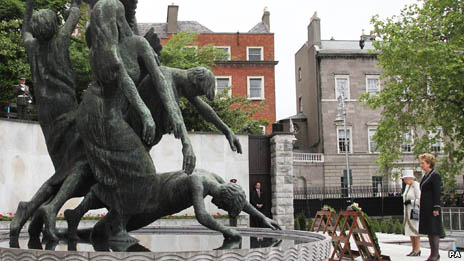 Wreath-laying at the Garden of Remembrance, the Queen (left) with President Mary McAleese (right) 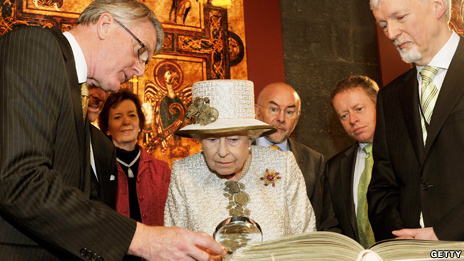 The Queen inspects the Book of Kells at Trinity College 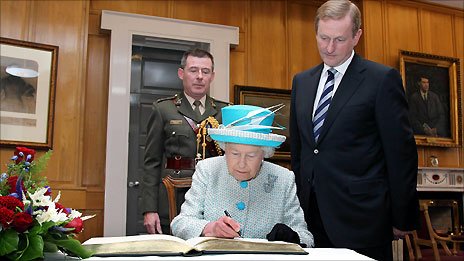 The Queen signs the visitors' book at Government Buildings, while meeting the Irish prime minister, on right 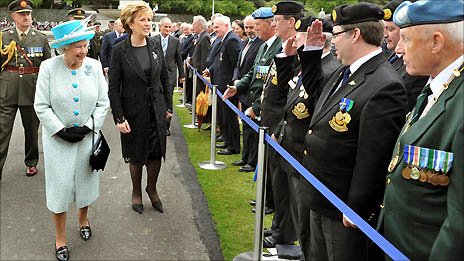 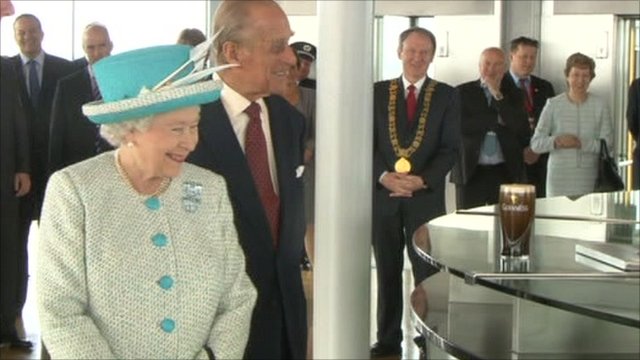 The Queen is offered a pint at the Guinness Storehouse 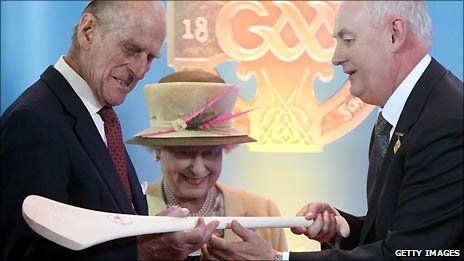 The Queen and Prince Philip receive a hurley stick, at Croke Park stadium 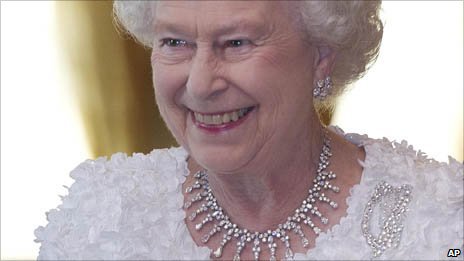 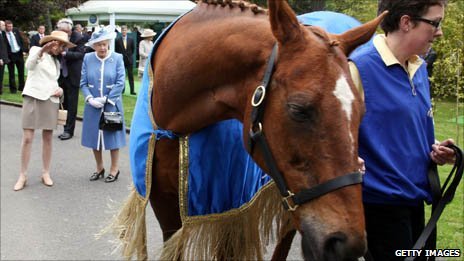 The Queen views the stallions at the Irish National Stud 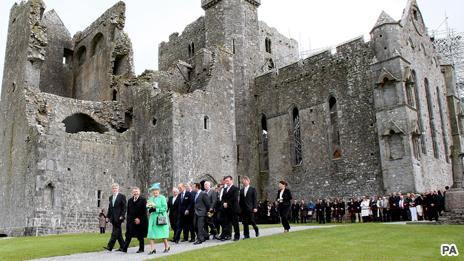 The Queen leaves the Rock of Cashel after a tour of the historic monument. 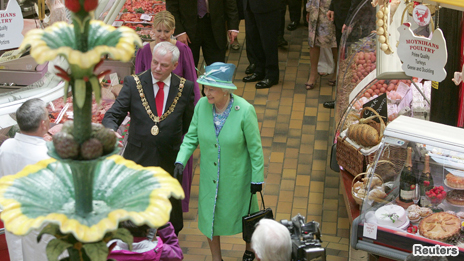 The Lord Mayor of Cork, Michael O'Connell, shows the Queen the best of Irish produce at the English Market.

Thursday 19 May: Visit to National Stud at Kildare.

Friday 20 May: Tour of St. Patrick's Rock, Cashel and the English Market and Tyndall Institute, Cork.

Employment decreased by 220,000 between April and June, said the Office for National Statistics.