For the first few months of the pandemic, Australia appeared to have successfully clamped down on Covid-19.

But since June, an outbreak in Melbourne has exploded. It is suspected to have begun with failures in the hotel quarantine of travellers arriving from overseas.

About three weeks ago, the nation's second-largest city embarked on a new six-week lockdown.

But halfway through, hundreds of cases are still emerging each day in the state of Victoria. Thursday and Friday saw the worst rises yet - 723 and 627 respectively.

The numbers are higher than those health officials had modelled for this deep into the lockdown.

So why isn't it working more effectively? The full picture isn't clear - but here's what we know so far.

The second wave is centred in Victoria, with most of the cases reported in the state capital, Melbourne. More than 9,000 cases were confirmed in the state in July - about half of Australia's total since the pandemic began.

The outbreak has spread a little, with small clusters identified in Sydney in neighbouring New South Wales, and a handful of infections recorded in Queensland. 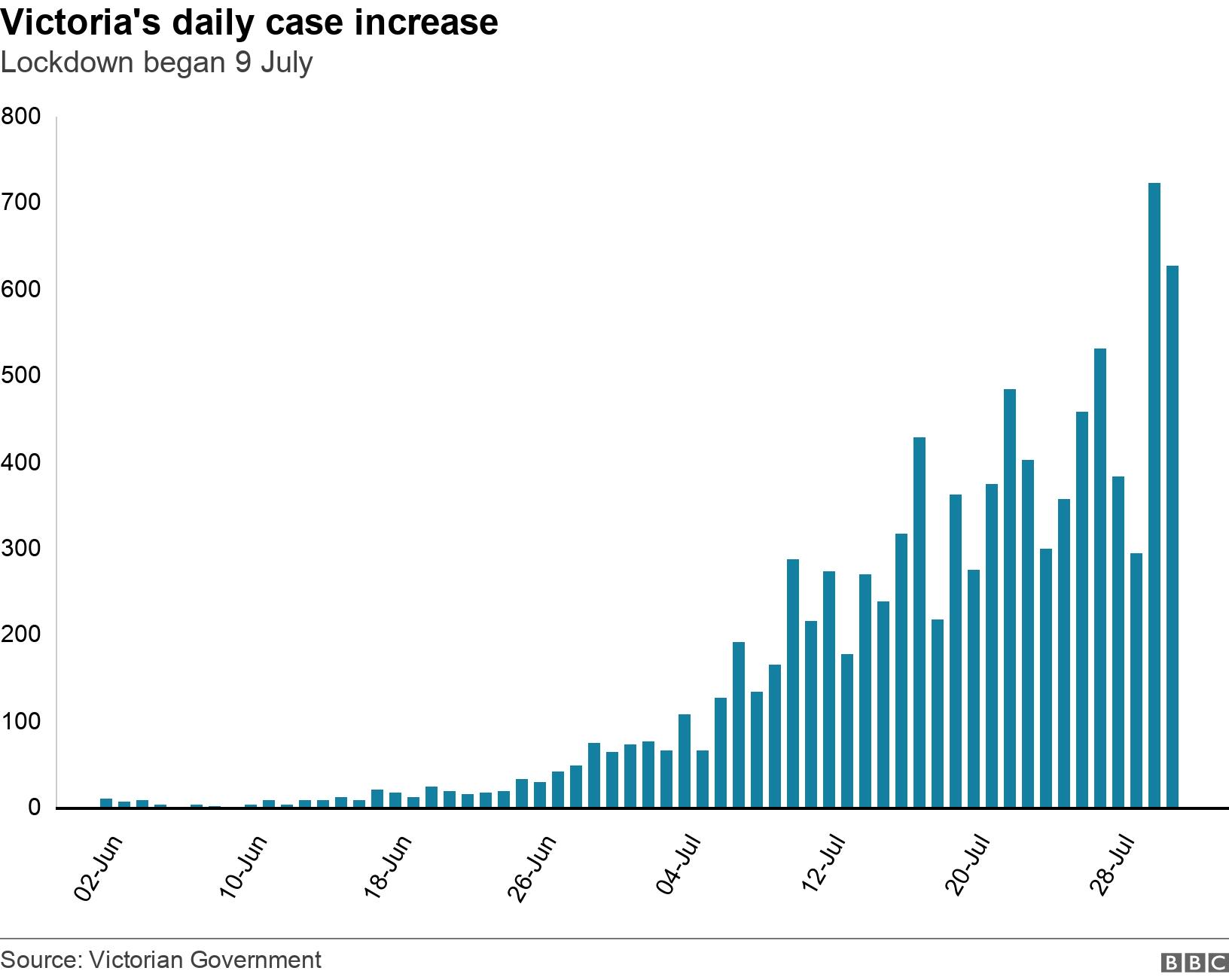 Often the people infected have been those who can't work from home.

The outbreak also appears to be being driven by people who might be in insecure work or working multiple jobs, as well as from family groups and care facilities, virologists say.

Are people breaking the rules?

Victoria's government has warned that many people are doing the wrong thing - such as going to work while sick.

"Together with community transmission, that is what makes cases grow and grow," said Premier Daniel Andrews.

Last week, he revealed more than half of newly infected people had not self-isolated while waiting 48 hours for their test result. Nine out of 10 also failed to immediately get tested after feeling symptoms.

Online there have also been instances of people flouting lockdown rules, claiming it breaches their human rights. They have drawn sharp rebukes from authorities.

Mr Andrews also acknowledged that in many cases, people were breaking rules because they felt they couldn't afford to take medical leave. He has since re-emphasised there is a pandemic leave payment for those who need it.

But is there enough data?

The latest record numbers mostly represent people who caught the virus about a week ago, when lockdown was well under way. This takes into account the timeline between feeling symptoms, going for testing and receiving results.

But overall it's hard to quantify the impact, experts say, when other assumed drivers of transmission aren't being measured publicly.

Experts say it's clear that transmission from asymptomatic people is happening, but the extent of it is unknown.

The continued high numbers also suggest the virus was embedded in the community earlier than first thought. But due to a lack of public information no conclusions can be drawn yet, says Prof John Mathews, from the University of Melbourne.

"There needs to be more transparency. We really don't know what data is being collected, and how well it supports the current policies," he said.

There are also questions about the rate of the government's response. Australia has deployed thousands more medical staff to identified hotspots - is it helping? Is the tracing of infected people's contacts happening quickly enough, as the state government insists it is?

Following an emergency meeting, authorities will now review all their lockdown case data to get "clarity on what's happening with this virus right now".

"That careful, considered work will happen today and tomorrow and then we will have more to say," Mr Andrews said on Friday. "My exclusive focus is on beating this thing - this wicked, silent enemy."

Most experts say that an extension of Melbourne's lockdown is likely. Based on what the review finds, it's widely speculated that tougher restrictions could be brought in.

Melbourne only made it mandatory to wear masks a week ago - meaning any positive effect from them is likely yet to be seen in the infection numbers.

A decline in cases over more than a week will be needed to indicate the situation is improving, experts say.

Although case numbers remain high, Prof Bruce Thompson from Swinburne University said it was encouraging that the reproduction rate had stabilised. Now, on average, an infected person is transmitting the virus to only one other person.

"For the past few days, it has been less than one, which provides significant hope," he said.