China is creating a network of ambitious land- and sea-based transport links to connect its booming economy with those of Europe and Africa. And it's wasting no time - designing incredible bespoke construction machines to get the job done fast.

President Xi Jinping's ambitious Belt and Road Initiative (BRI), launched in 2013, aims to connect two-thirds of the world's population across 70 countries through a network of land links (the "belt") and sea routes (the "road").

Officials talk about lifetime investments worth trillions of dollars, sourced from banks, participating countries and the Chinese government.

The scheme is not without controversy. Critics point out that it burdens poor countries with billions of dollars of Chinese debt, and dismiss it as a projection of Chinese foreign policy.

Nevertheless, evidence of the Belt and Road can already be seen in China and beyond, where a fleet of new machines is building railways at considerable speed.

How do you build high-speed railways quickly where large sections of the route must be suspended over valleys and canyons to avoid bends?

The SLJ is an all-in-one machine capable of carrying, lifting and placing sections of track, connecting pillar with pillar by heavy stone blocks.

This is how it works: 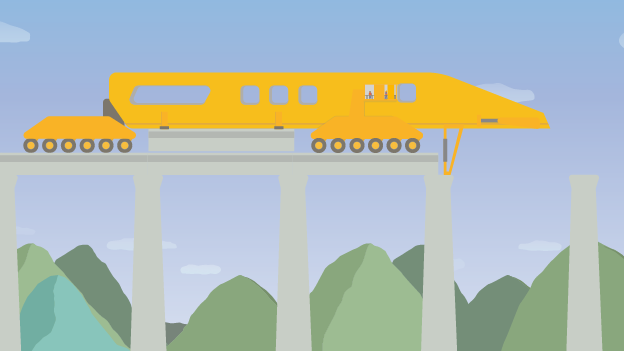 After laying each section, the 92m (300ft) vehicle - with the help of its 64 wheels - returns to collect another block. It then rolls forward over the part it has just laid to place another section.

Each wheel is in a fully rotating block of 16, meaning it can also move sideways.

Even with a full load, it can move at 5km/h (3mph), ensuring that the whole process is much quicker than traditional methods, which needed enormous cranes to be built on the ground.

At 580 tonnes, it is also much heavier than any of the railway traffic that will pass over the track it lays, meaning its bridges are made far stronger than necessary for rail traffic.

It has already contributed towards several high-speed rail projects, including a new link between Inner Mongolia and the rest of the country, propelling China towards its goal of 30,000km of high-speed rail by 2020.

Further south, the Su'ai Highway project in Shantou, not far from Hong Kong, presents the ambitious task of drilling 5km of underground six-lane motorway through an earthquake zone.

When the tunnel opens in 2019, officials hope it will modernise Shantou's transport connections in time for it to become one of the designated 15 key ports along the maritime Silk Road.

Previously, the machinery needed for the Su'ai Highway project would have been made overseas, but China has recently begun manufacturing its own tunnel boring machines (TBM) under license.

The result is this 15.3m slurry TBM, built by the China Railway Engineering Equipment Group Company, with help from freelance German engineers and unveiled in October 2017.

Like its German counterparts, it has a gigantic spinning disc at the front, capable of cutting into earth and rock.

Weighing 4,000 tonnes, it has 100m of trailing infrastructure that enables workers to install the tunnel walls as the cutting head inches forward powered by hydraulic rams.

As with other "slurry" machines, debris from the cutting head is mixed with a Bentonite (a type of clay) solution within the chamber, before being pumped away in pipes.

It is not the widest TBM in the world - that accolade goes to Bertha, a 17.4m TBM built for use in Seattle's Alaskan Way viaduct.

However, machines such as this one underline China's intention to become a key player in tunnel construction:

While the foundations of the BRI are laid across China, vast Chinese-funded infrastructure projects are already in progress thousands of miles away.

The Mombasa-Nairobi railway in Kenya received international attention when it was completed in May 2017, not least because it was 18 months ahead of schedule.

The 480km railway is the first new line for Kenya since independence.

With 90% of its funding coming from China's Exim bank, it is the first railway outside China built to Chinese construction standards with Chinese machinery.

To understand how the railway was built at a pace of 700m a day, look no further than the machine that laid the tracks.

Here it is in action: 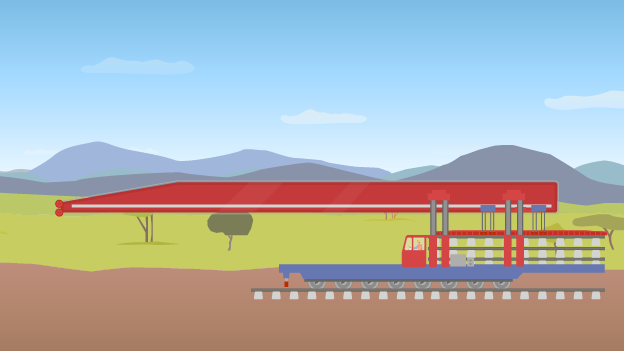 The track-layer transports prefabricated lengths of track along a railway line, sets one down, then rolls along the newly positioned track to set down the next one.

Once these pieces of track are in place, the short rails attached to each section are replaced with longer ones that will give trains serving the route a smoother ride.

It takes just four minutes to install each section of track.

This is not a new idea - the principle has been put into practice in many parts of the world for decades - but China does it fast, building the machines quickly and cheaply, and making them capable of carrying larger sections of track.

For all their technical wizardry, these machines still require an enormous amount of manpower.

Local workers - supervised by Chinese engineers - toil to create sections of track in temporary factories along the route of the railway.

They must then painstakingly ensure that the track section is secured in just the right place, with a margin of error of less than 2cm (0.8in).

There are concerns over their safety. Last year a senior Chinese engineer working on the Mombasa-Nairobi line told Xinhua news agency: "On-site accidents are commonplace.

"When they happen, they are almost always severe and often fatal."

For now, though, around a million passengers have taken the route, which cuts the journey time along the old British colonial route from more than 10 hours to about four.

Meanwhile, work has already begun to extend the line further west into Kisumu thanks to another $1.5bn (£1.1bn) loan from China's Exim Bank. Eventually, it will link Uganda, Rwanda, South Sudan and Ethiopia.

If all goes to plan - given the speed of construction made possible by these mega-machines - it will not be long before Kenya finds itself at the heart of a Chinese-funded East African rail network.

Update, 23/07/18: the drill graphic incorrectly featured an Earth Pressure Balanced TBM. This has been corrected to show a Slurry TBM.