North Korea has broadcast images of the once-powerful uncle of leader Kim Jong-un being removed from a meeting, confirming reports of his dismissal.

The dramatic images show Chang Song-thaek being escorted from a party session by uniformed guards.

The state news agency KCNA accused Mr Chang of forming factions against the state, corruption and "depraved" acts such as womanising and drug abuse.

Analysts say such a public dismissal is unique and could signal a wider purge.

It is the biggest upheaval in North Korea's leadership since Mr Kim succeeded his father two years ago. Seen as an economic reformer, Mr Chang handled talks with Pyongyang's only major ally, China.

The KCNA state news agency said the decision was announced after a meeting of the ruling communist Korean Workers' Party Politburo over the weekend.

News of his dismissal filtered out in South Korea last week along with reports that two of his close aides had been executed for corruption. It is unclear when these latest images date from.

The KCNA report accuses Mr Chang of being part of a faction working against the North Korean state.

"Chang pretended to uphold the party and leader but was engrossed in such factional acts as dreaming different dreams and involving himself in double-dealing behind the scenes."

It accused him of offences such as financial mismanagement and selling off national resources for his personal gain, but it also denounced him for leading what it called "a dissolute and depraved life".

"Ideologically sick and extremely idle and easy-going, he used drugs and squandered foreign currency at casinos while he was receiving medical treatment in a foreign country under the care of the party," the KCNA report said.

It added that he had "improper relations" with several women and "was wined and dined at back parlours of deluxe restaurants".

The BBC's Lucy Williamson in Seoul says such an official announcement detailing his alleged crimes is unique.

She adds that this could be seen as the latest in a series of carefully calibrated moves to demonstrate Kim Jong-un's control, yet another sign of his authority and an assertion of his independence.

Mr Chang is reported to have been stripped of all his positions and expelled from the party.

On Saturday, North Korean state TV was also reported to have removed footage of Mr Chang from a documentary.

Mr Chang had held senior posts in the ruling party and the National Defence Commission, the North's top military body.

He was seen as a key powerbroker at the time Kim Jong-un took over after Kim Jong-il died in 2011 - he is married to the elder Kim's sister.

He has often been pictured beside Kim Jong-un and was seen by some observers as the power behind the throne.

But despite his family ties to the leadership and senior status, he has been targeted in purges in the past.

In 2004, despite his place in the Kim family, he disappeared from public view.

One report at the time, citing South Korean intelligence, said Mr Chang had been placed under house arrest.

Others suggested he had been sent for "re-education". However, two years later he appeared to have been reinstated. 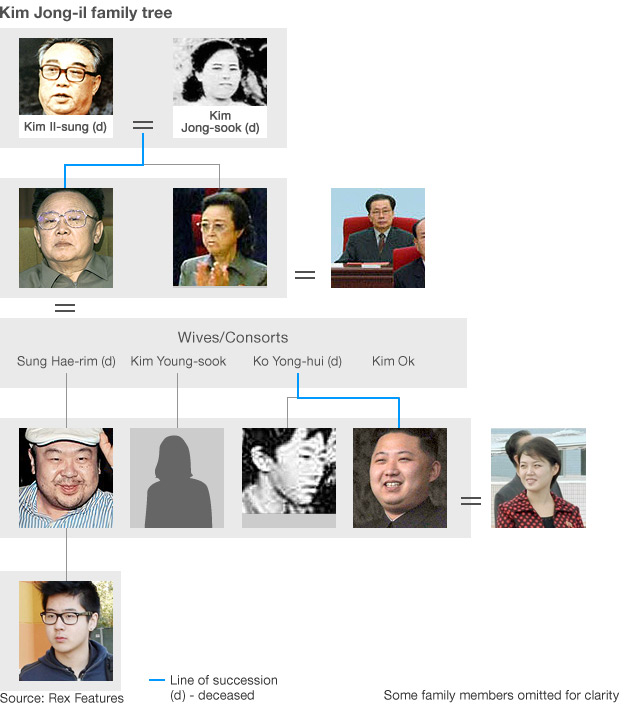