A rescue operation is under way in the Philippines in the wake of one of the strongest storms ever to hit the country. Typhoon Haiyan left a trail of devastation through the central islands - the city of Tacloban in Leyte province is one of the worst affected areas. 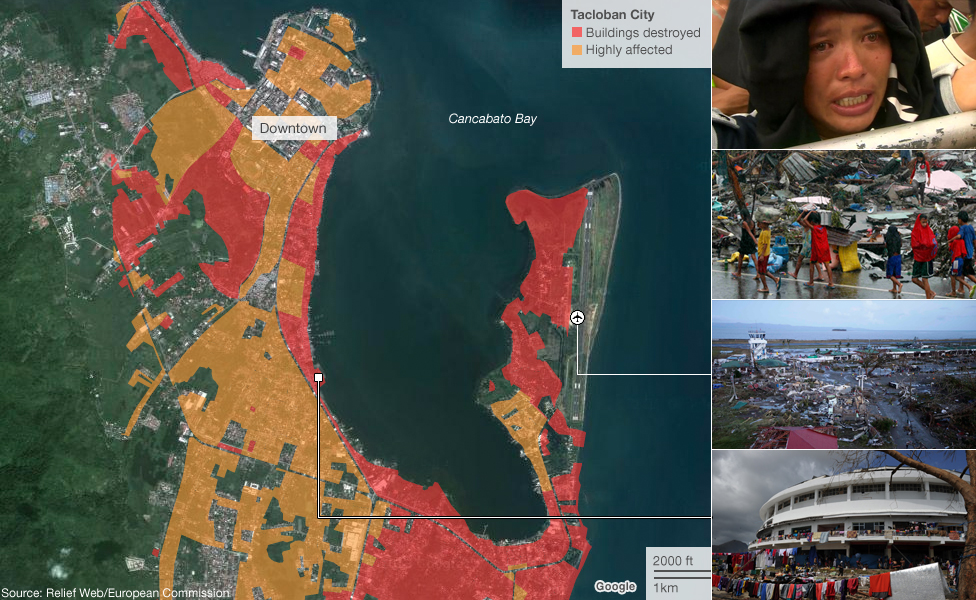 The true scale of casualties remains unclear. The authorities say at least 10,000 people may have died in the disaster - and according to UN officials about 11 million people have been affected - many have been left homeless.

In Tacloban, a city of more than 220,000 people, the mayor has declared a state of calamity. Many peoples' homes have been destroyed and people are desperate for food and shelter, but debris and continuing bad weather are hampering efforts to distribute aid.

The city lies on the easterly island of Leyte and caught the full force of the typhoon with winds approaching 310km/h (195mph). It was followed by a storm surge which is reported to have reached up to 5m and flattened homes, schools and badly damaged the airport.

Like many places in the Philippines, much of Tacloban is very low-lying. The spit of land on which the airport is located lies well below five metres. Official figures from the Global Disaster Alert and Coordination System suggest the storm surge reached 2.3m in Tacloban, but anecdotal evidence from people on the ground suggests it was much higher.

Tacloban is situated at the head of a bay, directly in line with the approaching typhoon. The winds pushed the water level higher and continued to rise as it was funnelled into the bay between the islands of Leyte and Samar, until it reached an estimated 5m around Tacloban and nearby settlements.

Although the airport was severely damaged, it re-opened three days after the typhoon to allow in the first relief supplies.

US military planes have begun delivering World Food Programme supplies, which are then being taken by helicopter to more remote regions.

Many people have left Tacloban, but for those that remain the main concern is still food and water.

Aid agencies have warned of a deteriorating security situation as people get more desperate. Although a field hospital has been set up, health officials have warned that the worst-affected areas were entering a peak danger period.

With another tropical storm on its way to the Philippines, the need for shelter, safe water and sanitation is essential, if outbreaks of infectious diseases are to be avoided.