High winds and record temperatures fanned fires in south-east Australia, after the prime minister warned of a "very dangerous day".

More than 130 fires are currently burning in New South Wales, 40 of which have not been contained.

An uncontrolled fire is burning by the Tasman peninsula, near areas already hit by blazes over the weekend.

Teams in Victoria are also fighting a blaze, as Australia's heat wave continues.

Four areas in New South Wales have been given a "catastrophic" fire danger rating, meaning that if fires break out they will be uncontrollable and fast-moving, so residents should leave.

"The word catastrophic is being used for good reason," she said. "So it is very important that people keep themselves safe, that they listen to local authorities and local warnings.

"This is a very dangerous day."

New South Wales Premier Barry O'Farrell told Australia's Seven Network: "If we get through today without loss of life and loss of property we'll have had a remarkable escape from what could have been."

The fires and warnings follow days of searing heat. In a statement, Australia's Bureau of Meteorology revealed that for each of the first six days of 2013, the "national area-average" temperature had been in the top 20 hottest days on record.

It was also the first time that average national top temperatures over 39C had been recorded on five consecutive days, the bureau said.

Bans on lighting fires are in place across New South Wales, Canberra, Tasmania and Victoria.

In New South Wales, temperatures had passed 40C by midday at the coast. Winds of up to 80kph (50mph) have also been forecast.

Fires are burning along the New South Wales coast, and also in the north-west of the state, but the largest concentration is in the south-east, around the Canberra area.

The four areas given a "catastrophic" fire danger rating - Illawarra, Shoalhaven, Southern Ranges and Riverina - are in this region.

A big fire is also burning in near Cooma, 100km (60 miles) south of Canberra. The fire service says it is out of control and have advised residents to seek shelter, saying it is too late to leave.

All national parks, state forests and reserves have been closed to the public and many tourists are reported to be leaving campsites. 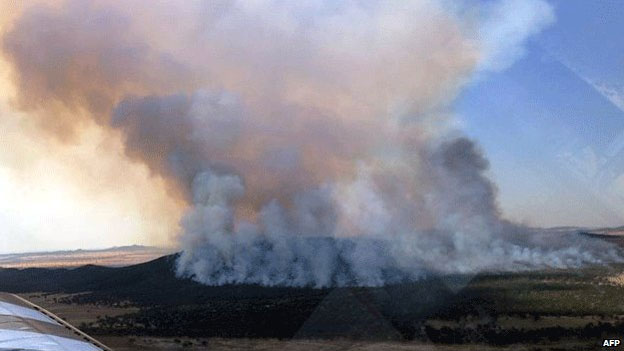 A number of fires are burning around Wagga Wagga in central New South Wales, where temperatures have been in the low 40s this week. 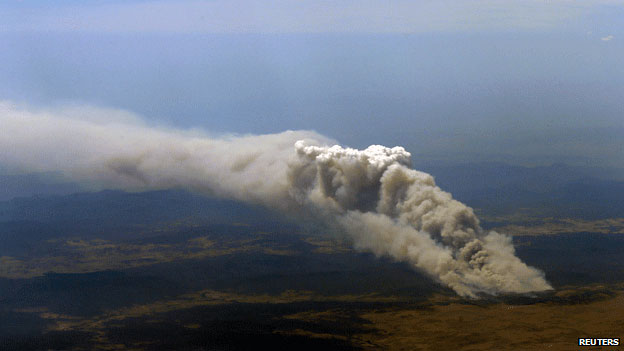 This aerial image was taken near Cooma, around 100km south of Canberra, on Tuesday. 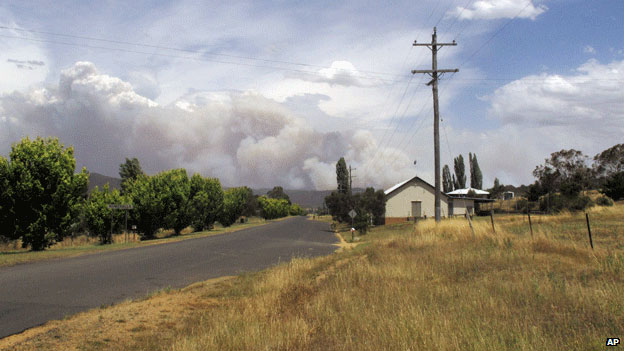 Wildfires burn in the distance outside the village of Numeralla, just east of Cooma in New South Wales. 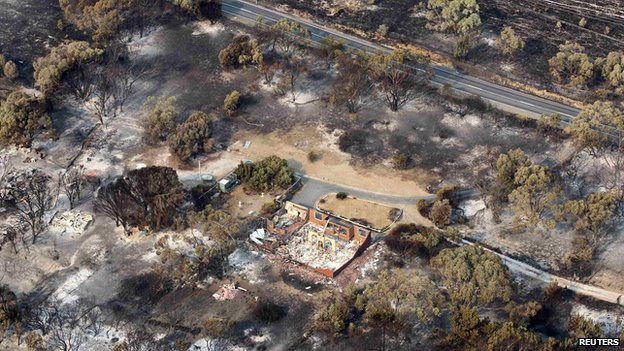 Fires continue to burn in Tasmania, where around 90 properties in the town of Dunalley were destroyed over the weekend.

"We have still got many hours of hot, dry, difficult conditions ahead of us, right across different parts of New South Wales," he said.

"Those conditions are to extend well beyond nightfall, with relief not expected to be across much of the northern areas of our extreme fire danger like Sydney until well after midnight."

"We need to remain vigilant and people need to be ready to act should conditions change in their area."

More than 100 houses were destroyed in Tasmania over the weekend by fire. Teams have been searching through destroyed buildings but no deaths have been reported.

A blaze between Forcett and the Tasman Peninsula - from which many people were evacuated by boat over the weekend - has been upgraded to dangerous, with residents instructed to go to a local boat ramp or beach.

In western Victoria, a fire in Kentbruck is burning out of control. More than 7,000 hectares (17,000 acres) of pine plantation has been destroyed and the blaze is now threatening the community of Drik Drik.

A fire was also reported in an electrical substation building at the Lucas Heights nuclear research facility in the south of Sydney.

The fire, believed to have been caused by an electrical failure, has been brought under control, local media report.

Cooler winds from the south should alleviate the heat in coming days, but officials warned that the southern front was moving slowly.

Oliver Jones, who lives in Penrith near Sydney, told the BBC the heat was extreme.

"It is currently 45C - which is the hottest I've ever experienced, coming from the UK originally," he said.

"As I was on my way home, I could see smoke in the sky, which was very hazy... I saw a number of people being treated for heat exhaustion and dehydration.