A bloody eight-month battle for control of the north Ethiopian state of Tigray has spilled over into the neighbouring region of Afar in the past week.

At least 20 civilians have been killed and 54,000 people have been displaced, reports say, as fears grow of a fast-developing humanitarian crisis.

This accusation has not been independently verified.

The BBC has also heard reports of numerous airstrikes targeting TPLF positions in Afar over the past few days.

The TPLF are fighting the Ethiopian army and its allies in Afar, which borders Tigray. A spokesperson for Afar has said the Tigrayan fighters captured three districts in the region this week.

Activists in Afar say there is a desperate need for food, water and emergency shelter.

The TPLF last month recaptured much of Tigray in a spectacular offensive against the national army.

What do we know about the fighting?

Multiple sources in Afar told the BBC that TPLF fighters had killed civilians in districts such as Yallo and Awra, as well as looting and setting fire to homes.

One resident who fled Yallo district two days ago said some people had been killed while attending a funeral.

A video circulating on social media echoes that claim. An Afar resident, translated by an Amharic speaker beside him, says: "We were digging a grave with about 20 individuals. I raised my cloth to signal to them that we were civilians when they approached, but one of them shot at us." The BBC has not verified the claim.

A TPLF spokesman tweeted that the rebels were not at war with the Afar people, but with Ethiopia's leaders.

Why might Afar be a target for the rebels?

This is not the first time the brutal conflict between the TPLF and Prime Minister Abiy Ahmed's federal forces has crossed internal Ethiopian borders. There has already been fighting in Amhara state, which at the beginning of the war seized Tigrayan territory which Amhara claims as its own.

But insecurity in the Afar region has many Ethiopia-watchers worried about the potential for the conflict to escalate from a regional crisis to a country-wide one.

"It's very significant," says Rashid Abdi, a Nairobi-based expert on security in the Horn of Africa.

"Afar straddles multiple strategic highways: one linking Tigray to [the rest of] Ethiopia. Another is the main arterial highway linking Ethiopia to Djibouti."

Ethiopia is a landlocked country and 95% of its cargo traffic travels along that highway, he says. "If the TPLF seizes this corridor it will cause serious disruptions to Ethiopia." 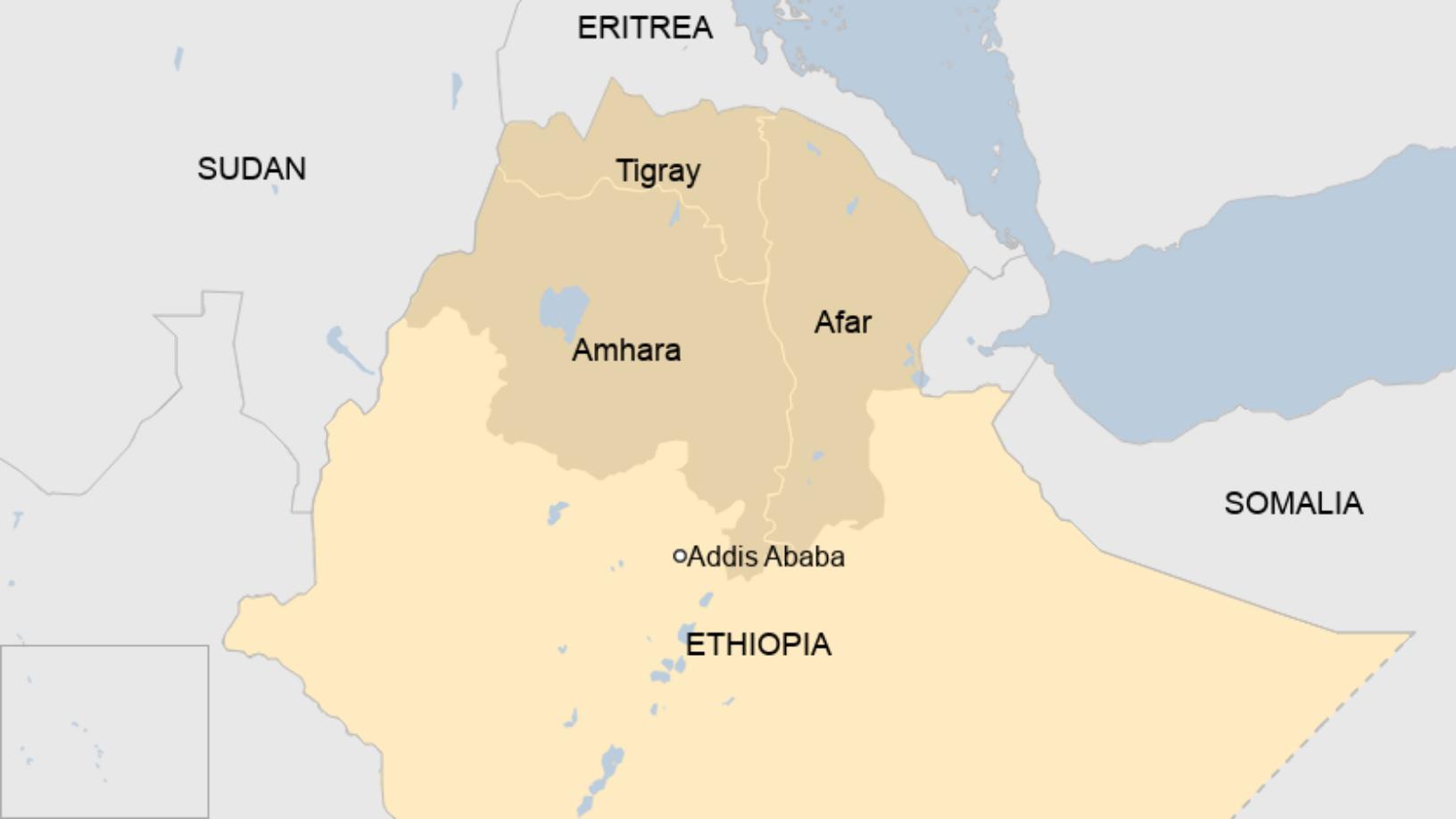 Will Davison, an Ethiopia analyst at the International Crisis Group, agrees that disrupting trade could be the strategy behind the TPLF's offensive in Afar.

"The main goal was to build on recent gains and combat in Afar the federal and regional forces Mr Abiy had gathered to mount a renewed offensive on Tigray, but a possible objective is to cut the Djibouti route - or at least demonstrate that they have the capacity to do so," he said.

"Another possible reason is there may be an effort by the Tigrayan forces to try and improve humanitarian access through the region."

How serious is the humanitarian situation?

Delivering aid to Tigray has been extremely challenging over the past few months, despite the urgent need there.

On Thursday, the international authority on famine classification - the Integrated Phase Classification (IPC) as it is known - said 400,000 people in Tigray were experiencing catastrophic levels of hunger.

But the UN World Food Programme (WFP) suspended aid deliveries along the Afar route after a 10-vehicle convoy headed for Tigray was attacked on Sunday.

The convoy was 120km (75 miles) from the regional capital, Semera, when the attack took place. The WFP says another convoy of more than 200 trucks containing food and other essential humanitarian supplies is currently on standby in the city - but it will not depart for Tigray until its security is assured.

It is not clear who attacked the WFP convoy, but Matt Bryden, from the think tank Sahan Research, says it is likely local pro-government militias are to blame.

Meanwhile the rhetoric from Prime Minister Abiy Ahmed has taken a worrying turn. At the weekend he issued a statement describing the TPLF as a "cancer". On Thursday, tens of thousands of supporters rallied in Addis Ababa to show support for the army - some holding banners quoting Mr Abiy's words.

"Unless there is a dramatic change soon, Ethiopia could be on a path to state failure," said Mr Bryden. "Five years ago the Ethiopian army was the most powerful in the region. The fact it couldn't secure Tigray shows how quickly the situation has deteriorated."