Akinwumi Adesina: Why the US is targeting a flamboyant Nigerian banker

The US and the African Development Bank have fallen out over allegations of corruption against the bank's Nigerian head, writes former BBC Africa Business editor Larry Madowo.

Akinwumi Adesina is a sharp dresser known for his expensive tailored suits, immaculate white shirts and an endless supply of colourful bow ties.

But the clean public persona of the 60-year-old president of the African Development Bank (AfDB) is now being questioned after a string of corruption and abuse of office allegations from his own staff spilled into the open. Mr Adesina has denied all the allegations.

The board of governors of the 55-year-old institution met on Tuesday to discuss whether to bring in an outside investigator into the allegations concerning the Nigerian's conduct just days after the US rejected an initial inquiry that cleared him.

The prospects of an independent probe comes only three months before he was expected to be re-elected unopposed at its annual general meeting in August.

US at odds with Africa

The 20-point allegations of "impunity and bad governance" from unnamed employees have exposed a rift between Mr Adesina and ordinary staff.

The "Group of Concerned Staff Members of the AfDB" claimed that Mr Adesina has used the bank's resources for self-promotion and personal gain while also paying out huge but undeserved severance packages to staff who resigned mysteriously, and favouring his fellow Nigerians.

US Treasury Secretary Steve Mnuchin personally signed a letter to the board rejecting an internal investigation that cleared Mr Adesina.

"Mnuchin's move is significant because it has now cast a limelight on governance issues and on [the] importance of an independent investigation to uphold the integrity of the AfDB," said Barbara Barungi, the bank's former lead economist on Nigeria. "There are very few people that were willing to stick their necks out."

Besides the core 54 African countries, the US is one of the 27 non-regional members of the AfDB and its second largest shareholder.

"I think AfDB is Africa's most valuable institution," said one insider who spoke on condition of anonymity.

"But what you have now is the biggest paymaster, the US, in a stand-off against the Africans. If you read Mnuchin's letter carefully, it has put the bank on notice."

The BBC has obtained the original whistleblowers' email from January 2020, sent to two executive directors of the bank, Yano Takuji (Japanese) and Steven Dowd (American), and the British director for its Integrity and Anti-Corruption Department Alan Bacarese.

In an April update circulated to a wider pool of senior managers, the whistleblowers said the Ethics Committee headed by Mr Takuji failed to examine their concerns.

The committee later carried out an investigation and declared that Mr Adesina was "totally exonerated of all allegations made against him" and recommended that the board of governors adopt its conclusions.

In early May, the board's chair - Ivorian Planning Minister Nialé Kaba - wrote to shareholders that the African finance ministers who supervise the bank's management intended to clear Mr Adesina.

"We fear that the wholesale dismissal of all allegations without appropriate investigation will tarnish the reputation of this institution as one that does not uphold high standards of ethics and governance," Mr Mnuchin wrote back.

"Therefore, the United States cannot support dismissing the allegations at this stage," he added.

Ms Kaba said in a statement that a decision had not been made about Mr Adesina and he remained in office.

"The bureau, which I chair, wishes to reassure the public that it is seized with the matter and it is treating it with the utmost seriousness that it deserves," she said.

The whistleblowers have accused Mr Adesina of major conflicts of interest in his dealings with current and former employees, unethical conduct and preferential treatment.

Mr Adesina, who holds a PhD in agricultural economics from Purdue University in the US, did not respond to BBC requests for comment but released a statement.

"In spite of unprecedented attempts by some to tarnish my reputation and prejudice the bank's governance procedures, I maintain my innocence with regard to trumped up allegations that unjustly seek to impugn my honour and integrity," he wrote.

"I am confident that fair, transparent and just processes that respect the rules, procedures and governance systems of the Bank, and rule of law, will ultimately prove that I have not violated the Code of Ethics of this extraordinary institution."

The AfDB board meeting is said to have agreed to an independent investigation into the allegations concerning Mr Adesina's conduct after Denmark, Sweden, Norway and Finland supported the US position, Bloomberg news agency first reported.

"Should it surprise the world that we're getting a second investigation backed by no African country? What does that say about the other countries that have lined up behind the US?" wonders Debisi Araba, a friend of Mr Adesina's.

"He's due to run unopposed but you want to muddy the waters with this stain of corruption. I believe he will be vindicated." 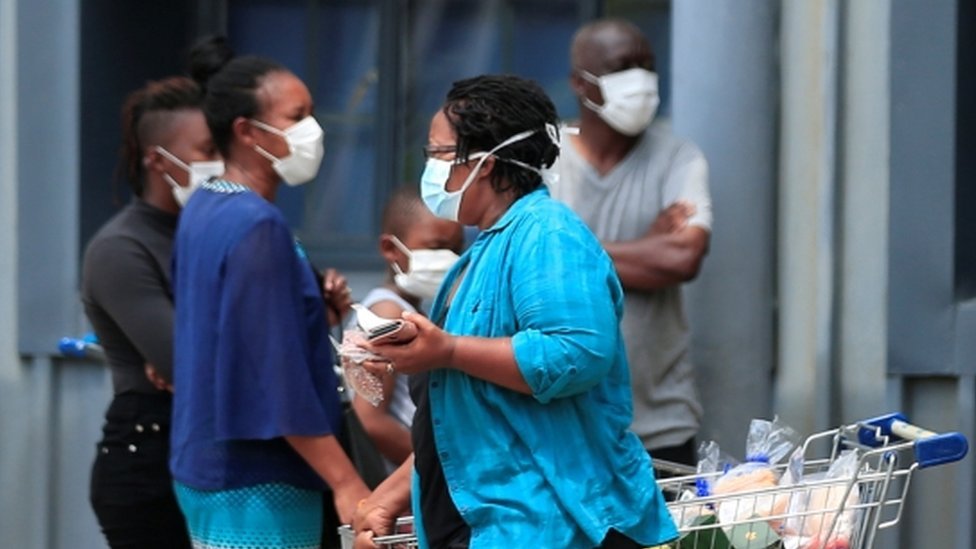 Reuters
Who the AfDB says it helped in May: Source: AfDB

Mr Araba worked for Mr Adesina in the Nigerian government and was also an intern at the bank while doing his PhD in 2009.

He says the bank has always had a culture of salacious rumour and gossip but faults the US for formalizing the "crass, bargain basement reasoning" into a complaint.

This was denied by a US Treasury spokesperson, who told the BBC: "The United States continues to value the AfDB and its efforts to promote development, reduce poverty, and address the current health and economic impacts of the coronavirus pandemic on the African continent."

Some policy analysts at think-tanks in Washington, DC, worry about the timing of the American pushback and its longer-term consequences in Africa.

"A prolonged battle will be a distraction for the AfDB when its resources are more desperately needed than ever for its borrowers," Nancy Birdsall, a Senior Fellow at the Center for Global Development told the BBC.

She said it was not good for the AfDB if Mr Mnuchin was unhappy and suggested that "the US Treasury should look for some form of quiet compromise in which no-one loses face".

Ms Birdsall also reiterated a recommendation she made in a 2018 paper for the leadership of the AfDB to open up its shareholding, including to China and oil-rich economies.

But Daniel F Runde, senior vice-president at the Center for Strategic and International Studies, disagreed.

He said the Abidjan-based bank that lends exclusively to African governments represented one of the few non-China-led and western-funded approaches to development on the continent.

"If Adesina is cleared, the US may need to mend fences with the management because China will probably go on a shopping spree in Africa after Covid-19, and we will need every non-Chinese tool to respond," he said.

Mr Runde saw Mr Mnuchin's letter as "disruption" and called it a good tactic but a poor strategy.

"Now that the Trump administration has caused disruption and perhaps made a point, they have to decide when this plays out," he said. 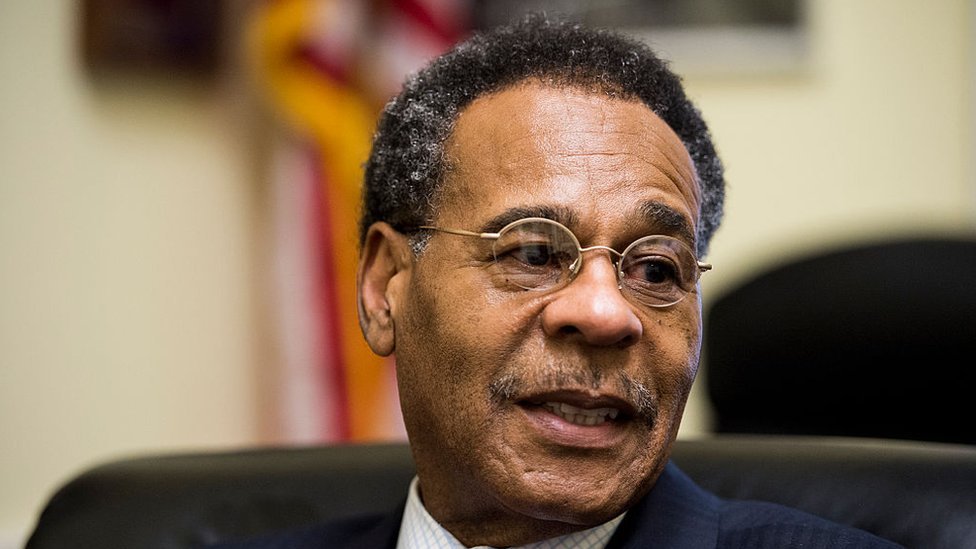 Last October, the 81 shareholders of the bank pledged extra funds to more than double its capital to $208bn (£170bn).

Missouri Congressman Emmanuel Cleaver, who sponsored a bill backing the capital increase in the US House of Representatives, came out in support of the new inquiry.

"Independent accountability measures strengthen institutions and reinforce their legitimacy - both domestically and internationally. I am pleased the African Development Bank's Board agreed to take this important step," the Democrat told the BBC in a statement.

Mr Adesina is an eloquent advocate for Africa and the bank and a good fundraiser, but his detractors say he promises more than he delivers.

"His administration hasn't always been fantastic and perhaps he has run roughshod over some people. Maybe the practices haven't always been what they should be, and the feeling is that the board just whitewashed the investigation," the insider said.

The whistleblowers also accused Mr Adesina of preferential treatment for Nigeria and Nigerians.

"I don't think we should trivialise the issues and reduce them to anti-Nigerian sentiment," said Ms Barungi, the Ugandan-born, Lagos-based former bank employee.

"It's really more about governance concerns that require attention and the investigation to help clear the air," she added.

Mr Araba, a Nigerian, said talk of the "Nigerianisation of the bank" was false as the country was under-represented in employee numbers despite being the largest shareholder.

Mr Adesina's carefully curated career could crumble if a new investigation criticises his reign at the AfDB."

As the crisis at the bank escalates, employees, consultants and government officials in African capitals, as well as American foreign policy nerds, wonder how this impasse will end.

But at the Treasury building right next to the White House, Mr Mnuchin and his advisors are doubling down.

"Undertaking an independent evaluation of facts is not at odds with a presumption of innocence, and by promoting transparency and good governance, it can only strengthen the AfDB's capacity to deliver results to people across Africa," the spokesman told the BBC.

Mr Adesina's carefully curated career could crumble if a new investigation criticises his reign at the AfDB. His style is solid, but the substance is now under scrutiny.

Money from the government will help protect the future of theatres, galleries and museums in the UK.

'Why is my body not important'?