The ban on the sale and transportation of alcohol during the coronavirus lockdown in South Africa has emptied hospital beds, ruined businesses, provoked violence and political disputes, and has led to a surge of interest in pineapples, writes the BBC's Andrew Harding from Johannesburg.
The idea was simple.
Ban all booze, and you'll prevent drunken fights, reduce domestic violence, stop drunk driving, and eliminate the weekend binge-drinking so prevalent across South Africa. Police, medics and analysts estimate - conservatively - that alcohol is involved in, or responsible for, at least 40% of all emergency hospital admissions.
In normal times some 34,000 trauma cases arrive at emergency departments in South Africa every week.
But since the nationwide lockdown came into force last month to prevent the spread of coronavirus, that figure has plummeted, dramatically, by roughly two thirds, to about 12,000 admissions.
"It's a significant impact," said Professor Charles Parry, with some understatement.
He has been modelling the extent to which the alcohol ban has been responsible for the decline in those numbers for South Africa's Medical Research Council.
"If we end the prohibition on alcohol sales, we're going to see about 5,000 alcohol admissions in trauma units coming back into the system [each week]," he predicted.

The fact that those 5,000 extra hospital beds now stand empty could soon prove invaluable if the pandemic - which has been held, impressively, in check here for several weeks - begins to spread again exponentially, as government advisors predict it may.
But medical experts, while urging the government to keep the alcohol ban in place, also point out that heavy drinking weakens the immune system and may have a particular effect on respiratory conditions.
"Covid-19 is going to have a more severe impact on heavy drinkers… and in South Africa many people live in crowded conditions.
"So, alcohol sales… may increase community transmission [as people often drink socially]… and we're likely to see an increase in gender-based violence and harm towards children," warned Professor Parry. 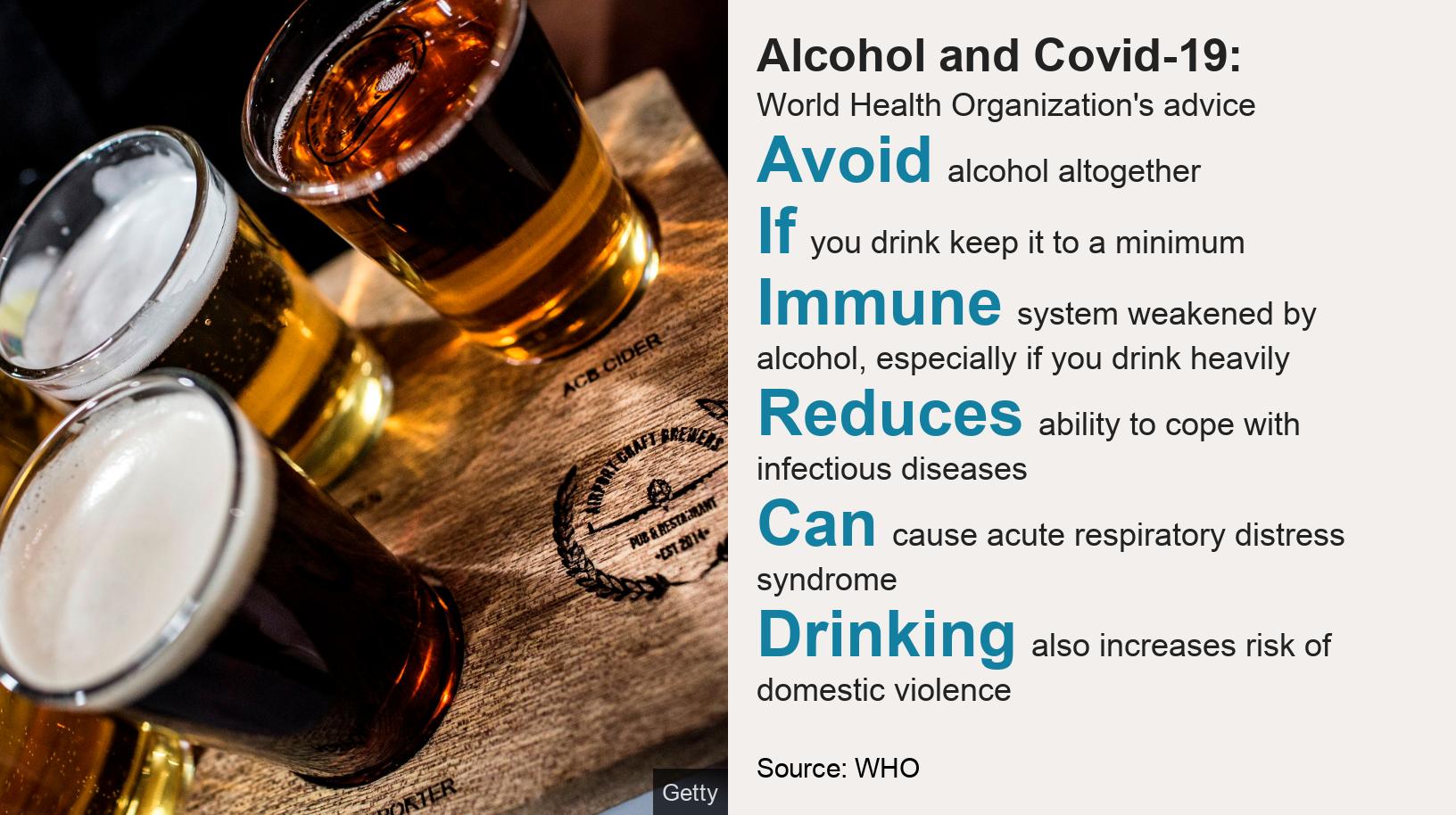 But how to enforce such a draconian and unprecedented clampdown for five weeks, or possibly more if South Africa's lockdown, due to end on 30 April, is extended once again?
The man responsible for policing the new prohibition has provoked anger in some quarters by appearing to encourage the security forces to take heavy-handed, and potentially illegal, action against those caught breaking the rules.
There have already been numerous worrying examples, including the alleged beating to death of a man caught drinking in his own yard.

Police Minister Bheki Cele, well-known for his abrasive language and his swaggering enthusiasm for the alcohol ban, recently warned that his forces would "destroy the infrastructure where the liquor is sold".
"It's deeply concerning when you have senior political leaders encouraging police officers to use violence or force, or to break the law. It seems as if the police minister has gone rogue," said Gareth Newham, a crime expert at South Africa's Institute for Security Studies.
South Africa's alcohol industry initially sought to challenge the ban in court, arguing that it was unconstitutional and introduced without consultation. It has since backed down.
But while many in the industry acknowledge the importance of supporting national efforts to fight the virus, there is frustration about a "one-size-fits-all" approach that is causing significant damage to many businesses.

'It could be game over'

"It's not looking good at all," said Apiwe Nxusani-Mawela, the country's first black female brewery owner and chair of South Africa's Beer Association, who fears her small business may go under if the ban continues for much longer.
"The arguments against lifting the ban do make sense. A lot of people are unemployed and use alcohol as a get-away drug," she acknowledged, but she said a more sophisticated approach - perhaps allowing limited alcohol sales - could save her industry from collapse.
"It could be game over for us," agreed Nick Smith, an American who owns a craft brewery outside Cape Town.
"This one-size-fits-all rule is having a major impact on smaller businesses like ours," added Mr Smith.

That argument is echoed by South Africa's official opposition party, the Democratic Alliance (DA), which is in favour of a "smart lockdown model" that would allow people to buy alcohol for a few hours each day.
But another party, the radical Economic Freedom Fighters (EFF), has called the DA's proposal "murderous" and "racist" since the current ban appears to be having the most positive impact on health in poorer, largely black, communities.

Many people have compared South Africa's prohibition to the US's famous, decade-long crackdown which began in 1920 in response to campaigning by religious and moral groups, and was immortalised by Hollywood in films like Some Like It Hot and The Untouchables.
As with Chicago's notorious gangster, Al Capone, there are concerns that the alcohol ban could push the sector here into the hands of criminals who already control a lucrative chunk of South Africa's cigarette industry.
"The longer the lockdown goes on, the more criminal networks will be able to entrench their ability to sell and distribute alcohol," confirmed Gareth Newham, warning that the government was already losing a fortune in taxation because of the ban. 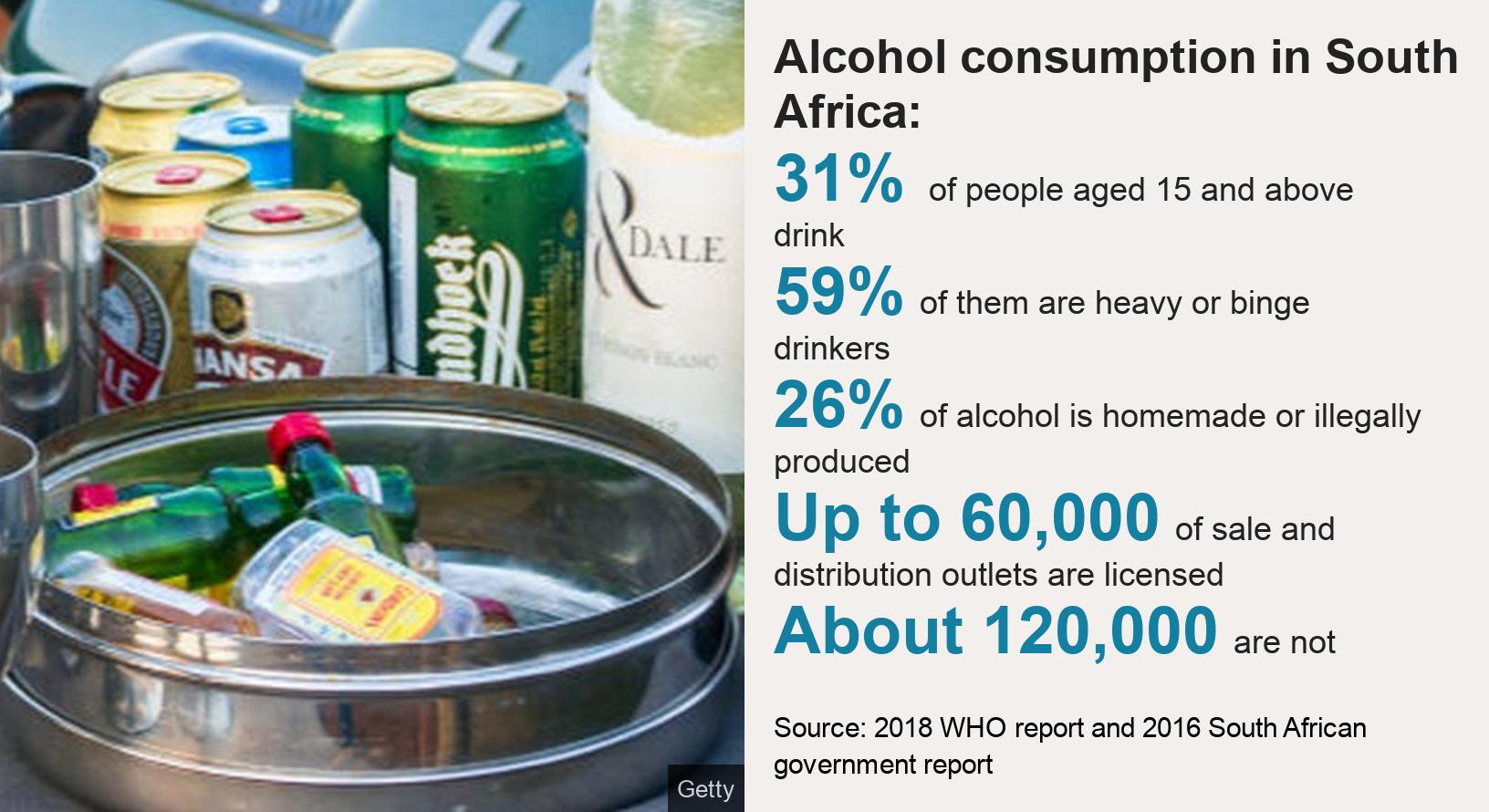 The ban has certainly tapped into deep undercurrents here in South Africa - a country with a history of apartheid where black citizens were once banned from drinking in public, and some workers were even paid in alcohol, causing huge social problems.
"We, South Africans, don't have a good relationship with alcohol. Over the years, it's something that has to a certain extent got out of control," said Ms Nxusani-Mawela.
But as things stand, one aspect of the ban does appear to be uniting people from different walks of life. It has created a new enthusiasm for home brewing, which has always been a firm fixture in rural communities.
Videos and recipes for pineapple beer and the more traditional corn and sorghum known as "umqombothi", are now being widely touted on social media, alongside warnings that such drinks, if wrongly prepared, could prove dangerous.