"We are grieving. I can't stop thinking about her. The entire family can't eat," a visibly pained Mare Abebe told the BBC.

She is worried about Belaynesh Mekonnen, a first-year economics student at Ethiopia's Dembi Dolo University, who was kidnapped last December, along with 17 of her colleagues.

As Belaynesh's guardian, Ms Mare is distraught for the girl, whom she said she had raised despite many challenges.

"I never thought this could happen to her, even in my dreams," she said, her voice cracking.

On 4 December last year, an unknown group of people blocked a bus and kidnapped students on board who were leaving for home from Dembi Dolo University in western Ethiopia.

The students, mostly ethnic Amharas, were fleeing ethnic violence and threats in the university that is located in Oromia region.

A total of 18 students - 14 women and four men - were ordered out of the vehicle at Sudi near Gambela city, about 100km (60 miles) from Dembi Dolo.

Belaynesh was among the 17 who had been reported missing, after one of the students, Asmira Shumiye, managed to escape.

It was Asmira's account of their kidnap and her subsequent escape that brought the matter to the public's attention.

Asmira said the young men who kidnapped them "looked like gangsters" and spoke in the Afaan Oromo language.

"They selected us and forced us to leave the bus. One person followed us and begged them to leave us, but they refused.

She said their captors repeatedly told them that they had no problem with them (the students). "Our problem is with the government," she quoted them as having said.

Their intention, she noted, was for Ethiopians to hold demonstrations to pressure the government to come and speak to them.

Inside the forest, the kidnappers kept their captives constantly on the move until some were physically exhausted.

"They made us walk for a long time. Some of the students were very tired. They stumbled and fell. While the abductors were trying to help some of them, I managed to run away. They didn't notice when I left," she told the BBC. 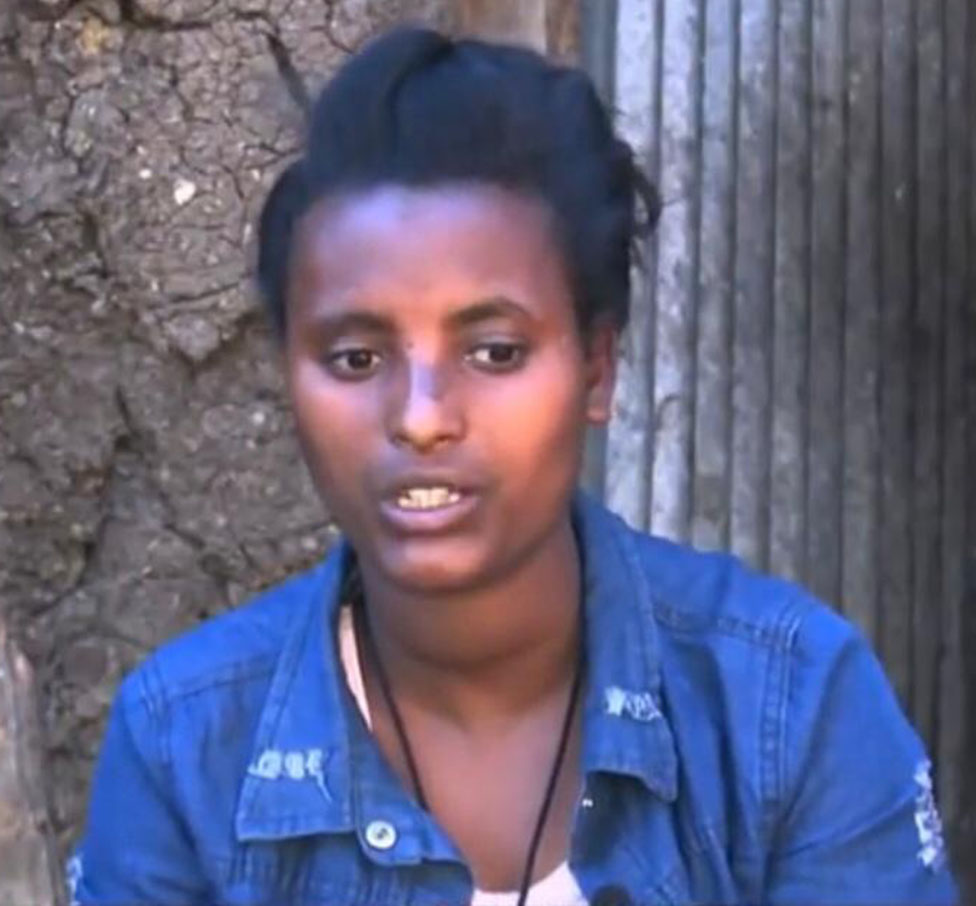 "I met an elderly man on the road. He was alone. He asked me why I was there... I begged him to link me up with the federal police.

After freeing herself, she spent two nights in the forest, uncertain of where she was until she came to a clearing near a main road.

"I met an elderly man on the road. He was alone. He asked me why I was there. I told him what had happened to us and he asked me where I wanted to go. I begged him to link me up with the federal police.

"He made me put on his jacket and and hide under a tree. He was saying: 'If those people [the kidnappers] see me, they might kill me.'

"I was frightened. He stood by the roadside and hailed a car for me. Finally, I managed to go back to the city and reported to the federal police."

What is behind the kidnapping?

It remains unclear why the students were abducted but it came at a time of rising ethnic tension in Ethiopia, especially in Oromia.

The Oromo people are the largest of the more than 80 ethnic groups in Ethiopia, constituting more than a third of the country's 100-million-strong population.

Many ethnic Oromos accuse the government of discriminating against them and there have been attacks on members of other ethnic groups in the area.

The kidnappings had been rumoured to be linked to Oromo rebels fighting the government in the region led by Kumsa Diriba, also known as Jaal Maro. The group denies it.

Even Prime Minister Abiy Ahmed appeared to be at a loss: "When Boko Haram [an Islamist militant group in West Africa] abducts people, it takes responsibility and announces that they did the action, but in this case, no-one took the responsibility of the kidnap.

"They [kidnappers] are unknown people. If we could say something bad happened to [the students], there is no evidence to show that," Mr Abiy said in February while answering a question in parliament.

How many students are missing?

After Asmira's escape, it took at least a month for the government to acknowledge the issue.

In the weeks and months after the initial incident, there were protests and a social media campaign to pressure the authorities to take action. But it had little effect.

On 6 January, the eve of Ethiopian Christmas Day, Amhara regional security head Temesgen Tiruneh finally acknowledged the issue saying: "We are aware four students have been kidnapped." Five days later, the prime minister's office said 21 students who had been kidnapped had been released and only six were still missing.

It is not clear why there is such a disparity in the numbers.

On 30 January, Deputy Prime Minister Demeke Mekonnen said the kidnapping of the students was one of the challenges the country was facing, and they would look for a solution.

But families are still crying out for the missing students.

Perhaps alluding to what the authorities ought to have done, Amhara region's former deputy president Lake Ayalew said: "As a nation, we have made little effort to release the students and as a result, the problem could not be resolved quickly." He was speaking in January, on the 50th day since the students went missing.

'We even don't know whether she is alive or not'

Habte Dagnew, the father of Grima Habte, a third-year mechanical engineering student, is in the same situation as Ms Mare.

He told the BBC that his son had called him three days after they were kidnapped, using an unfamiliar number, which he said possibly belonged to the kidnappers.

"He didn't tell me about what situation he was in. Maybe he was frightened. He simply said that he was OK, and asked us to pray for him. Since then, I haven't heard his voice and I don't know where he is.

"Where should I go? His mother got sick. She is not able to take care of our other children. She always thinks about him. I don't know what to do," he said.

Mr Habte said he felt "useless and powerless" for not being able to do anything about his kidnapped son.

"I wish I would die before him, as I don't know where I should go and fight for him. I have struggled a lot to raise him. I was expecting his graduation and his future success," he said.

Zewdu Adane, another parent, said after the news of the kidnappings, he and other parents went to the town where the university is located.

He had no luck in finding his daughter, Mulu Zewdu, a second-year psychology student.

He told the BBC that everyone in his family was very worried about her.

"Relatives, neighbours have been asking about her, but we don't have anything to say. We don't know where she is, or what condition she is in. We even don't know whether she is alive or not," he said.

"We are farmers; this is harvesting time, but we can't work properly," Mr Zewdu said.

The Ethiopian government has met some of the parents and assured them that their children would be safely rescued.

When Prime Minister Abiy Ahmed met representatives of families of the missing students in late January, the parents had reason to hope that their children would be found.

He made assurances that something was being done to rescue the students from captivity.

But hope is now starting to run out. Families are unsure what is happening, more than three months after the kidnaps were first reported.

A relative of one of the students last week told the BBC that the response from the authorities since meeting the prime minister is not what they expected.

On Twitter, Meti Shewaye Yilma directed her anger at Mr Abiy: "You woke up knowing the whereabouts & safety of your family but not families of abducted Dembi Dollo University students. God knows how the students woke up. @PMEthiopia, any news or progress on this case? #BringBackOurStudents

The situation remains a mystery, and parents are desperate to see their children again.

"We need our children. We are crying every day. We are worried about their wellbeing," Ms Mare said.

"We don't know whether they are alive or not, but we can't do anything unless the government returns our children or lets us know what happened to them."