After Brexit, the UK wants to boost business trade with Africa, but as a major UK-Africa business summit starts in London, Matthew Davies asks if there really will be new opportunities for the continent.

And the road that the Brexit can has been kicked down for so long is rapidly running out.

Prime Minister Boris Johnson and his Leave supporters have always expounded the virtues of being outside the EU, including the ability to negotiate its own trade deals on its own terms for the benefits of its own citizens.

Being part of a big gang has its advantages and disadvantages.

Yes, you have to make compromises and adapt your goals to match commonly-agreed policies. But you also get the power of the bloc behind you in trade negotiations.

Where does this leave Africa?

The UK's International Development Secretary, Alok Sharma, is, as one would expect, very optimistic saying that Britain's relations with Africa will be "turbo-charged", with trade, business and investment deals being struck left, right and centre.

The UK government seems to be taking it seriously.

The UK-Africa Investment Summit can be seen as evidence of that but any potential change in actual trade conditions is some way off. Possibly years.

What changes when Britain exits the EU?

Mostly, nothing changes at the end of January.

There will be much political posturing and speech making, but the UK will still be a member of the EU Customs Union and Single Market until the end of the year.

There is a provision for it to extend that by a further two years, but that would seem to be ruled out by Prime Minister Johnson.

That means trade relations between the UK and Africa stay the same for 2020, conducted under the EU's various existing deals with the continent.

Beyond the 2020 horizon, trade arrangements between many African countries and a fully-Brexited UK are also set to remain the same under a number of "continuity agreements".

These basically say that the trade conditions (tariffs, quotas, standards and so on) remain the same as they are currently between a number of African countries and trading blocs and the EU.

For example, in September last year, the UK initiated an Economic Partnership Agreement with the Southern African Customs Union (Sacu) - which is made up of South Africa, Botswana, Namibia, Lesotho and eSwatini - and Mozambique. 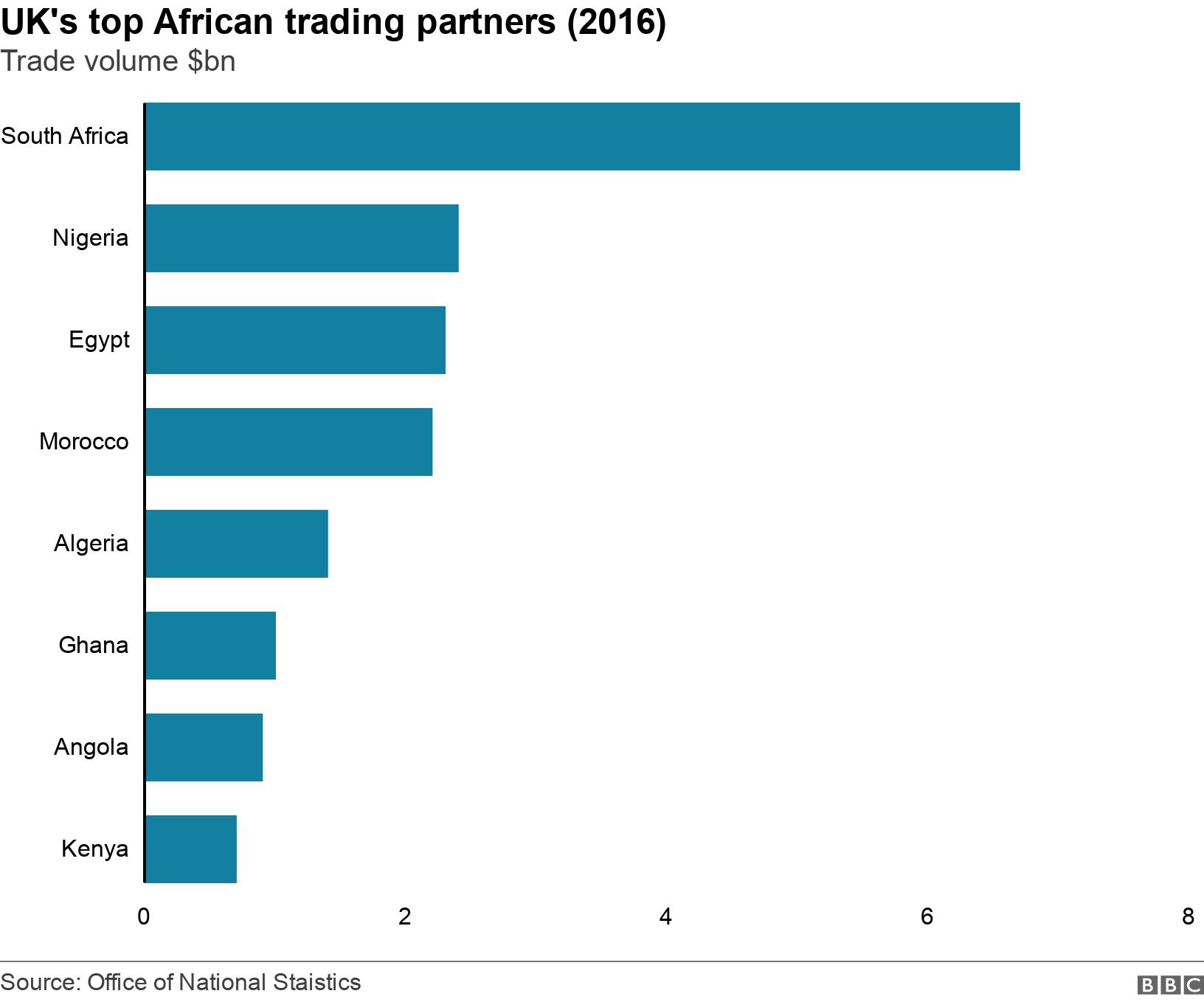 It is designed to keep things as they are under the current trade relationship that the southern African nations have with the EU.

It mirrors the agreement that the EU already has with Sacu.

According to Britain's International Trade Secretary, Liz Truss, the agreement "will allow businesses to keep trading after Brexit without any additional barriers". 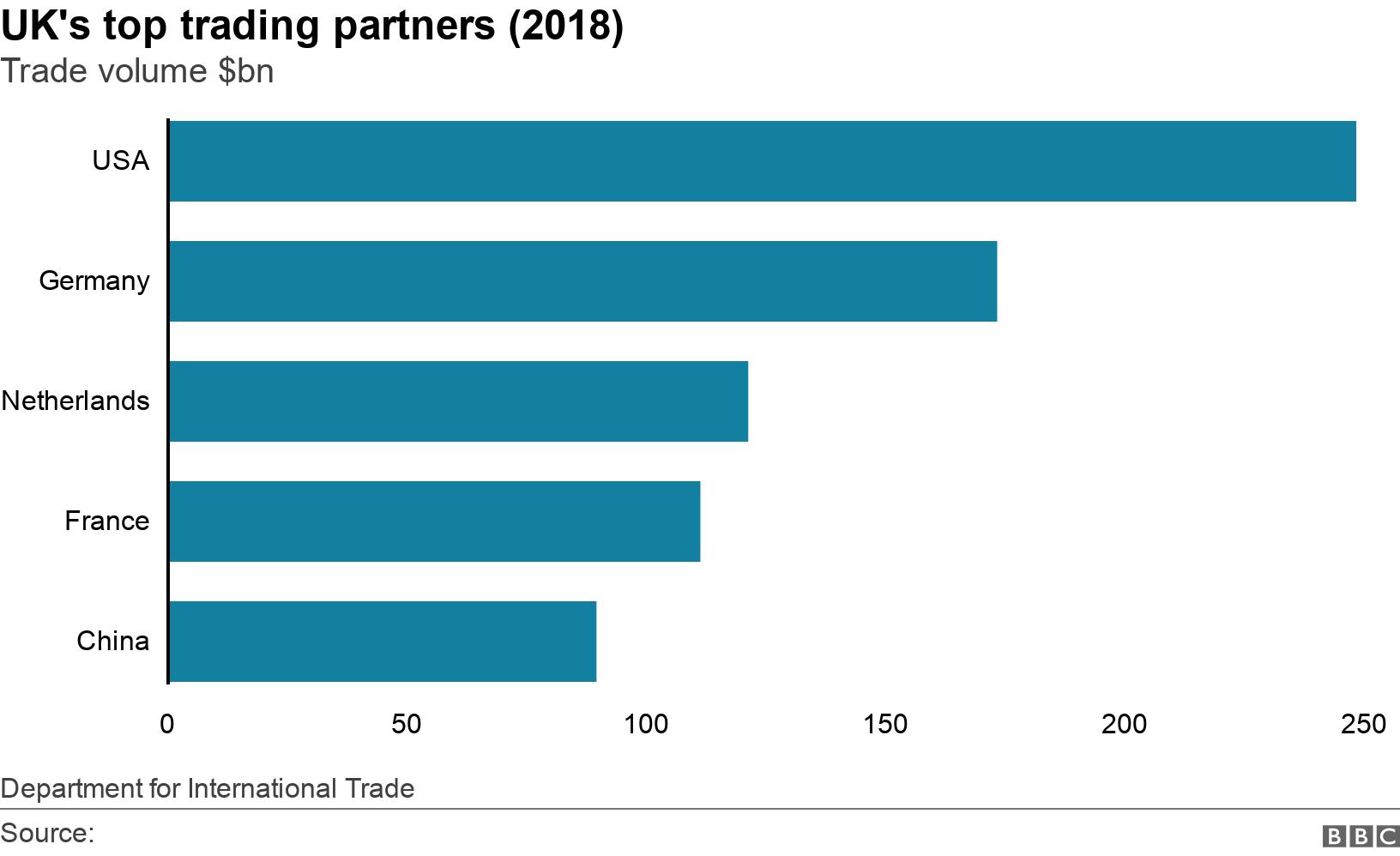 And that seems to be the UK's approach - keep the same conditions in place that already exist between the UK and African countries under EU deals. Worldwide, the UK has in place about 40 such "continuity" deals, covering some 70 countries.

The UK has been allowed to strike these deals with countries that already have similar agreements with the EU.

Why not change the trading arrangement?

Part of the reason of doing it this way is that it allows the UK to negotiate new arrangements with those who do not have an existing trade deal with the EU. The big one here is the United States.

Sounds simple, but it's not.

At least, not in the longer term because of the uncertainty that is still very much part of post-Brexit picture.

The "continuity agreements" will eventually run out. That's when the real opportunities and challenges for African states will emerge.

Can African countries get a better deal from the UK?

Outside the big EU gang, the UK, technically, has less negotiating clout.

That could mean that the African countries that trade with the UK may be able to squeeze out slightly more preferential terms in negotiations. Perhaps.

As mentioned earlier, trade negotiations are complex and require time and resources.

With the starting gun fired at the end of January, the UK's trade negotiating efforts will have to be prioritised.

Will the UK focus on Africa?

The lion's share of the UK's effort will be aimed at getting the best deal possible with the EU, its closest and, by far, its biggest trading partner.

Beyond that, deals with the likes of the US, China, South Korea and Australia will be prioritised, which means that African countries will be quite far down the list.

But it is also a question of volume and value. For example, South Africa is the sub-Saharan African country that does the most trade with the European Union.

Minerals, cars and agricultural products are exported into EU and of that total 18% end up in the UK.

But some agricultural products are subject to quotas.

Could the UK drop those quotas?

In theory, the UK could allow greater access to the British market than it does under the current arrangement, something which, for example, South African wine makers could take advantage of.

But equally, their French counterparts could lean on their government to lean on Brussels negotiators to get their exported wine into the UK under more preferential terms than those from South Africa.

In truth, it is impossible to tell what could happen, but this does point to the complexities of over-arching trade negotiations.

Uncertainty remains a factor, despite the efforts being made to counter it.

Razia Khan from Standard Chartered Bank says: "In the short-term, greater uncertainty will weigh on prospects, although this has been mitigated to some extent by the UK's offer of an extension of trade agreements for two years, in order to deal with this uncertainty."

Could Brexit effect other aspects of the African economy?

Of course, the Brexit effect goes beyond trade.

This may be seen if the UK falls into a recession after Brexit. That would hit places like South Africa hard.

The UN calculates that the UK is South Africa's eighth-largest import and export market in global terms.

If the UK's economy gets a recessionary cold, South Africa's could get flu.

And given South Africa's powerhouse status as regards other African economies, that would not bode well.

What about Kenya's flower growers?

Brexit could also require new infrastructure in the UK to deal with certain imports.

Flowers are one of Kenya's biggest exports and foreign currency earners. The industry is also a major employer, providing 100,000 people with direct work and around two million indirectly.

At the moment, Kenya's flowers enter the EU through the massive market in Amsterdam.

From there 18% of them end up in the UK. But what happens after Brexit?

Zero-tariff arrangements can still be place under a continuity agreement, but there could be physical problems.

The Kenya Flower Council has pointed out that the infrastructure for flying flowers directly to the UK is not as developed as the Nairobi-Amsterdam route.

In other words, there could be an impact.

What should business people be looking at?

As far as African companies are concerned, the post-Brexit world will depend very much on the nature of their business with both the EU and the UK.

"Companies that depend heavily on EU-related preferences in the UK market need to keep a watchful eye on developments in Europe; and on negotiations between the UK and their own country on future arrangements," says Matthew Stern at DNA Economics in Pretoria.

"If all goes to plan, these preferences will be maintained, but any slippage from either party could be costly for certain firms."

As African politicians and business leaders gather in London for the UK-Africa Investment Summit, uncertainty remains.

It may be mitigated to some degree by the continuity agreements, but somewhere down the line, new negotiations are likely to happen.

Uncertainty is the enemy of investment. And behind the handshakes and smiles at the summit, it will be at least one of the elephants in the room.