Thousands of Eritreans are waging a social media campaign - modelled in part along the lines of the viral ice bucket challenge - to force change in the one-party state.

They hope that the overthrow of neighbouring Sudan's long-serving ruler Omar al-Bashir will give impetus to their efforts to oust President Isaias Afwerki.

The campaign - under the hashtag #Enough in Tigrinya, Arabic and other Eritrean languages - has been driven by young Eritreans living mostly in Europe and the US because of repression in their home country.

It has won the support of a cross range of people - from veterans of the struggle for independence to music stars like Robel Michel and Yohannes Tikabo, popularly known as Wedi Tikabo. 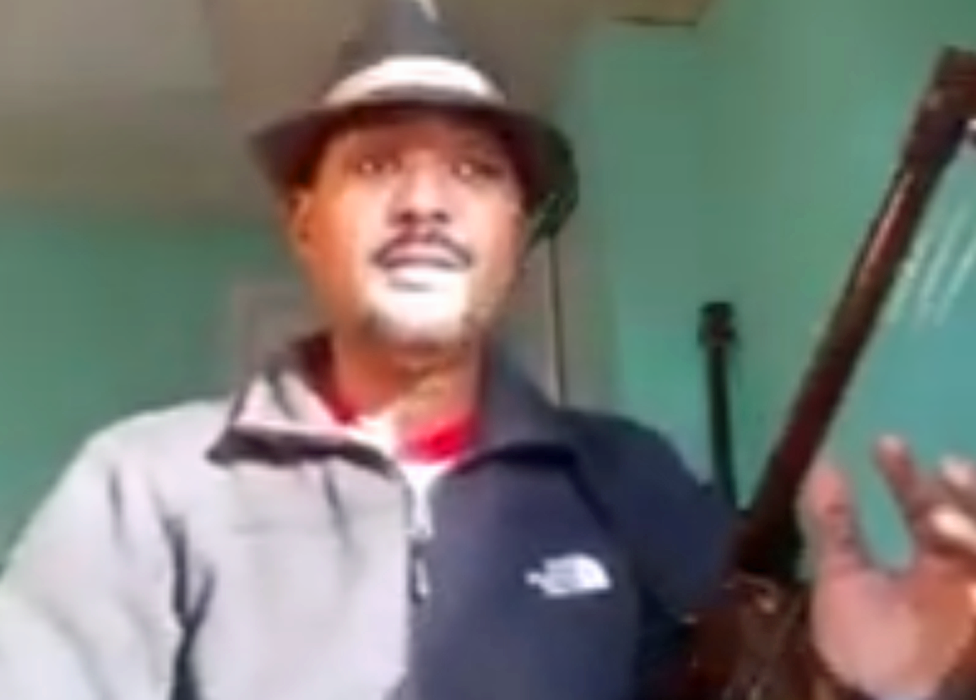 Enough to division, migration and horrendous journeys. Enough to putting people without due process in dungeons. Enough to living without a constitution"

In a video in Tigrinya, Eritrea's main language, Tikabo, who fled his homeland in 2013, says: "Enough to division, migration and horrendous journeys.

"Enough to the political upheaval overshadowing our country. Enough to putting people without due process in dungeons. Enough to living without a constitution."

'We must stop hiding'

Washington DC resident Amanuel Dawa was among those who started the campaign, challenging people to break their fear by identifying themselves and speaking out against Africa's only one-party state.

Mr Isaias took power at independence in 1993, and the country has never held a national election - not even a sham poll like those seen in some other authoritarian states where the ruler is returned to power with nearly 100% of the vote.

Instead, the government has banned opposition parties and the private media, jailed critics (some of whom have never been heard of for years), and has enforced military conscription. This has forced tens of thousands of Eritreans to flee to Europe, but many perish during the treacherous journey through the Sahara desert and over the Mediterranean.

Some people have recalled on Twitter their time at the notorious Sawa military camp, where young people and high school students are sent to begin their military service, which can last indefinitely:

This was me in Sawa when i was 16 years and 8 months old. Sawa is a really scary thing, and you never know what's going to happen. It's one of the most terrifying. I lived through this horror.#EndhighSchoolInSawa #Yiakl #Eritrea pic.twitter.com/xS4Kk1tb4p

"I started this initiative because I needed to know how long we would keep hiding our identities in this fight. The main agenda was to make ourselves visible and convey our message to the people of Eritrea as well as to the government," Mr Amanuel told BBC Tigrinya.

The leader of the youth wing of the ruling party in the UK, Sirak Bahlibi, has described it as probably the "worst smear campaign to be ever waged on social media", while the pro-government TesfaNews website has accused the Tigray People's Liberation Front (TPLF) rebel group of being behind the #Enough campaign - a charge denied by Mr Amanuel.

"Eritreans inside and abroad should not buy or believe the recent propaganda that is spreading.... The TPLF is doing anything and everything to destabilise Eritrea," TesfaNews wrote.

The campaign on Facebook and Twitter has stood out for its ice bucket challenge format, with people nominating friends - and celebrities like Tikabo - to speak out against repression in Eritrea.

One person can’t finish the fight; but they can sure as hell start it. Join the movement! #Yiakl pic.twitter.com/TC6xIFo9NT

Mr Amanuel sees it as a breakthrough - Eritreans in the diaspora no longer fearing that their relatives will be harassed back home or denied basic services.

In Eritrea, the government has kept tight control over the internet - only 1.3% of the population use it, according to Internet World Stats. Activists in the country therefore took the brave step of surreptitiously distributing anti-government leaflets, with the hashtag #Enough, in a bid to popularise the campaign.

"There are young people's movements within the country and they are the ones responsible for dispatching the #Enough leaflets," Mr Amanuel said.

He added that the campaign was also aimed at uniting government opponents.

"People are divided by their communities, their place of birth, their religion and many other segments of their lives. We want to stop these divisions and focus our energy towards one goal [to bring about multi-party democracy]," Mr Amanuel said.

Many Eritreans had hoped that following last July's peace deal with Ethiopia to officially end the border war between the two nations, the government would open up political space as there was no longer the fear of the country being "destabilised" by its neighbour.

But there has been no change, conscription continues and Mr Isaias remains as authoritarian as ever.

He has convened only one meeting of his cabinet since the peace deal was signed as well as giving no sign of reform in a speech he delivered last month to mark the country's 26th year of independence from Ethiopia.

This has led to opposition activists saying that the country is not under one-party rule, but one-man rule.

Meanwhile, Mr Isaias has exploited improved relations with Ethiopia to his advantage by getting it to restrict the activities of exiled opposition groups - one of them was forced to shut its office in Ethiopia's capital, Addis Ababa, as Eritrea's embassy reopened after about 20 years.

In a further sign of the regime's pariah status ending, the UN Security Council has unanimously lifted sanctions - including an arms embargo and travel restrictions on senior government and military officials - imposed in December 2009 after it was accused of backing militant Islamists in neighbouring Somalia.

But activists say the tide appears to be turning against the government inside the country - a recent example being the fact that the country's Catholic bishops issued a pastoral letter in which they lamented the "massive fleeing abroad" of Eritreans because living conditions had reached "critical levels".

"As long as the poisonous roots of this phenomenon is not eradicated, the escape to foreign countries is, we think, destined to last," the bishops said.

A group of more than 100 African writers, intellectuals and activists also wrote an open letter to Mr Afwerki this week, saying Eritrea was regarded as "the most-closed society on our continent" and the president needed to take steps to "restore" the country to its "rightful place in the family of African nations".

It is unclear whether he will agree or risk a popular uprising similar to the one seen in Sudan, which led to the military overthrowing Mr Bashir.

Although Sudan's revolution hangs in the balance following the brutal crackdown on the pro-democracy movement, Eritrean activists continue to be inspired by the protest movement there.

"What is happening now in Sudan is really awful and I don't have words to describe it, but still Sudanese people are standing up and that is an inspiration to all Eritreans and to the world," says Meron Estefanos, a Sweden-based Eritrean journalist and human right activist.

"The Sudanese people chose the non-violent method and I hope that for my people. If the Sudanese can do it regardless of the brutality we can do it as well."