The woman bringing Mandarin to Uganda

Wang Li Hong Sooma, who moved to East Africa from China more than two decades ago, is determined to teach Ugandans how to speak Mandarin.

The first 30 teachers have now completed their training and have started holding Mandarin classes in schools across the country.

The couple, who own their own secondary school on the outskirts of the capital, Kampala, can be seen as the perfect symbol of blossoming China-Uganda relations.

Together they can chat in a mixture of English, Mandarin and some of the local language Luganda.

They met 26 years ago in Beijing, when Mr Sooma was studying at Tsinghua University.

Though at first, Mrs Wang says, it was not easy for them to be together.

"It was a war! At that time, they thought I was a very loose girl to date a black boy. But I knew he is very honest and has a good heart to help other people."

They now have three children and Uganda has been their home since 1996.

In that time, the economic relationship between China and Uganda has grown tremendously and the couple are in a perfect position to capitalise on that.

How easy is it to learn Mandarin?

Getting the right tone:

They want to turn their school into a new frontier for Mandarin and Chinese culture.

Their teacher-training programme is being paid for by the government in Beijing - though it is not clear how much is being stumped up for the initiative.

Most Mandarin lessons in Africa are taught through Chinese government-run Confucius Institutes.

The first opened in Kenya in 2005 and there are now nearly 60 across the continent.

Some schools in Zambia and Tanzania also offer the subject, and the scheme in Uganda is sub-contracted to Mrs Wang by the Confucius Institute.

Forty more teachers are now enrolled and classes start at 08:00 and finish at 22:00 from Monday to Friday.

To become fluent and be able to teach a language within nine months is a huge undertaking, though Pavin Mulokwa, a teacher from the western district of Mbarara, sees it as an opportunity to broaden her job prospects.

Another trainee, Praise Twebaze, agrees and hopes it will enable him to travel too.

For 13-year-old Denis Mulungi, the Mandarin lessons he has just started at Lubiri Secondary School in central Kampala could shape his future career.

It is not just the Ugandans who see this course as a life-changing opportunity.

Gao Ya Hui, who has been teaching Mandarin in Uganda for a year, says it has changed her perceptions of Africa. 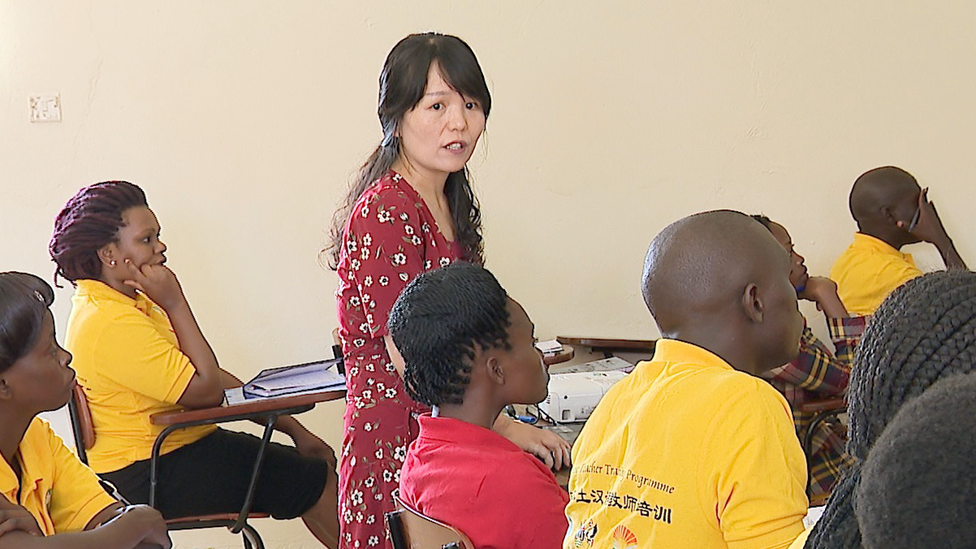 When I came here it changed my stereotypes about African people"

From Xian city in central China, the 39-year-old left her husband and child behind to come and teach but was warned by family and friends not to because of "diseases and war".

"When I came here, it changed my stereotypes about African people. When I go back to China, I will introduce the real Africa to the people in China and change their way of looking at Africa."

But some, like Fred Muhumuza - a Ugandan economist who has followed the growth of trade between China and Uganda - says questions have been raised about China's motives for funding such a scheme and whether the initiative has been forced on the Ugandan government.

He lists some the concerns he has heard: "Is this Chinese imperialism? Taking over Africa's resources, taking over even Africa's cultures and languages and wiping out everybody else?"

Aggrey David Kibenge, Uganda's education ministry spokesman, dismissed such apprehension, saying it was not political and that it was not unusual for a foreign government or organisation to support the teaching of a particular language.

Supporters of Mandarin lessons point to the benefits for Uganda from economics and trade: Giving young Ugandans a better chance at competing on the global stage and an opportunity to narrow a massive trade gap.

These are mainly consumer goods, machinery, electronics and textiles.

Mrs Wang's goal is to have 100 teachers trained up and teaching Mandarin in 50 Ugandan schools - both those that are privately and government run - by 2021.

She sees it as a win-win situation, giving the example of how Chinese students have benefited from learning English in their understanding of America.

New Covid and flu tests give results in 90 minutes

The rapid tests for hospitals and care homes will distinguish between Covid-19 and seasonal illness.

'I've got to know the man I killed'

How recession means jets end up in 'boneyards'

Why is video-sharing app TikTok so popular?

The Covid-19 heroes nobody talks about

Does the "marketing of doubt" really exist?

Go behind the boardroom doors to find out

Full article Does the "marketing of doubt" really exist?