Libyan rebels are battling troops loyal to Col Muammar Gaddafi for control of Tripoli, after launching an assault on the capital from several directions.

Rebel commanders say they have taken control of about 80% of the capital, including the headquarters of state TV.

But fighting is still raging in parts of the city, and the rebels have not managed to find the Libyan leader.

World leaders have urged Col Gaddafi to step down. US President Obama said his 42-year rule "was coming to an end".

The rebels, who were greeted by jubilant crowds in central Green Square, have set up checkpoints in parts of the city, and say reinforcements are due to arrive by boat.

But elsewhere in the city they have met stiff resistance.

A rebel spokesman said his forces had come under fire from tanks emerging from Col Gaddafi's compound at Bab al-Azizia in western Tripoli early on Monday.

Witnesses say there has been sustained gunfire in the area throughout the day.

Gaddafi loyalists remain in control of the area further south around the Rixos Hotel, where many Western journalists are based.

And rebels fighting in the west of the city were pushed back late on Monday.

"We are bracing ourselves for another night of intense street fighting," a Tripoli resident told the BBC. 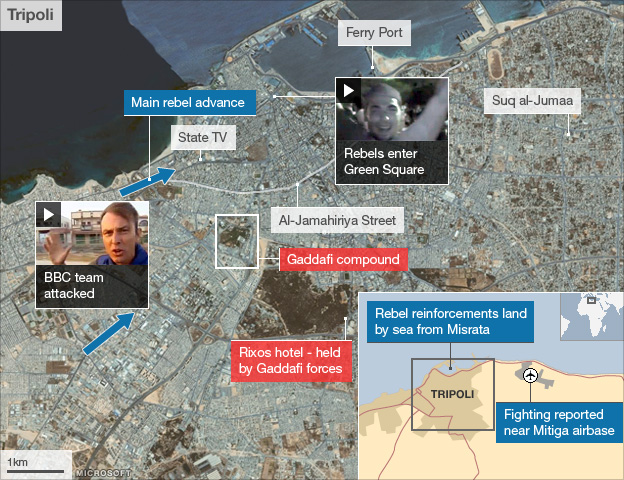 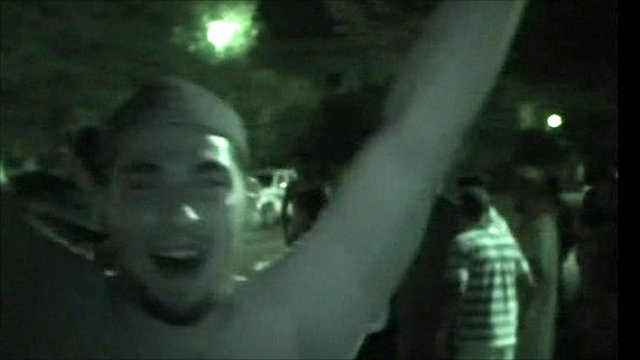 Jubilant rebel fighters pushed their way into the heart of Tripoli on Sunday. 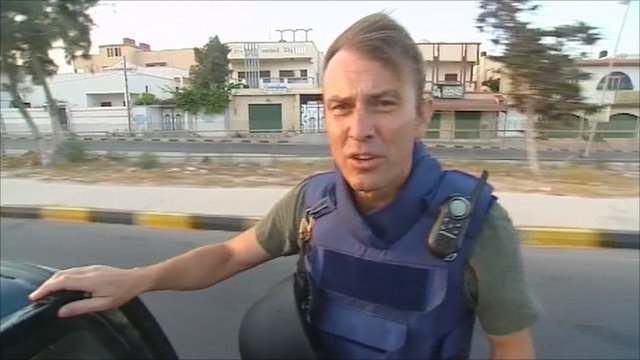 "I think Gaddafi security forces will resort to guerrilla warfare because they know they do not have the support of the people."

But another resident said rebel fighters were "breaking into people's houses, stealing everything", adding that the rebel assault would be "a disaster for Libya and Nato".

The unity of the rebel forces will come under severe test in the coming days because of the imbalance of power in the country. All of the key military advances have come from forces in the west. But political power is in the hands of leaders from the east in the National Transitional Council.

Libya's rebels have in their advance on Tripoli shown far better co-ordination than in the past, and their desire to put members of Gaddafi's family on trial shows restraint and not revenge.

Medical and food aid are the first priority. As soon as possible, Western embassies in Tripoli will reopen, and stabilisation advisers, building on lessons learnt in Afghanistan, will assist in ensuring that government services continue.

A draft transition document has an ambitious timetable for a constitution to be drawn up within three months and elections held six months after that. The document also guarantees freedom and basic human rights.

The BBC's Tripoli correspondent, Rana Jawad, who has been unable to report openly since March, says people in her district in eastern Tripoli were woken by the imam at the local mosque singing the national anthem of the pre-Gaddafi monarchy.

She says there is a sense that the end is near, and that the rebels have achieved what they wanted.

In Green Square rebel supporters tore down the green flags of the Gaddafi government and trampled on portraits of the colonel.

In a statement, Mr Obama said the situation was still fluid, and elements of the Gaddafi regime continued to pose a threat.

Hope and fear in media

"But this much is clear: the Gaddafi regime is coming to an end and the future of Libya is in the hands of its people," he said.

He appealed to Col Gaddafi to reduce further bloodshed by "explicitly relinquishing power to the people of Libya and calling on those forces that continue to fight to lay down their arms".

But the whereabouts of the colonel remain unclear.

Mustafa Abdul Jalil, head of the rebel National Transitional Council (NTC), told a news conference on Monday afternoon that he had no idea where Col Gaddafi was.

"We have no knowledge of Gaddafi being [in his compound], or whether he is still in or outside Libya," he said.

A diplomatic source told AFP news agency that Col Gaddafi could still be in Bab al-Azizia.

He has not been seen in public for months, although he has broadcast audio messages from undisclosed locations.

In a message broadcast late on Sunday, the Libyan leader urged residents to "save Tripoli" from the rebels.

Libyan Information Minister Moussa Ibrahim said fighting in the city on Sunday had left 1,300 people dead and 5,000 wounded. There is no confirmation of the figures.

He accused Nato of backing "armed gangs" with air power, adding that the Gaddafi government was prepared to negotiate directly with the NTC.