The population of Wales has reached record levels - but it is growing more slowly than in England or any of its regions.

The first results of Census 2021 have been published, revealing more than one in five people are now over 65.

But seven areas saw population falls, with the 5.8% drop in Ceredigion the third steepest in England and Wales.

Even in Newport, which grew the most in Wales over the decade to 159,600, this was only 69th highest rise across England and Wales.

The first set of Census results, published by the Office for National Statistics (ONS), also shows: 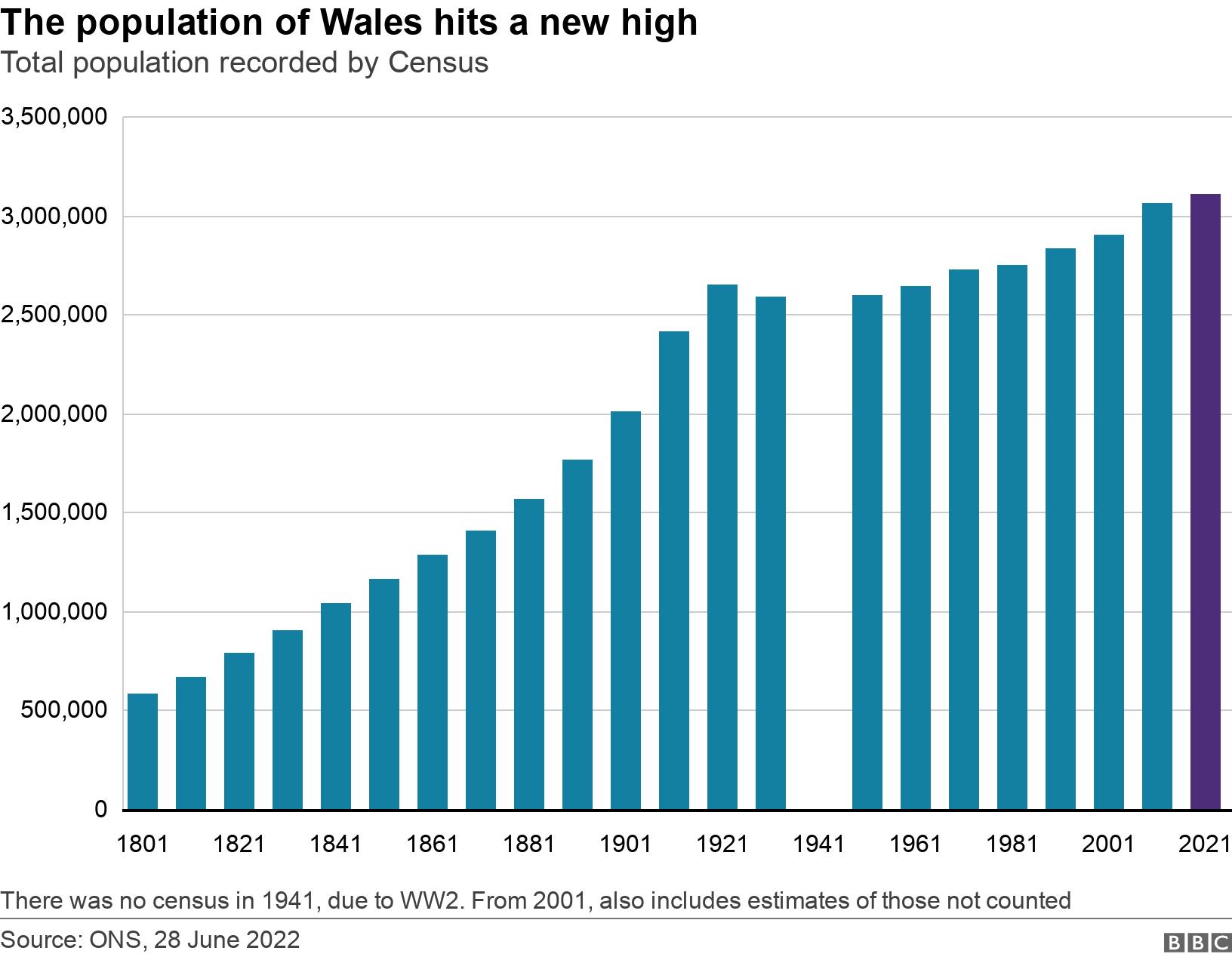 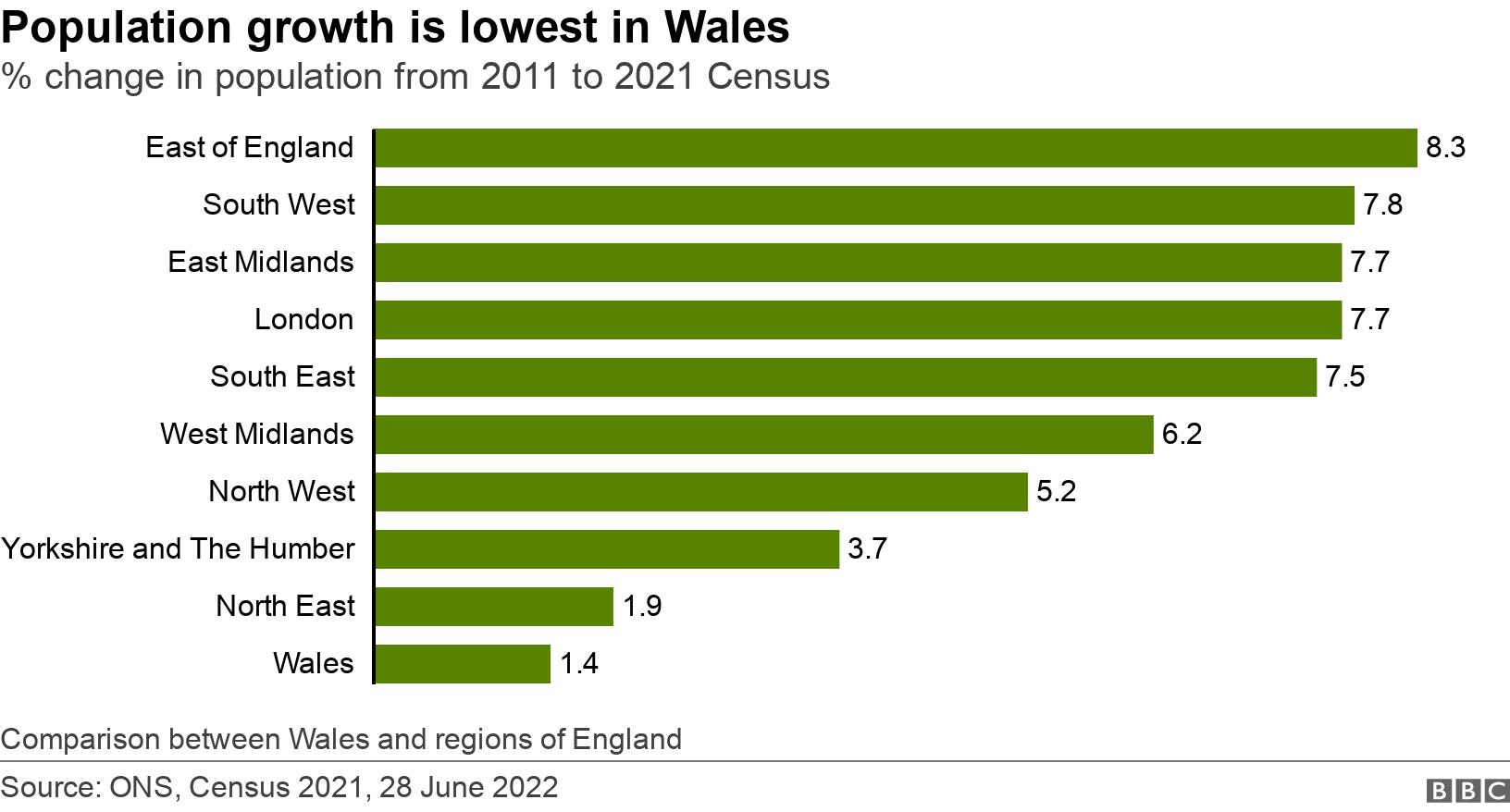 That rate of growth was also lower than any region of England, ranging from 8.3% in the east of England down to 1.9% in north east England, which saw the lowest growth in England.

Which area has seen the highest growth - or fall?

Newport has seen by far the biggest growth in population among Welsh local authorities.

New housing alongside the River Usk has sprung up in recent years and the end of the Severn crossing tolls in 2018 may have been a factor in attracting more people to live in Newport.

"You can probably get a bigger house with a garden, with a garage, with parking compared to a similar price in say, Cardiff or Bristol," he told BBC Wales.

"You've got the M4 motorway, great bus links, you've got a good train service connecting the local area, and you've also got good quality of life."

But seven local authority areas have seen falls in population.

There are also fewer people in Blaenau Gwent than 10 years ago - a 4.2% fall, while Gwynedd's population has declined by 3.7%.

There were also declines in Caerphilly, Anglesey, Conwy and a slight drop in Swansea, while there was zero growth in Merthyr Tydfil.

Wales has more older people than most places

Wales had a larger percentage of people aged over 65 than all regions of England, apart from the south west.

That's a higher proportion than in England, where it rose to 18.4%.

What about population density?

Not surprisingly, London is the most densely populated place across England and Wales, with 5,598 people living in every square kilometre.

That's 37 times more densely populated than Wales as a whole.

In Wales, there are 150 people for every square kilometre.

ONS say this is about the same as 1.1 residents for each area the size of a football pitch.

Given the rural nature of large parts of Wales, it's no surprise either that Powys (26 residents per sq km) has the lowest population density.

As well as the least dense in Wales, Powys has the lowest population density of any local authority area in England and Wales, along with Eden in Cumbria, which had been out on its own as the lowest in 2011.

Ceredigion and Gwynedd are also in the lowest 10 areas for population density.

Cardiff (2,572 residents per sq km) is more than three times as densely populated as the next Welsh urban area, Newport (838 people per sq km).

But it only ranks 73rd in densest populations in local authorities across England and Wales.

Your device may not support this visualisation

ONS will be releasing further results from the Census in the months to come.

From October, this will include new questions on sexual orientation, gender identity and previous service in the armed forces.

The details the Census provides are used to help policy-makers and organisations make decisions on how to provide a whole range of services in the future.