Courts in Wales: Calls to tackle backlog of criminal cases

Urgent action is needed to reduce the backlog of cases in the criminal courts in Wales, experts have warned.

Law Society members say the system was on its knees before Covid-19, but the pandemic has brought added challenges.

Now the former Lord Chief Justice of Wales, Lord Thomas, says the only way to find extra cash for an underfunded system is to devolve powers to Wales.

The Ministry of Justice said it had prioritised urgent cases and invested millions in technology.

Normally magistrates' courts only sit for remand hearings on a Saturday.

Thousands of cases are yet to be heard in Wales' crown courts - against a backdrop of tens of thousands in England and Wales, and more than half a million in the magistrates' courts.

Criminal solicitors say some cases have been waiting years to reach trial and social distancing for jury trials has slowed the process further.

Lord John Thomas of Cwmgiedd, who served as the most senior judge in England and Wales between 2013 and 2017, said additional funding is unlikely to come from the UK government, given the demands on the public purse.

But he said coordinated policies in Wales could focus cash at the root cause of problems.

While Lord Thomas says the courts in Wales have been managing well, he anticipates numbers will go up.

"With better funding of the police it's probably quite likely that those cases will rise," he warned.

"So although there may not be a problem at the moment, there certainly will be a problem in the courts in the future, if we don't try cases quickly."

What is the problem?

Latest figures show across England and Wales there are currently 41,599 outstanding cases in crown courts - a 3.5% growth since the end of March.

Figures are not broken down to show the picture in Wales but Law Society council member Scott Bowen said Cardiff and Newport, as an example, each had more than 2,000 cases outstanding. 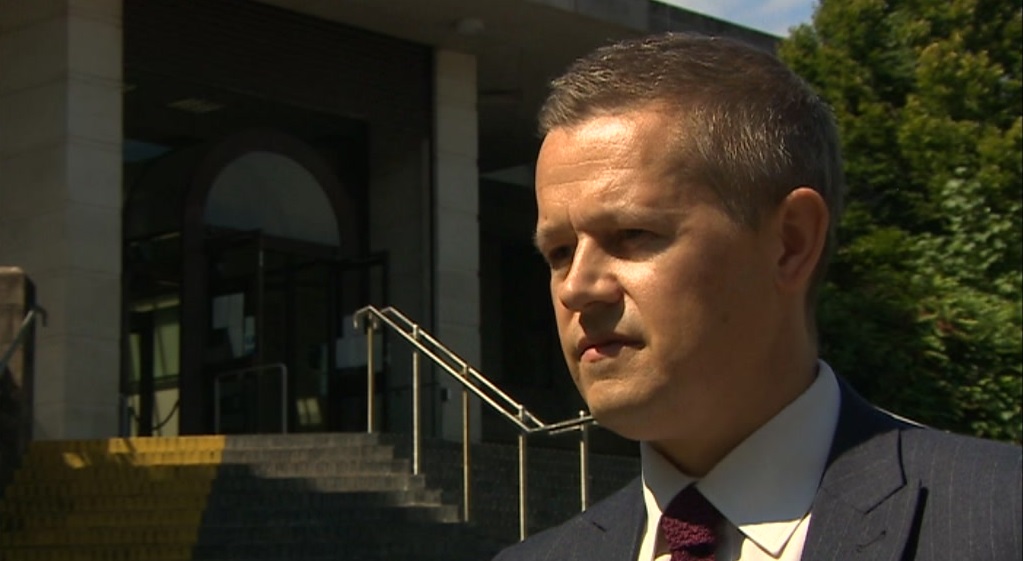 Newport-based Mr Bowen, who specialises in criminal law, said the 25% cut in the justice budget over the last 10 years has hit "every facet" of the justice system and that it was already "on its knees" before the pandemic.

"Whether you're a victim of a crime or accused of a crime, the funding is not there for the best evidence in every case," he said.

He said delays before cases came to court also have a huge impact on victims.

"It's getting to the stage now where there are catastrophic effects of the delay, and that's affecting the public's confidence in the justice system as a whole," he added.

What are the solutions?

The Ministry of Justice move for extra Saturday court sittings has been heavily criticised by both defence solicitors and the PCS union, which represents court staff.

"Those working within the system are often working till midnight to prepare for court the next day," said Mr Bowen.

"They're in court at eight o'clock to do the work before they get into the court. There's not a lot of meat left on those bones."

He added that as well as those working in the profession, witnesses and victims may also struggle to attend court if they have caring responsibilities.

"There are some solutions, but ultimately it comes down to investment in the system. We have to get it back on its feet, and until that happens, everything else is a sticking plaster," he added.

While Lord Thomas agrees the criminal justice system has been underfunded, he says the pandemic has given Wales the opportunity to find different solutions.

Among those, he says, is to return to hearing cases in more locations. Over the last decade 22 of Wales' 36 magistrates' courts closed.

But by sharing venues and using technology better, Lord Thomas says justice can be improved.

"There are few countries in the world where there's plenty of money and justice is a priority," he said.

"For most countries justice comes low in the pecking order. Although there may be promises of large sums being available, you have to take those with a very large pinch of salt. So you have to look at the justice system as a whole and how do you properly fund it?"

Last October, Lord Thomas's review of the criminal justice system - commissioned by the Welsh Government - called for those powers to be devolved.

"People question can Wales do these things. They say "they're just not up to it"," he said.

He said there were "compelling reasons" to bring justice into the other areas of home affairs as rapidly as possible.

There was a huge overlap between policies such as drugs, housing, looked after children and the criminal justice system - yet all but crime was devolved.

"That's the only way you can get more money for the justice system," Lord Thomas said. "I don't believe it will come out of anything else, because the other demands from the public purse are too great."

The UK government argues that its cloud video technology has been used in more than 10,000 criminal cases so far, while it had also expanded remote access to hearings.

The Ministry of Justice said it believed a single jurisdiction was the most effective way to deliver justice across England and Wales.

"We have kept the system running through the pandemic by prioritising urgent cases, rapidly increasing remote hearings, introducing Nightingale courts, and investing millions in buildings and technology," a spokesman added.

The prime minister is to ask for early elections amid the crisis over Tuesday's devastating blast.