A Welsh dairy farm described as a "sinking ship" after being plagued by bovine TB is trialling an innovative new test for the disease.

The developers claim it is a faster, more effective way of identifying infected cattle.

Mossman Farm near Llangrannog, Ceredigion has lost more than 300 cows over the last three years.

Wales' chief vet has given permission for the experimental test to be tried out on the remaining herd. 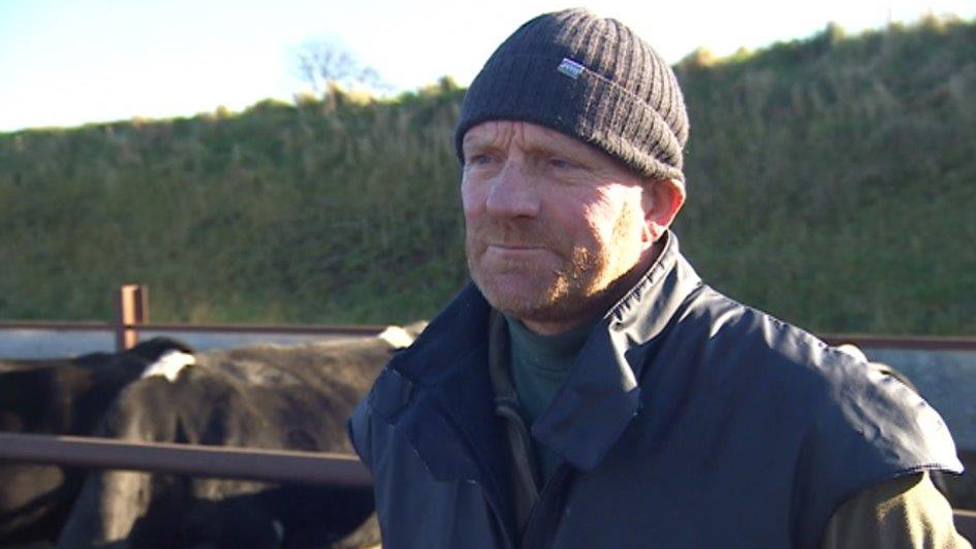 TB testing is always a real stress on everybody, a big operation

Describing the moment he was first told one of his cows had tested positive for TB, farmer Chris Mossman said "quite literally your stomach falls through the floor".

"You know things are going to change dramatically, but even then I could never have guessed how significantly it would have impacted on our business and not just our lives but the lives of our staff.

"No-one wants to get onto a sinking ship every morning and that's how it feels when we're constantly losing animals - between 25 to 35 every test."

He is now paying to try out the new test in the hope it will lead to fewer cattle being removed.

Known as Actiphage, it can detect the presence of bTB bacteria directly in the animal's blood or milk, within a matter of hours.

Current tests used on cattle look instead for an immune response - which is not always as obvious.

It means that at the moment some diseased cows slip through the net, continuing to spread infection on farms.

To try to get on top of the situation, the Welsh Government has insisted that all animals with inconclusive results from farms with long-standing problems have to be removed.

Farmers say this means significant numbers of potentially healthy animals are being culled.

Mossman Farm is the first in Wales - and one of only a handful across the UK - to trial Actiphage.

The developers, Suffolk-based agri-tech firm PBD Biotech, said they wanted to work with other Welsh farms in TB hotspots as they attempt to get the test validated by the World Organisation for Animal Health (OIE).

It could then be adopted more widely as part of the government's TB eradication strategy.

Farm vet Robert Price-Jones from Llandysul, Ceredigion is preparing a paper on the findings from the Mossman Farm trial, to be published in early 2020.

"The potential here is to be far more certain of test results. When you can show that there's bacteria present in the animal's blood you're 100% sure it has TB," he said.

"We tested 30 cows that had just come up as negative on the normal skin and blood tests and found that over half were in fact positive.

"It offers some hope to vets because at the moment we often feel like we're fighting against this disease without seeing much improvement across the country.

"This offers us a way forward towards eradicating TB in cattle".

He is projected to win in Nevada's caucuses, putting him further on course to take on Donald Trump.

EastEnders: How well do its stars know the soap?

The Cellist: It's even better than Strictly ★★★★☆

Why Germany’s far-right AfD is blamed over racist violence

The good, the bad and the awkward: US presidents in India

The defector who brought a N Korea K-drama to life

Phoebe Waller-Bridge on Fleabag and feminism

What do young voters want in Nevada?

What do they know about us?