Almost £1bn a year should be set aside by Welsh Government to tackle climate change, a top adviser has urged.

The money could be used for more public transport, insulating homes, planting trees and helping green energy schemes get off the ground.

The Welsh Government said we must "continuously raise our level of ambition".

Environment Minister Lesley Griffiths announced last week that Wales would set a legally-binding target for a 95% cut in greenhouse gas emissions by 2050, after declaring a climate emergency in May.

Ms Howe said she could not fault the level of ambition, but warned more detail was needed about how it would be funded.

"What we can't get away from is the fact that this is going to require some really difficult spending decisions," she told BBC Wales.

"We can't just talk about it anymore - we need to be financing it and acting upon it."

She has launched a 10-point plan for ministers, calling on the Welsh Government to allocate more of its £18bn budget to reducing emissions.

That is in line with recent advice from the UK Committee on Climate Change (CCC), which estimated £30bn of public money would need to be spent between now and 2050 to eliminate greenhouse gases from our economy and way of life. 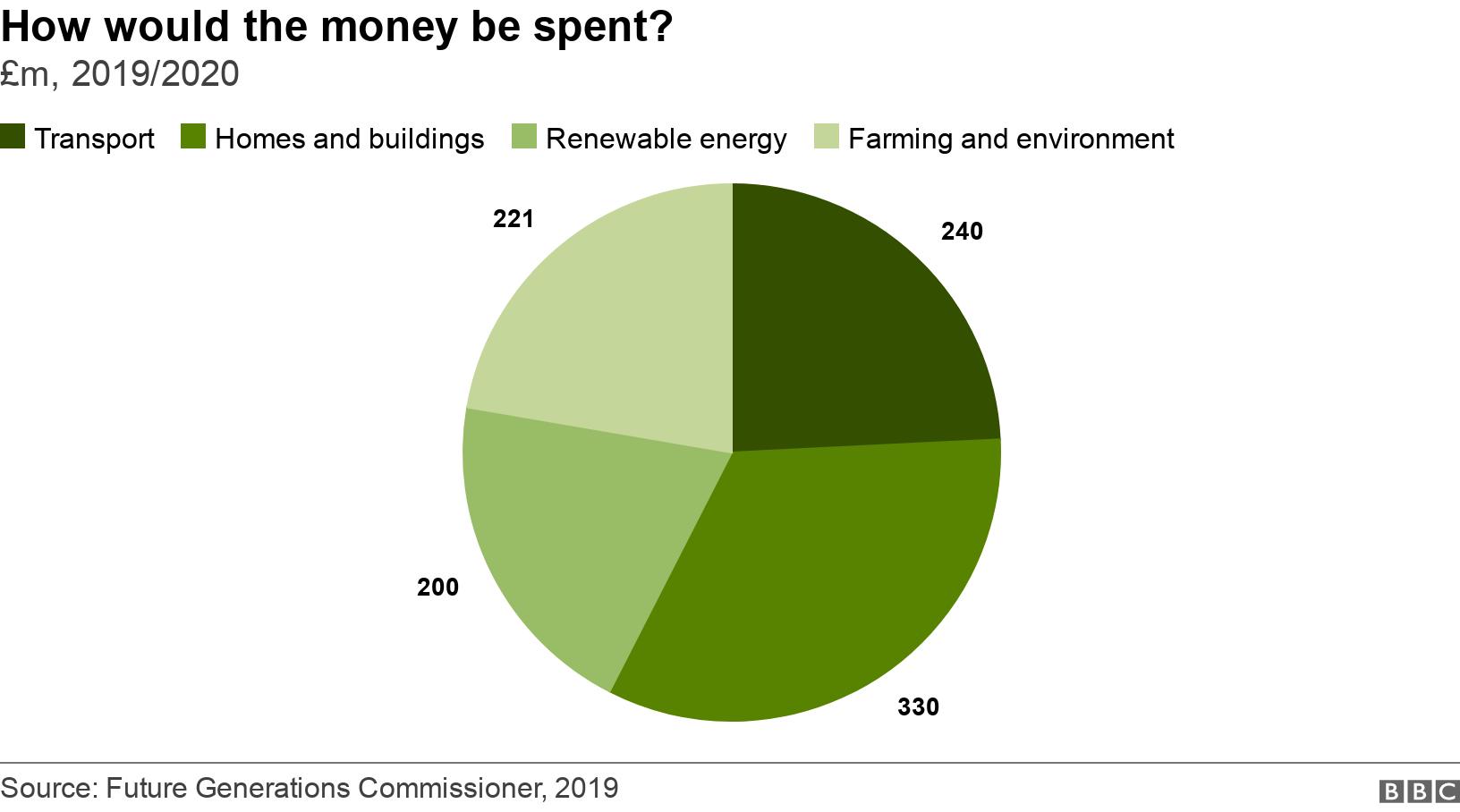 Transport accounts for 14% of Wales' total emissions, with more than half coming from petrol and diesel cars.

Ms Howe's plan sees £240m allocated to greener ways of getting around - with £60m used for walking and cycling infrastructure, and £150m for better public transport.

She said £30m should go on encouraging uptake of low emissions vehicles - though this could be met by a mixture of public and private investment.

HOMES AND BUILDINGS - £330m in the next budget

The plan says all new homes built here should be zero carbon from 2020.

For the last three years, the Welsh Government has given £30m a year to support innovative housing schemes and Ms Howe said this should continue.

The bigger challenge is retrofitting existing housing stock with energy efficiency measures so they use less power.

The focus should be on people living in fuel poverty to start with, costing approximately £1bn per year - with the Welsh Government contributing £300m.

RENEWABLE ENERGY - £200m in the next budget

The plan repeats calls in a recent Institute of Welsh Affairs report for Wales to become 100% self-sufficient in renewable electricity by 2035.

It would require about £30bn of investment over a 15-year period, from a combination of government, private sector and other sources.

It is estimated it could support 20,150 jobs per year across Wales.

The plans see 10% or £200m a year coming from public funding and calls on Welsh Government to "set out urgently how the overall investment will be met".

FARMING AND THE ENVIRONMENT - £221m in the next budget

Looking after the environment has a big role to play in meeting emissions targets as trees, plants and soil soak up and store carbon dioxide.

About £16m a year should be spent on "radically increasing tree cover" in Wales, with the report warning that current planting targets are not being met.

A further £205m a year should go on more green areas and habitats for wildlife in towns, cities and all new building developments.

In addition to the new funding - the approximately £300m a year currently given as subsidies for farmers should be focused in future on supporting low carbon agricultural practices, Ms Howe said.

Which areas of the budget would lose out?

Ms Howe would not be drawn on which areas of the budget should be cut, stating that her plan would be a "starting point for those discussions".

However, she said spending more on climate change could reap long-term benefits such as job creation and savings for the NHS from cleaner air and encouraging people out of their cars. 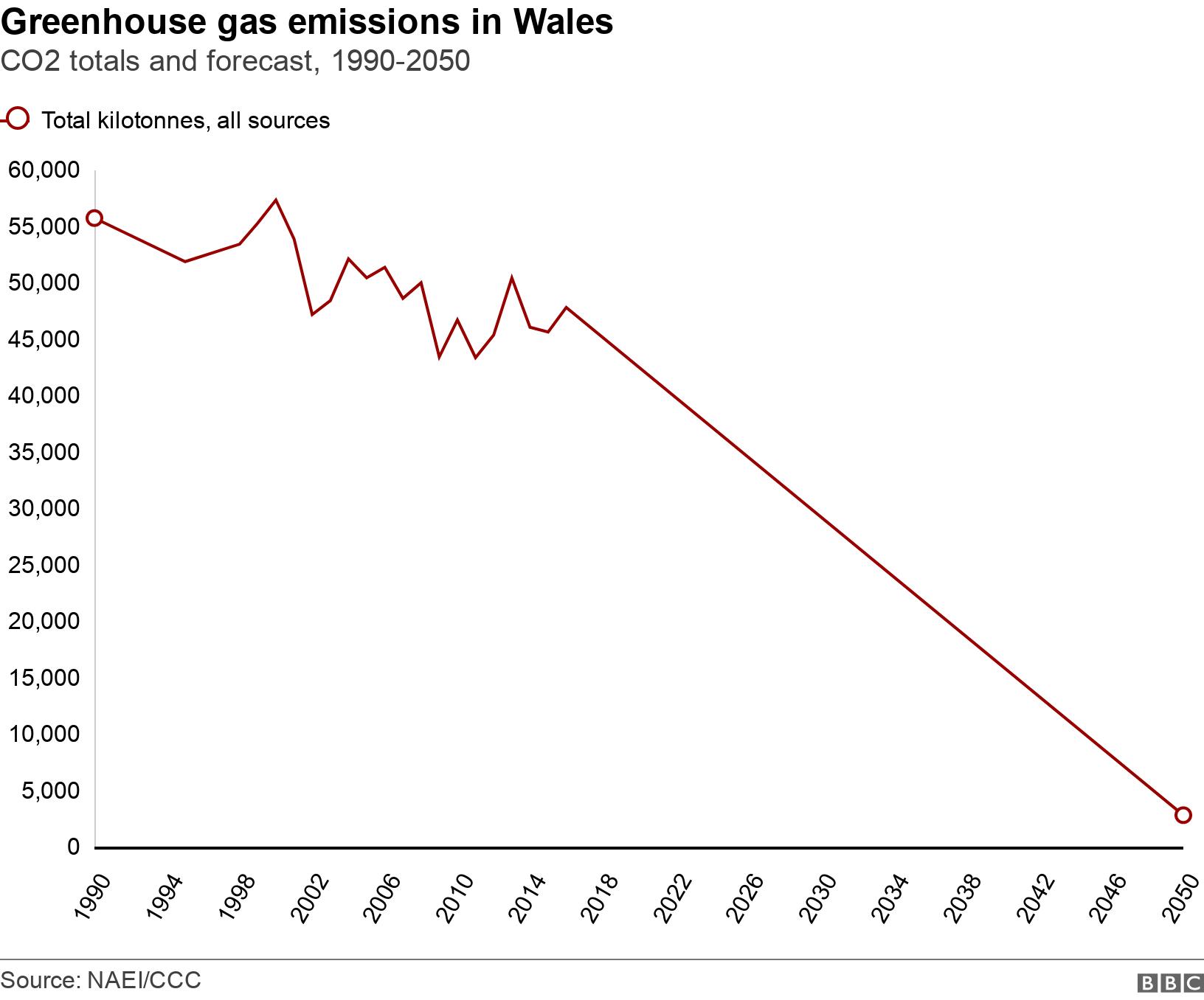 Is Wales on track to meet its emissions targets?

The CCC has repeatedly warned in recent years that Wales is set to miss a goal put in place by the Welsh Government in 2010 for a 40% cut in emissions by 2020.

Last year, the Welsh Government revised its targets - based on new advice from the CCC - and made them legally binding.

Ms Howe said Wales was "lagging considerably behind other countries across the world and indeed in the UK in a number of key areas such as investment in public transport, active travel, energy and re-greening our land".

What does the Welsh Government say?

A Welsh Government spokeswoman said: "It is clear we are facing a climate emergency and we must continuously raise our level of ambition. We have published detailed sector emission profiles and 100 policies and proposals to tackle climate change in our low carbon plan.

"We welcome the contribution of the future generations office to this debate and would encourage all public bodies and communities to consider how they can contribute to tackling climate change. We all have a role to play."