Homeless and unable to work, Heledd Campbell says seeing an advert about extra financial support for part-time students helped get her life on track.

It was the incentive she needed to move back to Wales from London where she had been struggling with her mental health.

Early figures from the Student Loans Company show a 35% rise in the number of students given financial support to study part-time this year.

It follows a 45% drop in part-time undergraduates in Wales over 10 years.

Heledd, 22, from Brynamman, Carmarthenshire has been studying for a psychology degree with the Open University since last autumn.

"I studied after I left school but I ended up dropping out because I had severe depression and anxiety, and I couldn't manage to study and manage my mental health.

"I ended up just kind of coasting along in minimum wage jobs... paying rent in London which was expensive."

"Then my mental health really did take a turn for the worse, and I was signed off work by my doctor because of my depression for a couple of months, before I eventually had to stop working," she said.

"I ended up homeless. I only ended up rough sleeping for I think three nights total out of six months being homeless. Otherwise I just spent it couch-surfing.

"I had very good friends who let me stay with them so we just organised it that way. But otherwise it was a complete nightmare... it was an awful time" 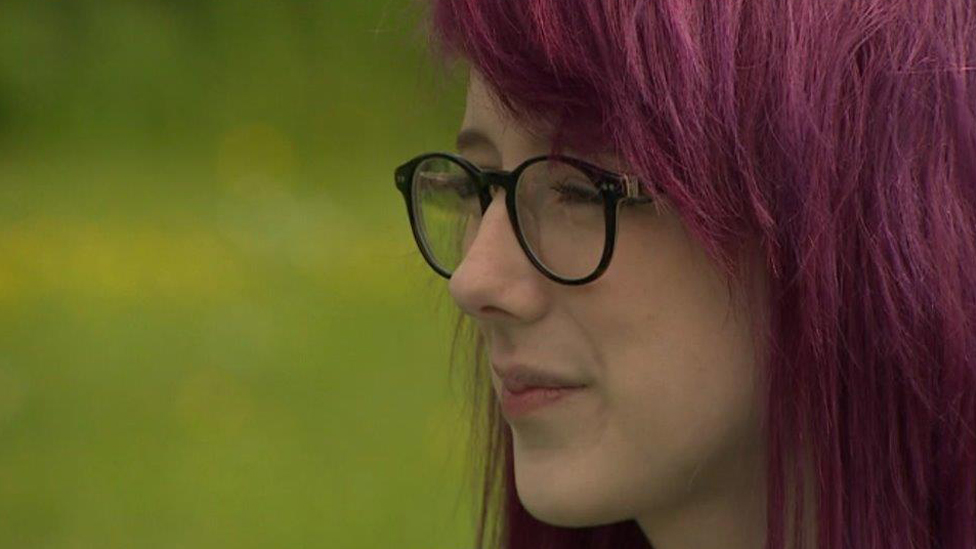 Heledd got in touch with her parents saying she wanted to come home and they helped her with the move back to Wales in summer 2018.

At the same time she applied to study for a degree with the Open University.

"It meant that I could study and work part-time and I could look after my mental health at the same time, so it means that later on in my life I probably will be able to work full time and do something for myself."

She now works part-time as a support worker for young adults with learning disabilities and says the flexibility of her course suits her.

"I can have a bad day and then pick myself up afterwards so the studying is really great for someone like me."

Heledd says she'd like to take her studies further and end up doing a job supporting young people who've had similar problems with their mental health.

"Instead of me working minimum wage jobs and going on to sickness pay and all that sort of stuff it means that I can work now while studying and later I'll be contributing much more," she said.

Final figures on part-time student numbers will not be known for some time but the Welsh Government says the Student Loans Company data is a "vote of confidence" in its student support package.

This year part-time students have been able to claim comparable support to those studying full-time as part of major reforms to student finance.

It includes a means-tested maintenance grant to pay for living costs such as food, books and rent.

The maximum total of grant and loan available is £4,987.50, as well as a loan for course fees.

"Our student support package is the most generous in the UK and the first of its kind in Europe," Education Minister Kirsty Williams said.

"We have always said that high living costs are the main barrier for students when thinking about university.

"Our package of support is specifically designed to address these concerns, making it easier for people to study part-time, especially if they have work or family commitments," she said.

The Open University said it had seen a 40% hike in the number of new undergraduates in Wales in 2018/19.

Ceri Wilcock, assistant director in Wales, said: "We've now got students who are able to access support for maintenance costs and living costs in a way they haven't been able to before and what students are telling us is that's making a real difference to their ability to access education."

Numbers studying all types of part-time courses, not just degrees, have fallen 45% in 10 years.

Former university vice-chancellor Prof Sir Deian Hopkin said the increased financial support had "certainly helped to increase numbers" but a move away from full-time three-year degrees could also be a factor.

Sir Simon Stevens tells the BBC the Covid-19 crisis has shone a "very harsh spotlight" on the sector.

'It feels good to be free and have fun again'