Emiliano Sala plane crash: The story behind the transfer flights

The body representing air charter companies has called on aviation regulators to investigate the series of flights leading up to the plane crash which killed footballer Emiliano Sala.

The Air Charter Association (Baca) has concerns about the nature of the schedule of flights arranged by agents behind the multi-million pound transfer deal to bring Sala to Cardiff City from French side Nantes.

It wants the Civil Aviation Authority (CAA) - which has an enforcement division - to investigate.

Air accident investigators are still looking into why the Piper Malibu plane carrying Sala, 28, to Cardiff for his first training session crashed into the English Channel on the night of 21 January.

The light aircraft was piloted by David Ibbotson, whose body has not been found.

From the beginning of December through to a few days before the fatal crash, a succession of journeys were made between the UK and France by the various parties involved in the transfer deal.

Football agent Willie McKay, who brokered the deal, has said he and his family arranged and paid for these flights.

They were joined on some of the flights by Willie McKay himself and his son Mark McKay - agent to Nantes FC, where Emiliano Sala was playing at the time.

Emiliano Sala and his agent Meissa N'Diaye were also on several flights from mid-January onwards, when discussions about the Argentinian striker's £15m transfer to Cardiff intensified.

What do we know about these flights?

A BBC Wales investigation has found the flights were conducted by three different companies or individuals.

We understand that all were filed on flight plans as "general aviation" - therefore private, rather than commercial flights - and that none flew under an Air Operator's Certificate (AOC)

An AOC is a licence which charter companies obtain from the CAA - for a cost - and which provides a structure for the way they are run, including safety, flight operations, ground operations and maintenance, compliance and training.

Holders of AOCs range from small charter aircraft companies with just a couple of aircraft, to large airline companies, such as Easyjet and British Airways.

Without an AOC, BACA say there are strict regulations around how such a series of flights could be operated legally.

On 5 December, the Cardiff City contingent, along with the McKays, were flown from Stapleford in Essex to Nantes to see Sala play for Nantes against Marseilles.

The plane they flew on - a Pilatus PC-12 single engine aircraft with the registration G-KARE - is operated by a company called Flexifly Aircraft Hire Limited, based in Surrey and linked to a care home provider.

The G denotes a UK-registered plane, which can be hired from the company under a "dry lease" arrangement - whereby aircraft and pilot are hired separately.

Flexifly's website stipulates that any pilot flying the plane must hold a commercial pilot's licence with an instrument rating, have a minimum number of flying hours on the aircraft type behind them and "be approved by the owner before they are permitted to pilot the aircraft concerned".

The next seven flights between 8-18 January - when Sala underwent a medical and signed for Cardiff City - were conducted by Channel Jets.

A legitimate air charter company based in Guernsey, Channel Jets does hold an AOC - but only planes registered in Guernsey can be included on this.

BBC Wales understands that the two jets used to fly various parties including Sala, his agent Meissa N'Diaye, Cardiff City manager Neil Warnock and club player liaison Callum Davies, Willie McKay and his son Mark on seven separate occasions in January did not fall under the AOC at the time.

Both planes were registered in America, which means they cannot be flown commercially in Europe without the express permission of US regulator, the Federal Aviation Authority, and the CAA.

The flights were listed on flight plans, as non-commercial.

BBC Wales has discovered that eight days after the plane carrying Sala crashed, one of these planes was de-registered in the US and re-registered as a Guernsey-based plane.

It was then placed on the company's AOC.

Channel Jets have declined to comment beyond saying they had "provided full details to the CAA".

After Sala had signed up to play for Cardiff City, his agent Mr N'Diaye was flown back to Nantes on 18 January by Lord George Porchester, who flies his own Piper Malibu plane under the company name Altaclara.

The son of the Earl of Caernarfon, whose family seat is used as a filming location for TV's Downton Abbey, he holds a private pilot's licence.

As the plane is registered in the US, it cannot be flown commercially in Europe and Lord Porchester can only fly passengers in the EU on a cost-sharing basis, not for reward.

Lord Porchester has told BBC Wales he flew Mr N'Diaye as a "favour" for Willie McKay and did not receive any payment for the flight.

"I've got my own aircraft and I flew that flight," he said. "There was no financial arrangement at all with anyone, it was a private flight."

He added: "I've been pulled into this because I've done someone a favour."

Why are there calls for a wider investigation?

The Air Charter Association (Baca) feels there are sufficient questions around the way these flights were conducted to warrant an investigation by the Civil Aviation Authority.

While the AAIB is investigating the crash which killed Sala and his pilot, it's the CAA which investigates breaches of aviation regulations and licensing, and takes enforcement action where appropriate. 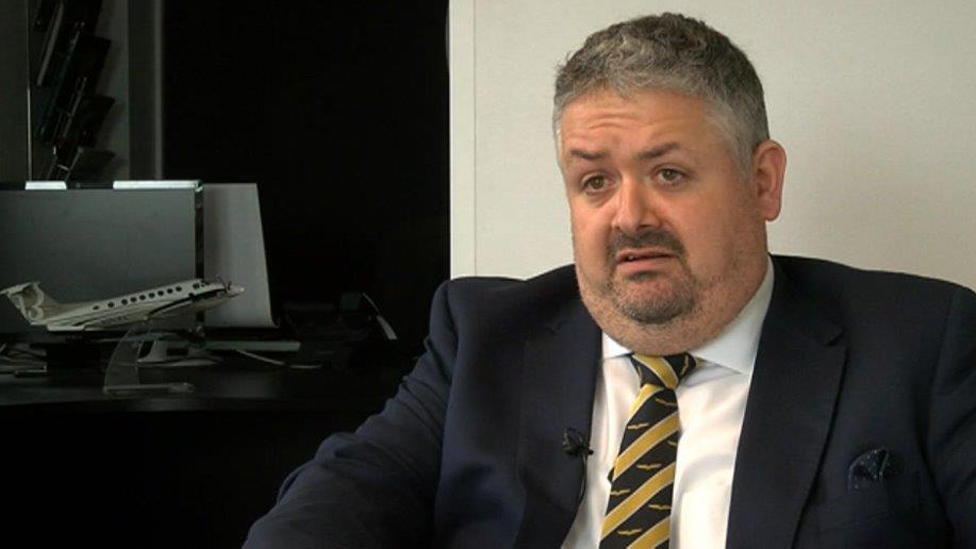 Dave Edwards, chief executive of Baca, said: "We did our research into these flights, we've identified which aircraft they were and the routes they flew, and that gave us rise for significant concern.

"There's enough for us to feel that the authorities need to be looking very closely at this to make sure everyone is keeping the interests of the travelling public at the forefront of their minds."

Mr Edwards said Baca had been voicing concerns about "grey" and illegal charters to the CAA and the European Union Aviation Safety Agency (Easa) for several years.

They've passed their research on the flights connected to the Sala deal onto the CAA.

The demand for such non-commercial flights is driven by cost, he believes, with companies continuing to offer flights while dodging the high cost of air operator certificates and their knock-on effect on customers.

"What we're seeing is a push towards making it more affordable, more attractive to people," he said.

Baca says that the tragedy could prove a watershed moment for the aviation industry, as its longstanding concerns about safety and regulation of the non-commercial sector are pushed to the forefront of the agenda.

"Our industry has always had this line that it would take one famous person to be killed in an aircraft accident for it to come to the fore," said Mr Edwards.

"It's a tragedy, a horrible way for it to have happened, but sadly it's brought it more into the public than just within the aviation industry."

He added that Baca would like to see more prosecutions by the CAA of those who contravene licensing regulations, and stiffer sentences when offenders are prosecuted.

Willie McKay, who commissioned and paid for the flights around the Sala deal, and "aviation broker" David Henderson, who McKay says arranged the final flight which crashed, were both approached for comment on this story.

Is there a precedent for prosecution of those who breach aviation regulations?

A pilot who overloaded a plane which crashed on take-off with three passengers inside was sentenced to three years and six months in prison.

Robert Murgatroyd, from Blackpool, was convicted in February following a three-week trial at Manchester Crown Court.

A jury found him guilty of recklessly endangering the safety of an aircraft and flying without an air operator's certificate, appropriate licence, insurance or flight manual.

Although Murgatroyd, 52, held a private pilot's licence, prosecutors told the jury that he was not allowed to run commercial flights, which in turn rendered his insurance null and void.

The court heard that he had charged three men £500 each to take them bird watching in Scotland in his Piper PA28 aircraft in September 2017.

Murgatroyd, who had several previous convictions for illegally operating public transport flights, had neglected to factor his own weight into the flight plan, causing the aircraft to be "grossly" overloaded.

The plane came down on farmland shortly after taking off, narrowly missing the busy M62 and injuring two passengers.

In addition to a prison sentence, Murgatroyd's pilot's licence was revoked by the CAA.

Murgatroyd had denied the offences, claiming to be a "hero" for saving the lives of those on board.

Senior investigator, Sergeant Lee Westhead, said after the case: "Make no mistake, this could easily have been a truly terrible disaster, all caused because one man saw an opportunity to make a quick buck.

"His passenger weren't to know their pilot was flouting the law and had failed to take the appropriate safety measures."