"As Saudi Arabia is to oil, the UK is to wind" - that's how Boris Johnson described the country's potential to capitalise on renewable energy recently.

For Scotland, it's not the first time comparisons have been drawn with Saudi Arabia.

Back when he was first minister, Alex Salmond said Scotland had the potential to be the "Saudi Arabia of renewables".

With a year to go until Glasgow hosts COP26, a UN climate change conference, BBC Scotland considers how renewable energy has developed.

Why the comparison with Saudi Arabia?

The PM said: "As Saudi Arabia is to oil, the UK is to wind - a place of almost limitless resource, but in the case of wind without the carbon emissions and without the damage to the environment.

"We've got huge, huge gusts of wind going around the north of our country - Scotland. Quite extraordinary potential we have for wind."

So the comparison is a reference to the scale of resources available - Saudi Arabia has a lot of oil reserves and was once the biggest oil producer in the world.

It has since been eclipsed in production by the US but remains the largest exporter.

So could Scotland ever compare?

Well, Scotland is one of the windiest countries in Europe.

So in terms of resource for wind power, there is a comparison to be drawn. And the UK also has plenty space to build offshore wind farms.

But there are challenges to be overcome.

The energy generated by renewable means can't be moved about as easily as oil which can be shipped around the world in tanks.

The development of wind power requires networks to be built to deliver that electricity to where it's needed.

The wind doesn't blow to order, so sometimes storage systems are required as well so energy is available when the need is greatest.

Another approach is to use renewable energy to produce transportable fuels, such as hydrogen, but that technology is still at a relatively early stage of development.

How much of the energy we use is renewable? 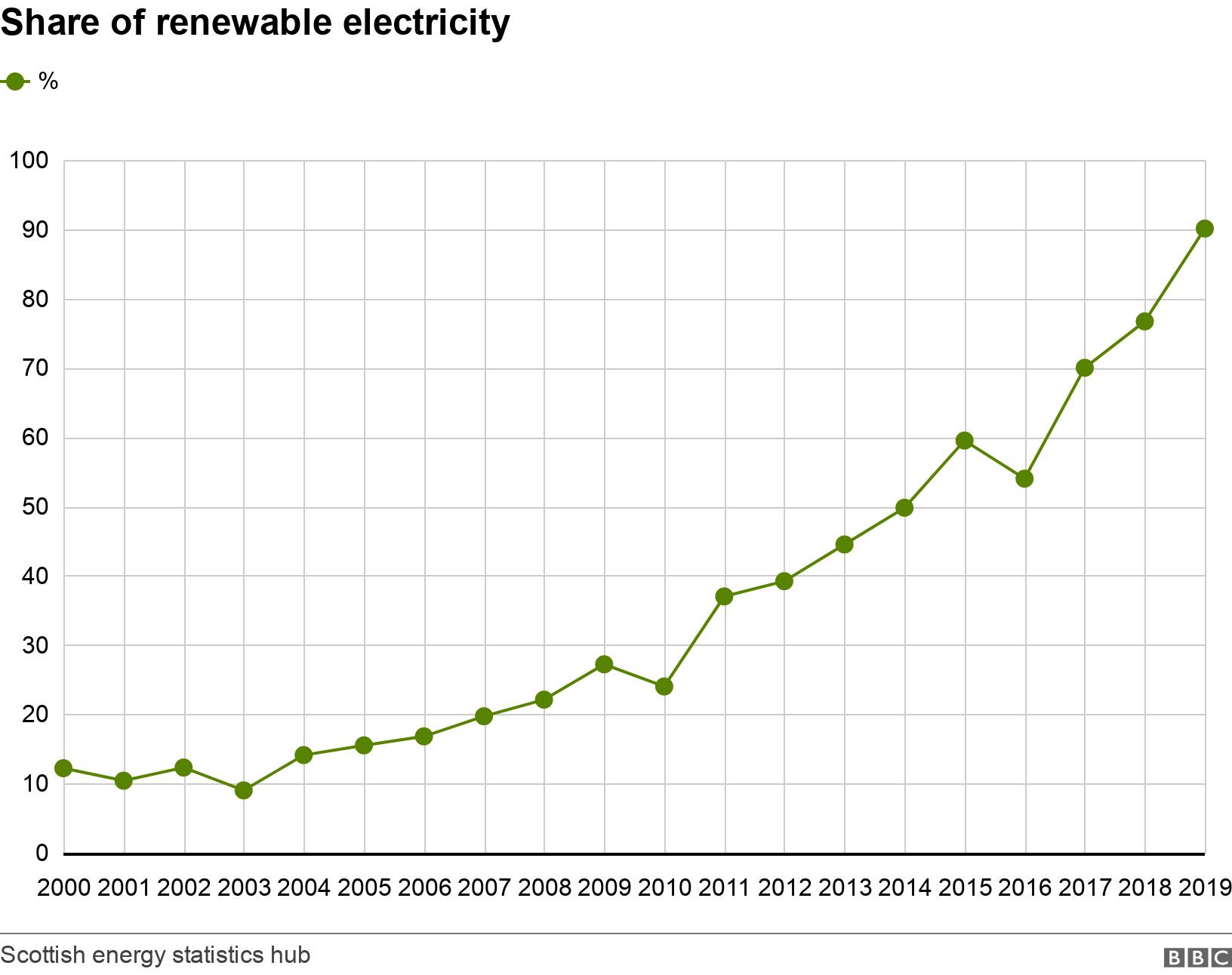 The Scottish government has set a target of having the equivalent of 100% of Scotland's electricity demand coming from renewable energy sources by the end of 2020.

Onshore wind delivers about 70% of capacity, followed by hydro and offshore wind as Scotland's main sources of renewable power.

Scotland's largest single source is the Beatrice offshore wind farm. Its 84 turbines - each with three 75m (246ft) blades - went into operation last year. The wind farm is is capable of generating enough power for 450,000 homes.

The Seagreen Wind Farm, under construction off Angus, will eventually be even bigger and able to power 1.3m homes.

Some argue that Scotland's wind power sector could have been better established by now had it not faced delays in its infancy.

Major offshore wind farm projects were stalled after conservationists opposed the developments over concerns for birds.

And who could forget Donald Trump's opposition to a major North Sea wind power development, on the grounds that it would spoil the view from his Aberdeenshire golf course.

How much more renewable energy does Scotland need?

Given that more than 90% of Scotland's electricity needs are already met by renewable energy, you might think we're most of the way there to providing all the electricity the country needs.

Once that extra 10% is achieved, though, there will still be a way to go.

The whole point of renewable energy is to find an alternative to fossil fuels.

So pretty much all the things that currently use fossil fuels will have to be switched over to greener energy sources - that will massively increase the demand for renewable electricity.

The Climate Change Committee predicts "around a doubling of today's electricity demand" through the transition to electric vehicles and low carbon heating.

How big is the renewable energy industry compared to the oil and gas sector?

Scotland's renewable energy industry has been around for about 20 years, and continues to grow.

While the oil and gas industry has been around for more than 50 years, production peaked in 1999 and has been falling since.

When it comes to their economic impact, renewable energy was worth £3.3bn in added value to the Scottish economy in 2018, while oil and gas extraction from Scottish waters with the support industry around that was worth £11.6bn.

When it comes to jobs, about six times as many people are employed by the oil and gas sector. It supports about 110,000 jobs here.

While the number of people working in Scotland's renewables sector has grown, the most recent figures available said in Scotland the sector employed 17,700 people.

Producing oil and gas is operationally intensive. Oil and Gas UK estimate that there are about 10,000 people working off shore at any one time.

After construction, the Beatrice Offshore Wind Farm resulted in about 370 jobs a year.

While more jobs are involved in construction, often Scotland loses out as contracts are awarded overseas.

Overseas yards are able to build at scale and do it cheaper. They may also gain from government subsidy on a scale which the Scottish government says it isn't legally allowed to provide because of state aid rules.

What about tidal power?

Before highlighting Scotland's potential to harness renewable energy in general, Alex Salmond was saying (back in 2008) that Scotland could be "the Saudi Arabia of tidal power".

But the promise of tidal power has struggled to come to fruition.

Today, it still has some big challenges to overcome before it contributes energy to the grid in a meaningful way.

However, there is one tidal generator that has shown promise - it generated more electricity in its first year than Scotland's entire wave and tidal sector had produced before it.

When the oil came in the 60s and 70s it was like all Scotland's economic Christmases had come at once.

In no time at all an entire industry had grown from the black stuff and in the North East many were living the high life.

However, that windfall for Aberdeen was thanks to a fluke of nature; it was the nearest North Sea port to where the drillers struck lucky.

That's not quite the case with wind. It's everywhere.

But in fact Scotland is one of the windiest places in Europe with one of the largest bodies of sea.

And so the potential for offshore wind far exceeds what Scotland could consume meaning we're on course to be a net-exporter and putting the nation in the driving seat of this second energy revolution.