First Minister Nicola Sturgeon has set out Scotland's "cautious" route out of lockdown and her approach over the next few months will be guided by six tests, including evidence that the epidemic in Scotland is controlled.

Using a system outlined by the World Health Organization (WHO), what can we tell about the state of Scotland's Covid-19 epidemic?

When it comes to judging the level of Covid-19 transmission within a community, the WHO uses a seven tier scale ranging from "no active cases", all the way up to a "very high incidence of locally-acquired cases" that are also "widely dispersed".

The Scottish government has previously indicated it wants to get a "moderate" level of community transmission before significantly relaxing any restrictions.

So how far away is Scotland from this goal?

The WHO advises governments to look at their weekly confirmed cases per 100,000 people and then average the figure out over a 14-day period.

This puts the country firmly in the middle of the WHO's CT3 level - a high incidence of community transmission - and well above the "moderate" threshold.

There's been a sustained fall in this figure since the middle of January, but the decline does now appear to be slowing.

The last time Scotland was below 50 cases per 100,000 was at the beginning of October.

It's difficult to compare this rate with the first outbreak in the spring as there was no mass testing earlier in the pandemic.

The percentage of positive tests has almost reached 'moderate' levels

The Scottish government measures the positivity rate by dividing the number of positive tests per day by the total number of tests carried out.

The 14-day average on 24 February was 5.2% - still in the "high incidence" category, but only just above the 5% threshold for "moderate" incidence.

It's worth pointing out that WHO's preferred way of measuring positivity is through "sentinel surveillance", or random community testing, which is not how the Scottish government measures it.

However, the organisation lists overall test positivity as an additional measure if a comprehensive testing system is in place.

The WHO says governments should look at the number of weekly deaths "attributed" to Covid-19 per 100,000 people and average them out over 14 days.

According to this measure, Scotland experienced "very high" levels of community transmission from 15 January.

The rate reached a peak on 3 February and has now gone below the threshold that indicates a "high" incidence of transmission.

A death rate of two per 100,000 people or less needs to be achieved to indicate "moderate" levels.

This chart counts deaths in Scotland within 28 days of a positive test for Covid-19. If the wider definition of all death certificates mentioning the virus were used, the rate would be slightly higher.

The full lockdown in the spring ended on 28 May, although the easing of restrictions was phased over several weeks during the summer.

Figures on Covid-19 hospital admissions are currently available up to 18 February, when the 14-day average of weekly admissions was 11.4.

This figure has more than halved over the last month.

The rate is still in the WHO's "high" level, but it's close to the threshold of 10 cases per 100,00, indicating a "moderate" level of transmission.

What's the risk level in Scotland?

The WHO use a risk uses something called a "risk matrix" which factors in both the state of an epidemic in a country and the local capacity to respond to the outbreak.

So for instance, if Covid transmission is at a moderate level, but there is very limited testing or hospital capacity, then the risk may still be high.

At the highest level, the WHO considers the epidemic "uncontrolled", with an overwhelmed healthcare system and deaths spiralling.

If Scotland's response can currently be judged as "adequate" that would put the country in roughly the middle of the risk scale.

This is where the organisation recommends that schools and businesses can open up, with limits remaining on social and mass gatherings and home working still encouraged.

But given the recent high case and death rates, it's likely Scotland was closer to the top end of the risk scale in January and early February.

With signs that the decline in cases is now slowing, this may have helped persuade the first minister to choose a slow and cautious route out of lockdown.

So far, 1,515,980 people in Scotland have received their first dose of either the Pfizer or Oxford/AstraZeneca vaccine, which is about a third of the population aged 16 and over.

And the good news is there are early signs that even just receiving the first dose has a significant impact on preventing serious illness. 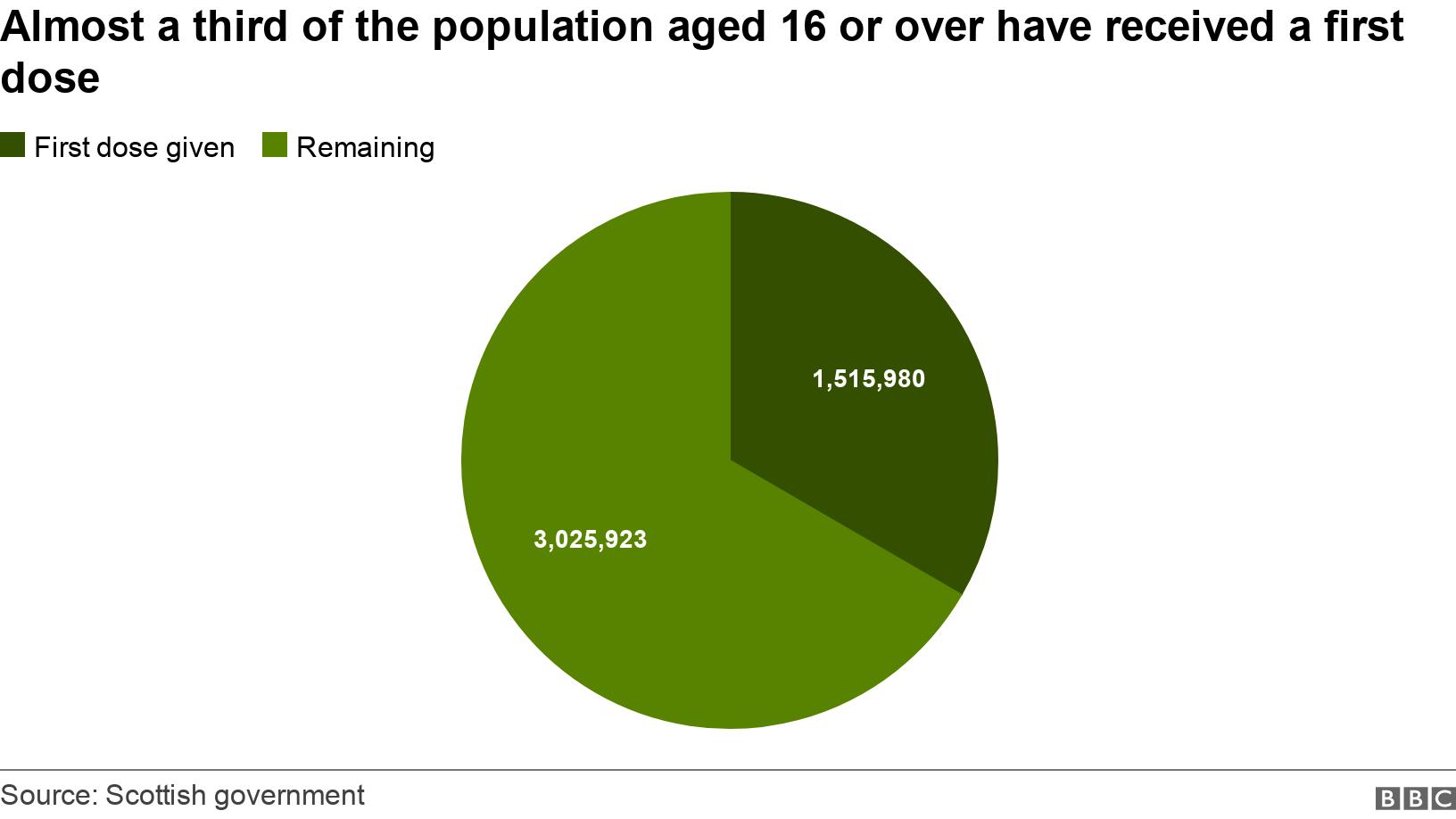 Ms Sturgeon says the aim is to have everyone in this group offered a first dose of the vaccine by the end of July.

But crucially good progress is also being made vaccinating the highest risk groups in Scotland - those who are most likely to become seriously ill or die with Covid-19.

The priority groups were set out by the Joint Committee on Vaccination and Immunisation (JCVI). 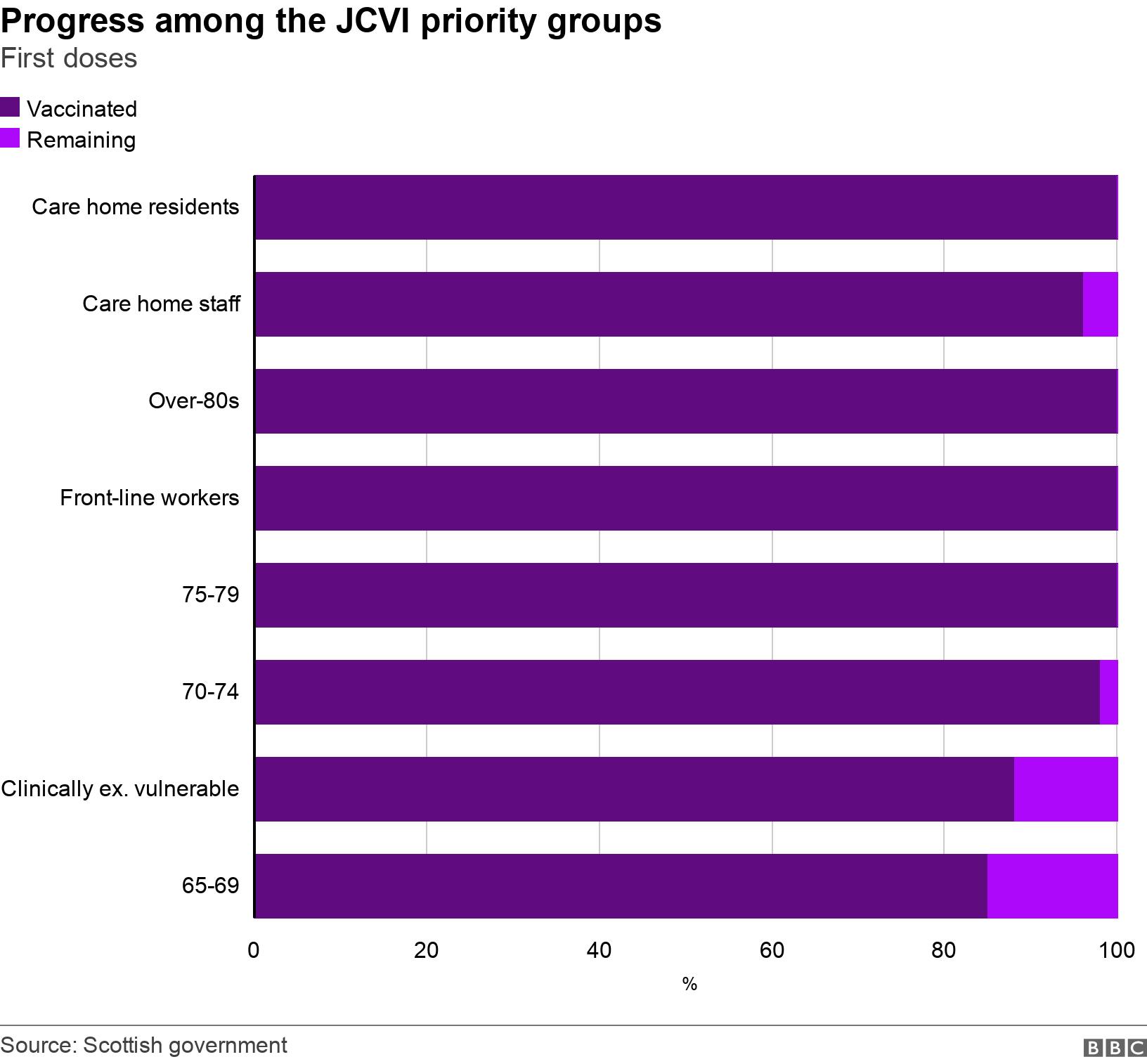 The virus was suppressed to low levels in the summer entirely through public health and social restrictions because there was no vaccine.

This time the vaccine could be a useful tool if the Scottish government does want to take more risks and begin to open the country up faster.

But for now there's every sign the government will stay on its "deliberately cautious" path, allowing the level of risk to drop to the lower end of the WHO's scale.