It is now almost six months since the first coronavirus infections arrived in Scotland.

The number of deaths from Covid-19 dropped to an all-time low of three last week, down from a peak of 661 in mid-April.

But the pandemic continues to have an impact on health, economy and society of Scotland.

How many people have died?

For thousands of families, the most immediate impact of the pandemic has been a death.

While no deaths following a positive test for the virus have been recorded in Scotland for more than a month, the overall total stands at 2,494.

But there are other ways to measure Covid-related deaths which pushes the figure even higher.

The National Records of Scotland (NRS) counts the number of death certificates mentioning Covid-19, which brings the total to 4,222.

The NRS also publishes data on excess deaths, compared to a five-year average.

There have been 4,780 more deaths from all causes than would be expected in the months since the coronavirus outbreak began in Scotland.

According to official figures, Scotland saw the third highest number of excess deaths in Europe by the end of May, though they have now dropped to 8% below the average.

At the peak in the second and third weeks of April, there were 80% more deaths than would be expected at that time of year.

This next chart shows week-by-week the percentage difference between 2020 deaths and the five-year average. 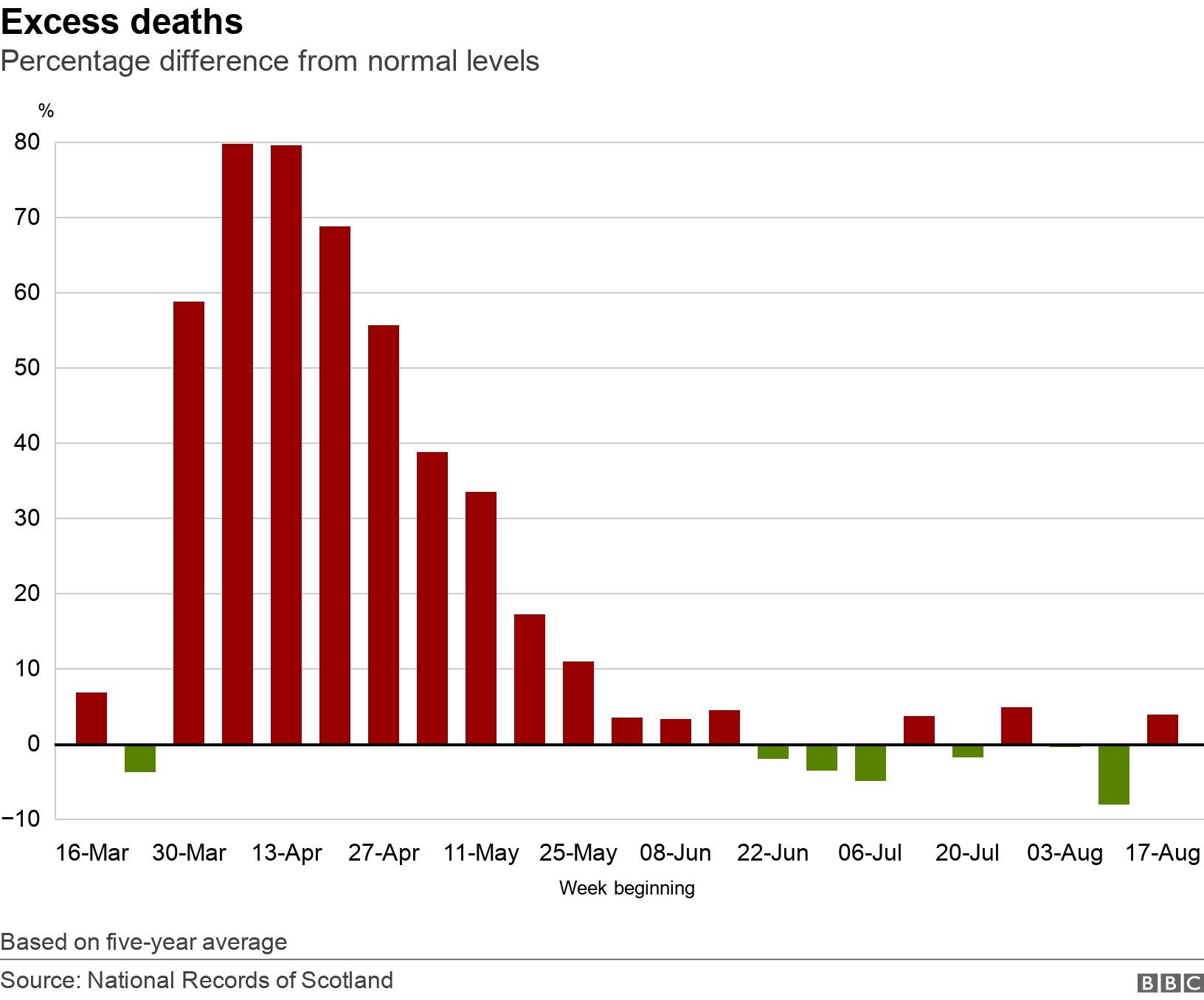 How many infectious people are there in Scotland?

The number of new confirmed Covid-19 cases has risen in recent weeks as several clusters have emerged around Scotland.

But the confirmed cases only represent a proportion of the actual number of infectious people in Scotland.

Any one of these infections has the potential to spark another cluster as lockdown restrictions are eased and fulltime schooling continues.

The Scottish government's current estimate is that somewhere between 125 and 300 people in Scotland are infectious. 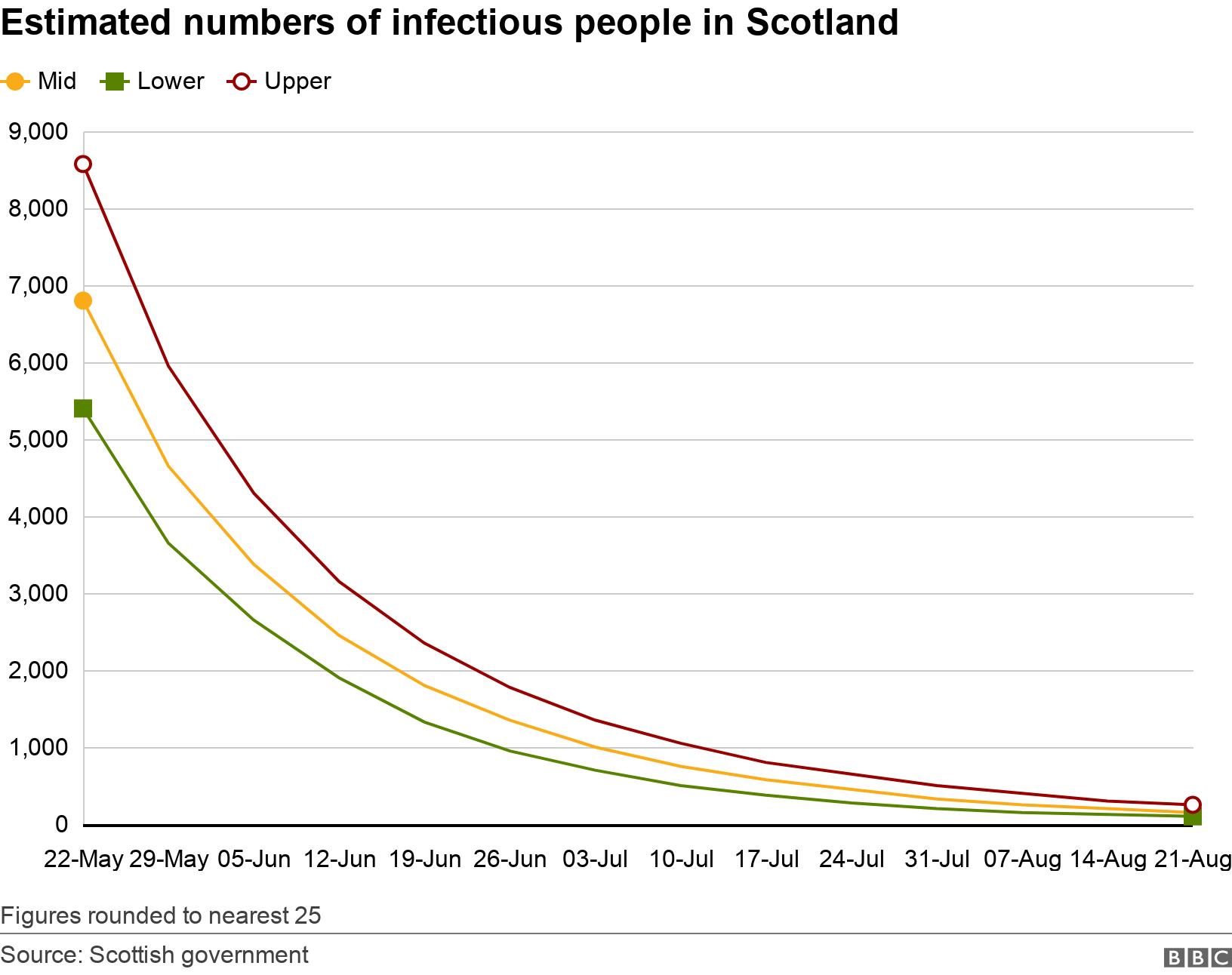 What are the indirect health impacts on Scots?

As the coronavirus pandemic began to grip the country, NHS Scotland was put on an emergency footing, with non-essential treatments and appointments cancelled.

Many paused services have now been restarted, but the outbreak is still having an impact on our behaviour and willingness to access health services.

One way to illustrate this is the number attendances at accident and emergency departments across the country.

These dropped drastically the first week of lockdown on 23 March. They've risen slowly, but are still not back to normal levels. 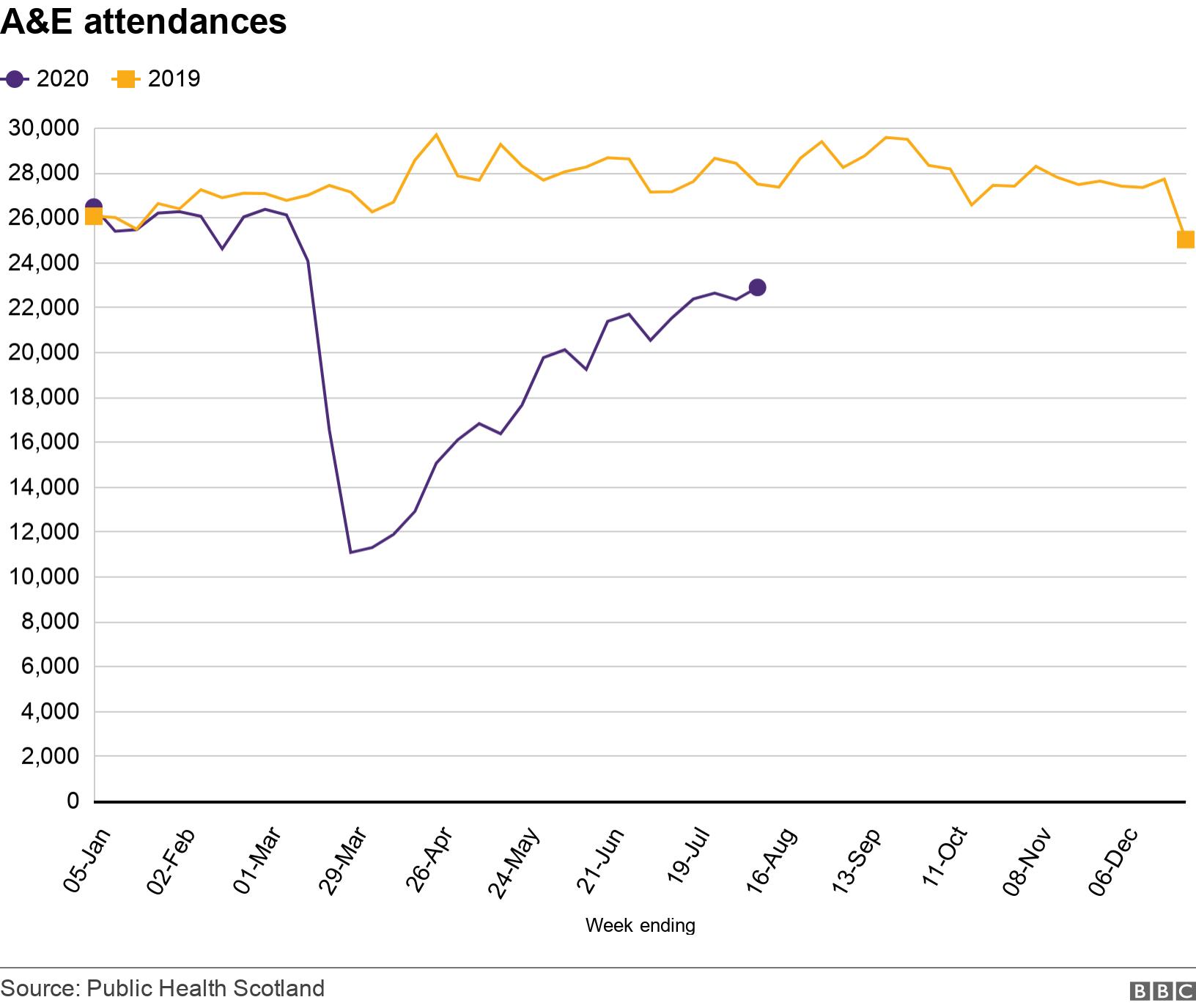 What's happening to the economy?

The Scottish government has created an index which estimates "monthly business turnover" in Scotland.

The index is designed to give an "early indicator" and is based on survey data used by the Scottish government for GDP statistics.

A normal range of turnover is between 45 and 55 on this index.

Levels vary month-by-month, but again the impact of the lockdown is clearly seen - with the latest levels still way below normal in both manufacturing and service industries. 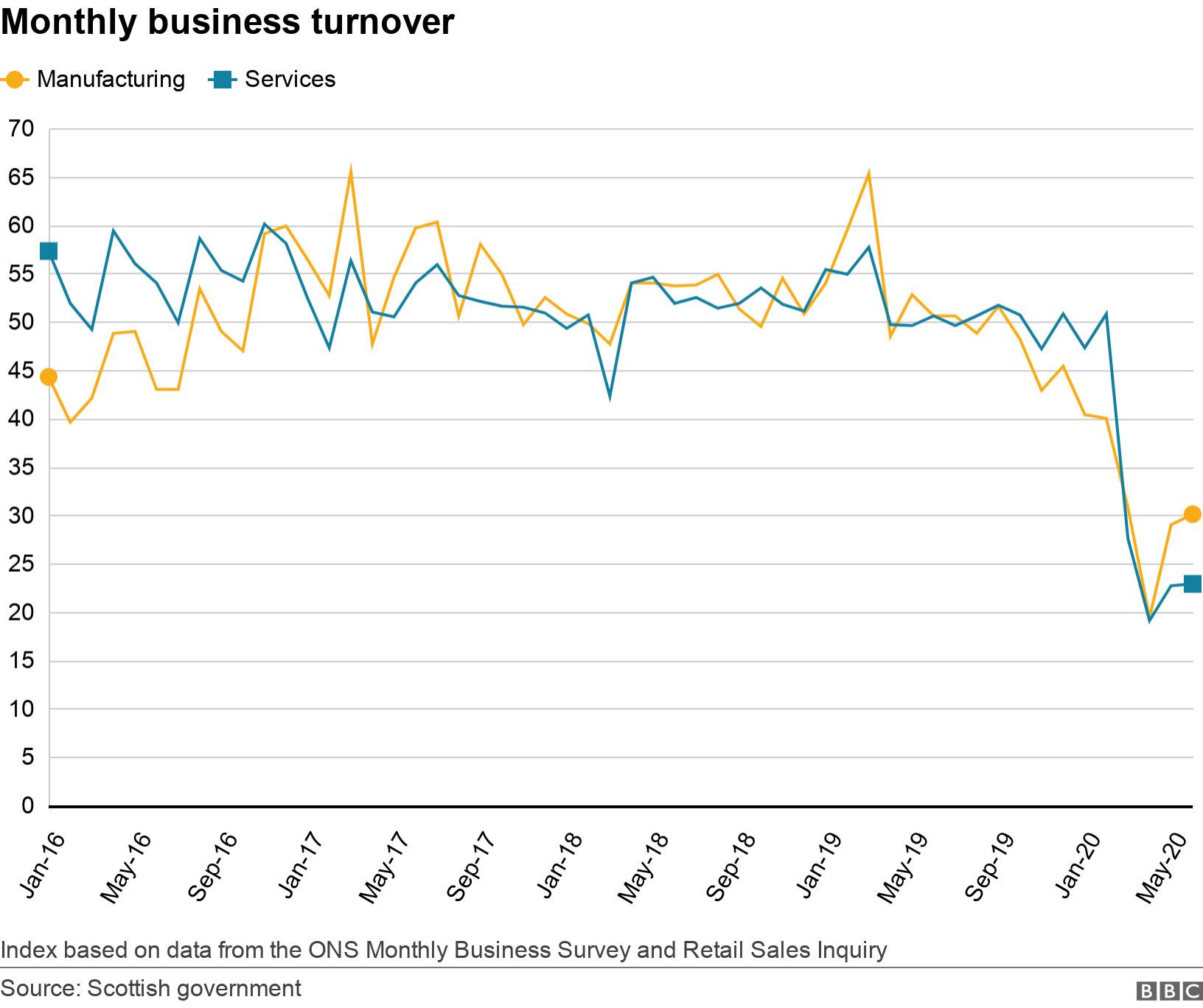 While some businesses are starting to recover, others are still not able to operate at full capacity - or at all.

This has meant a steep increase the number of people in Scotland claiming benefits. 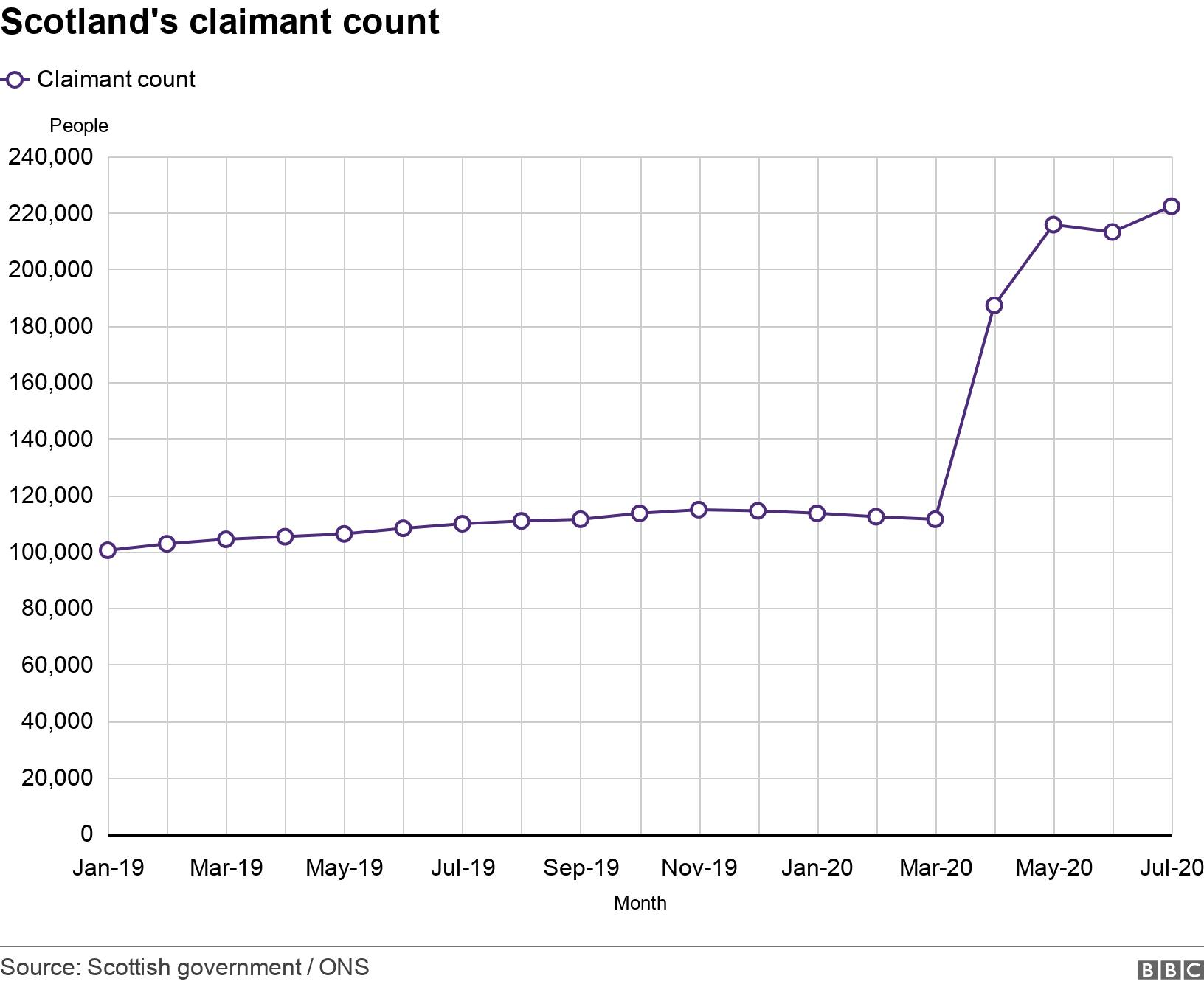