More than 2,000 coronavirus deaths could have been prevented if Scotland had locked down two weeks earlier, according to a new study.

A team of epidemiological scientists at University of Edinburgh produced the findings, which feature in a BBC Disclosure investigation.

They suggest the death rate in Scotland could have been reduced by about 80% with earlier action.

Experts also told Disclosure the UK as a whole should have acted earlier.

The Scottish government said its actions had been guided by the best and most up-to-date scientific advice.

The BBC Disclosure programme, which was broadcast on Monday night, also reveals there were multiple transmissions of the virus in Edinburgh in February, well before the first confirmed cases in Scotland, but this was not disclosed to the public.

And a Glasgow family has told of their devastation after three grandparents were taken by the virus.

'These things keep you up at night'

Wendy Russell and her father, Dougie Chambers, were among several people who fell ill after her 40th birthday party on 7 March.

"I started to think this doesn't look good. When do you ever go to a party and five people all fall ill on the same day?" said Wendy.

Within days 66-year-old Dougie, who had an underlying health condition, went into hospital and tested positive for Covid-19. He died two weeks later.

Lynsey's parents-in-law Andy and Mary Leaman, contracted the virus soon after the party. The couple, aged 73 and 72, died within days of each other.

Lynsey said: "For a nine-year-old girl whose three grandparents were her world… why does a wee girl need to get punished like that over and over again?"

The family say they believe the warnings about the coming pandemic should have been louder in early March.

"And it's these things that keep you up at night."

News of Scotland's first confirmed coronavirus case, in Tayside, was announced on 1 March.

The BBC can reveal the virus had been brought to Scotland the week before.

An outbreak began in Edinburgh on 26 and 27 of February at a conference for the sportswear giant Nike. More than 70 employees from all over the world attended the conference at the Hilton Carlton Hotel.

One of the delegates from abroad brought the virus into Edinburgh and infected many of their fellow Nike employees, who then returned to their own countries. At least 25 people linked to this one event are confirmed to have been infected - eight of them resident in Scotland.

Health authorities in Scotland were aware of this potential outbreak by 2 March, but the public were not told about it. Nike closed many of its stores around the UK and worldwide for deep cleans.

Nike told the BBC it instigated enhanced measures, including contact tracing and increased cleaning and disinfection processes in their stores and offices, and that all its staff had now recovered.

The Scottish government confirmed health authorities were alerted to the potential outbreak on 2 March.

It said those at increased risk were identified, their close contacts were traced and public health authorities were satisfied there was no further infection risk. Those cases resident in Scotland were reported among details of the number of cases in Scotland at the time.

The BBC spoke to one guest who had been staying at the hotel during the conference, who said he had been in close contact with numerous Nike delegates.

However, he said had not been contact traced by anyone from the Scottish health service to tell him about the risk.

'Mistakes have been made'

Despite knowing the virus had been in Scotland since at least late February, Scotland did not ban mass gatherings until 16 March, or go into lockdown until 23 March - the same day as the restrictions were announced by the UK government.

Scotland's own advisory panel - featuring Professor Devi Sridhar, chair of public health at Edinburgh University - was set up two days after the lockdown was introduced.

Prof Sridhar said there had "definitely" been more than enough information about the coming pandemic for action to have been taken much sooner across the UK.

She said: "We should have been acting by mid-February. We could see that this was not easily a virus to be contained."

Professor Dame Anne Glover, who is president of the Royal Society of Edinburgh and the former chief scientific advisor to the Scottish government, said: "Mistakes have been made and that has resulted in lives being lost."

BBC Disclosure asked a team of epidemiological scientists at the University of Edinburgh to model what might have happened to Scotland's death rates if we had locked down sooner.

Professor Rowland Kao and his team developed a model which simulated the epidemiological behaviour of the Scottish population.

It was based on figures which were published by the National Records of Scotland last week, which said a total of 2,795 people had died with a confirmed or suspected case of the virus.

Prof Kao ran simulations to see what would have happened to the spread of the virus if Scotland had locked down on 9 March.

Prof Kao said: "The question we're addressing here is what would have happened if rather than having lockdown on around 23 March, we'd done it about two weeks earlier.

"While… there's quite a bit of uncertainty in what the final outcome will be, all those [projections] are now substantially below what actually happened." 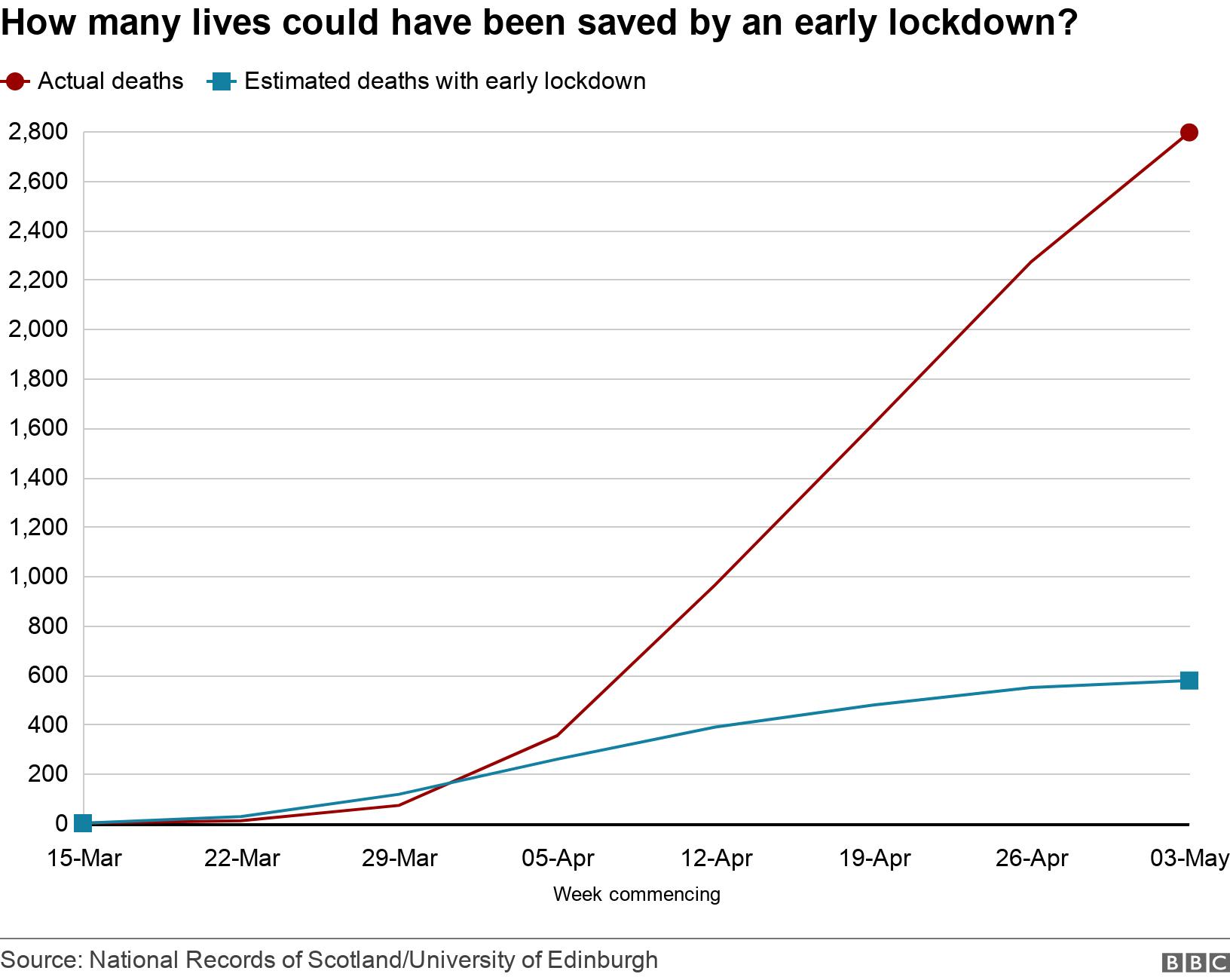 The model, while allowing for uncertainty, predicted the death toll would have been around 577 - about 80% lower than the actual total.

He added: "What that indicates to you is that these measures could have easily taken effect and reduced those death rates."

He said: "I think what that figure represents is the retrospective application of a model to an earlier date from when lockdown started so I don't think the conclusion is particularly surprising, but what we have to look at is the scientific advice that was available to us at the time."

Mr Swinney said the Scottish government acted "promptly and swiftly" on the basis of the scientific advice available and in some respects, such as the ban on large gatherings, was ahead of this advice.

BBC Disclosure: Scotland's Lockdown is now available on the iPlayer.