There have been 18,484 confirmed cases of Covid-19 in Scotland and 2,491 people have died, according to Scottish government figures.

This page is no longer updated. A new daily stats page is available here.

There are three ways to measure deaths from Covid-19.

The Scottish government's daily announcement counts deaths after a positive test for Covid-19, whereas the National Records of Scotland (NRS) counts the number of death certificates that mention Covid-19.

The first coronavirus death in Scotland was reported by NHS Lothian on 13 March.

The way PHS collects figures on coronavirus deaths means there appear to be big drops in the number of deaths over the weekend and on a Monday. However, this reflects a delay in the registration of deaths rather than an actual drop in deaths.

To make the data easier to interpret, this chart also shows a rolling average of the previous seven days of new deaths. 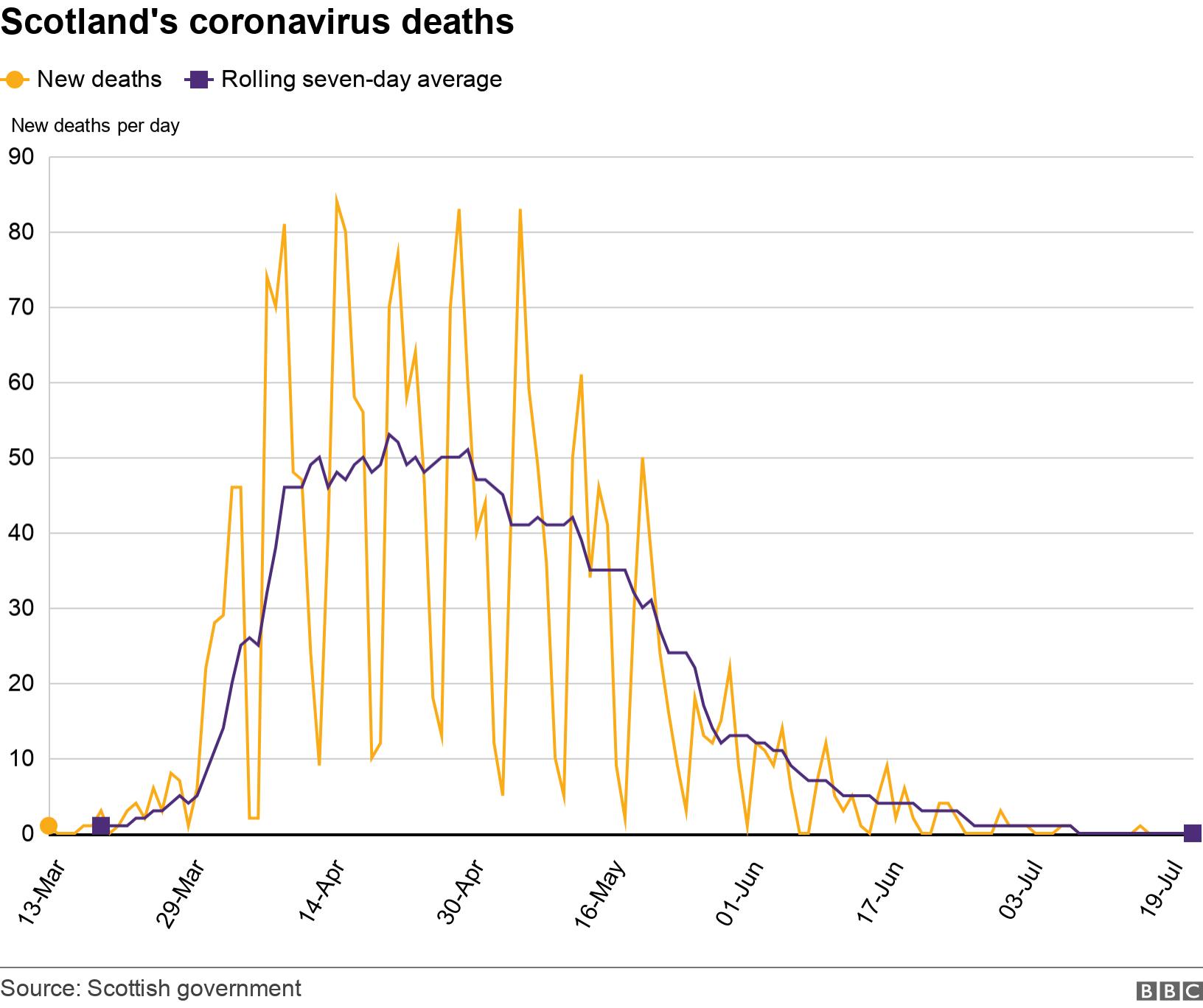 The first coronavirus case in Scotland was reported on 1 March by NHS Tayside, though it is now known there was an earlier outbreak in Edinburgh.

As of 15 June, the total number of confirmed cases includes tests carried out by UK government labs, which include the regional testing centres, care home portal and home tests.

However, the actual cumulative number of infections will be far higher, as most people who have or had Covid-19 are not tested.

This next chart shows how the highest number of new cases confirmed in a day (430) was on 31 March. New cases have mainly been declining since a second peak of 411 on 18 April. 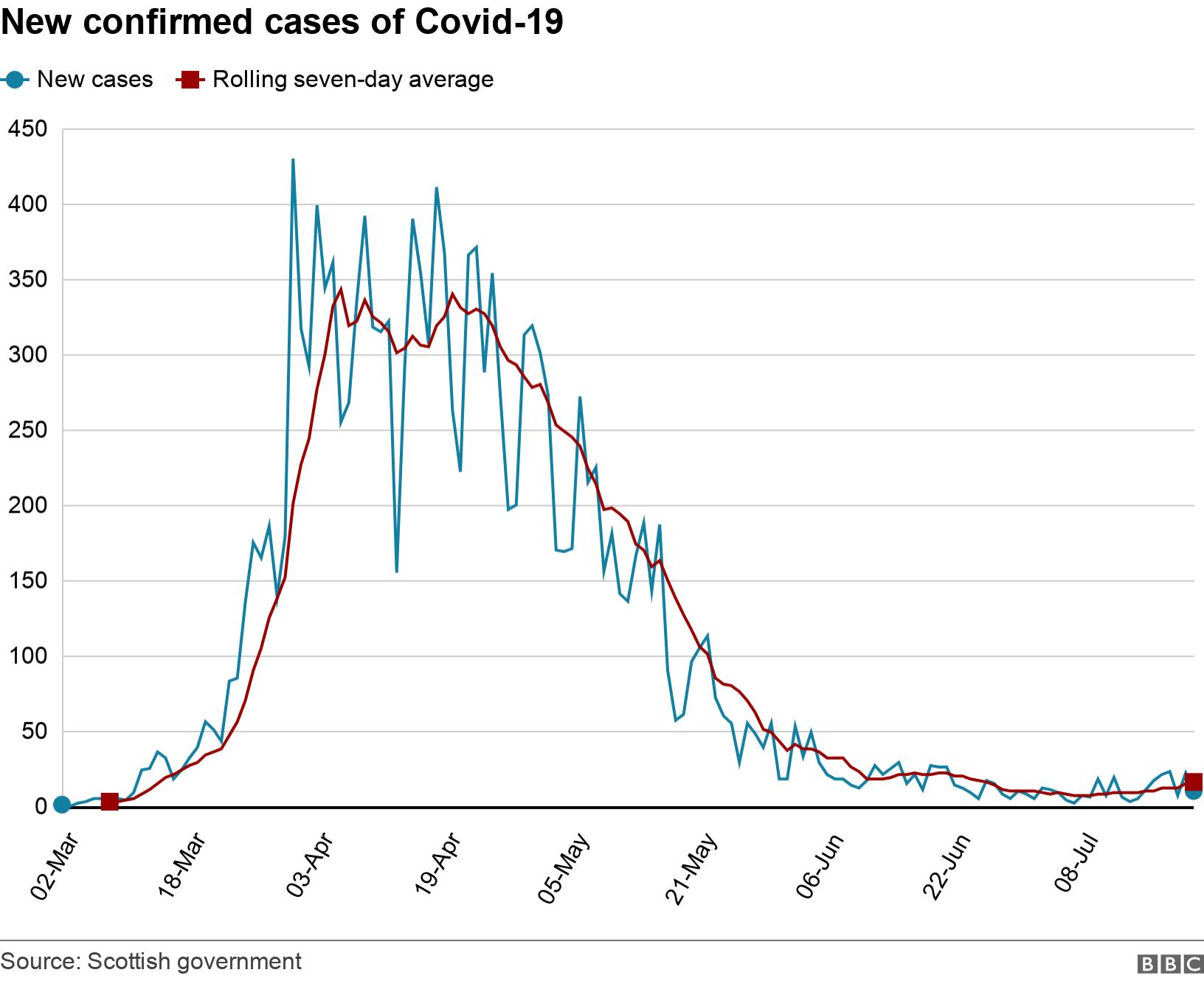 How many cases are there in my area?

The Scottish government gives a breakdown of confirmed cases of Covid-19 by health board.

The highest number of cumulative cases is in NHS Greater Glasgow and Clyde, reflecting the fact it is the most populous part of Scotland. 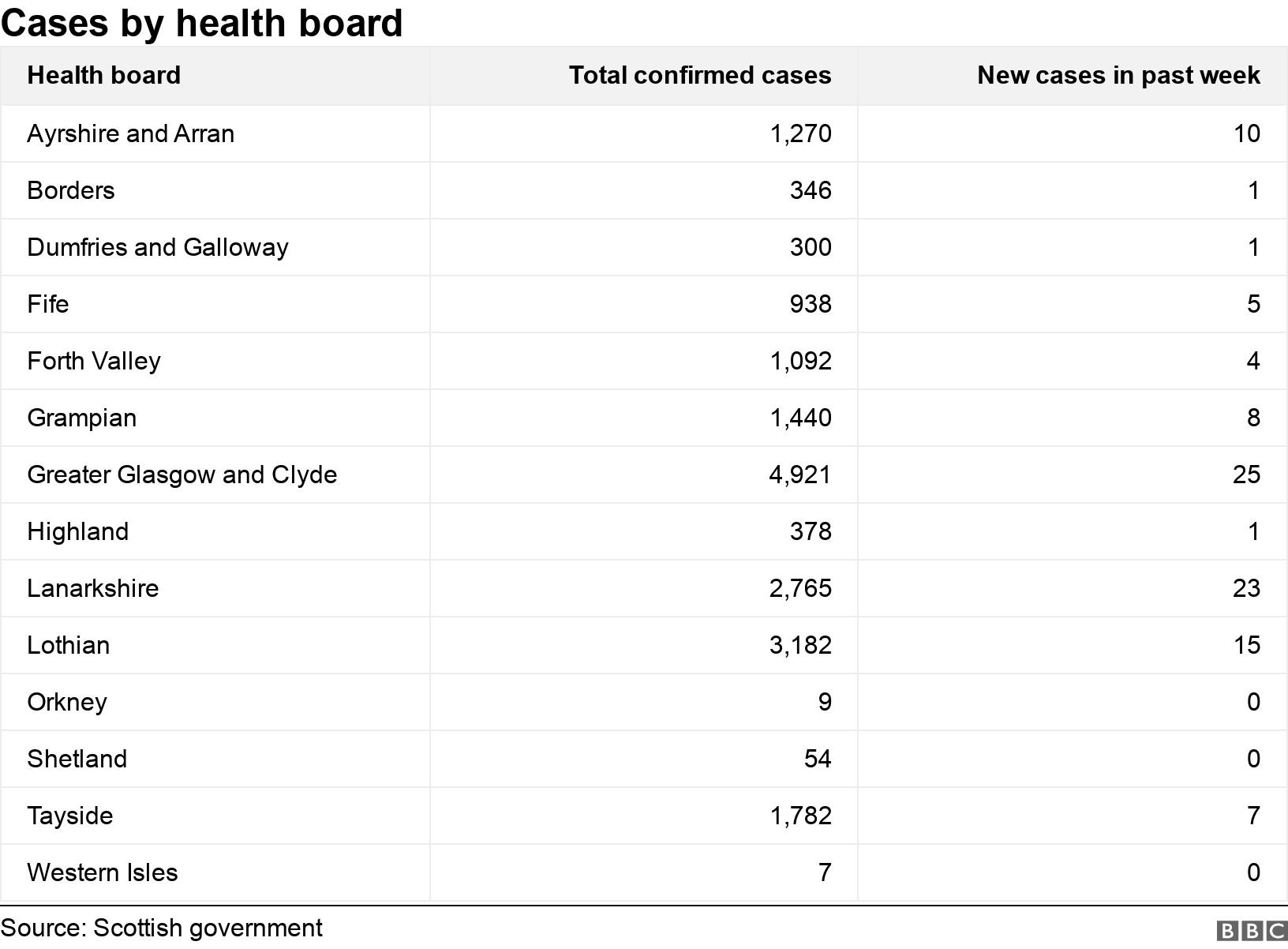 The number of new confirmed cases in Scotland has slowed drastically over the last few weeks, but localised outbreaks are still occurring.

This chart shows a breakdown by NHS health board of the last seven days of cases per 100,000 people.

How does Scotland compare to England?

Public Health England has produced a coronavirus watch list of areas, based on an assessment of incidence rates, and other indicators such as trends in testing, local responses and plans, healthcare activity and mortality.

How many tests are being carried out?

Tests in Scotland are carried out either by NHS Scotland or by UK government labs.

This chart shows the total number of tests each day. 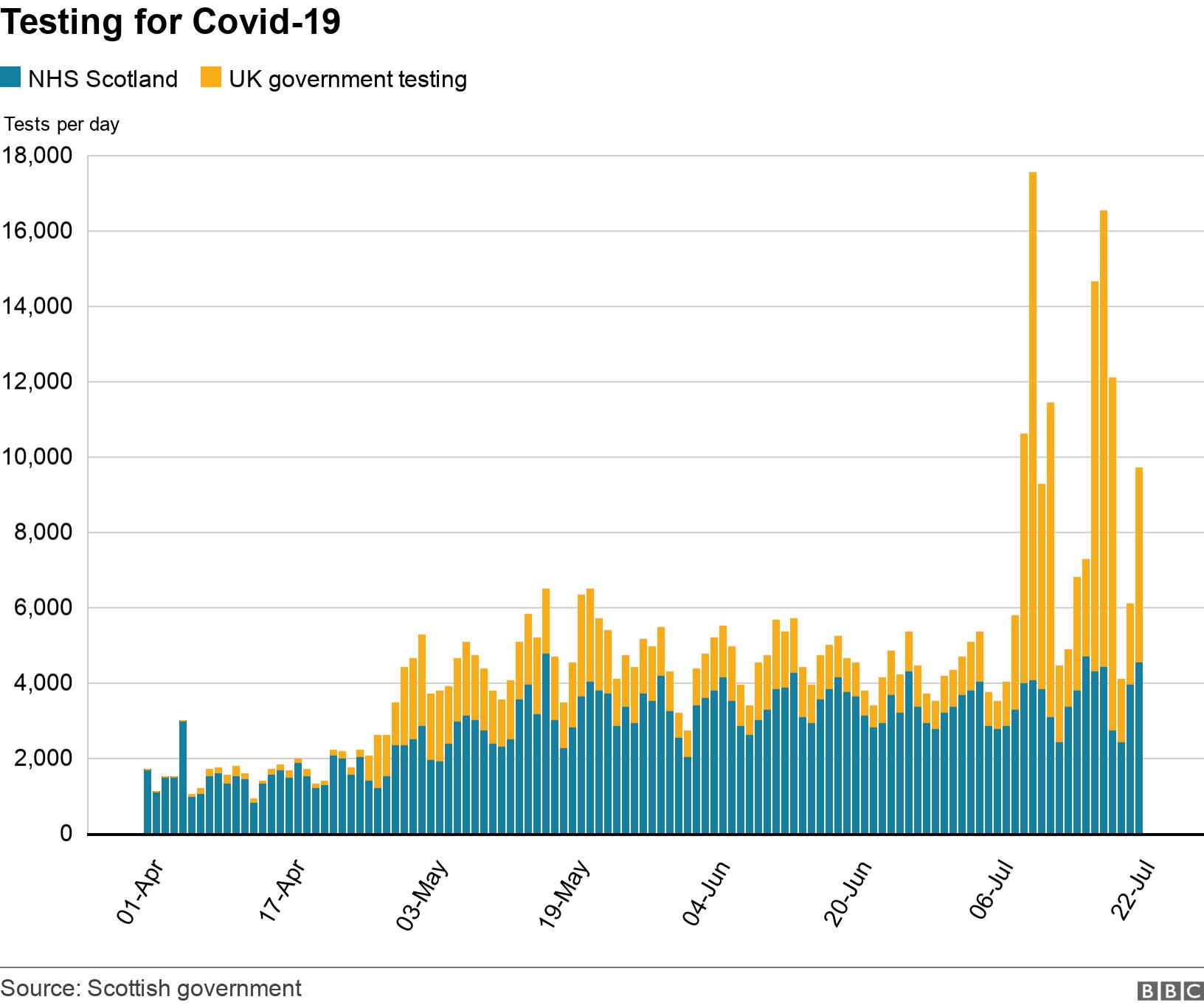 The sharp increases in daily test figures after 8 July are in part because of a backlog of tests - including home tests and those carried out for care homes - from the UK government testing programme which were not previously available.

How has the share of positive test results changed?

Over time the percentage of tests coming back positive has decreased - despite more tests being carried out. This is down to the the prevalence of the virus in the community decreasing.

The World Health Organisation (WHO) says that one measure which can indicate whether an epidemic is under control is whether, with a comprehensive testing system, less than 5% of samples return a positive for Covid-19 over two weeks.

The last time this was above 5% in Scotland was in May. It has been below 1% since 3 June. 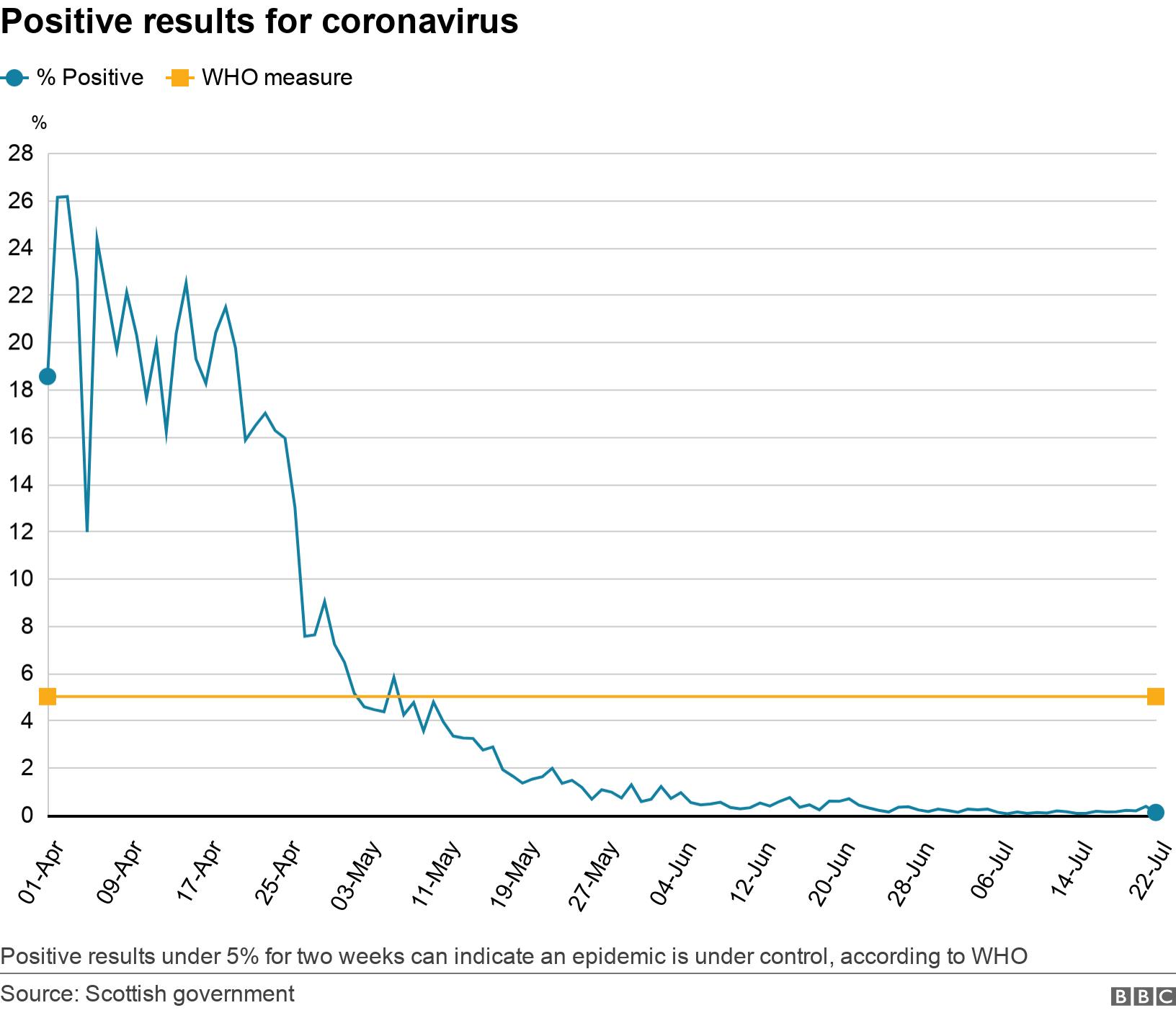 How many people are in hospital?

The coronavirus outbreak created a huge load on Scotland's hospitals and its intensive care unit capacity.

This graph shows the total number of patients with confirmed Covid-19 in hospitals across Scotland. 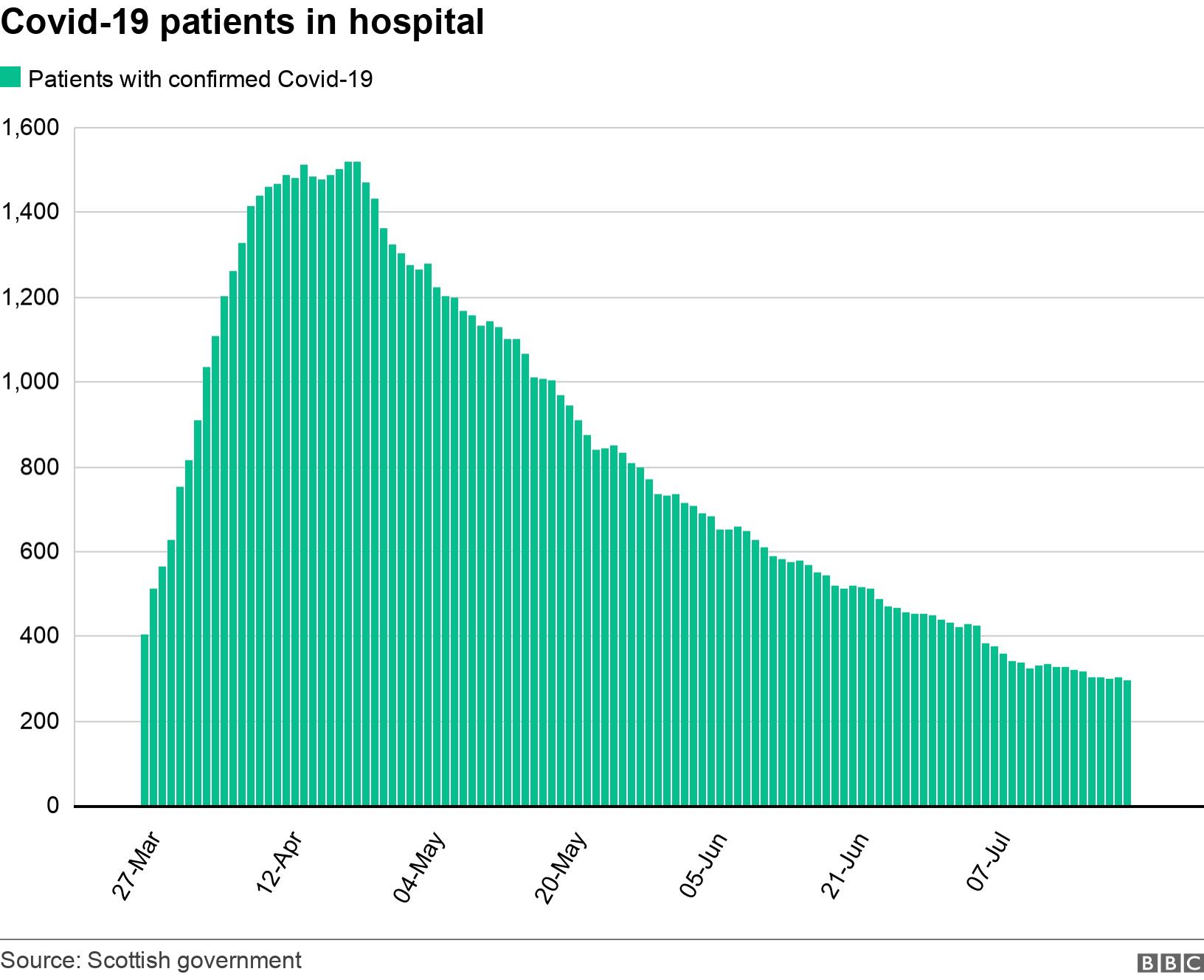 This second chart illustrates how the number of patients in intensive care appears to have peaked on 12 April and has been mainly declining since then. 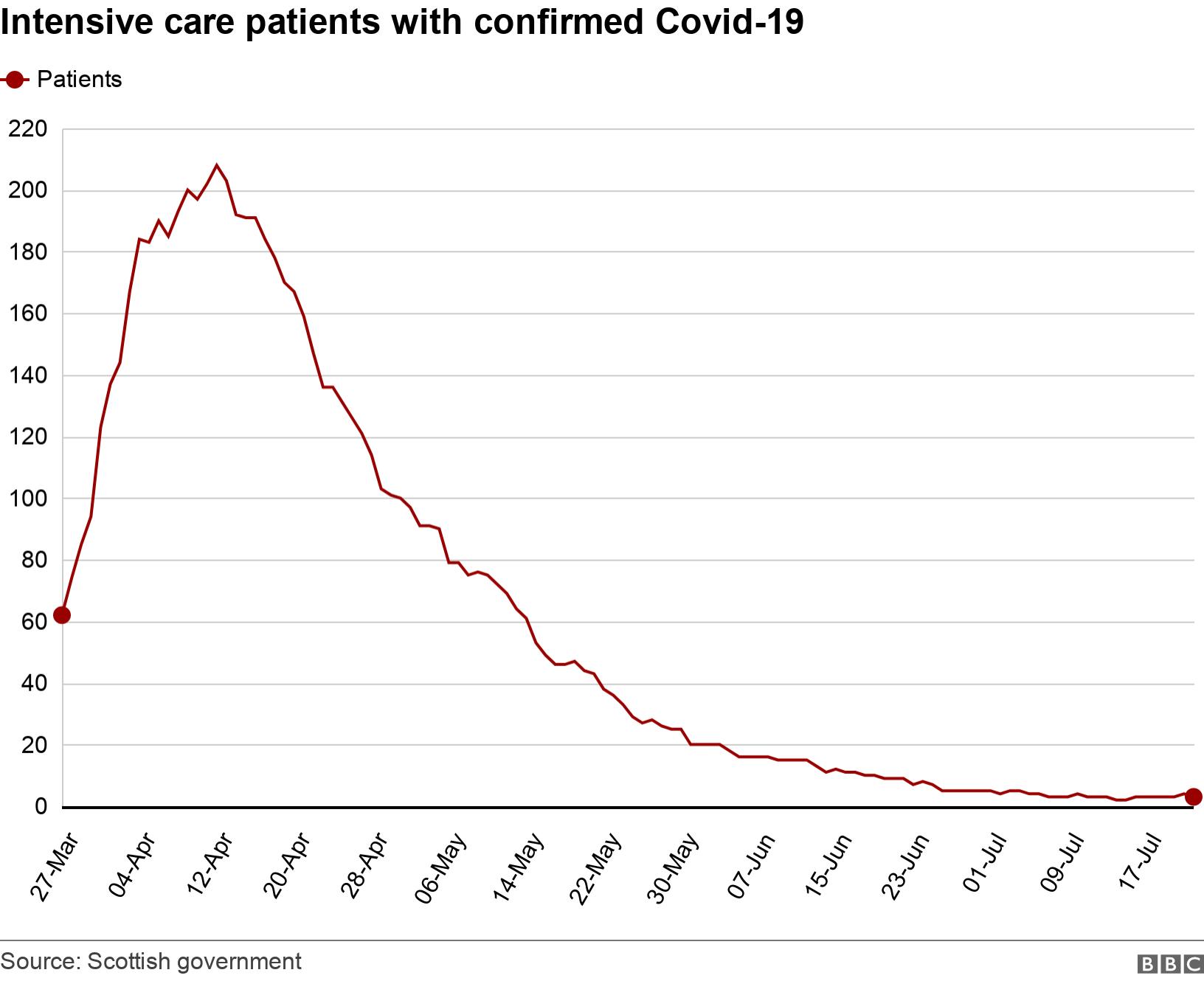 How many suspected cases are there in care homes?

The over-75s are particularly vulnerable to Covid-19 and more than half of all deaths from the virus in Scotland have now been in care homes.

This chart shows how many new suspected coronavirus cases have been reported each day in Scottish care homes since 11 April. 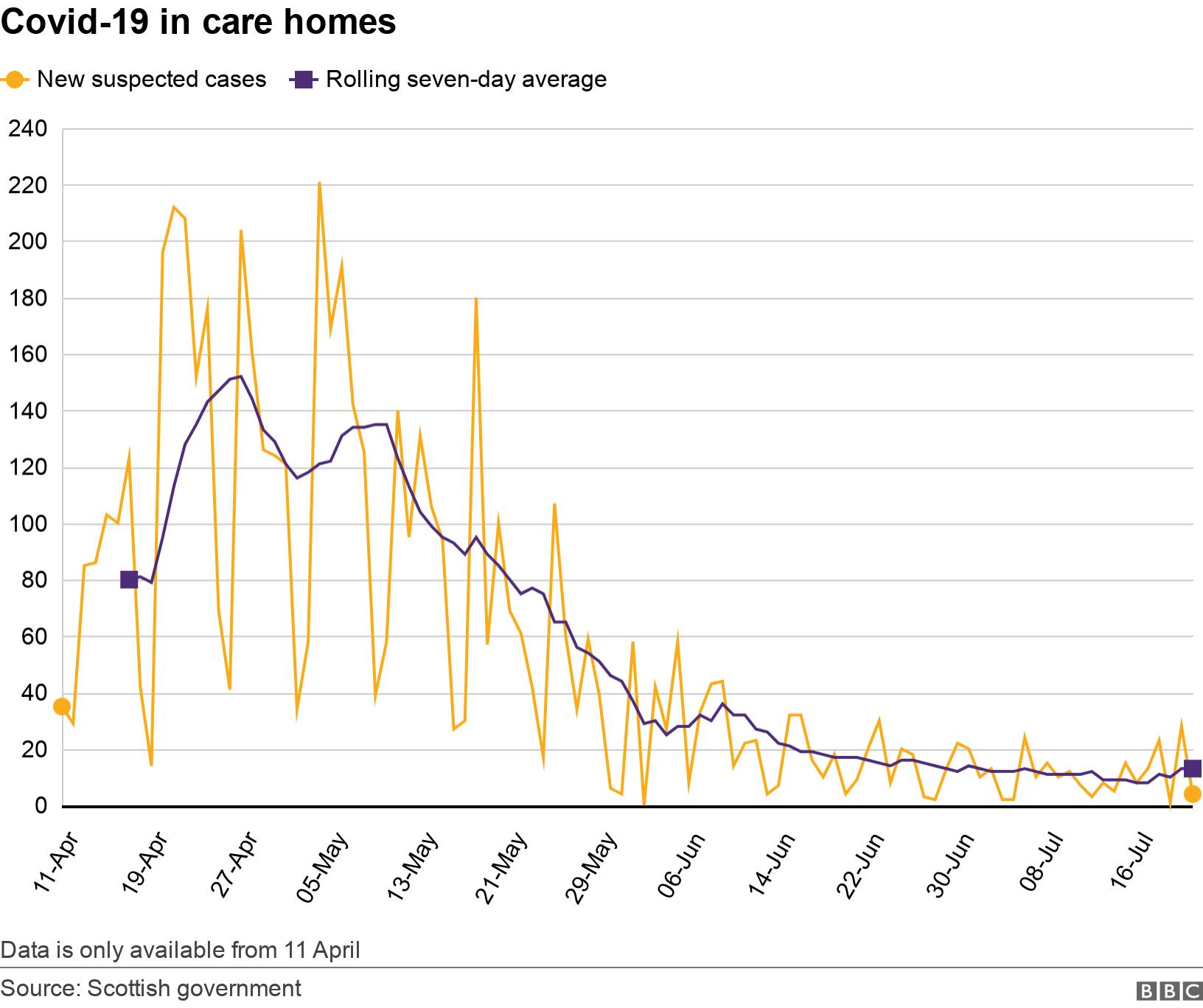 Source for all graphs and figures: Scottish government's coronavirus in Scotland and its daily briefing.