The baton which will visit all 71 competing nations and territories ahead of the Commonwealth Games in Glasgow next year has been unveiled.

Glasgow-based firm 4c Design won the tender to create the Queen's Baton, which is similar to the Olympic torch.

However, only one baton is made, containing the Queen's hand-written message to the Commonwealth. 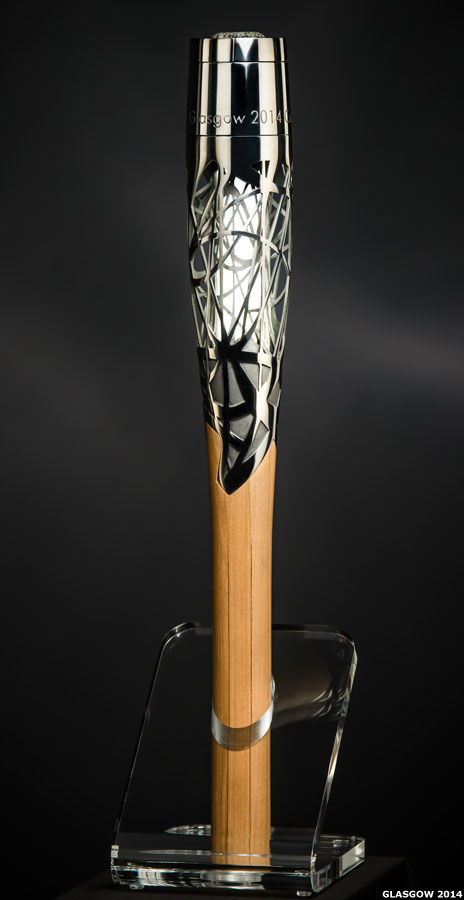 At the top of the baton is a granite ‘gemstone’, which will be given to each nation and territory. The stones come from Ailsa Craig in the Firth of Clyde and have been crafted by Kays of Scotland and jewellers from Glasgow School of Art.

The gemstone can only be removed by opening a clever puzzle mechanism.

The lattice frame is inspired by Glasgow's industrial and architectural heritage. A process called direct metal laser sintering was used to create its organic shape by fusing together layers of pure titanium powder.

Inside the baton is a message from the Queen, written on parchment handmade in Glasgow from linen and plant fibre. Sealed with the royal seal, the message forms the 'visual core' of the baton, illuminated from within by LED lights.

The elm handle is crafted from wood from the grounds of Garrison House on the Isle of Cumbrae, and represents Scotland's natural resources. It was constructed using a boatbuilding technique known as "bird-mouthing", traditionally used to make ships' masts.

The Queen will place her message inside the baton, which makes its first international port-of-call in India on 11 October.

It will then make its journey from Delhi - which was the host of the 2010 Games - through all the nations and territories which are sending teams to the games.

This will include the big Commonwealth countries such as Pakistan, Bangladesh, Nigeria, South Africa, Malaysia, Australia, Kenya, Ghana, Jamaica and Canada.

Some of the smaller destinations include Vanuatu, the Solomon Islands, St Kitts and Nevis and the Falklands Islands.

The baton will also travel to Tuvalu and Nauru, which both struggle to have populations of 10,000 people.

The relay arrives back in the UK in May next year, visiting Jersey, Guernsey, the Isle of Man, Northern Ireland, Wales and England before a 40-day tour of Scotland in the run-up to the start of the games on 23 July 2014.

The final relay runner hands the baton, which contains the sealed, hand-written scroll, back to the Queen at the opening ceremony.

The Queen then reads aloud the hidden message and officially declares the Games open.

The designers said the message from the Queen was pivotal to the baton design and they were keen it should not be "hidden away".

The baton has a lattice design, made from layers of titanium fused together by laser, which means the message is visible.

The parchment, handmade in Glasgow using linen and plant fibre, is also "dramatically" illuminated by LED lights within a transparent cylinder to make the sealed scroll easier to see.

The brief for designers stated that the baton should be easily handed from person to person, should weigh no more than 2kg and must be able to withstand all weathers for the 10-month relay.

The baton's handle is made of elm wood sourced from the grounds of Garrison House on the Isle of Cumbrae and was constructed using a boatbuilding technique called bird-mouthing, which means it is light, strong and durable.

The top of the baton contains a granite "gemstone" which will be detached by opening a puzzle mechanism and given as gift to each nation and territory.

The gems are made of water-resistant granite unique to Scotland and were sourced from Ailsa Craig in the Firth of Clyde.

Glasgow 2014 will be the 20th Commonwealth Games and will feature 17 sports in 11 days of competition, with 261 medal events.

A million tickets will be on offer for the Games, which will play host to 4,500 athletes. The event will be aided by an army of 15,000 volunteers.

The Commonwealth of Nations has 54 members, but 71 teams participate in the Commonwealth Games because a number of British overseas territories, Crown dependencies and island states compete under their own flag.

The UK nations - Scotland, England, Wales and Northern Ireland - compete separately in the Commonwealth Games, as do the smaller home territories such as Jersey, Guernsey and the Isle of Man.

The first Queen's Baton Relay was staged for the 1958 Commonwealth Games in Cardiff and has been the curtain raiser to the Games ever since.

But until 1998, the relay would only travel through England and the host nation.

Melbourne 2006 was the first baton relay to visit all 71 nations which sent teams to the Games.

The Scottish sprinter, who was recently unveiled as a games ambassador, will be one of the first people to carry the baton after it leaves Buckingham Palace.

"Glasgow 2014's Queen's Baton is not only an incredibly stylish object, but is an example of cutting-edge, contemporary Scottish design that tells so many stories about our nation.

"It is a symbol of our friendship and the warm welcome that awaits the Commonwealth family here next year."