Boris Johnson, the UK's new prime minister, was already one of the UK's most recognisable politicians.

His high profile - built up as an MP, London mayor and foreign secretary - has often seen his achievements accompanied by controversy.

As editor of the Spectator magazine and a Have I Got News For You contestant, Boris Johnson was already well known for his shambolic persona.

In 2001, he became an MP, replacing Michael Heseltine in the safe Conservative seat of Henley-on-Thames.

He was considered more liberal than many Tories. As a journalist, he had questioned the repeal of laws banning the promotion of homosexuality by local authorities. But as an MP, he changed tack and said the state should not interfere in people's lives. He also voted in favour of civil partnerships.

In October 2004, then Conservative leader Michael Howard ordered him to visit Liverpool to apologise for a Spectator article accusing its residents of wallowing in "disproportionate" grief after Ken Bigley - an engineer from the city - was kidnapped and killed in Iraq.

And the following month, he was sacked as shadow arts minister, amid claims he had misled Mr Howard about reports of an affair with Spectator columnist Petronella Wyatt. 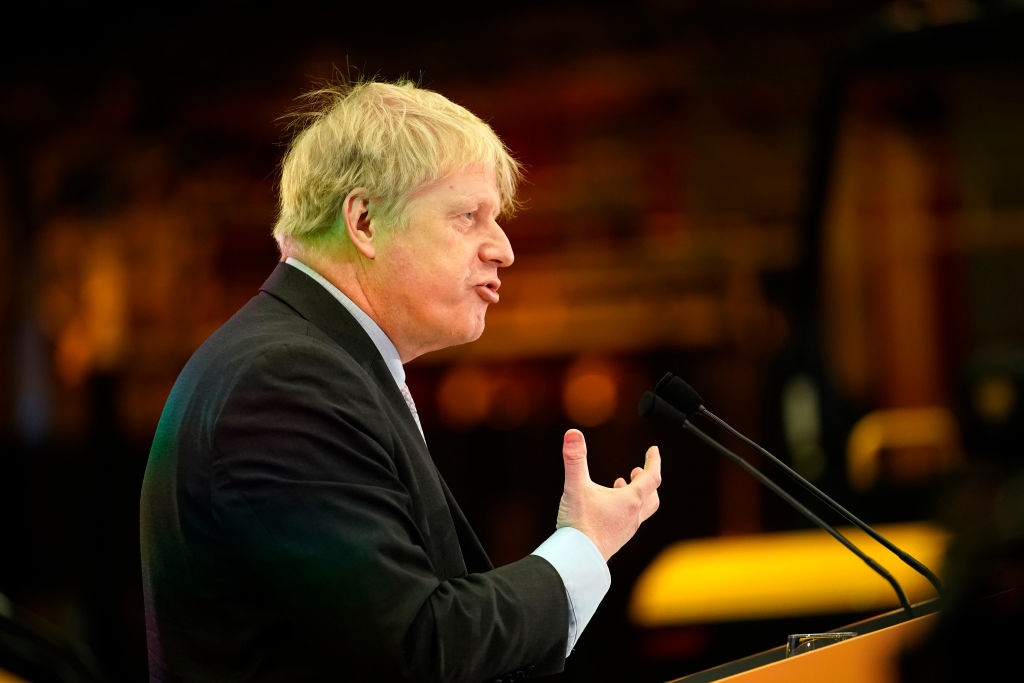 Nevertheless, a year later, he was on the rise again - resigning from his Spectator post when new Tory leader David Cameron made him shadow higher education minister.

However, he continued to write for the Telegraph and had to make another apology - to a whole country - after he linked Papua New Guinea to "cannibalism and chief-killing" in a column.

By 2007, the Henley MP had his sights set on one of the biggest jobs in UK politics.

Taking over from Labour's Ken Livingstone in 2008, Boris Johnson remained London mayor until 2016. It is the longest continuous period of public office that he has held.

He's often spoken of what he considers to be his biggest achievements during that period: on crime, housing and transport.

The homicide rate in London - which includes murder and manslaughter - fell from 22 per million to 12 per million people during his time as mayor. However, it was also falling during his predecessor's second term.

And in the first few years after Mr Johnson took over, knife crime rose by over 15% - although from 2012-13 onwards it started to fall.

Mr Johnson had backed the police use of stop-and-search powers to tackle violent crime. And he said he would ensure police numbers would go up despite central government cuts.

Labour up to 2008 then Conservative
Source: Office for National Statistics

There was an increase in the number of affordable homes built - 101,525 by the end of March 2016, of which the Greater London Authority contributed to 94,001. This was a rise compared with the two terms of Mr Livingstone, although the definition of affordable housing had changed in 2011 so the figures are not directly comparable.

He scrapped the so-called bendy buses - which he said were too big for narrow streets and encouraged fare-dodgers.

In their place, he introduced a new version of the popular Routemaster London bus - a move that was criticised as a vanity project. There were complaints about non-opening windows and problems with the hybrid engines. They also cost considerably more than a normal bus.

One of his most famous transport initiatives was the so-called "Boris Bike" cycle scheme, introduced in July 2010.

Mr Johnson regularly promoted the hire bikes by riding them himself and the number of rentals reached more than 10.3 million during his last year as mayor.

However, critics pointed to the £11m-a-year cost of keeping the bikes on the road. Others pointed out that plans for a bike hire scheme had been announced while Mr Livingstone had been mayor.

As mayor, Mr Johnson became involved in overseeing arrangements for the 2012 Olympics, planning for which started after they were awarded to London in 2005.

One of the most memorable moments was when he got stuck on a zip wire, while celebrating the UK's first gold medal win. The Olympics were widely seen as a success and there were claims that they had provided a major economic boost.

But there were also questions raised about the Olympics' legacy, including criticism of the conversion of the Olympic Stadium into a football ground. In 2017, an independent review said the conversion had cost £323m - far more than the original estimate of £190m.

The latter part of his time as mayor saw a plan to build a garden bridge over the River Thames as a memorial to Princess Diana.

The pedestrian-only bridge, with trees and plants, which was first suggested by the actress Joanna Lumley in 1998, was to be funded by private and public money.

But it was cancelled in 2017, after a review recommended the project be scrapped - £53m had already been spent on the project; £43m of which came from the public purse.

Jeremy Hunt: The other leadership contender

Mr Johnson decided he wanted to return to Parliament before his term as mayor ended, in 2016. He won the seat of Uxbridge and South Ruislip in 2015.

After resuming life as an MP, he declared his opposition to expanding nearby Heathrow airport, saying he would lie in front of the bulldozers.

As London mayor, he had promoted an alternative scheme, for an island airport in the Thames estuary, an idea rejected on cost and environmental grounds.

But Mr Johnson was noticeably absent when MPs subsequently voted on Heathrow expansion in June 2018, as he was on an official trip to Afghanistan.

Mr Johnson had been appointed foreign secretary by the new prime minister, Theresa May, in 2016.

He had also run in the Tory leadership campaign that year but dramatically pulled out after Michael Gove's surprise decision to enter the race.

The job as foreign secretary was seen as an acknowledgement of his role as a leading figure in the campaign to leave the EU.

However, there was also some surprise at the choice, with Lib Dem leader Tim Farron saying he would "spend more time apologising to nations he's offended" than working as foreign secretary.

And there were the disparaging comments about other countries and their leaders - some of which were made before he got the job.

They included a Limerick - which won a £1,000 award in 2016 - about Turkish President Recep Tayyip Erdogan and a goat. And he said the Libyan city of Sirte could be the new Dubai if "they... clear the dead bodies away".

As foreign secretary, Mr Johnson supported a tough line against Russia, with the expulsion of its diplomats after the poisoning of former spy Sergei Skripal and his daughter Yulia Skripal.

Twenty-nine countries, including the US, Canada, Australia and EU states, joined the UK, expelling more than 140 Russian diplomats in a co-ordinated move.

But in the case of British Iranian national Nazanin Zaghari-Ratcliffe, jailed in Iran, Mr Johnson had to apologise in Parliament.

He later clarified that she had in fact been on holiday but has also said he does not believe his remarks made a difference to her plight - a claim rejected by her family.

A few days after Mr Johnson made his remarks, Zaghari-Ratcliffe was summoned before an Iranian judge, to face charges of engaging in propaganda against the regime.

As foreign secretary, he also earned a rebuke from Downing Street, after comments emerged in which he had criticised close ally Saudi Arabia for engaging in proxy wars in the Middle East.

Nevertheless, he continued to allow sales of UK arms to Saudi Arabia, which is involved in a controversial military campaign in Yemen.

In 2018, Mr Johnson also faced criticism after writing in the Daily Telegraph that Muslim women wearing the burka "looked like letterboxes".

By this stage, though, he had left the government, resigning in protest at Theresa May's Brexit plan.

Boris Johnson was a leading figure in the Vote Leave campaign during the 2016 EU referendum.

He became well known for his attacks on the EU and for advocating the benefits of Brexit. He declared that he was "pro-having cake and pro-eating it".

But it hadn't always been clear which side he would support.

In fact, while mayor of London, he'd spoken of the benefits of being in the single market.

And in an article for the Daily Telegraph in 2013, weighing up the pros and cons of being in the EU, he had said that leaving would not solve the UK's problems.

However, he also made clear he supported plans to ask the British people to decide about EU membership.

During the Brexit campaign, he came under sustained criticism from those in favour of Remain, for his claims about the benefits of leaving and what he called "taking back control".

Most controversial was a claim about how much money the UK sent to the EU. The £350m-a-week figure, which appeared on the side of a bus during the campaign, recently led to an unsuccessful attempt to prosecute him. Critics pointed out at the time that the figure was wrong as it did not take into account the UK's rebate, or indeed money subsequently spent in the UK.

For his part, Mr Johnson dismissed warnings that leaving the EU could spark a recession, describing one such study as propaganda.

And he has continued to advocate a harder form of Brexit, sharply criticising both the deal that Mrs May agreed and her whole approach to the negotiations with the EU.

He described it as leading the UK into the "status of a colony", in his resignation letter, in July 2018.

Mr Johnson has continued to insist that the UK can and should leave the EU by 31 October, with or without a deal.

UK faces 50,000 cases a day by mid-October without action

The UK could see 50,000 Covid cases a day by mid-October if the infection rate is not halted - top scientist.

Is it time we learnt to live with the virus?

All you need to know about FinCEN documents leak

One of the world's 'dodgiest addresses', in leafy Herts

What's the secret of Succession's success?

The perils of jogging when you're black

The black-owned coffee firm that became a bestseller

How can I relax?

Full article How can I relax?