The UK will return 73 Members of the European Parliament (MEPs) to Brussels and Strasbourg.

The election happens every five years in EU countries.

Who can vote in the EU elections in the UK?

Voters must be registered to vote, be 18 years old or over on 23 May, be a British, Irish or qualifying Commonwealth citizen or a citizen of an EU country.

You have to be resident at a UK address (or a British citizen living abroad who has been registered to vote in the UK in the last 15 years) and not be legally excluded from voting.

How can I register to vote?

The deadline to register for the EU elections has now passed so anyone who has not already registered will not be able to take part.

What about EU citizens resident in the UK?

If you are a citizen of an EU country and are resident in the UK, you can vote either in the UK or in your home country. In either case, you must have registered before the deadline.

How do the European parliamentary elections work?

Each region has a different number of MEPs based on its population. 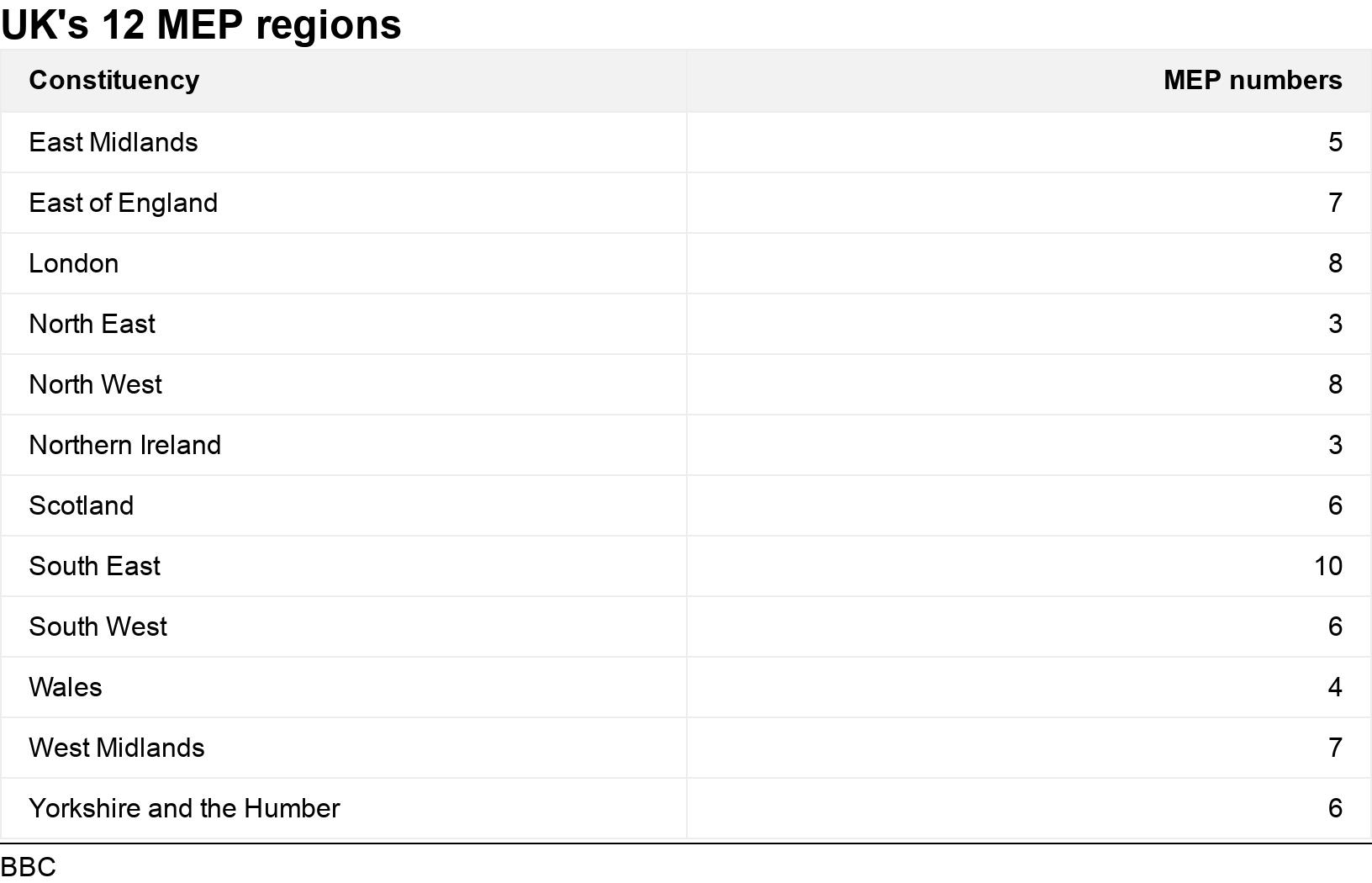 MEPs are elected in order as listed by their party, based on the parties' total share of the vote in each region.

In the nine English regions, Wales and Scotland, the number of MEPs is calculated using a form of proportional representation known as the D'Hondt formula, a complex system devised by Belgian mathematician and lawyer Victor D'Hondt in the late 19th Century.

The process is slightly different in Northern Ireland, where the Single Transferable Vote (STV) system is used. Here is a guide to how the two work.

Which parties are standing?

We have a guide here on what we know so far about how the main parties are preparing for the 23 May polls.

Click the links to see lists of candidates for your area

Who can I vote for?

When can I vote?

The UK will go to the polls on Thursday 23 May, between 07:00 and 22:00 BST. The Netherlands also votes that day, but voting in other EU nations will take place at varying times over the following three days, with the whole process completed by 22:00 BST on Sunday 26 May.

How do I vote?

At the polling station, you will be given a long ballot paper listing all the parties putting up candidates in your region and candidates' names, as well as any independents standing.

To vote for a party or individual, put a cross inside the box next to their name.

If you live in England, Wales and Scotland, you are only allowed to choose one party or individual to vote for.

In Northern Ireland - which uses a different electoral system - voters are able to rank the parties in order of preference. For instance, if there are five parties standing, voters can rank them from one to five, putting a one next to their first choice.

Here is the European Parliament's own explainer of how it all works.

How does the BBC report the results for the European Parliament

Change, in terms of both MEPs and vote share, is compared to the results of the last election in 2014. It doesn't take account of any changes between elections caused by defections or internal party re-organisation.

National parties don't have to declare which European group they're affiliated with until they have been elected and start sitting with that group.

Any people elected for national parties that we don't know the European allegiance of will go in to an 'Others' category at first, which will slowly reduce down to zero as MEPs either announce which European group they'll sit with or declare themselves as non-attached members or independents. That process could take several weeks.

Any MEPs elected for Emmanuel Macron's En Marche party will fall in to this category at first, as will any for Change UK, as both were formed after the 2014 election and have no sitting MEPs.

We know where Nigel Farage's Brexit Party will sit because several former-UKIP MEPs that have defected to the party have already joined the Europe of Freedom and Direct Democracy group.

Our vote share figures also only come from national parties where we know which European group they'll sit in.

If MEPs from the same national party sit in different European groups, we split the share of the vote their party received in the same proportion.

What are the European parties?

MEPs sit and vote in groups with like-minded politicians from the other member states, not necessarily with people from the same country.

Members of national parties don't have to sit in the same European grouping as one another, but most do.

Under EU rules these groups need to have at least 25 members, made up of MEPs from at least a quarter of EU member states (currently seven out of 28).

This means that some groups might not be able to re-form after the election, if they lose members from certain countries or go below 25 overall.

It's also possible for MEPs to not belong to any political group. They are known as non-attached members or independents.

For our results, we'll be treating the groups as they are before the election and assuming that all MEPs from the same national party will sit in the same European groups until we know otherwise.

More about each group on the European Parliament website.

When will I know the result?

Counting is also done on a country-by-country basis - but the results are kept secret until all voting is finished. They will be announced from 22:00 BST on 26 May.