The release of official figures on coronavirus-related deaths in Northern Ireland is set to change later this week, amid concerns about how care home deaths are being reported.

It follows calls for greater transparency over the number of people who are dying in cares home after contracting Covid-19.

BBC News NI assesses how death statistics are being reported at present, what is about to change and why.

Why have concerns been raised about care home death statistics?

Daily updates on the number of coronavirus-related deaths in Northern Ireland are a grim reminder of the human cost of this deadly virus.

But due to the fact that care home deaths occur outside hospital settings, they are not usually included in Northern Ireland's daily death toll, which has regularly been making headlines. 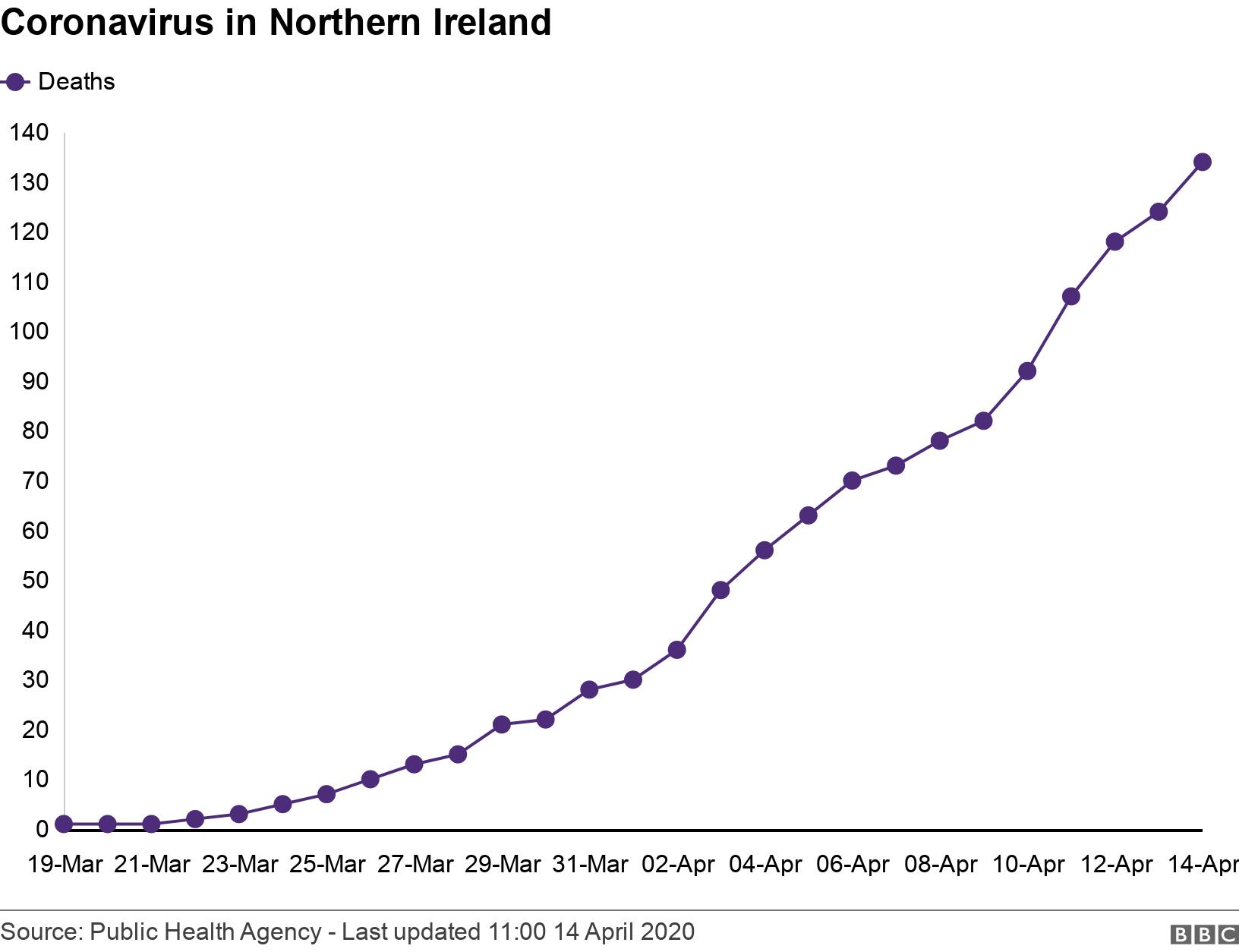 Northern Ireland's commissioner for older people and a prominent family doctor were among those to point out that this omission is causing deep public concern.

"The daily death toll here is not reflecting the number of people dying in care homes and that is worrying," said Dr George O'Neill, chairman of the west Belfast federation of GPs.

Commissioner for Older People Eddie Lynch echoed concerns that some deaths were not being reported in the official figures, and called for greater transparency on care home fatalities.

"The government needs to be pulling out all the stops to ensure that these deaths are not just being recorded, but are reported on," said Mr Lynch on Tuesday.

How has the government responded?

Health Minister Robin Swann has said he wanted to "dispel this myth that we are not recording deaths in care homes - we are".

He explained reporting of Covid-19 deaths falls into two main categories - a daily report which focuses mainly on hospital-based deaths and weekly statistics which include deaths "across hospital and community settings".

Who is responsible for counting coronavirus-related deaths in Northern Ireland?

Two separate government-backed organisations have been tasked with compiling official statistics on deaths linked to Covid-19 since the beginning of the outbreak in Northern Ireland.

They are the Public Health Agency (PHA) and the Northern Ireland Statistics and Research Agency (Nisra).

What is the difference between the PHA death toll and the Nisra death tolls?

The PHA releases a daily bulletin which, among other statistics, confirms the number of people who have died after testing positive for Covid-19.

It is mainly focused on deaths in hospitals, but a smaller number of deaths in non-hospital settings may be included in its figure.

In contrast, Nisra keeps records of all deaths in Northern Ireland, regardless of the cause or where the person died.

Therefore, Nisra's coronavirus-related death toll includes all deaths both inside and outside hospital settings.

Nisra figures also take much longer to compile and so they are released weekly rather than on a daily basis.

How does the PHA calculate its daily death toll?

The PHA toll consists of patients who die within 28 days of a positive Covid-19 diagnosis, whether or not Covid-19 was the cause of their death. 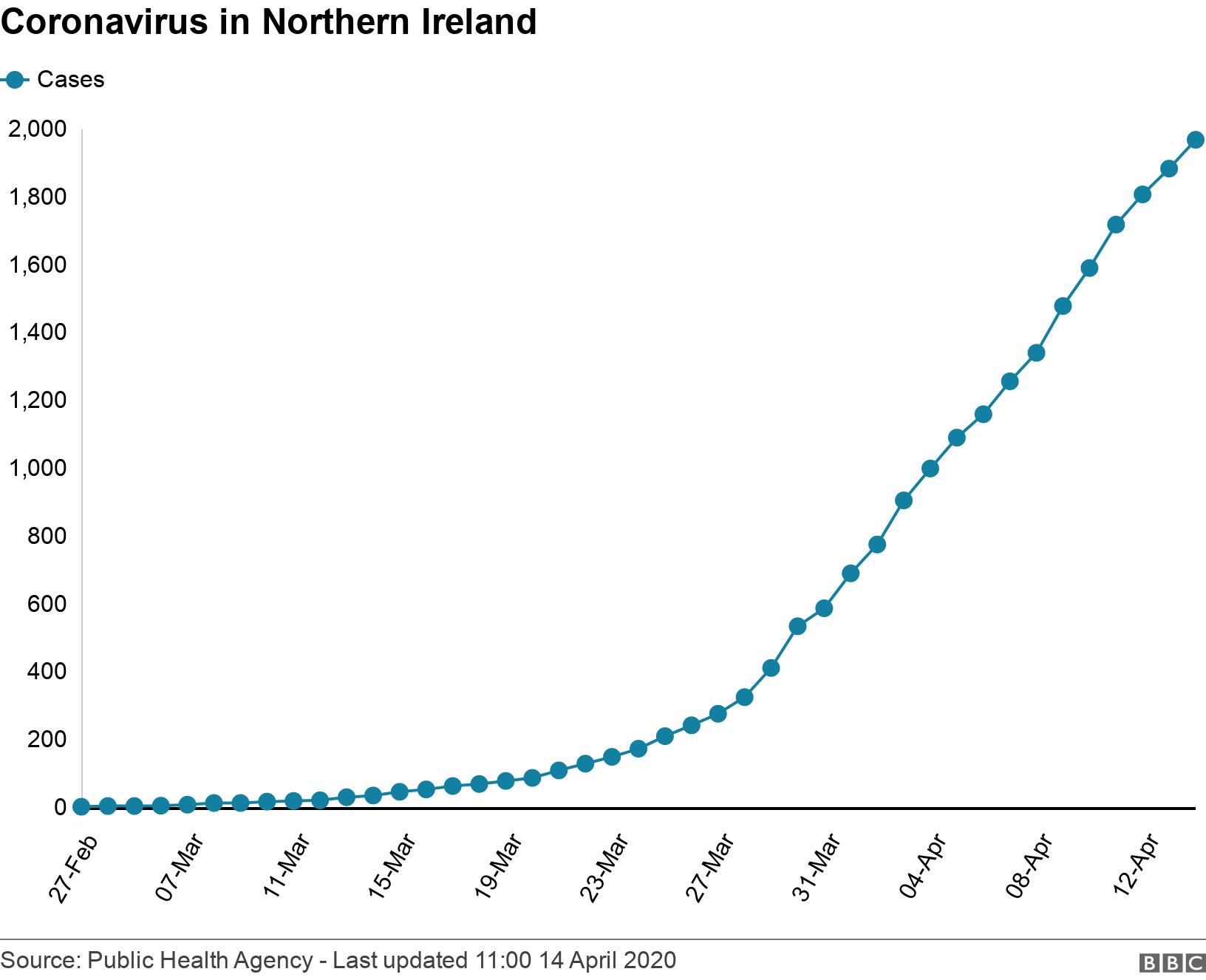 The daily figure is calculated each morning using data from health trusts and laboratory reports.

A PHA spokesman told BBC News NI that its figure consists primarily, but not exclusively, of hospital-based deaths.

"The deaths may have taken place in a hospital setting, or in the community or a care home, but must have been reported to PHA by the health and social care trust to be included in the report," he explained.

How does Nisra calculate its weekly death toll?

Nisra's figures are compiled from formal death registrations, a process which can take up to five days.

Its coronavirus-related death toll not only includes patients who have tested positive for Covid-19, but it also includes "suspected cases" in which Covid-19 been mentioned on the death certificate.

In these cases, the patient was not tested for coronavirus, but a doctor completing their death certificate has diagnosed a suspected case based on Covid-19 symptoms rather than a laboratory result.

How much higher is Nisra's overall death toll compared to the PHA's death toll?

Both organisations have different reporting periods and methodologies so the most recent set of figures we can compare are deaths that took place in Northern Ireland up until Friday 3 April 2020. 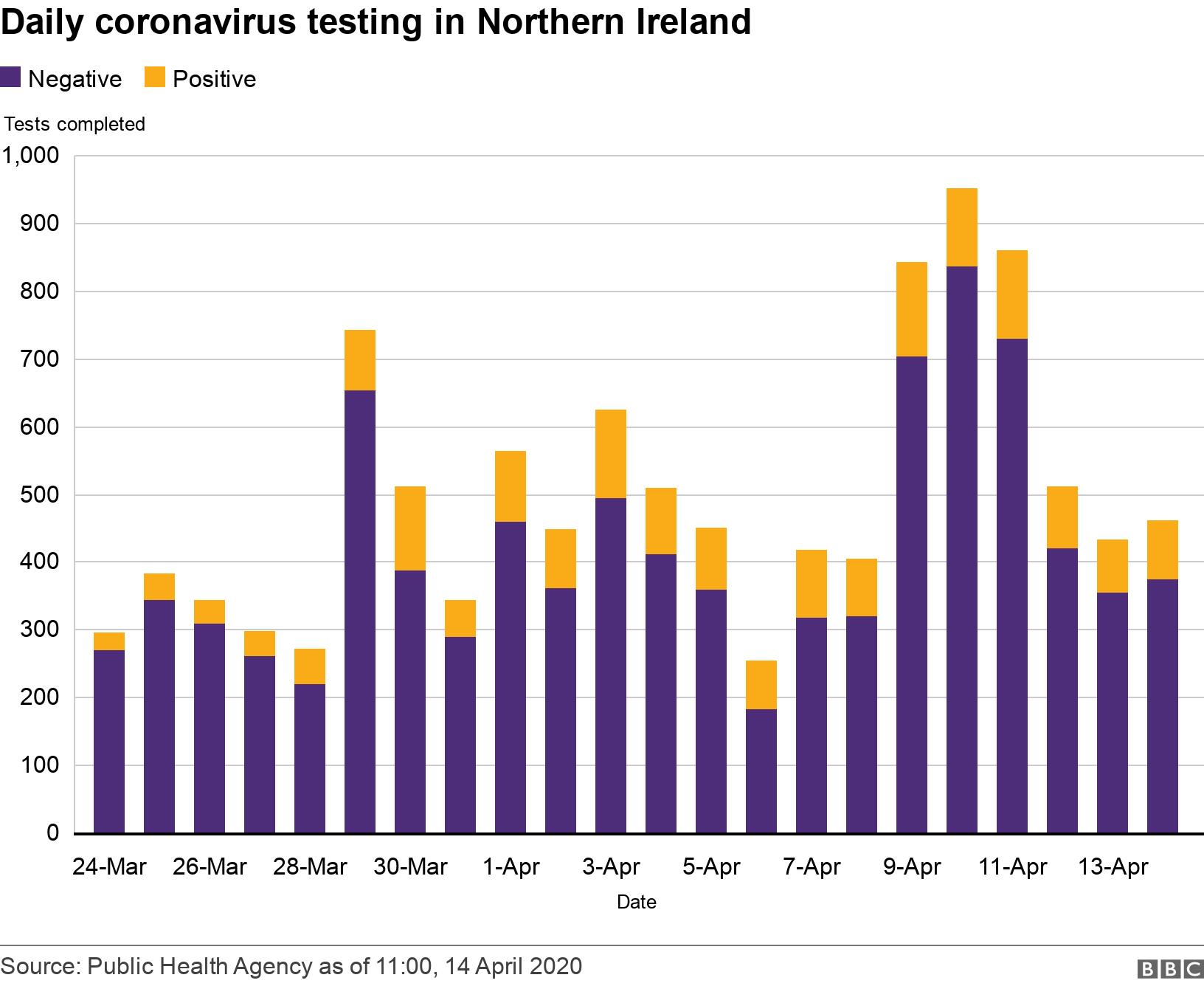 Back on that date, the PHA reported that a total of 48 people had died after testing positive for coronavirus since the beginning of the outbreak.

By contrast, NIRSA reported that Covid-19 had been mentioned on a total of 79 deaths certificates of people who had died on or before 3 April.

How many Covid-19 deaths have taken place in care homes in Northern Ireland?

This figure has not yet been revealed because location of deaths has not been specified in official statistics. 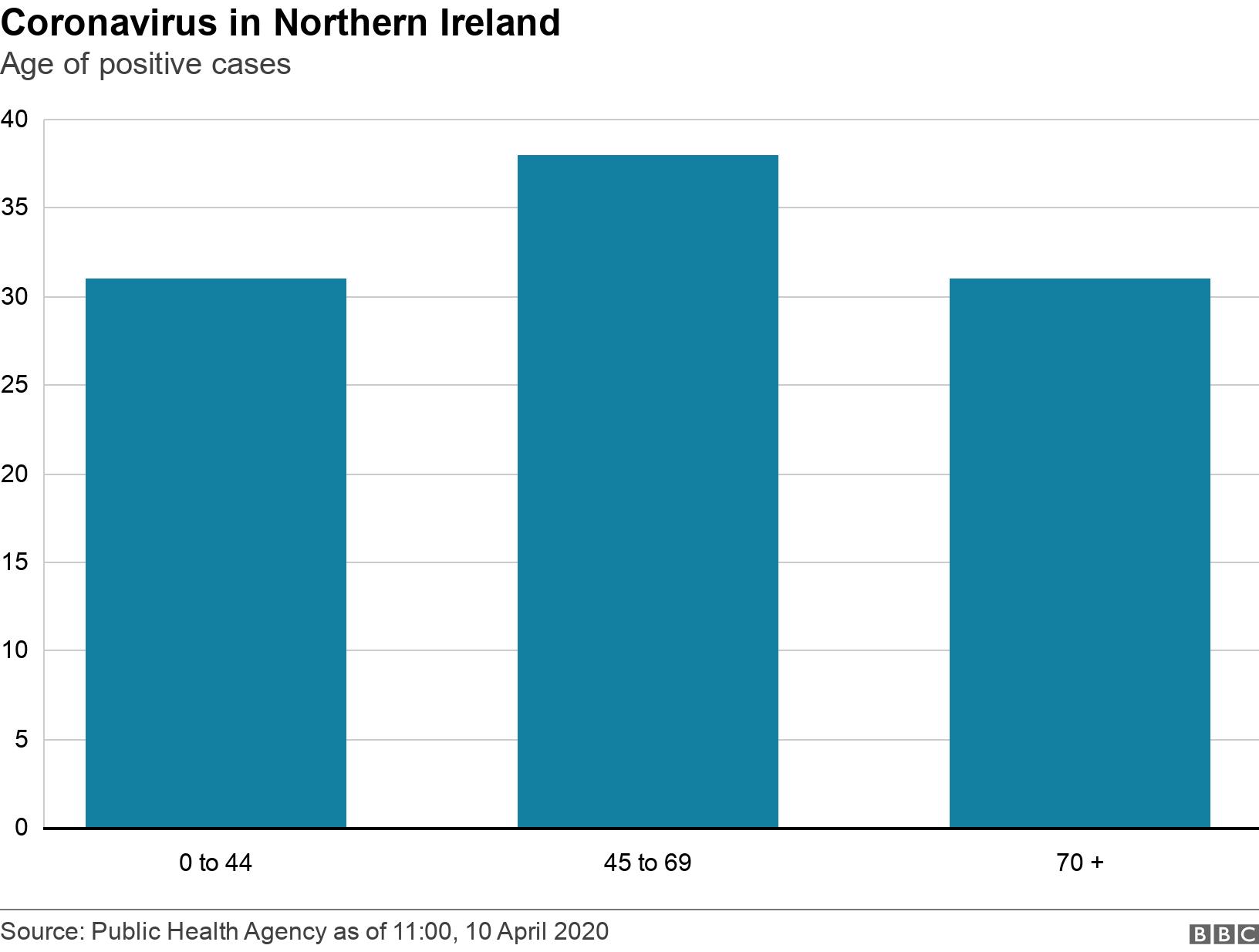 The median age for those who have died in hospital after being diagnosed with Covid-19 in Northern Ireland is 81.

How many care home residents have been diagnosed with Covid-19?

This figure has not been specified either, but on Tuesday Health Minister Robin Swann said tests were being carried out in cases where care home residents or staff members were "displaying Covid-19 symptoms".

He also revealed that there were "confirmed cases" of coronavirus in 32 care home across Northern Ireland.

The minister acknowledged that care homes were "particularly vulnerable" to Covid-19 but added that the situation was "to be expected when you see what's happening across the world".

How have concerns about care home death statistics been addressed?

On Tuesday evening, Nisra confirmed that it was changing the way it releases its weekly statistics on coronavirus-related deaths.

"Where a further breakdown (such as care homes and other settings) can be provided without compromising confidentiality, NISRA will provide this," the agency added.

Health Minister Robin Swann welcomed the change, saying it was "in everyone’s interests for published statistics to give as full a picture as possible on Covid-19".

Why release the daily PHA death figure if it's not the complete picture?

Daily statistics on coronavirus-related deaths are released throughout the UK and across the world and they provide a broad picture of the impact of the virus is having on different populations.

Robin Swann said the PHA's reports were still "important information which enables comparison with other regions who follow the same pandemic reporting protocols".

Nisra says the PHA's figures are "valuable because they are available very quickly, and give a good indication of what is happening day by day".

Nisra's death toll is based on death certificate data which can take up to five days to process, so although this is more comprehensive, it cannot be reported on a daily basis at present.

You can check out how many cases there are in your area by entering your postcode below:

A modern browser with JavaScript and a stable internet connection are required to view this interactive.

How many cases and deaths in your area?

Enter a full UK postcode or council name to find out