Same-sex marriage has been one of the main sticking points in the negotiations to restore the Northern Ireland Assembly.

After two-and-a-half years of stalemate, Westminster set a deadline for MLAs to get back to work or have decision taken out of their hands.

So where do couples stand right now and how soon could change take effect?

What is the current legal position in Northern Ireland?

Same-sex marriage is still banned in Northern Ireland, more than five years after it was legalised in Great Britain.

No same-sex couple is legally recognised as a married couple within Northern Ireland's borders, even if they were legally married elsewhere in the UK.

Marriage is a devolved matter which means each UK jurisdiction sets its own laws on the subject.

But the Northern Ireland Assembly has not passed any legislation since it collapsed in January 2017 after a row between the Democratic Unionist Party (DUP) and Sinn Féin.

What about same-sex couples who married outside Northern Ireland?

Their relationship has the same status as a civil partnership within Northern Ireland, as the law does not recognise their marriage.

The situation led to a legal challenge from a gay couple from Northern Ireland who married in England in 2014.

Their barrister argued they were stripped of lawful marriage at home, with their rights "returning and disappearing" as they crossed state lines.

A High Court judge dismissed their case, saying it was up to the government to decide social policy, but their appeal is ongoing.

Can same-sex marriage be legalised while Stormont is suspended?

Yes, that is possible.

Last month, Westminster passed legislation compelling the UK government to legalise same-sex marriage - unless a deal is agreed by 21 October 2019 to restore Stormont.

The legislation was one of a number of clauses controversially added to the Northern Ireland (Executive Formation) Act 2019 which became law on 24 July.

It means if there is no Stormont deal by the October deadline, Secretary of State Julian Smith must begin to introduce regulations to allow same-sex marriage.

If there is no October deal, how long will it take to legalise same-sex marriage?

That is not yet clear.

A further clause in the Westminster bill compels the secretary of state to ensure the regulations "come into force on or before 13 January 2020".

That clause, moved by Conservative peer Lord Hayward, also stipulates the secretary of state "must" introduce opposite-sex civil partnerships by the same date.

Lord Hayward told BBC News NI the 13 January deadline was chosen because it could take up to 12 weeks to update all related legislation.

Areas affected by changes in relationship status include pension rights and parental responsibilities.

Lord Hayward said it was "possible" the process could be completed earlier than expected, but warned 13 January was already a "very tight" deadline.

BBC News NI asked the Northern Ireland Office if marriages could be legalised before the deadline, but its spokeswoman would not be drawn on that question.

What has the Northern Ireland Office (NIO) said about the deadline to legalise same-sex marriage?

An NIO statement said: "We recognise there are a range of sensitive policy issues that need to be carefully worked through.

"We will work with relevant Whitehall departments and the Northern Ireland Civil Service, including GRO (General Register Office), to take all necessary steps between now and 21 October 2019, to ensure that, if the executive has not been restored by that date, we are ready to implement regulations to provide for both same-sex marriage and opposite-sex civil partnerships by 13 January 2020."

Could same-sex couples marry on the day the law changes?

Again, this is unclear. At present, all engaged couples must give at least 28 days' notice before their wedding.

This is a legal requirement to allow time for registrars to ensure both parties are free to marry and consider any objections.

BBC News NI asked the NIO and GRO if same-sex couples would face the same 28-day rule imposed on heterosexual couples, but neither authority provided an answer.

How soon were the first weddings after the law changed in Great Britain?

Scotland's same-sex marriage law came into effect on 16 December 2014 and was used shortly after midnight.

The first same-sex marriage using Scottish law was that of a couple in Australia who upgraded their civil partnership at a British consulate.

What has been the reaction of those opposed to same-sex marriage?

Opposition has been led by the DUP, which argues imposing same-sex marriage and abortion in Stormont's absence would breach the devolution settlement.

The DUP also said it left "very little incentive" for Sinn Féin, which supports both changes, to meet the October deadline.

It added decisions on marriage and abortion should remain the responsibility of "locally-elected" politicians.

How much support was there for same-sex marriage at Westminster?

MPs back a plan to legalise same-sex marriage in Northern Ireland, by 383 votes to 73https://t.co/fP0btmImry pic.twitter.com/9uSkOGZmQZ

On 9 July, the House of Commons voted overwhelmingly to allow same-sex marriage in Northern Ireland, by a ratio of more than 5:1.

How much support was there for same-sex marriage at Stormont?

It was narrowly rejected the first four times, but on the fifth vote it was passed by the tightest possible margin.

However, the DUP blocked any change in the law with a Stormont veto known as a Petition of Concern.

How do same-sex marriages and civil partnerships compare?

How popular are civil partnerships in Northern Ireland?

Since civil partnerships were introduced in 2005, there have been an average of 100 each year. 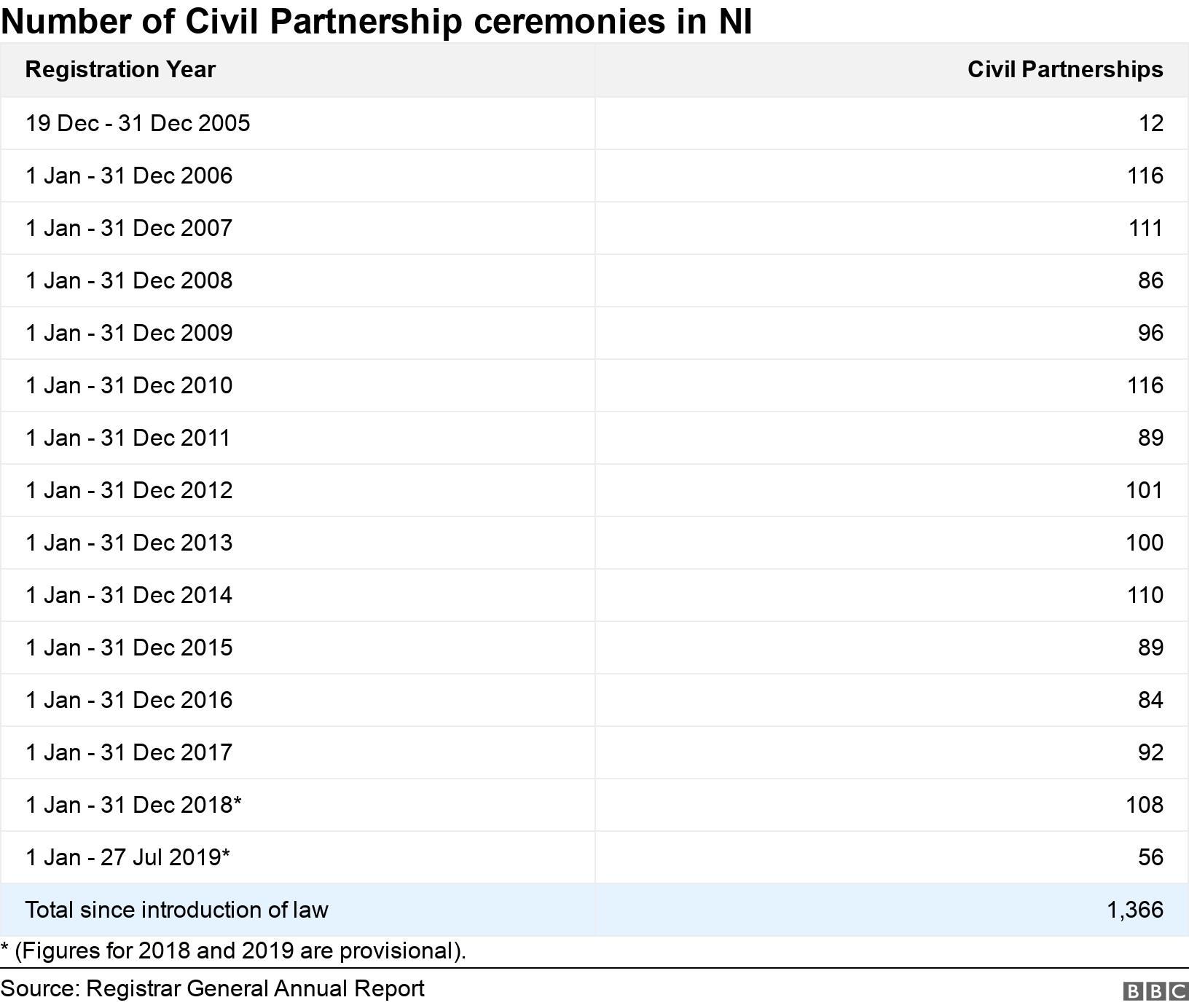