A teenage boy has been stabbed to death in an attack in Hackney, east London.

The 15-year-old victim was found injured in Somerford Grove at about 21:00 BST on Wednesday and died shortly after, police said.

A shopkeeper said a boy ran into his store pleading for help, saying he had been stabbed in the back.

A second boy, aged 16, found nearby Shacklewell Road, was also stabbed but did not sustain life-threatening injuries.

A man from Elif Food Centre, who did not want to be named, told BBC London he tried to help one of the victims.

He said: "One boy came running into the shop last night saying 'I have been stabbed in the back. Help me. Help me.'

"We called an ambulance and now police have seized our CCTV."

Two friends of the victim spoke of their shock after visiting the crime scene.

One said: "It came as a surprise to us because he was a good guy.

"We did music together. He didn't only produce afrobeats, he made drill music as well. He also sold some beats to some big artists.

"I never thought that any of my friends would be murdered. I'm shocked."

The other friend added: "I saw him the day before yesterday. He was a good friend, a nice lad.

Police said a Section 60 stop-and-search order had been put in place for the whole of Hackney. No arrests have been made in connection with the killing.

Met Commissioner Cressida Dick described it as a "terrible, terrible thing" as the force revealed statistics showing a drop in homicides compared to the previous financial year. 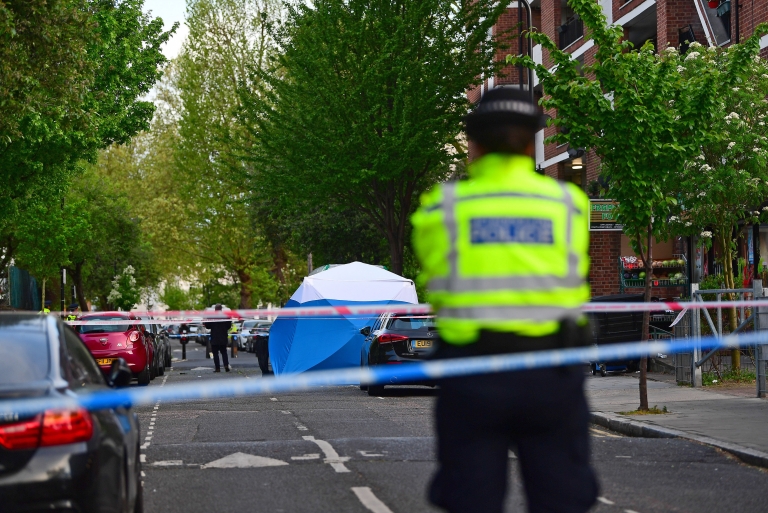 Speaking about the latest stabbing in Hackney, Ms Dick said the two boys were with a group of other boys and a girl, adding there was "some sort of confrontation with another group".

Just off a busy main road there is a huge cordon surrounding the Somerford Grove estate.

Right in the middle of the cordon a big blue tent can be seen - the spot where the victim died.

Residents have been telling me they are shocked and scared as only six days ago another person was stabbed to death in Hackney.

A man suffered "life-threatening" injuries in the attack on Camden Road shortly after midnight.

So far this year, more than 40 murder investigations have been launched in the capital by the Metropolitan Police and British Transport Police.

Twenty-nine of those cases are stabbing investigations.

London mayor Sadiq Khan said he was "deeply saddened" by the latest killing.

"This horrific violence has absolutely no place on our streets," he said.

Motives and circumstances behind killings have varied - as have the age and gender of the victims.

10 tips for sleeping in hot weather

The coldest computers in the world