Businesses who have signed up to pay staff the "real living wage" are being urged to continue doing so during the coronavirus crisis.

The wage is set by the Living Wage Foundation and is separate to the statutory National Living Wage, which rose to £8.72 an hour on Wednesday.

One in five employees earns below the Living Wage Foundation rates, including hundreds of thousands of key workers.

Economists urged against more rises before the toll of the crisis is clear.

The Living Wage Foundation says its rate - which applies to all employees over 18 - is calculated independently and is based on costs such as food, clothing and household bills. 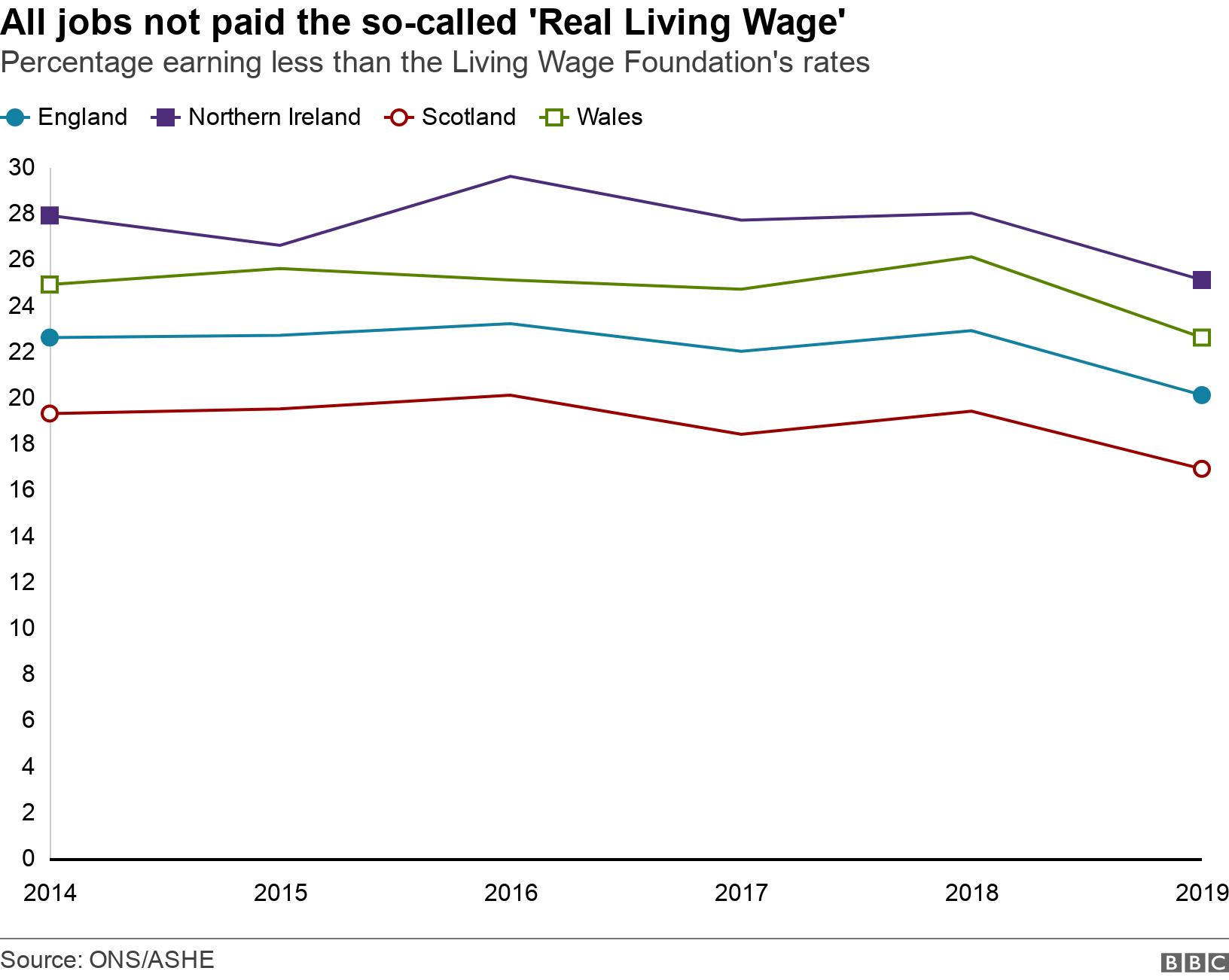 Some 6,000 organisations are now signed up to the scheme, including Crystal Palace Football Club, insurer Hiscox, Welsh Water and London City Airport.

Katherine Chapman, director of the Living Wage Foundation, said: "It's too early to say how businesses will respond to this crisis. Like all organisations, living wage employers will be affected by the impact of Covid-19 and some may struggle with their commitments.

"Right now, we are still seeing new employers signing up to become accredited which is really heartening.

'I ran out of money every month'

Hakeem Lawal, a father of three, began work in 2018 as a cleaner for a private company working in NHS facilities on £7.83 an hour with no sick pay from his employer.

"It was very hard because by the end of the month - more or less a week before the end of each month - you are waiting with nothing in your account at all," he said.

"The cleaning chemicals could be very bad for your lungs too."

'The worst-paid job I ever had'

Ceri Owens could not afford to pay the rent on her Brixton flatshare after a month of working as a teaching assistant in February 2018.

The 25-year-old said she was paid £65 for each eight-hour day working in classes with children with Special Educational Needs (SEN).

She also said she had to pay for her travel to work, which could be as far as from Zone 2 to Zone 6 of the London Underground - costing around £13.

"It was one of the most important jobs I had and it was by far the worst-paid job I had ever had," she said.

Jabed Hussain worked as a courier but said he needed to take extra food delivery work - which he said paid between £5 and £6 for each job - to supplement his wages.

"I don't know how safe my work is at the moment but I have to keep doing it," he said.

"I can't stop working because the bills will still keep coming out of my account," said Mr Hussain, who has two children and rents a four-bedroomed house with two other couples in Plaistow, east London.

The Low Pay Commission, an independent body which advises the government, warned it might be necessary to apply an "emergency brake" on long-term plans to continue to lift the statutory minimum.

The Resolution Foundation, a think-tank focused on improving the living standards of those on low-to-middle incomes, also said it would be better to wait until until the crisis was over before public sector bodies introduced the real living wage.

Bryan Sanderson, the chair of the Low Pay Commission, said: "The ongoing pandemic clearly represents a very challenging set of circumstances for workers and employers alike."

They include occupations such as hospital cleaners and porters, pharmacy assistants and teaching assistants, carers, food processors and shelf fillers.

Lola McEvoy, GMB union organiser, said: "This crisis has inadvertently shone a light on the rock-bottom pay and miserly terms and conditions of the people we now expect to risk their health to protect us."

The Department for Business, Energy and Industrial Strategy said: "It is right we ensure the lowest paid are fairly rewarded for their contribution to the economy, particularly those working in essential services during the biggest threat this country has faced in decades.

"This year's increase to the National Living Wage means we will be putting an extra £930 a year into the pockets of 2.4 million of the UK's lowest-paid workers."

Across all types of occupations, data shows one in five employees were paid below the Living Wage Foundation rates across the UK last year.

More about this story

The Shared Data Unit makes data journalism available to news organisations across the media industry, as part of a partnership between the BBC and the News Media Association.