But one figure in particular might have grabbed your attention, probably because it's risen by more than 10%.

What is going on?

The figure we're talking about is the "police precept" - the portion of your council tax that goes to the local police force.

Almost everyone in England in a Band D house - the middle council tax band - will have to pay an extra £24 this year.

Previously, local Police and Crime Commissioners (PCCs) were only allowed to raise this by a maximum of £12.

But, in December, the government increased the limit and almost every force opted for the new maximum.

Now we're starting to pay it and, perhaps unsurprisingly, some people aren't impressed.

A 21.8% increase in council tax for the Police & Crime Commissioner for Northumbria? 😮 if my TV or energy bill went up by that much I’d have the right to cancel! 🤔 #northtyneside #counciltax pic.twitter.com/CV2nWX3JK2

.@SCC_Help hi there, I've just had 19/20 council tax through and notice the Police & Crime commissioner has gone up 14.1%... what on earth for? Crime is hitting highest levels. No strategy to tackle knife crime. So why am I paying more for something that clearly isn't working?

Received new Council Tax bill for the coming year. Advised that the Police charges have increased by 12.5%! No problem at all - but does this mean Dronfield Police Station will reopen full-time? @DerbysPolice @DronfieldSNT @nedDC @Derbyshirecc #localmoneyforlocalpeople

Is it the same everywhere?

Police have become more and more reliant on cash from your council tax.

In the mid-1990s, just 12p in every pound of police spending came from the precept, according to the Institute for Fiscal Studies.

But last year 32p in every pound of funding for forces in England and Wales came from the precept, Home Office figures show. 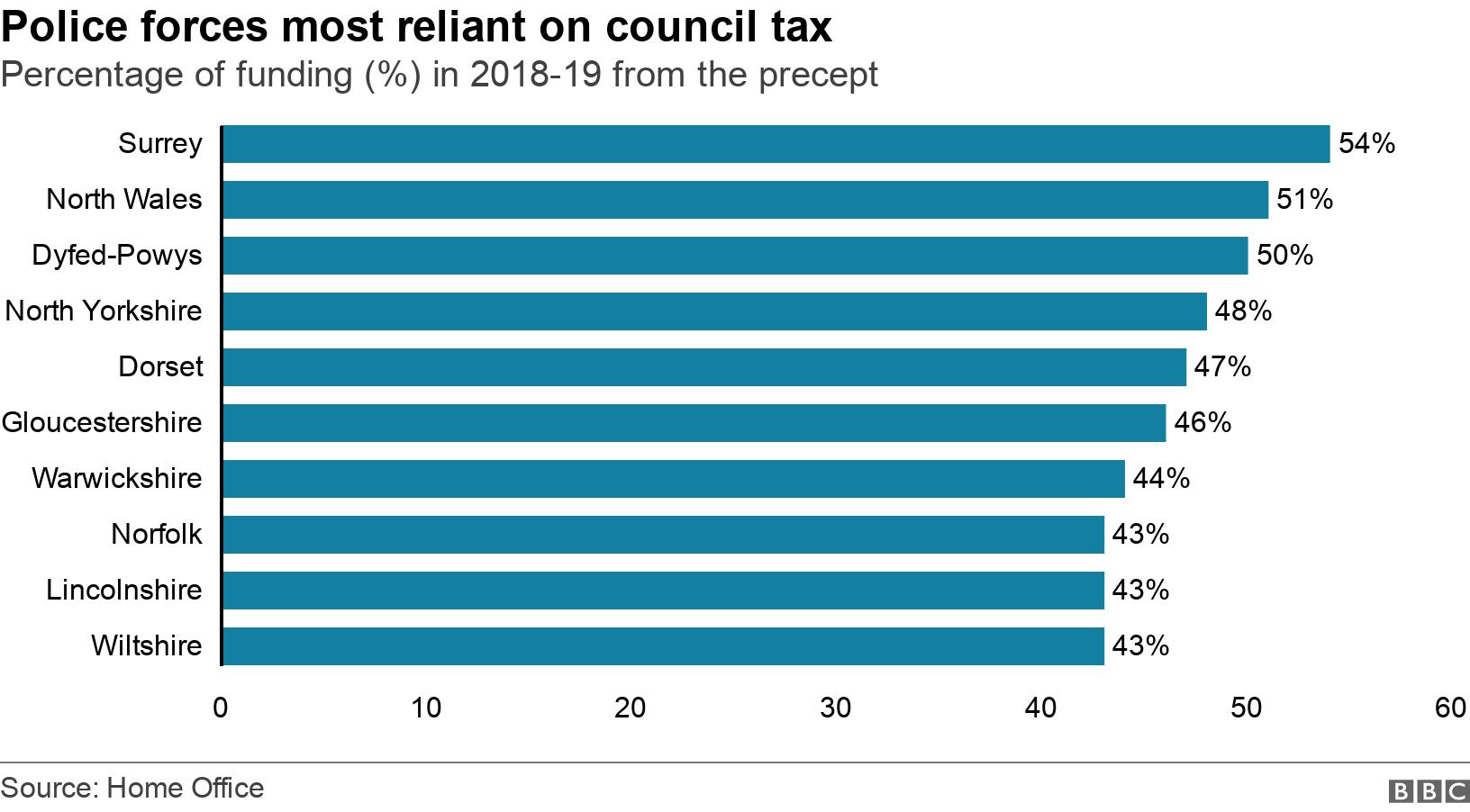 The amount you pay for your police force varies across the country.

Almost everyone in a Band D home faces the same £24 increase, but as a percentage this can differ greatly between areas (depending on what you paid previously).

In the North East, the increase puts the police precept up an average of 16% while in London it adds about 11%. 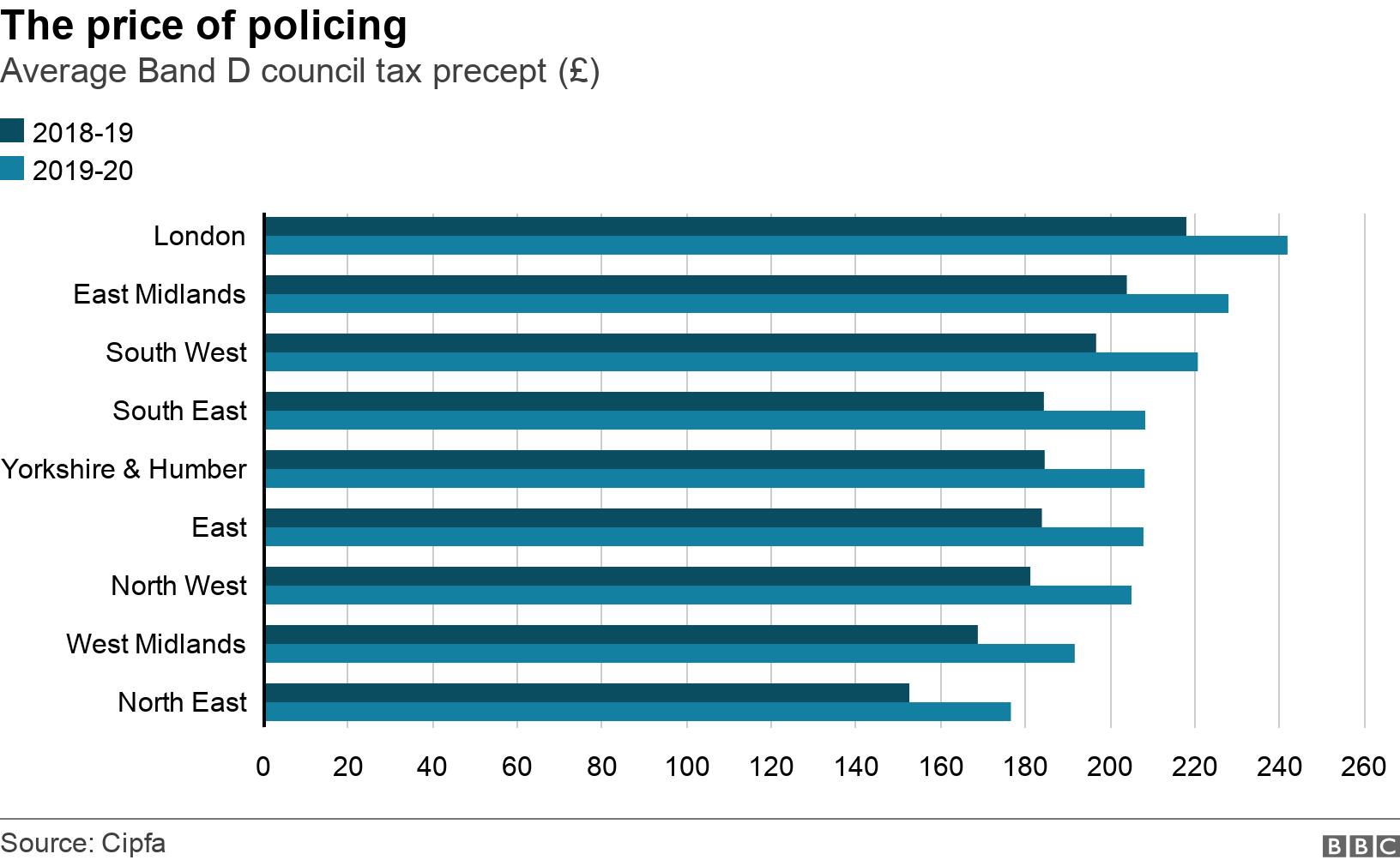 Where is your cash going?

According to the Home Office, £509m would be raised if each force in England and Wales adopts the £24 increase this year. That's in addition to a £304m boost from central government.

How they spend the cash is up to them.

Many say they will use it to put more officers on the streets and to deal with rising serious violent crime.

Surrey Police has promised to recruit 100 officers, who will work as detectives tackling organised and drug crime, and double the size of their neighbourhood teams, while saving 25 posts which would otherwise have been lost.

But budgets are still tight. Forces such as West Midlands Police say they will simply use the extra cash to plug a funding gap and maintain their current level of policing.

In Lincolnshire, the chief constable has said there will be cuts, including the loss of 40 officers and 30 support staff, despite the rise in tax.

And the settlement is not enough to reverse the 30% real-terms cut in central government funding since 2010. By last December there were 44,000 fewer officers, staff and community support officers than in 2010.

On top of this, the government passed a £330m annual cost for police pensions on to local forces, so many will have to use the extra money to cover this new cost - meaning taxpayers may not see much difference in policing levels.

Some PCCs, such as Dyfed-Powys' Dafydd Llywelyn, have expressed their frustration at having to implement the rise. He said the decision had been "difficult" but "vital to service sustainability", adding that the force was still "in a critical and precarious position".

Why are councils paying?

The government claims that raising money this way means police are more accountable to the local population. It also says the money will contribute to 2019 having "the most substantial investment in policing since 2010".

The National Police Chiefs' Council has welcomed the move and says it shows the government recognises the "severe strain" budget cuts and increasing violence have caused.

But Labour's Shadow Policing and Crime Minister Louise Haigh says local taxpayers are "being forced to pay the price for reckless Tory cuts to local police forces" and that it will create a postcode lottery where some areas are hit harder by austerity than others.

The Police Federation agrees, saying the government is "passing the buck" to local forces and that there is the risk of creating "a two-tier system where wealthier communities will have more money available for local policing than others".

Were the public consulted?

The PCCs had to find out what the public thought of the idea, but this was not binding.

In Leicestershire, for example, they carried out a consultation via the force's website, the commissioner's social media accounts and through local partner organisations. Around 1,000 taxpayers responded - and 72% were in favour of the increase.

In the West Midlands, around 500 people responded via online polls - with 76% in support.

In Wales, Gwent Police asked residents online and in person if they would support a £1 monthly increase, with 67% of about 2,000 people saying they would. In the end, it went up by about £1.40 a month.

Gwent Police say they promoted the consultation online and in local media. In Newport, you even had to answer the survey to access the free bus wifi, although those results were not included in the end because it was deemed too localised and people did not have enough information when they answered.

What about Scotland and Northern Ireland?

In Scotland, policing is a devolved matter. Police Scotland is centrally funded by the Scottish government and has no council-tax raising powers, although local authorities are able to put some of their general budgets into funding local policing priorities.

Northern Ireland also has a single police service, the Police Service of Northern Ireland (PSNI) which is centrally funded from Westminster. It bids for funding from the Treasury and cannot raise money through local taxes.

Like in England PCCs in Wales were allowed to increase the Band D precept by £24, although only two of the four went for this amount, in South Wales and Dyfed-Powys. Gwent Police chose to raise it by only £16.69 and in North Wales by £19.98.