Thousands of NHS jobs are requiring workers to pay for the costs of criminal background checks, research by the BBC has found.

Staff are being told to either cover the £44 fees upfront or have them deducted from their first wages, but the practice varies across England.

An NHS nurse said it was as though staff were paying "a fee to get a job".

NHS Employers said passing on costs was down to "local discretion".

About 4.2 million disclosures of convictions and other police records are made each year in England and Wales as employers check the backgrounds of staff.

Data from the NHS jobs website showed more than 2,900 adverts stating the cost of a Disclosure and Barring Service (DBS) check would be deducted from the worker's salary - about one in 10 of the adverts listed since January.

The charges apply to successful candidates but some trusts warned people would still have to pay even if they withdrew their application when the process had started.

Recruitment websites for other sectors have also advertised jobs requiring a DBS check paid for by the applicant. These included home care assistants and medical couriers.

They are intended to help employers avoid recruiting people who should not work with vulnerable groups, such as children.

'I was told everyone had to do it'

Applying for a job as a hotel marketing manager, Kerri Watt was surprised at being asked to have a criminal background check.

When she was told she would have to cover the cost herself, she withdrew her application.

"I thought if the company wasn't willing to invest that for me, then I could come up against barriers for future training needs," said Ms Watt, from the New Forest.

The hotel, in the East Midlands, did not explain why it was necessary, just telling 34-year-old Ms Watt "everyone has to do it".

"They expected me to fully fund a DBS and do it myself. They just wanted the certificate once I had gone through the process. The job was a marketing manager in a hotel, so in my opinion did not warrant such high security check levels."

'We shouldn't have to pay for their bureaucracy'

A community psychiatric nurse from Yorkshire, who asked not to be named and for the trust he worked for to not be identified, said: "This is a hidden cost just for going to work.

"Mine is an enhanced check so I have to pay £44 every year. It's unacceptable."

He said the practice was not the same across the country.

"My trust in Yorkshire makes us pay, but other trusts in other parts of the country pay for new joiners," the nurse added.

'People are worried about the cost involved'

Karolina Gerlich, chief executive of the National Association of Care and Support Workers (Nacas), said: "People are worried about the cost involved. It is a lot of money to be asked to pay straight after getting a job.

"There is a service people can enrol in to keep their DBS up to date, which costs £13 a year, but it's not advertised enough.

"The initial cost is a lot for low-paid care workers and many do not have the funds available.

"Some companies will charge different rates. Some will eventually give the money back and some will not."

The BBC found 25 NHS employers where every advert mentioning a DBS check explained the cost would be deducted from the worker's pay. However, more than 500 other employers did not deduct the fee.

In Manchester, healthcare support workers on salaries starting at £14,625 face deductions from their pay.

The GMB trade union said staff were struggling to cope because pay was not increasing in real terms.

A spokeswoman said: "The hidden costs of working for the NHS are just another financial challenge that our members are having to deal with." 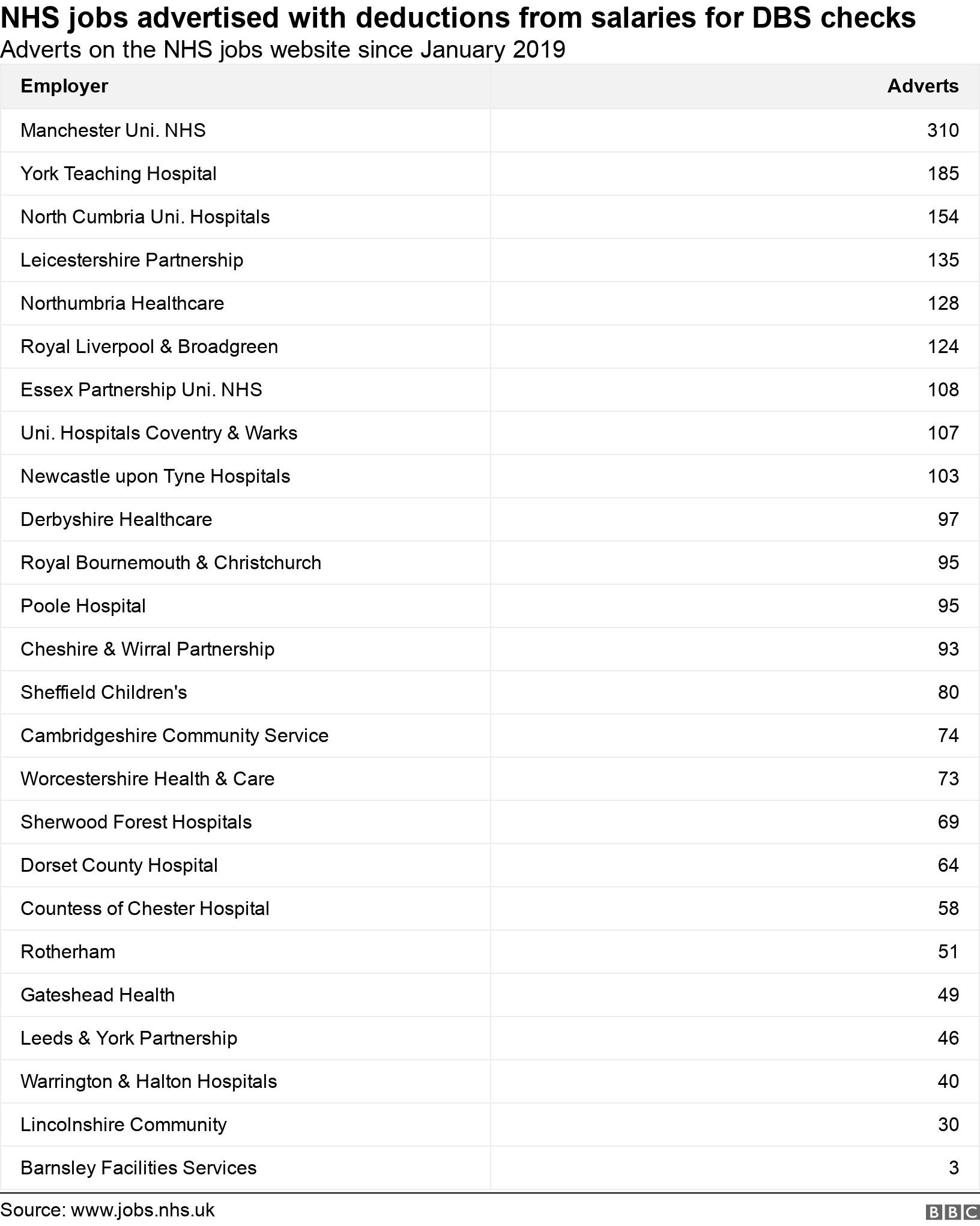 A spokesman for Manchester University NHS Foundation Trust, which had the largest number of jobs advertised with deductions, said: "It is common practice amongst NHS Trusts across the country to recharge candidates for the cost of the DBS. This has been in place for a number of years.

"Once acquired, the DBS certificate is owned and retained by the candidate rather than the organisation. Candidates also have the option to join the DBS Update Service, which enables them to use their disclosure certificate when applying for other positions, or if they wish to take up a volunteering activity."

A spokeswoman for York Teaching Hospital NHS Foundation Trust said: "Back in 2015-16 the trust spent nearly £70,000 on DBS checks, which was clearly a significant cost to the organisation. As such, from April 2017 the trust introduced a process to reclaim the costs of the checks from the appointed candidate.

"As all of our neighbouring NHS trusts were already charging for DBS this brought us in line with other employers."

She said successful candidates could spread the cost over six instalments.

A spokesman for North Cumbria University Hospitals NHS Trust, which had 154 adverts mentioning DBS checks, said: "We give all new employees the option to spread the cost over three or four months."

He said the trust had "not seen any negative impact on the ability to recruit to posts however we will continue to monitor this".

Jagriti Patwari, director of Eurocom CI, a company that carries out background checks, said: "It is common for candidates to be asked to cover their own cost of their DBS check where it is high turnover jobs because candidates normally don't stay in the job long, such as bank staff of nurses and care homes."

An NHS Employers spokeswoman said: "Charging potential employees for DBS checks is down to local discretion.

"There are similar requirements on a number of colleagues to maintain professional memberships and registrations, which are also borne by the employee."