New laws to ensure the most dangerous criminals spend longer in custody have been announced.

So, who decides which crimes require time in prison and how long that should be?

What does the government want to change?

In the Queen's Speech, the government said it would toughen sentences for the most serious violent offenders, including terrorists.

Automatic early release at the half-way point of their sentence would be scrapped. Those given sentences of four or more years for serious violent crimes would be made to serve a minimum two-thirds of that time in prison before being released.

They would also increase the number of people who could spend the rest of their life in jail. The minimum for serious terror offences would increase to 14 years.

The changes follow the killing of two people at London Bridge, by convicted terrorist Usman Khan, who had served half of his sentence.

How are prison sentences decided?

About one in 10 people convicted in court receives a prison sentence - with the rest given fines, community service or other punishments.

Generally, the maximum sentence for a crime is enshrined in law.

For example, someone convicted of burglary could face 14 years in jail.

However, very few burglars will end up in prison for that long, if at all. 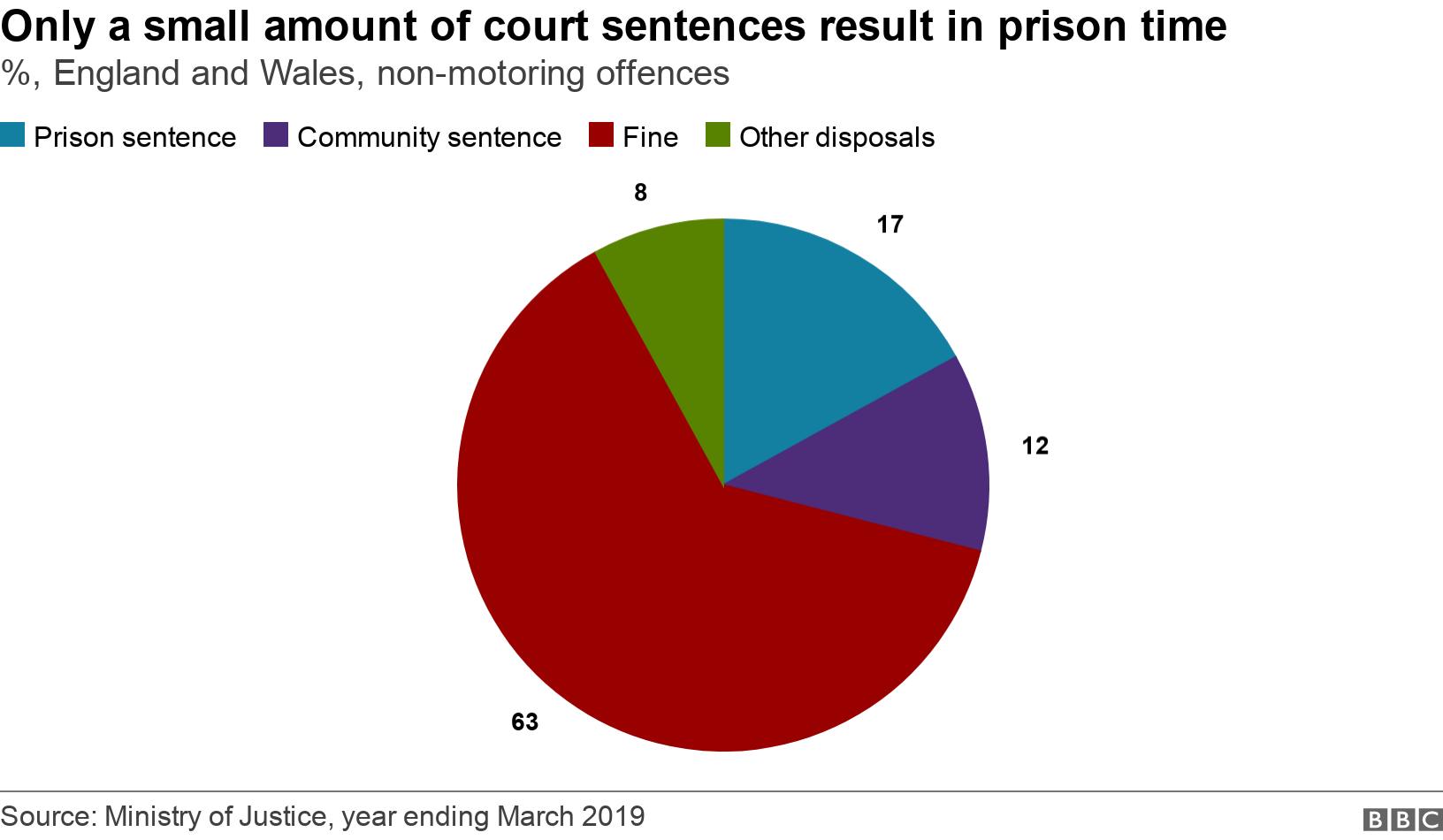 To help judges be consistent, they refer to sentencing guidelines.

These help ensure similar offences are given similar punishments, across all the courts in England and Wales.

Both Scotland and Northern Ireland have their own sentencing guidelines.

Judges will look at, among other things, whether the burglary involved any violence or if it was by a repeat offender.

So, a serial burglar who ties up victims could expect a lengthy prison sentence.

A genuinely sorry, first-time offender who stole through an open window would be treated more leniently - perhaps through community service.

Many prison sentences require a portion of time is spent behind bars, with the rest served on licence in the community.

These licences require offenders to abide by a set of rules, which could include bans from certain areas, or substance rehabilitation. If the conditions are broken, offenders can be sent back to jail. 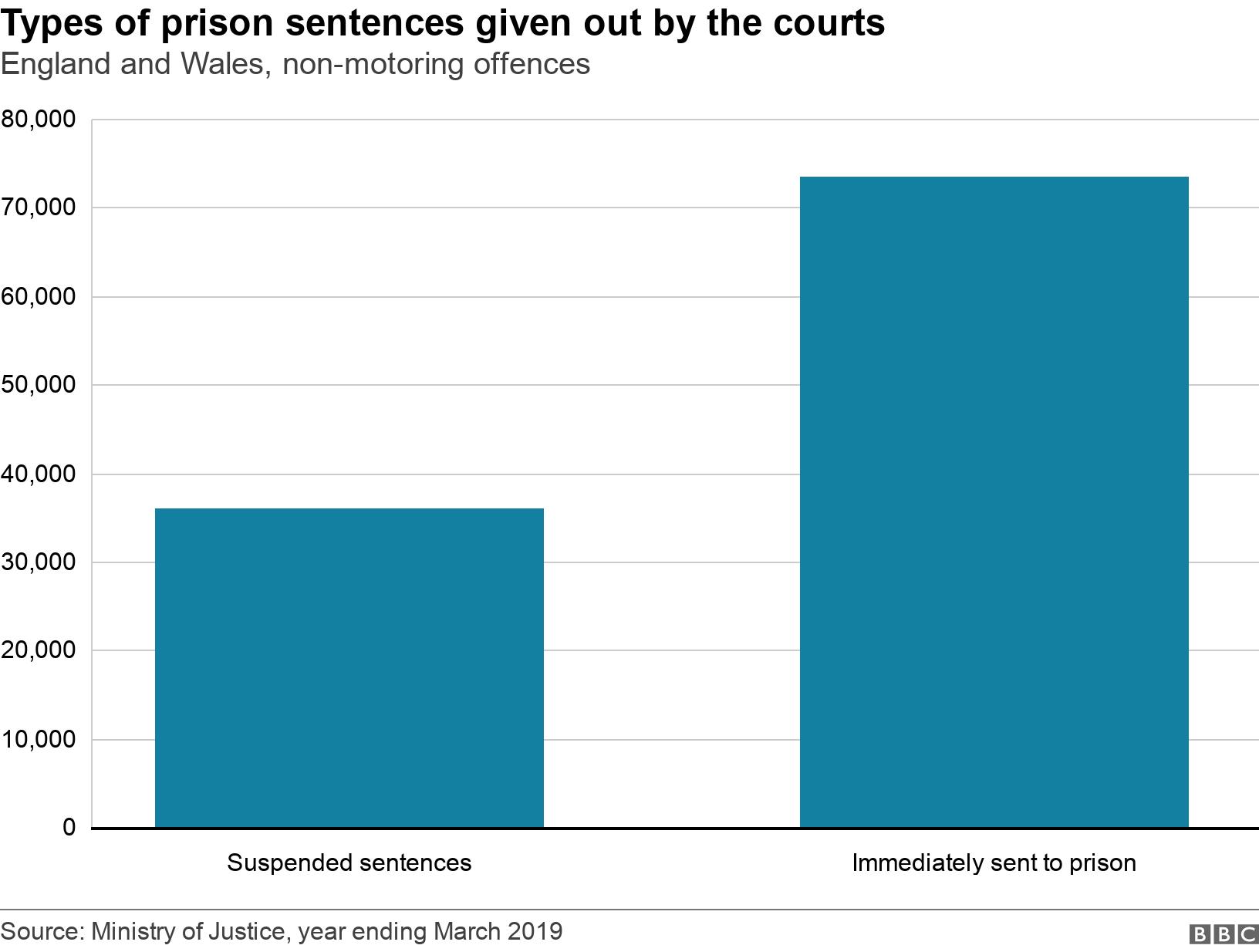 However, some prison sentences, known as suspended sentences, involve no time in prison at all.

For the entirety of a suspended sentence, the offender must abide by certain conditions outside prison, with the threat of imprisonment if these are breached.

How long do offenders spend in prison?

Those placed in immediate custody by the courts go straight to jail.

For about 90% of such sentences, an automatic release is granted half-way through the sentence.

The offender is then on licence for the remainder of it. 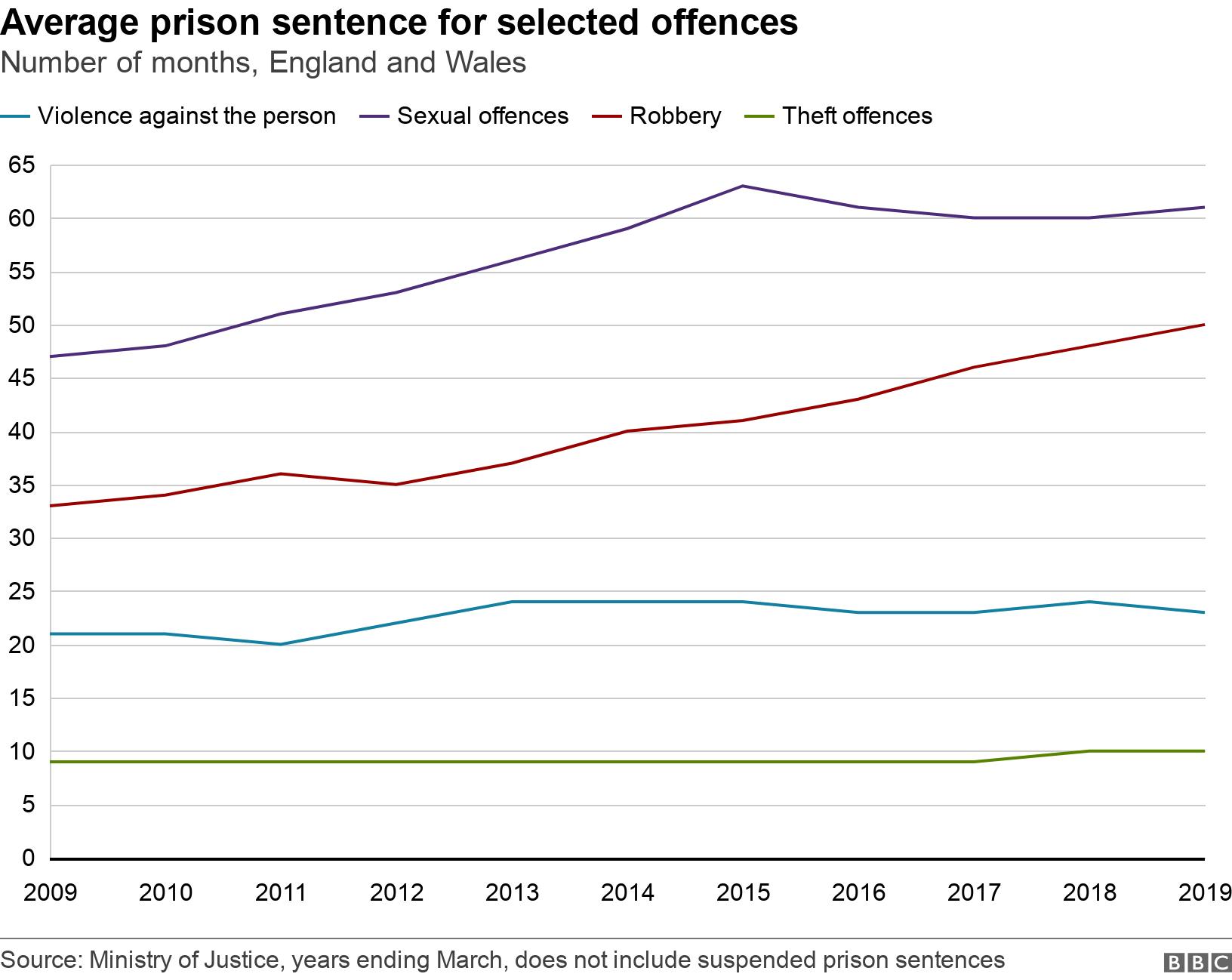 For example, if someone is given a four-year sentence for robbery, they will spend two years in prison and two years outside.

Early release has been around for a number of decades. It is intended to allow some rehabilitation in the community, while keeping release dates consistent and prison numbers down.

Those guilty of more serious crimes - such as serious sexual assaults or grievous bodily harm - will spend a greater part of their sentence in jail. This will normally be two-thirds of their sentence and they will require approval from the parole board to gain early release.

The parole board will decide whether or not the offender is safe to return into society. This decision is based on evidence from victims, health professionals, prison staff and the offender themselves.

What sentences can certain crimes carry?

What is a life sentence?

A life sentence rarely means life in prison. On average, those sentenced to life spend 17 years in jail.

However, these offenders will be on licence until they die and expected to meet certain conditions. 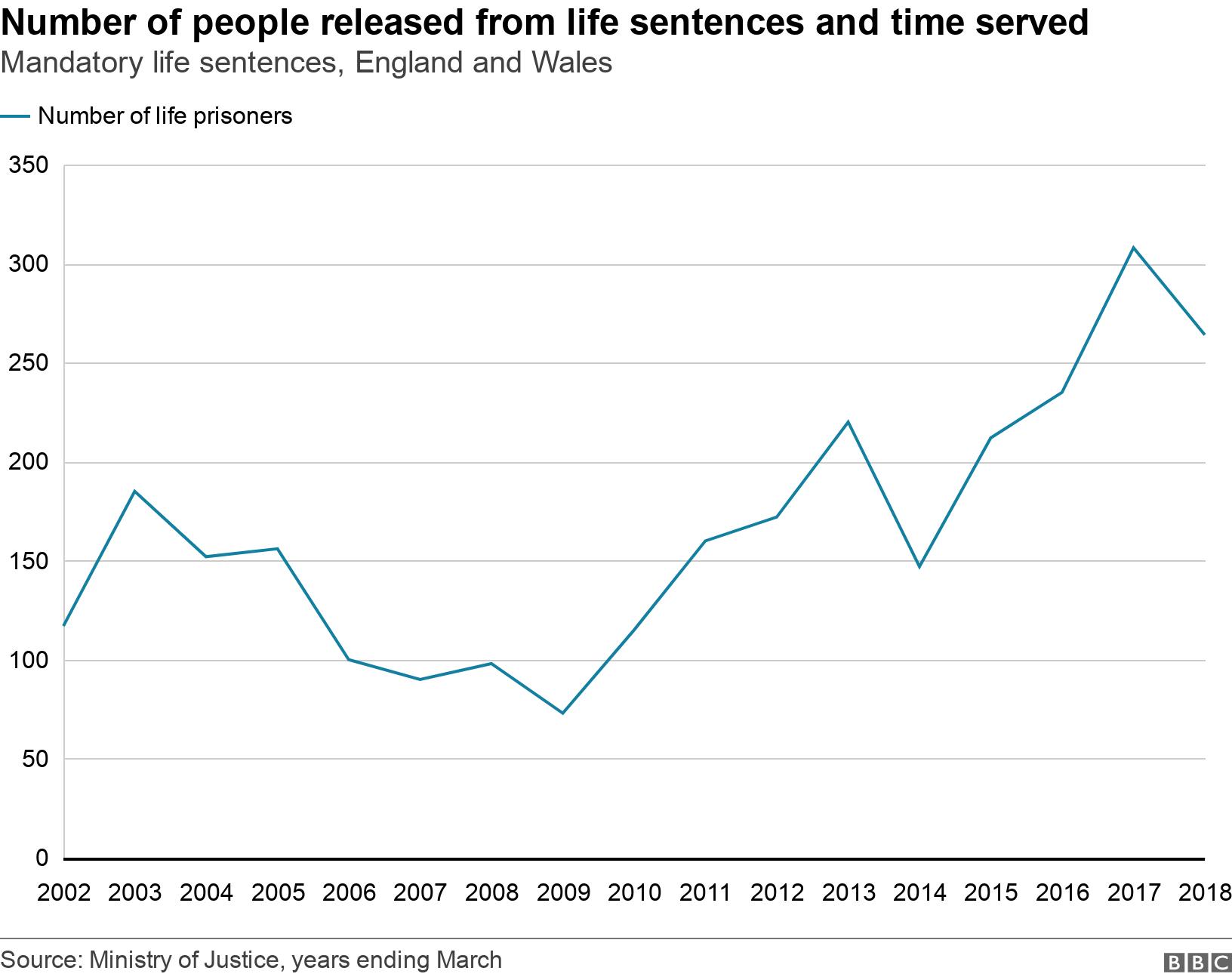 Those convicted of murder will always be given a life sentence. The judge then sets the minimum amount of time they must serve before being considered for parole.

The minimum the judge sets depends on the nature of the murder.

Typical minimum prison terms for murderers over the age of 21 include:

Judges can increase or decrease these set terms based on factors including whether the murderer was provoked or if the crime was premeditated.

Can offenders spend the rest of their life in jail?

Yes, for the most extreme murder cases.

Currently, a whole-life order is also used for the murder of a police officer or a political killing.

They are also used when a child has been killed in the most extreme circumstances.

There are currently 63 people serving whole life sentences, including Rosemary West, who was convicted of murdering 10 people with her husband, Fred West, and the murderers of Labour MP Jo Cox and Fusilier Lee Rigby.