Can you survive on foraged food?

"I always wonder why people buy blackberries when they are right here outside," says foraging instructor Fabio Godinho, as he plucks the fruit.

Fabio is exploring the hedgerow in Woodmansterne Recreation Ground, a Surrey park commonly known for its sports facilities.

The Banstead common also features an abundance of fresh ingredients, which he says can be used in a range of recipes.

A nearby elder tree offers three crops: the flowers, which make elderflower champagne; the berries, good for a dressing similar to balsamic; and the Jelly Ear fungus, often added to Asian cuisine.

But, while that mushroom would provide a substantial ingredient in a stir fry, would it be feasible to survive solely on foraged food?

As the average person is recommended to eat at least 2,000 calories a day, including 50g of protein, it would not be easy. But foragers say sustainably-sourced wild food can certainly supplement a normal diet.

"I like finding things I couldn't get in the shops," notes Fabio, who leads foraging courses full-time for Wild Food UK in Herefordshire.

Marlow Renton, director of the same company, adds that foraging presents a wide variety of common plants, available both in rural and urban areas, which could be used in place of everyday ingredients.

"You can make cheap, tasty meals and tick off all the food groups, as long as you know how about storage," he says.

"I could make a veggie roast dinner after an hour's walk within the M25. Burdock root grows widely - you could roast that."

And he adds that people would have to drastically reduce their meat intake if eating a foraged-led diet, while also allowing more time for harvesting - and would need to stock up on a range of store cupboard ingredients that would be needed to bulk up meals.

However, with the right knowledge, gourmet mushrooms including chanterelles and porcinis can be found in green spaces in the UK.

These could become a hearty mushroom stroganoff served with rice, for instance.

In terms of salads, common hawthorn leaves, chickweed, wood sorrel and wild rocket are all available.

Dried and ground into powder, greens make nutritious soups or they could be added to breads. The same goes for seaweeds from the coast.

Cherry and plum trees are also widely planted in Britain, with produce often left unpicked. The fruit is ideal for pickles or jams. 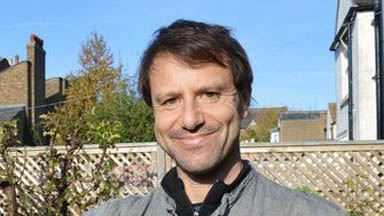 For most, it's a viable supplement to meals

Some professional foragers have found it possible to include protein in their diets.

Over the past few years, Fergus Drennan has experimented with surviving on only foraged food from the Kent and East Sussex countryside - in preparation for a year-long attempt in 2020.

He says oysters gathered on the coast were his main protein source during these month-long challenges, alongside the occasional rabbit or pheasant he discovered already dead.

"If you know what you are doing you could survive, but it requires a lot of knowledge to stay safe," says Fergus.

"For most, it is a viable supplement to meals."

The trend for foraging has grown since the turn of the century, largely due to various celebrity chefs.

These notably include the River Cottage's Hugh Fearnley-Whittingstall and Danish chef René Redzepi of Noma, four-time winner of the world's best restaurant award, which has previously served up foraged moss and ants on the menu.

Many restaurants have since added wild food to menus, but it is not without criticism, particularly in terms of "picking-for-profit".

Under the Wildlife and Countryside Act picking on common land is only allowed for personal use, while by-laws are in place to protect certain areas from foraging.

London's Royal Parks saw a 600% rise between 2016 and 2017 in the number of people warned over breaking a ban on foraging in its parks.

Royal Parks expressed concern that the activity was depleting the amount of food available to resident wildlife. Following this, police cautions in the area dropped by more than half in 2018.

Foraging sustainably is a key concern for the team at Michelin-star restaurant The Black Swan in Oldstead, North Yorkshire.

The team, under the direction of head chef Tommy Banks, gather produce such as spruce tips, primroses and wild garlic from its two-acre garden and attached farm.

Head gardener Ben Daniells says it's important not to "take too much of one thing" to protect the plants.

One dessert currently on the menu, "Strawberries and Woodruff", only uses foraged woodruff because it would not be sustainable to harvest the wild strawberries in the local area.

For London artist Ashley Gill, foraging simply offers a way of gathering some free food on her doorstep - a houseboat that she moors in various places around the capital.

"On my way home from work I'm always looking in the bushes," she says.

Ashley adds that she enjoys finding "luxury" items such as wild garlic.

"It's only a small part of my diet, but it is close to home, which is always a good thing."

Elderflowers can be found from around late May to early June.

They can be made into a cordial or elderflower champagne, but they can also be fried in a thin batter to make fritters, served with icing sugar and lemon.

How can $10bn fight climate change?

Meet the voters behind Bloomberg's surge