The first new prison in the £2.5bn programme will be at HMP Full Sutton in Yorkshire, where expansion plans have previously been announced.

The government said the plans showed it was "serious about fighting crime".

The government's focus on law and order will add to speculation that No 10 is preparing for an autumn general election, said BBC political correspondent Jonathan Blake. But Mr Johnson has previously ruled out an election before October 31.

The prison and policing plans for England and Wales follow other recent initiatives from Downing Street about the NHS and immigration. 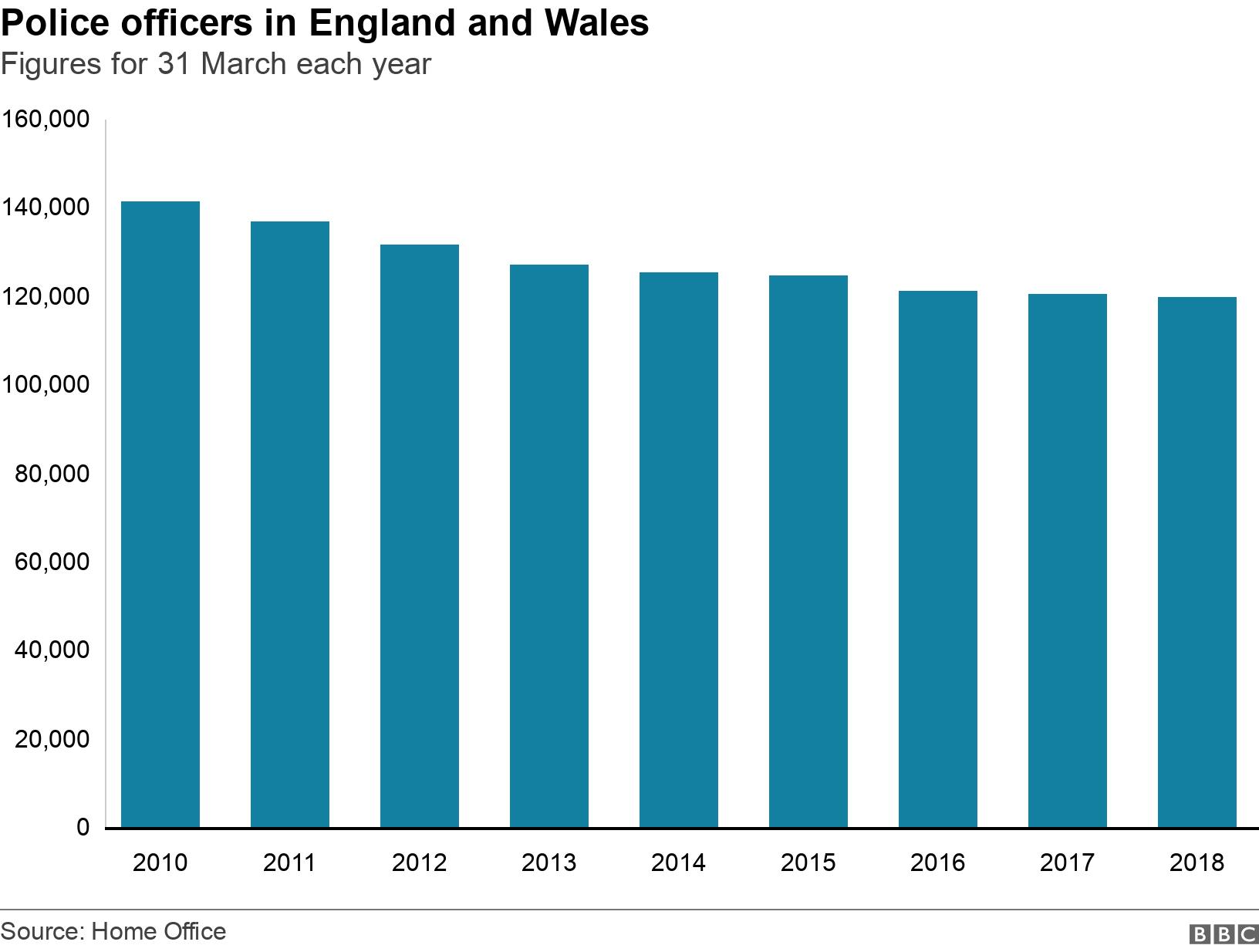 Policing Minister Kit Malthouse told Sky News' Sophy Ridge on Sunday: "We know the greatest deterrent to crime is the perception of the likelihood of getting caught. Prevention is really what we're after."

But on the same programme, Lord Heseltine accused the government of "economic irresponsibility", saying it was "trashing money around the place like there is no tomorrow, aimed very specifically at very clear electoral targets".

What are the plans for prisons?

The 10,000 new prison places are expected to be created by building new jails and expanding existing ones, at a cost of up to £2.5bn.

The first new prison will be built alongside the maximum security jail at HMP Full Sutton, the Ministry of Justice said. But plans already announced there have drawn objections from police, who said it would increase violent crime in the jail.

Previously decommissioned prison venues will also be refurbished and brought back into use, the government said.

Mr Johnson wrote in the Mail on Sunday that the investment was "long overdue".

He also argued that too many serious violent or sexual offenders are coming out of prison long before they should, and tougher sentences were needed.

"I want the criminals to be afraid - not the public."

Is the money for prison places new funding?

The Ministry of Justice said it was on course to create 3,360 places at two new prisons by 2023.

Government sources said the £2.5bn funding would allow it to deliver 10,000 places on top of that, including projects already at a planning stage such as HMP Full Sutton.

But a spokesman for the Prison Reform Trust said the suggestion that all 10,000 places were new was "misleading" given earlier announcements.

The trust said prisons needed 12,000 more places just to eliminate overcrowding and accommodate new prisoners who have already been sentenced.

"We know the aggressive rhetoric of 'prison works' invariably drives up the use of imprisonment long before the capacity to deal with that has been created," said Peter Dawson, the trust's director.

"Tough rhetoric is no substitute for understanding the evidence."

How is stop-and-search changing?

A pilot scheme making it easier for police to search people without reasonable suspicion, in places where serious violence may occur, is being extended to all 43 forces across England and Wales.

The latest move will see restrictions over using section 60 stop-and-search lifted more widely, giving officers across England and Wales a limited time period to search anyone in a designated area in order to prevent violent crime.

Inspectors will now be able to use section 60 without seeking the authorisation of a senior officer and there will be a lower threshold for its use, with police only needing to reasonably believe that violence "may" occur, not that it will.

The Home Office and Number 10 said their decision to extend stop-and-search was based on "initial feedback" from the three-month trial in seven areas.

Home Secretary Priti Patel said: "Stop-and-search works. We hear again and again from police that [they] need to be empowered."

She said powers needed to be used in the "right, legal and professional way" but their use was supported by families of victims of knife crime, from "communities that have suffered so much trauma and pain".

The announcement comes days after a police officer was stabbed in the head with a machete in east London.

Why are some people concerned about stop-and-search?

Stop-and-search powers have been controversial for many years, with evidence that they are sometimes misused and that they disproportionately target black people.

In 2017-18, black people were 9.5 times more likely to be searched than white people, a gap which has grown in recent years.

Jonathan Hinds, who campaigns against its misuse, told BBC Radio 5 Live he had been stopped three times within a mile by three different police officers.

He warned black people faced being "targeted by these draconian powers".

Elena Noel, co-chair of Southwark's anti-knife crime forum, said action was needed to halt the "crisis" but "independent data does not show that stop-and-search stops knife crime and violence".

A study of stop-and-search over a decade in London by the College of Policing found it to be "inconsistent" and "weak" as a deterrent.

Labour accused the Conservatives of trying to "appear tough" instead of dealing with the root causes of crime.

Ms Abbott said evidence-based stop-and-search was an important tool, but "random stops have only poisoned police community relations" and were a "tried and tested recipe for unrest".

A pledge that hints at a general election?

These announcements may address public concern about violent crime and follow the priorities Mr Johnson set for his government on day one.

But they are also the type of promises the prime minister would like to point to during an election campaign.

And the announcements, coming in such quick succession from the government, add to the sense that it is preparing to go to the polls.

Whether the prime minister is forced into it through a vote of no confidence, or chooses to call for one himself, there is an increasing sense that an election isn't far away - either before or after the Brexit deadline of 31 October.

Promising to do something is one thing, but paying for it and delivering it is another - and with these policy announcements comes an increasing bill for the Treasury to foot.

Tax rises or extra borrowing are a much harder sell for MPs campaigning on the doorstep, so we might have to wait some time to find out exactly where the money's coming from.

What are the police saying?

The Police Federation of England and Wales, which represents police officers, said it welcomed forces across the country being given the same tools to tackle knife crime.

John Apter, the federation's national chairman, said: "We can't have a postcode lottery on keeping the public safe."

"We are in the grip of a wave of violent crime on a scale we've not seen before, with young people being killed or stabbed on our streets, and we have to do something about it," he told BBC Radio 5 Live.

He acknowledged concerns about stop-and-search and said police officers would be as professional as possible, with many wearing body cameras.

But he said they also had to respond to people who could be "incredibly hostile, aggressive and violent".