With time running out for the UK and EU to reach a trade agreement - and with the prospect of no deal looming - the government has been talking about an "Australian-style" relationship with the EU in the future.

Boris Johnson has frequently mentioned Australia, and has also said the UK should "get ready to trade on WTO terms".

Whichever form of words you use, they are euphemisms for the same thing: a no-deal outcome.

Australia trades with the EU under the basic rules of the World Trade Organization (WTO) because it does not currently have a free trade agreement with the EU. But it is trying to negotiate one.

"Australians wouldn't regard our trade relationship with Europe as a satisfactory one," the former Australian prime minister, Malcolm Turnbull told the BBC. He warned the UK to"be careful what you wish for".

So how does Australia trade with the EU?

Under WTO rules, tariffs (or taxes) are automatically applied to the trade in goods between Australia and the EU.

But even though there is no overall free trade deal, the two sides do have a series of agreements on things like wine exports and product standards, which make trade a little easier.

If the UK's talks with the EU were to break down abruptly, the UK would not have any such agreements.

With no deal, in other words, the UK would be facing an even more limited trading relationship with the EU than Australia has (the strictest limits would be on trade involving Great Britain - Northern Ireland would be treated differently).

Australia is on the other side of the world, whereas the UK is the EU's next-door neighbour. That means Australia doesn't do nearly as much trade with the EU as the UK does.

And it doesn't rely on the EU, in the way the UK does, for the operation of just-in-time supply chains in sectors such as cars, pharmaceuticals and food.

So, border checks and delays - which happen much more when you don't have trade deals - have far less impact on EU-Australia trade than they would on EU-UK trade.

Even so, Australia is trying to upgrade its relationship with the EU - the two sides have been negotiating a free trade deal since 2018.

Mr Turnbull told BBC Question Time, "Australians would not regard our trade relationship with Europe as being a satisfactory one...there are very big barriers to Australian exports of agriculture products in particular and a lot of friction in the system in terms of services."

How does trade between the UK and the EU work now?

The EU is the UK's biggest single trading partner. In 2019, it accounted for:

As an EU member state, the UK was part of its trading system - the customs union and the single market. This means there are no tariffs on goods, and minimal border checks.

Because of the post-Brexit transition period, the UK is still in this system until the end of December.

Both sides have until then to reach a new free-trade agreement, which would get rid of tariffs and quotas (limits on the number of goods traded) but not new border bureaucracy.

If they can't, then they'd have to trade on WTO rules - as Australia does.

What is the WTO?

The WTO is the place where countries negotiate the rules of international trade - there are 164 members and if they don't have free-trade agreements with each other, they trade under basic "WTO rules".

Every member has a list of tariffs and quotas that they apply to other countries with which they don't have a deal. These are known as WTO schedules.

Don't other countries trade with the EU on WTO rules?

Yes, examples include the United States, China and Brazil.

In fact, it's any country with which the EU has not signed a free-trade deal. That's when WTO rules kick in.

But, like Australia, those big economies don't just rely on basic WTO rules - they have all done other deals with the EU to help facilitate trade.

The US, for example, has at least 20 agreements with the EU that help regulate specific sectors, covering everything from wine and bananas to insurance and energy-efficiency labelling.

Why is the government talking about Canada?

The government has said repeatedly that it wants a free-trade deal along the lines of the one the EU has with Canada.

But the UK and the EU have been trying to negotiate an agreement that would have no tariffs or quotas at all.

Whereas the EU's deal with Canada does include tariffs and quotas (on some agricultural produce for example) and it had to be negotiated line by line over a long period of time.

What happens if there's no trade deal?

Under WTO rules, tariffs would be imposed on all imported goods, apart from in Northern Ireland, which is subject to a separate agreement with the EU.

The average EU tariff is pretty low (about 2.8% for non-agricultural products) but in some sectors tariffs can be quite high.

Cars coming from manufacturers in the UK would be taxed at 10%, with some agricultural tariffs even higher - rising to an average of more than 35% for dairy products.

This would have a big impact on some UK businesses selling their goods to the EU.

What would the UK do?

The UK would do the same, and impose its tariffs on imported EU goods which would have a big impact on some European companies.

The government has already released details of the tariffs it will charge from January 2021 to countries with which there is no free trade deal.

In some areas, they will be imposed to protect British producers - in the car sector, for example, and on most agricultural products, to avoid "additional disruption for UK farmers and consumers". That will lead to higher prices in the UK for some EU goods.

But the government is also removing some of the tariffs it has been charging as part of the EU - in areas, for example, where there isn't that much domestic UK production that needs protecting.

Here are some items that are having their tariffs cut to zero. 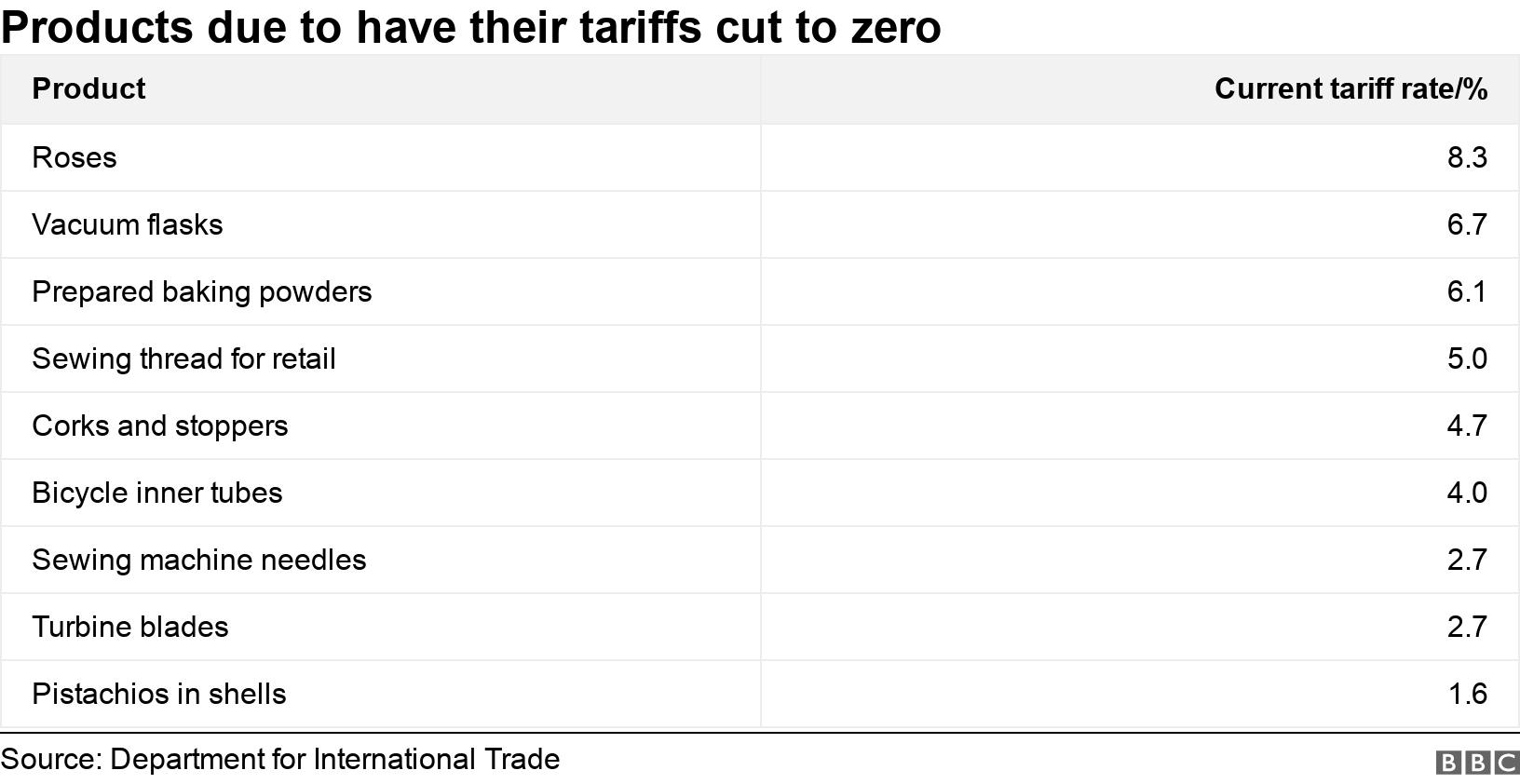 It's important to remember that the WTO's "most favoured nation" rules limit room for manoeuvre in the event of no deal.

The UK couldn't for example lower tariffs for the EU alone, in order to keep trade going. It would have to treat the rest of the world in the same way, which could lead to cheap imports flooding the UK economy, and harming domestic businesses.

It's not just about tariffs - there are also what are called "non-tariff barriers". In many areas of the economy they are far more important.

Non-tariff barriers include things like product standards, safety regulations and sanitary checks on food and animals. Many of them will apply with or without a deal, but businesses that trade with Europe fear that no deal in particular would lead to lengthy delays and extra costs.

Eventually negotiations on some kind of deal would have to begin again, but that could take some time.

All of this refers only to the trade in goods.

The trade in services between the UK and the EU is also of critical importance. The kind of trade deal the two sides have been trying to negotiate wouldn't say very much about services anyway.

But no deal would be an even greater challenge.

And companies on both sides would be having to adjust to an abrupt change at the same time as trying to deal with the impact of coronavirus.

What questions do you have about Brexit?