Police are appealing for information as they try to establish whether Westminster attacker Khalid Masood acted alone or was directed by others.

They said the investigation would focus on Masood's "motivation, preparation and his associates".

His fourth victim has been named as Leslie Rhodes, 75, from Clapham, south London - one of three people killed by Masood's car on Westminster Bridge.

Police have now released seven of the 11 people arrested since Wednesday.

The Metropolitan Police said they had been released "with no further police action".

A 32-year-old woman, who was arrested in Manchester, has been released on bail until late March.

A 39-year-old woman, from east London, had already been released on bail until late March.

Those still in custody are:

Earlier, in appealing for information from the public, Mark Rowley, of the Metropolitan Police, said they would investigate whether Masood "acted totally alone inspired by terrorist propaganda, or if others have encouraged, supported or directed him".

The assistant deputy commissioner added: "There might be people out there who did have concerns about Masood but did not feel comfortable for whatever reason in passing those concerns to us."

Fifty people were injured in Wednesday's attack, with 31 receiving hospital treatment. Two are in a critical condition, and one has life-threatening injuries.

The injured include Andreea Cristea, who had an operation for a blood clot on her brain after Masood's car hit her on Westminster Bridge and knocked her into the River Thames.

Romania's UK ambassador told the BBC that Ms Cristea's boyfriend Andrea Burnaz, who was also injured, had been planning to propose later that day.

Two officers remain in hospital with "very significant" injuries, one of whom has been identified as PC Kristofer Aves.

PC Keith Palmer, 48, died on Wednesday after being stabbed by Masood.

On Friday evening it was announced that Tobias Ellwood, the MP who battled to save the life of PC Palmer, and security minister Ben Wallace have been appointed to the Privy Council - the historic group that advises monarchs - in recognition of their responses to the attack.

Of those killed on Westminster Bridge, Aysha Frade, a teacher in her 40s, and US tourist Kurt Cochran, 54, died on Wednesday, while Mr Rhodes, a retired window cleaner, died on Thursday evening when his life support machine was turned off. 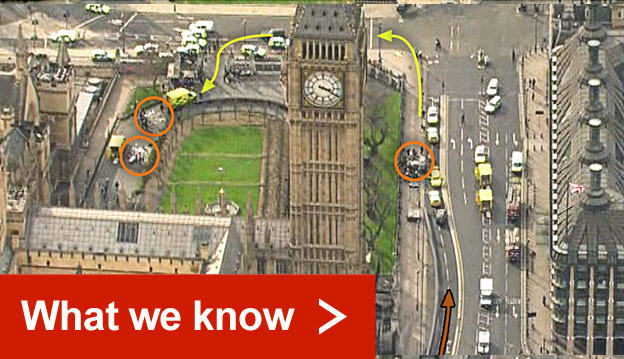 Masood, 52, had driven his car onto the pavement and into pedestrians on Westminster Bridge, before crashing the vehicle into railings and running into the grounds of Parliament.

He was armed with a knife and stabbed PC Palmer, before being shot dead by police.

The Metropolitan Police said Masood, who had a number of previous convictions but none for terrorism, had used a number of aliases.

Stuart Knight, a classmate of Masood's at Huntleys Secondary School for Boys in Tunbridge Wells, said he was a "fun guy, always laughing, always joking".

Mr Knight added that Masood "worked reasonably hard, [was] good at sport, played rugby very well. Just an unassuming guy. Nothing extraordinary about him at all".

In the early 2000s, Masood had been convicted of causing grievous bodily harm after slashing a man across the face with a knife in a pub.

Masood was believed to have been living in the West Midlands before Wednesday's attack, but had previously spent time in Luton, Crawley, in West Sussex, and Rye and Eastbourne, both in East Sussex.

He worked in Saudi Arabia for a period, understood to be about 2008.

The Royal Embassy of Saudi Arabia said Masood had been in the country from November 2005 to November 2006 and April 2008 to April 2009, during which times he worked as an English teacher.

In 2015, he obtained an Umra visa - allowing pilgrimage to Mecca - and was in the country from the 3 to 8 March.

The night before the attack, Masood had stayed at the Preston Park Hotel in Brighton.

Manager Sabeur Toumi told the BBC he had checked in as Khalid "Masoud" and said he had come from Birmingham to visit friends.

Mr Toumi said Masood had been "friendly and smiley", while the hotel receptionist noted on their system he was a "nice guest".

During their investigation, detectives have seized 2,700 items, including "massive amounts of computer data".

Three vehicles were seized by police after an armed raid on a house in Winson Green, Birmingham.

It has emerged that a house searched in Carmarthenshire belongs to Masood's mother, although police said nobody at the property was a suspect.

Get news from the BBC in your inbox, each weekday morning

Boris Johnson aide Dominic Cummings is under fire after saying he does not regret controversial lockdown trips.

I don't regret what I did, says Cummings 'Virus may be here for year' so schools must open