The Queen smashed a bottle of single malt whisky against the nation's new aircraft carrier as she officially named it HMS Queen Elizabeth. It was a key moment in the project to build two new carriers that has attracted criticism over its £6.2bn cost and its level of ambition.

Even on a windy summer's day in Rosyth dockyard in Fife, HMS Queen Elizabeth is unmistakeable.

The 65,000-tonne aircraft carrier - the UK's biggest ever warship - looms over the shipyard where it was assembled and fitted out, dwarfing its predecessor HMS Illustrious, berthed alongside her for comparison.

The new carrier and its sister ship are a £6.2bn project first conceived in the 1998 defence review at a third of the cost.

The estimate by the time the contract was signed in 2007 was just over £3bn.

Along the way, there have been U-turns and doubters galore. But at the naming ceremony, five years after the first metal was cut, the focus will be not on the cost but what the ship means for the UK, and the nation's place in the world.

HMS Elizabeth produces - and with luck, her sister ship will produce - a whole range of choices, which starts with the slightly ethereal business of offering governments a choice of how they play things on the world stage

During the build, more than 10,000 people at shipyards and suppliers across the UK have been employed, and the pride felt by the workforce is tangible.

David Wassell is a painter, paint-sprayer and blaster from Newcastle, who has worked on many other ships, but never anything on this scale.

"It's the Queen Elizabeth, after all, and the build has all been amalgamated with the other yards and everyone's been working together. I think it's fantastic."

Although the carrier, with a flight deck, and another nine decks below, is much bigger than the Invincible class it replaces, the crew won't be - just 679 in total, similar to its predecessor. They will have a GPS system to help them find their way around.

"The ship is really impressive, and also very capable. Her highly mechanised weapon handling system is unique, and it allows us to operate the ship with a lean crew," Lieutenant Commander Harvie Montgomery said.

"It's a real privilege to be part of the first ship's company - I'll always be the ship's first training officer, and I'm really looking forward to the rest of my stint here."

The glossy videos about the carrier that will be played at her naming ceremony also feature its sister ship the Prince of Wales, although it is not yet clear whether the government - in the next defence review - will find the money to run both carriers.

The head of the Royal Navy, the First Sea Lord, Admiral Sir George Zambellas, has been a strong advocate for both, not least because running only one would leave the UK with lengthy gaps thanks to refits.

"HMS Elizabeth produces - and with luck, her sister ship will produce - a whole range of choices, which starts with the slightly ethereal business of offering governments a choice of how they play things on the world stage, alongside major partners in alliance, right down to producing force from her decks, or humanitarian support and it offers us a huge range of options from the strategic to the tactical," he said.

"It is also a sign to our strategic partners, from America to France and to Europe, that shows them that we are taking our responsibilities seriously, and that's a sign of our strategic leadership. And with leadership, we have responsibility - and the Royal Navy takes that very seriously indeed."

However, critics of the project have long criticised it for its cost and the scale of its ambition.

Not only are these the UK's biggest ever warships, but the stealth aircraft due to go on board - the Lightning II - is turning out to be the most expensive warplane ever developed by America and its partners, and is still suffering technical difficulties as it is developed.

The chief of the Air Staff, Air Chief Marshal Sir Andy Pulford, agrees it is a "very ambitious" aircraft.

The RAF is taking the lead on bringing it into service, although each squadron of F-35B Lightning IIs will be joint with the Fleet Air Arm, with the first flight trials on board HMS Queen Elizabeth due in 2018.

"It's a hi-tech, latest generation aircraft, and any of these large programmes come with frustrations and challenges along the way. But I'm confident that we're on track to make those timelines.

"The important thing now for the Royal Air Force is that we're looking forward, and I see that we are growing in the future," he said.

"The arrival of Lightning II will take the RAF and the Fleet Air Arm into a whole new area of capability."

'Eggs in one basket'

But what of the criticism that has often surrounded this project, both within and outside the Ministry of Defence - including within the navy itself?

Professor Michael Clarke, the director general of the Royal United Service Institute, explained: "The fact is, the carrier is going to be a first class carrier.

"It will be a strike carrier that will project power around the world.

"However, it will require most of the Royal Navy to support it and protect it, so it means we will in a sense design the navy around one carrier battle-group. That is pretty powerful, but it means putting a lot of eggs in one basket."

There are fears among some in defence that other crucial areas such as manpower - not least within the UK's already shrinking Army - may suffer as a result of the proportion of the defence budget devoted to big-ticket equipment projects such as the carriers and the fighter jets over the coming years, along with the cost of replacing the UK's nuclear deterrent.

The previous Chief of the Defence Staff General Sir David Richards recently expressed his worry over the declining size of Britain's forces, even as the UK builds what he called its "huge" carriers.

However, Rear Admiral Chris Parry, author of Superhighway: Sea Power in the 21st Century, insists the UK is right to focus on the maritime.

"The 'great game' has always been and will always be at sea, because in a connected world, with 70% of the world covered by the sea, it is the great connector for trade, warfare and many other ways of doing business together.

"It's also a route for criminality terrorism, refugees and things like that.

"So unless a country has a navy that's prepared to be out there, doing business on a daily basis, it will lose traction with regard to globalisation, and it will find that other countries will fill the gap left by them."

So the nation's future flagship being named in Fife today bears much more than its 65,000 tonne weight - it also carries Britain's hopes of remaining globally relevant on the world stage of the future.

And, for the next 50 years, it may well embody the UK's wish to project power across the world's oceans, for a nation that has perhaps not yet lost its appetite for making its voice heard far across the seas.

Explore the zoomable image below to see how a QE Class aircraft carrier (left) would compare in dry dock alongside HMS Illustrious.

You need JavaScript to use this deep image zoom application. 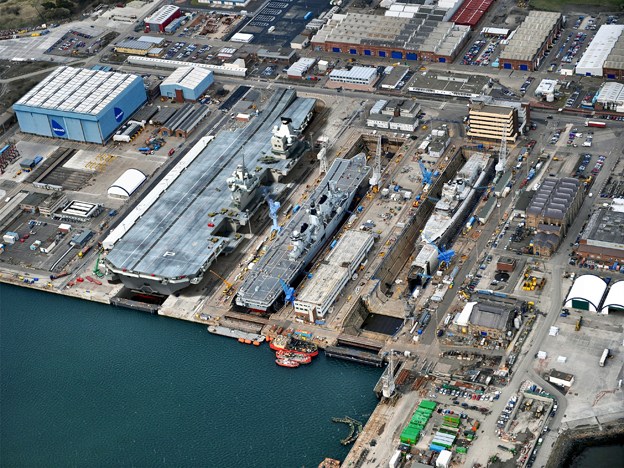