The UK has been battered by strong winds and lashed by heavy rain in a series of ferocious storms that have barrelled across the Atlantic.

The storms, which began in October last year, have forced many from their homes and are set to make the 2013-14 winter the wettest on record. More than 5,000 homes and businesses have been flooded and many rivers in southern England have reached their highest ever recorded levels.

Scroll down to see a visual timeline of the winter storms.

At the height of the storm, a top wind speed of 99mph was recorded on the Isle of Wight.

A series of major storms went on to batter the country, starting on the 5 and 6 December, causing disruption for many as the strong winds and rain brought down power lines, flooded homes and triggered landslips.

Thousands of people were evacuated and England's east coast experienced the worst tidal surge in 60 years. 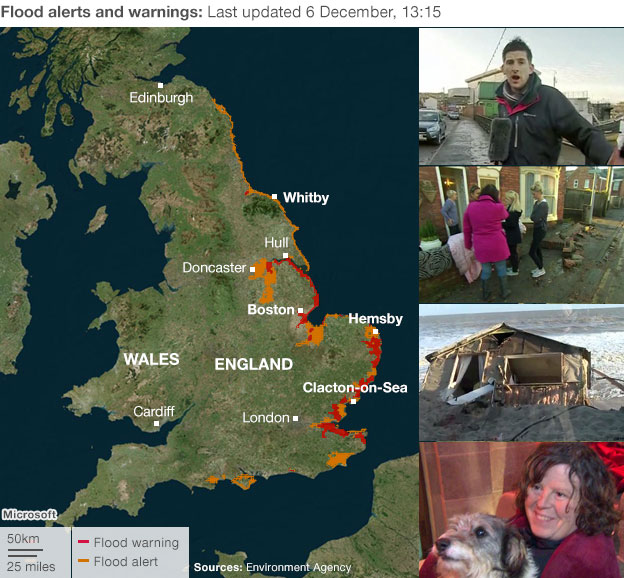 The Environment Agency warned of flooding on the Somerset Levels and alarm bells rang for the Local Government Association which urged people to look online for details of emergency accommodation in case they were forced out of their homes by rising water levels.

4. A stormy December: Month in review

Met Office figures showed the month was one of the windiest since January 1993. The figures were based on analysis of wind speeds above 50 knots (58mph) at a number of weather stations in the UK.

Homeowners on the inundated Somerset Levels began to be evacuated. As the month progressed, anger grew and residents accused the Environment Agency of neglecting the rivers.

Along the coastline, the landmark rock arch in Porthcothan Bay in Cornwall was reduced to rubble and in Portland, Dorset, a rock stack off the coast, known locally as Pom Pom rock, was washed away.

As rain continued to fall and floods worsened, a "major incident" was declared in late January by two councils - Somerset County and Sedgemoor District - in a bid to mobilise extra support. This included a request to the armed forces to consider helping those who had been cut off.

Environment Secretary Owen Paterson visited the area and was confronted by angry residents lambasting a failure to dredge the rivers.

Prime Minister David Cameron later announced rivers in Somerset would be dredged once all floodwater had drained off the Levels and the river banks were safe.

7. A record January: Month in review

Like December, January ended up breaking records for rainfall.

Parts of England had their wettest January since records began more than 100 years ago. The Met Office said much of southern England and parts of the Midlands had seen twice the average rainfall for January.

Another major storm in early February forced more people from their homes, left thousands without power and destroyed a stretch of railway,

A section of the sea wall in Dawlish, Devon, collapsed and left the railway to Cornwall suspended in mid-air.

Further flooding across the Somerset Levels left farmland and businesses under water and forced more residents to evacuate their homes. 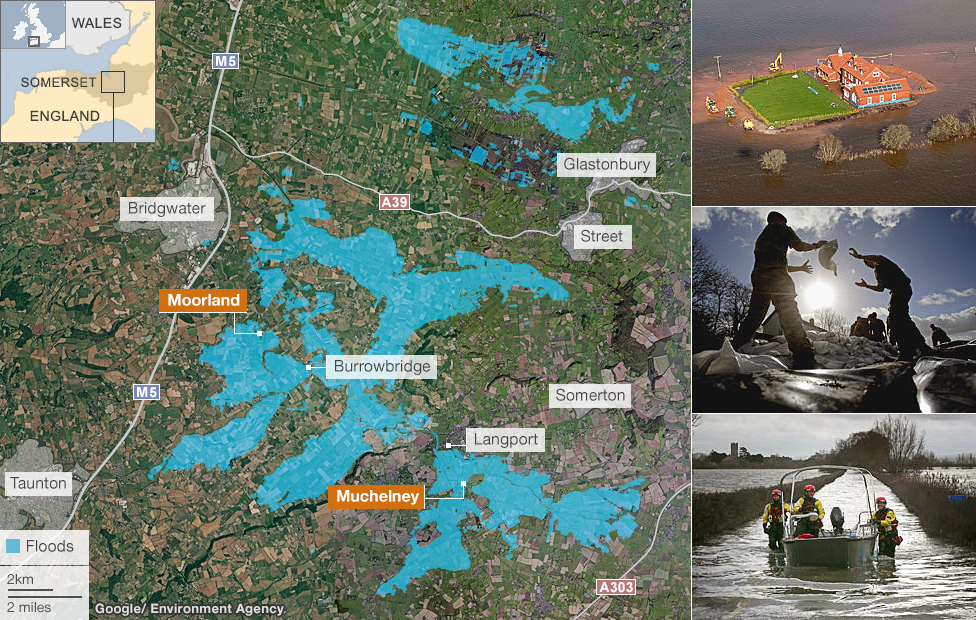 Gales continued to batter southern parts of the UK, with coastal areas hit by wind and rain. Gusts reached 80mph on the coasts of Cornwall, the Bristol Channel and west Wales.

Landslips and floods meant all rail routes into south-west England were blocked.

In Surrey, the River Thames burst its banks at Chertsey, with homeowners warned to expect flooding.

An the month continued, more bad weather arrived. Thousands of properties in Wales were left without power following winds of up to 112mph.

Severe flood warnings were in place in parts of Cornwall, Gloucestershire, Somerset, Berkshire and Surrey.

Flooding along the Thames continued to force people from their homes, as the river reached its highest level in 60 years.