British criminal Ronnie Biggs, who took part in the 1963 Great Train Robbery, has died aged 84, his spokeswoman has confirmed.

Biggs was part of the gang which escaped with £2.6m from the Glasgow to London mail train on 8 August 1963.

He was given a 30-year sentence but escaped from Wandsworth prison in 1965.

In 2001, he returned to the UK seeking medical help but was sent to prison. He was released on compassionate grounds in 2009 after contracting pneumonia.

Train driver Jack Mills was struck over the head during the robbery and never worked again. He died in 1970.

Biggs, who died early on Wednesday, was being cared for at the Carlton Court Care Home in East Barnet, north London.

He could not speak and had difficulty walking after a series of strokes.

He was last seen in public at the funeral of his fellow Great Train Robber, Bruce Reynolds, in March.

Christopher Pickard, ghost writer of Biggs's autobiography, said he should be remembered as "one of the great characters of the last 50 years".

He told BBC Radio 4's Today programme his friend was "a very kind and generous man with a great sense of humour".

Biggs was "one of the first products of the media age" who "inherited fame while running around the world," he said.

Anthony Delano, who wrote a book about Biggs, met the criminal a number of times.

"He was a man with no moral compass whatever," he told BBC Radio 5 live.

"He was a small-time crook who probably would have ended up in prison for a greater part of his life anyway.

"I think he was lucky actually to have so much of it free."

And Mick Whelan, general secretary of train drivers' union Aslef, expressed sympathy for Biggs's family but said: "We have always regarded Biggs as a nonentity and a criminal who took part in a violent robbery which resulted in the death of a train driver."

"Jack Mills, who was 57 at the time of the robbery, never properly recovered from the injuries he suffered after being savagely coshed by the gang of which Biggs was a member that night."

Biggs, Reynolds, Ronald 'Buster' Edwards and the other gang members wore helmets and ski masks to carry out their crime, which took place near Cheddington, Buckinghamshire.

"I squandered it totally - within three years it was all gone," he said.

Since then he had been "living on my name only," he added.

He said it was "totally regrettable" that train driver Jack Mills has been injured during the robbery.

"I regret it fully myself - I only wish it would not have happened but there's no way that I can put the clock back."

But Biggs said he did not regret the robbery and, referring to comments made by the judge in the trial, he said: "I'm totally involved in vast greed, I'm afraid."

Peter Rayner, a former chief operating officer for British Rail who worked with Mr Mills, said: "My view is that whilst I was, and am, critical of the Great Train Robbers and the heroes' welcome they got, especially in light of the death of Jack Mills, my sympathies go out to his family."

Biggs, who lived in Australia and Brazil while he was on the run, had been in prison for 15 months when he used a rope ladder to climb over the prison walls.

He had initially fled to Paris, with his wife Charmian and two sons, Farley and Chris.

He was arrested in Rio de Janeiro in 1974 by Chief Supt Jack Slipper, of Scotland Yard.

But he successfully argued against extradition because he had fathered a son, Michael, by his Brazilian girlfriend, Raimunda.

In 2011, his son, Michael, told the BBC News website his father had a final wish that his ashes be spread between Brazil and London.

The BBC said two film dramas about the robbery - A Robber's Tale and A Copper's Tale - scheduled to be broadcast on BBC One on Wednesday and Thursday, would still go ahead. 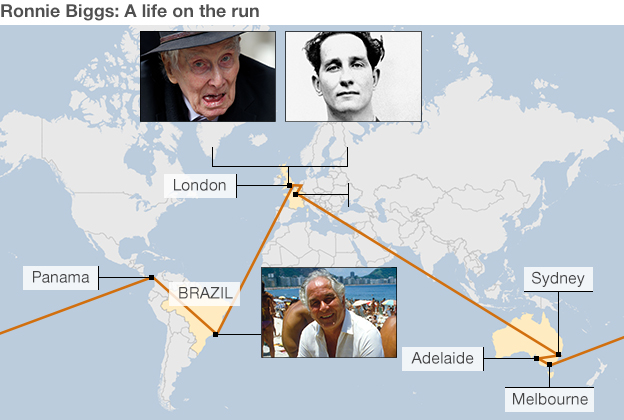 Writer Chris Chibnall said the programmes did not focus on Biggs. The first is from the point of view of Reynolds, while the second tells the story of the police investigation.

"With anything like this your thoughts have to be with the family on a day like today," Mr Chibnall said.

"He has children and obviously it's going to be a very difficult day for them."

He was a greedy criminal "with no moral compass" and yet he's portrayed as some kind of anti-hero. What is it about Britain and our cheeky-chappy cockney bad guys? Matthew Gibbs, Bournemouth, England

It is with deep sadness I write regarding the passing of Ronald Biggs. For those that know me, know that he played a huge part in my life. To me he was a dear close friend and a father figure at times. For nearly 20 years we shared laughs, beers and a few tears. A great train robber he was but a caring and generous man he became. Brian Running, Nicaragua

This man was a criminal whose actions resulted in the death of a man who was simply doing the job he was paid for. My grandfather was a near contemporary of Jack Mills and if he had worked out of a different depot, it could have been him that night. The glorification of these criminals sickens me. Caroline Watson, Hexham, England

So another thief is dead - who cares. Thanks for the BBC for immortalising this man, are we going to have front page coverage of other thieves that have died? Is this what we aspire to? Markey, Watford, Hertfordshire

I meet Ronnie in Brazil at his home in 1995, a gentleman, great host and all around good guy who was in the wrong place at the wrong time. Andy, Miami, USA

He was a common criminal who was involved in injuring a decent hardworking man. It's not glamorous and he should be forgotten and good riddance. Julie Marshall, Bishops Stortford, Hertfordshire,

He does sound like a real character, and a nice man in the end. It's a pity he felt he had to do something like this, and I am sure Mr Mills and his family would agree. Christopher Morrison, Lake Katrine, NY, USA

The guy was a thief and a murderer and he life should not be glamorised in this way. Ben Rattigan, Hartlepool, England

I really wish this man's death had been reported with a passing mention rather than all this publicity. He was not a loveable rogue. He was a nasty, arrogant criminal who should have been left to rot in a Brazilian hospital. This story is taking precedence over the death of a British doctor in Syria whose desire to do good led to his murder. I'm disgusted. Peter, Manchester, England