The Most Reverend Justin Welby has been enthroned as Archbishop of Canterbury.

The 57-year-old was formally sworn in as head of the Church of England and spiritual leader of the 85 million-strong Anglican global communion.

In his first sermon, he said: "There is every possible reason for optimism about the future of Christian faith in our world and in this country."

Prime Minister David Cameron and the Prince of Wales were among the 2,000 guests at Canterbury Cathedral.

Archbishop Welby told them: "The present challenges of environment and economy, of human development and global poverty, can only be faced with extraordinary Christ-liberated courage."

He went on: "Courage is released in a society that is under the authority of God, so that we may become the fully human community of which we all dream." 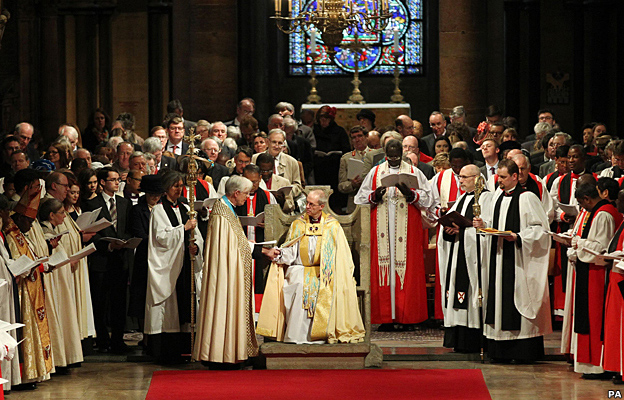 The new Archbishop is sworn in by the Dean of Canterbury, the Very Rev Robert Willis

Holding the cross, the Reverend Dr Jo Bailey Wells is the first ever female chaplain to an Archbishop of Canterbury

The Chair of St. Augustine, made from Petworth marble, has been used for enthronements since the 13th century

The Most Rev Bernard Ntahoturi, Archbishop of Burundi, gave the blessing

Also known as a crosier, the staff is symbolic of a shepherd's crook and is used to knock on the West Door of the cathedral three times

The vestments were a gift to Bishop of Peterborough, Ian Cundy, who died in 2009. Archbishop Welby was a student of Cundy

Some of the Archbishop's children stand behind the Members of the Chapter of the cathedral and the Archbishop of York, Dr John Sentamu

The archbishop acknowledged that people "may properly differ on the degrees of state and private responsibility in a healthy society".

But he said: "If we sever our roots in Christ we abandon the stability which enables good decision-making.

"There can be no final justice, or security, or love, or hope in our society if it is not finally based on rootedness in Christ."

The BBC's Emily Buchanan says the new archbishop put his "personal stamp" on the service.

"Since he was appointed, Justin Welby has made a point of being self deprecating, showing great surprise that he was chosen at all," says our correspondent.

For the first time in history, a woman - the Venerable Sheila Watson, Archdeacon of Canterbury - carried out one of the two enthronements when she installed the archbishop on the diocesan throne in the cathedral, symbolising his appointment as bishop of Canterbury.

He was then sworn in as the Archbishop of Canterbury by the Dean of Canterbury, the Very Rev Robert Willis, on the marble chair of St Augustine.

The service marks the last stage in the Archbishop of Canterbury's appointment following the confirmation of his election in February.

At the start of the service, Archbishop Welby struck the West Door of the cathedral three times with his staff before it was opened to allow his entry.

A young member of the Anglican communion, 17-year-old Evangeline Kanagasooriam, then asked the archbishop, "Who are you and why do you request entry?" and "Why have you been sent to us?"

He replied: "I am sent as archbishop to serve you, to proclaim the love of Christ and with you to worship and love him with heart and soul, mind and strength."

Representatives of the world's major religions were among the congregation for a service blending the traditional and modern, with hymns, African dancers, Punjabi music and improvised organ music.

A strong African element to the service reflected the archbishop's ties with the continent through his former job as an oil executive and most recently in peace and reconciliation work.

Other personal touches included the archbishop's colourful vestments which were originally designed and made for the late Bishop of Peterborough, the Right Reverend Ian Cundy, who was his tutor at Cranmer Hall, Durham, where he trained in preparation for ordination.

The archbishop had tweeted during the build-up to the service. He wrote: "Out early this morning, Canterbury is beautiful, human scale and history falling out of the walls everywhere. Grateful to be here."

Meanwhile, Pope Francis, whose inauguration Mass was on Tuesday, sent a goodwill message to Archbishop Welby.

"I look forward to meeting you in the near future, and to continuing the warm fraternal relations that our predecessors enjoyed," he said.

Archbishop Welby, 57, is married with five children. He went to school at Eton, and later Cambridge University.

He rose to the top of the oil industry - ending up as treasurer of Enterprise Oil - and gave up a six-figure salary to train as a priest.

He was a vicar in Warwickshire, a canon of Coventry Cathedral, and the Dean of Liverpool, before being appointed as Bishop of Durham in November 2011.

The major role played by a female cleric in the service comes just four months after the Church of England General Synod narrowly defeated legislation to introduce women bishops in spite of a speech in favour of women bishops by Archbishop Welby.

Ahead of his enthronement, the archbishop told the BBC that while he supported the Church of England's formal opposition to same-sex marriage, he was "challenged as to how we respond to it".

He acknowledged that some gay couples have loving, stable and monogamous relationships.

"The Church of England holds very firmly, and continues to hold to the view, that marriage is a lifelong union of one man to one woman," he said.

"At the same time, at the heart of our understanding of what it is to be human, is the essential dignity of the human being. And so we have to be very clear about homophobia."