Hundreds of thousands of households across the UK will be affected by changes to benefits from April - part of government plans for the biggest shake-up of the welfare system for decades.

Ministers argue the changes are necessary to tackle the rising cost to the taxpayer and cut the budget deficit. They also say it will simplify the system and provide greater incentives for people to work.

However, charities and opposition politicians say the moves will force families into rent arrears and increase homelessness.

What are the key changes, who will be affected and by how much?

From the end of April, the current system of working-age benefits and Tax Credits will be gradually replaced by a new benefit called universal credit. Millions of claimants will be affected.

Universal credit - which applies to England, Scotland and Wales - will replace:

Across all households, ministers say there will be an average gain of £16 per month.

The transition to Universal Credit will take place in three phases over four years, between 2013 and 2017.

From 29 April 2013, it will be trialled in Ashton-under-Lyne, Tameside, Greater Manchester, before rolling out to Oldham, Wigan and Warrington in July.

The government says the new scheme will mean people are better off in work than on benefits.

From October, more claimants will move on to universal credit as and when they have a significant change of circumstances, such as starting a new job or when a child is born.

Then, from April 2014 until October 2017, the rest of those affected will be moved onto universal credit in stages.

Universal Credit will be rolled out in Northern Ireland from April 2014, six months after rollout in the rest of the UK begins.

For more information about universal credit, visit the Department for Work and Pensions website.

From mid-April, the government will introduce a cap on the total amount of benefit that working-age people (16-64) can receive.

Set at the average earnings of a UK working household, the cap will mean that people of working age will receive up to a maximum amount, even if their full entitlement is higher.

The cap - which will apply to England, Scotland and Wales - is estimated to be £350 per week for a single adult with no children and £500 per week for a couple or lone parent, regardless of the number of children they have.

Ministers had estimated about 50,000 households would be affected by the cap, losing an average of £93 per week.

However, the Department for Work and Pensions now says the number of households affected will be 40,000. The policy was expected to save £275m a year, but will now save £110m.

The government argues the changes to the figures are down to more people finding work.

However, the National Institute of Economic and Social Research says there is "no evidence at all" that the introduction of the cap has been affecting people's behaviour.

The Department of Work and Pensions' original estimates show how lone parents are expected to be the group most affected by the changes, followed by couples with children. 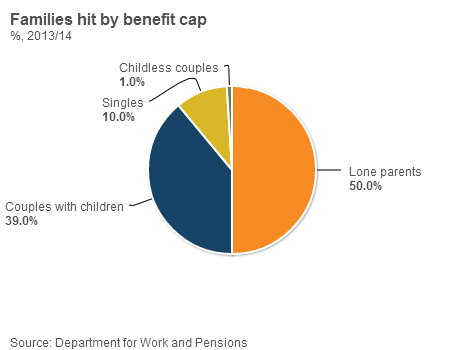 The changes will not affect everyone at once. Four London boroughs - Bromley, Croydon, Enfield, Haringey - will try out the cap from April 2013. Other local authority areas will follow from 15 July, with everywhere affected by September.

The benefit cap is not yet law in Northern Ireland.

To find out how you will be affected, you can use the government's benefit cap calculator, which can be found on the benefit cap information page.

In his 2012 Autumn Statement, the chancellor announced that most working-age benefits and tax credits would be uprated by just 1% - a below-inflation cap - for three years from 2013-14.

Benefits have historically risen in line with inflation and, without any change, would have been due to go up by 2.2% in April.

But the government argues that, with public sector pay rises capped at 1%, a similar limit should apply to working-age benefits such as jobseeker's allowance, employment and support allowance and income support as well as elements of working tax credits and child tax credit.

Lone parents - who have higher unemployment rates - are most likely to be affected, followed by couples with and without children.

For more information on benefit uprating, read our full guide.

A new benefit called the personal independence payment (PIP) will be introduced from April 2013 for people of working age to replace disability living allowance (DLA).

DLA is the biggest disability benefit payment. In nine years, the numbers claiming the benefit have risen from just under 2.5 million to 3.2 million - an increase of about a third.

The changes are expected to reduce spending by about £2.2bn by 2015-16, with one fifth of current DLA claimants expected to be ineligible for PIP.

The government argues PIP will be more efficient and easier to understand than DLA. However, disability groups have condemned the plans as a money-saving exercise, arguing DLA is one of the most effectively targeted benefits with an estimated fraud rate of just 0.5%.

The change to PIP will be rolled out geographically over time. From 8 April, people living in Merseyside, Cumbria, Cheshire and North East England will begin claiming for PIP.

From 10 June, all new claims for disability benefits will be for PIP and not DLA.

Families living in council or housing association accommodation whose property is deemed to be larger than they need will receive less housing benefit from the beginning of April.

Termed the single room subsidy by ministers, or the "bedroom tax" by Labour, the changes will result in £490m savings for the taxpayer in 2013-14.

The government estimates that more than 660,000 claimants will be affected, with an average loss of £14 per week. Families with severely disabled children, foster carers and families of armed services personnel will be exempt.

Couples with no children and older people - those most likely to have spare rooms - will be particularly hit by the changes. The changes will also affect different areas of the country to a lesser or greater degree.

The current system of Council Tax Benefit (CTB), which is claimed by 5.9 million low-income families in the UK, will be abolished from April 2013.

Currently the assessment of CTB is carried out by local councils on behalf of the Department of Work and Pensions (DWP), but the rules are nationally set, and are applied in the same way across the UK.

However, from April 2013, the government will provide funding to local authorities in England and to the Scottish and Welsh governments to design their own systems of Council Tax support, know as Council Tax Support Schemes.

This funding will only be 90% of this year's budget for CTB in each local authority area - meaning that local councils will be expected to find a 10% saving.

The Department for Communities and Local Government estimates more than three million families in England will be affected, losing an average of £2.64 a week (£137 a year).

The government believes the new system will save £420m a year in England alone, as well as give councils increased financial independence and establish stronger incentives for local authorities to get people back to work.

However, critics say the changes mean different levels of support in different parts of the country and that this will prevent people being able to move to seek work.

For more information about changes to council tax benefit, read the government's guide.