A coroner has praised the bravery of a teacher who smashed his way out of a London Tube train to help people dying in a carriage bombed on 7 July 2005.

Timothy Coulson sprung into action after hearing screams coming from a nearby Edgware Road train, the inquest into the deaths of 52 people heard.

He managed to reach a badly injured man but could only close his eyes and pray for him as he died.

Coroner Lady Justice Hallett thanked him and called him "extraordinary".

The college teacher's train had stopped alongside the carriage wrecked by suicide bomber Mohammed Sidique Khan, the inquest heard.

As he entered the bomb scene, he came across father-of-two Michael Brewster, 53, whose lower body had disappeared into a hole blown in the floor.

Mr Coulson climbed underneath the carriage to try to help him, but soon realised he was dying when he did not respond to attempts to communicate nor give him water.

"By that I took it his state of life and health was very weak and perhaps he would not be very long for this world," he told the inquest.

"I felt the remains of the lower half of his body, not all in one piece.

"He shortly after began to fall through the hole in the floor. Then I recall feeling that was the point at which he had died."

The teacher described how he then lowered the civil engineer from Derby through the hole to the track below before becoming acutely aware that his eyes were open.

He said: "I reached forward and I closed them and as I did so I said a prayer for him whether he be a religious man or not, because I felt he had finished with this world and shouldn't be staring at it, and I wished him the very best in this world to take with him into the next."

A lawyer representing Mr Brewster's family, thanked Mr Coulson and said it was a great comfort he was not alone when he died.

Caoilfhionn Gallagher said they thanked him for trying to save him and also for preserving his dignity just after he died.

Mr Coulson, of Henley-on-Thames, Oxfordshire, was appointed an MBE and awarded a bronze medal from the Royal Humane Society after his actions.

Lady Justice Hallett said: "You are an extraordinary man. I remain astonished that you and some of your fellow passengers could break the window, climb through to cross the track and into the bombed carriage to help the seriously injured and the dying.

"Thank you for everything that you did."

Gp Capt Craig Staniforth climbed through a broken window to reach the injured passengers, before using his military training to help them.

"Being a medical support officer in the RAF, these kind of pictures I have seen on a number of occasions but normally from a training perspective, and I suppose as an individual the scenario didn't faze me," he told the inquest.

He said he came across a tired and confused passenger - Professor John Tulloch - who had a head injury and desperately wanted to go to sleep.

"I was very conscious I didn't want him to go to sleep because he had a head injury," Gp Capt Staniforth said.

"My aim was to try and look after John as best I could. The problem was he had this terrible urge to find his briefcase and got terribly agitated he couldn't find it."

After finding it under some of the bodies, he helped the now calmer academic walk out of the carriage.

Lady Justice Hallett told him: "I'm sure the likes of Mr Tulloch and others have every reason to be very grateful for the fact that your military training did kick in the way it did and that you were brave enough to climb though that broken window."

CLICKABLE Find out more about the victims of the Edgware Road bomb attack. 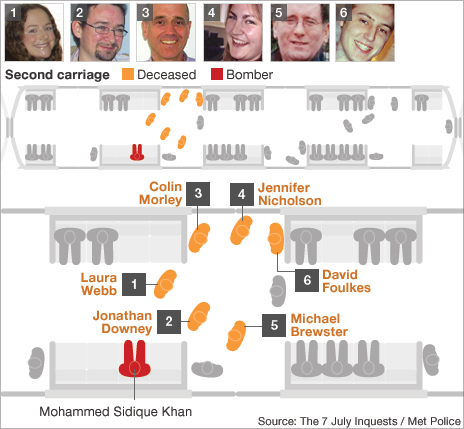 Ms Webb was from Islington in north London and worked as a personal assistant with DDB Europe, an advertising company, based in Paddington. Witness statements indicate that she survived for a short period after the explosion, despite being the second closest to the bomber. A number of passengers tried in vain to save her and to maintain her circulation, with the help of other commuters who shouted instructions.
Read full obituary

Mr Downey lived in Milton Keynes and worked in human resources for the Royal Borough of Kensington and Chelsea, one of the capital's main councils. He and his wife had taken the same train to Euston before parting. His widow said he "lived life to the full and enjoyed the day for the day".
Read full obituary

Mr Morley, a married father of three, was a marketing consultant who used his skills to help charities use the strength of their brands for social good. He was found lying near the body of David Foulkes and the evidence suggests that he was killed in the immediate explosion. Mr Morley's wife later wrote that her husband was so dedicated to helping others that he left "a most magical beautiful light" wherever he went.
Read full obituary

Miss Nicholson was standing by the carriage doors and was blown out of the train by the force of the explosion. The talented musician, who commuted daily from Reading, was working for a specialist music publisher when she was killed. Miss Nicholson did not usually take the train she boarded that day. Problems on her usual line led her to take the Circle Line instead. The evidence suggests she was killed instantly.
Read full obituary

Michael Brewster, known as Stan, was married with two children. The senior project engineer for Derbyshire County Council had been in London for a conference. Fellow passengers made considerable efforts to try save him at the scene, but he succumbed to his injuries. Mr Brewster's family spent a week searching London for him, until police confirmed he was one of the victims.
Read full obituary

Mr Foulkes, from Oldham, was a media sales manager for the Guardian newspaper, based in Manchester, where he lived with his parents and sister. He was making plans to move in with his girlfriend, Stephanie Reid, and she and his family said he was enjoying life and his career. Mr Foulkes was in London for a meeting with a colleague. The evidence indicates he was killed instantly.
Read full obituary