Are colour blind gamers left out?

Next time you are playing a video game online and a member of your own team shoots you - spare a thought: they could be colour blind.

The inability to easily distinguish between certain colours is a problem that affects about one in 20 men, and one in 200 women.

For video gamers, it can mean some parts of games become vastly more difficult - such as when opposing teams are distinguished by the colours red and green, or if other crucial on-screen indicators feature similar shades.

Despite the large numbers of gamers affected, awareness among the development community is comparatively low. Only a handful of publishers make concerted efforts to cater to people with this genetic condition.

Graham Hodson, a gamer from Stockton-on-Tees, was so frustrated at the use of red and green in Call of Duty Modern Warfare 2 that he and his wife started a campaign to get colour blind-friendly features added.

The game, developed by Infinity Ward, part of games giant Activision, was one of the biggest sellers of 2009 and is referred to by critics as one of the best games ever created.

In multiplayer mode, team-mates appear with green tags above their heads, while enemies are in red.

Mr Hodson found that he struggled to play the game online because he simply could not work out who was on his team quickly enough.

"With the pace of the game, taking that extra second isn't really possible," he said.

"Otherwise, I would just shoot at everything, causing our position to be given away on the map and team-mates to be not too happy with me!"

The three images below show screenshots from Call of Duty Modern Warfare, Killzone and Lego Indiana Jones - three games that have caused problems for colour blind players. Drag the slider or click on the buttons above the images below to see how three different types of colour blindness affect viewers.

The enhanced functionality requires Javascript to be enable on your browser 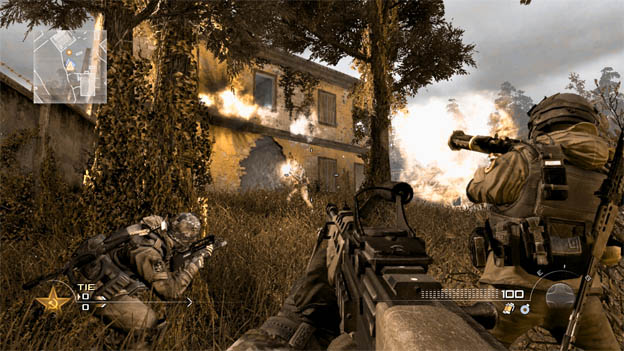 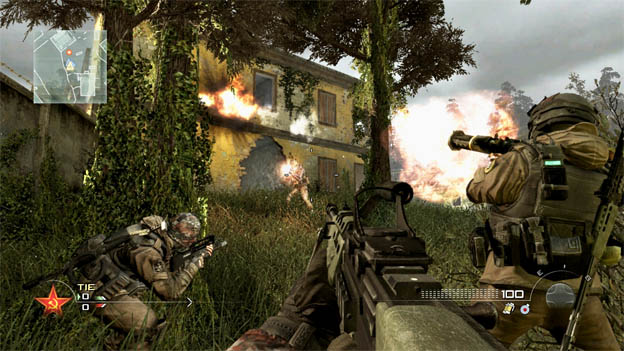 Deuteranopia is the most common kind of red/green colour blindness.

Deuteranopia is the most common kind of red/green colour blindness. 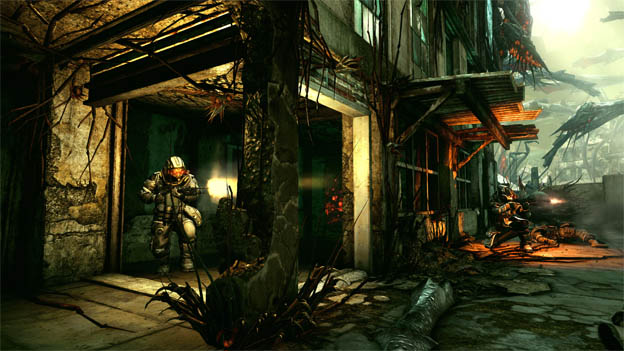 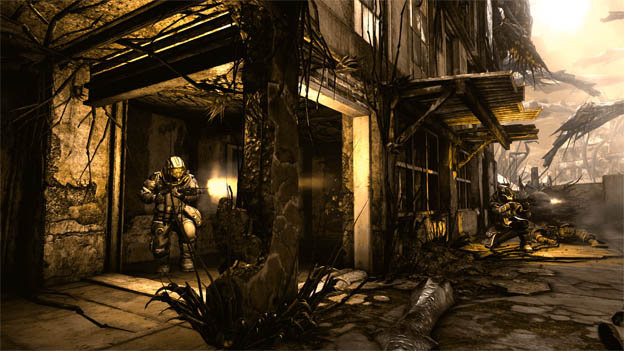 For a protanope, the brightness of red, orange, and yellow is reduced. 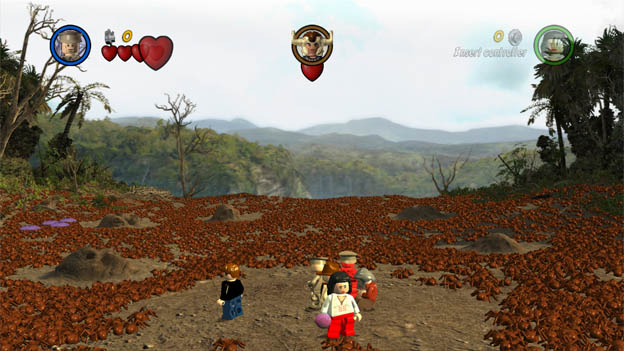 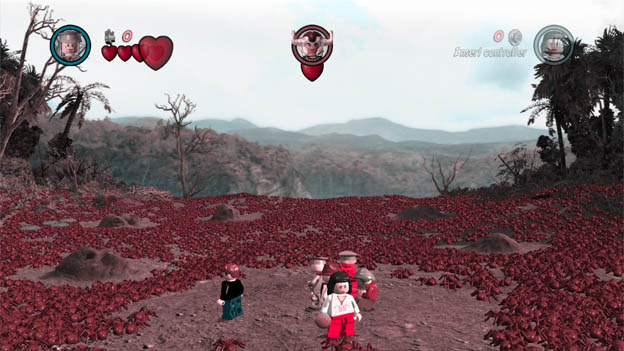 Tritanopia is rare - blue is confused with green and yellow with violet.

Jagdeep Lall, a final-year information systems student at City University, studied colour blind gamers as they used a variety of games. Among them was Formula 1 2010, produced by Codemasters.

Mr Lall discovered that a guide on the race track for when to brake and accelerate was almost useless to colour blind gamers.

"You have a racing line which starts red - for when to hit the brakes - and changes to green as you come out round the corner.

Am I colour blind?

Can you see a number in the image above? If not, you may suffer from colour blindness.

"The gamer [in the study] found he was unsure where it changed from red to green, so he waited a little bit longer until he was sure it was green."

Kathryn Albany-Ward is the founder of Colour Blind Awareness, a UK group seeking charity status. She said that examples like this were common, not just in games, but in other walks of life.

Her colour blind son had great difficulty carrying out some of the puzzles featured in Lego Indiana Jones.

She believes that games companies should be doing more to cater for the condition, and that in cases where a game has colour-dependent features, warnings should be placed clearly on the box.

"I think they have a duty to do it because of the numbers [of people] involved," she said.

"It's like a 'contains traces of nuts' label, so at least you know you're not wasting your money."

"I think that's something that should maybe become industry standard.

"It's a shame for someone who's spent £40-£50 on a game which they didn't know they were going to have so much difficultly playing. It's not even enjoyable."

A source at PEGI - the group which rates games for objectionable content - told the BBC that colour blindness, like other disabilities, would not come under their rating remit.

However, David Vonderhaar, lead programmer at Treyarch, had a different suggestion.

"Have good design that lets the game have multiple visual clues and uses colour in a way that's beneficial but doesn't restrict colour blind gamers. It's frankly not that hard."

Treyarch, also part of Activision, is responsible for Black Ops, the most recent incarnation of the Call of Duty series and now the biggest-selling game of all time.

"I think it's a big challenge for games designers.

There are thoughts about using coloured lenses and contrast filters within spectacle lenses that try to push the red and green wavelengths further apart.

Even just adjusting brightness or contrast on screens can just push any specific colour problem slightly apart and give you more contrast than you'd normally perceive.

I would have thought the games designers could be given an 'avoid these colours' chart to help most colour blind problems.

You won't solve it for everyone, but you could at least put some effort into the design to make it better. Colour blind people seem to be neglected and forgotten about in the day-to-day world.

It's perhaps not seen as a very sexy place to invest money, but it should be."

Like Infinity Ward's Modern Warfare 2, it uses red and green to distinguish teams.

However, a feature accessible from the in-game pause menu allows players to change the typical on-screen notifications into orange for enemies and a high-contrast sky blue for friends.

"It's all about combining clues. It has to be a combination of profile shape, uniforms, names above their heads. All of these things make a big difference in helping you make that distinction."

Mr Vonderhaar's team's judgement on colour issues is helped by one highly innovative cog in the design process.

"Our lead tester is colour blind," he said.

"Basically we wait for him to be miserable, and if he's not, that's how we know we're getting somewhere. That's almost how simple it is for us."

Activision as a whole does not have a policy regarding colour blind-friendly features in its games. And while previous Call of Duty games by Treyarch have incorporated colour blind aides, others created by Infinity Ward have not.

The publisher would not confirm which developer is creating the next game in the series, widely rumoured to be Modern Warfare 3.

While many gamers find Treyarch's approach refreshing, other games companies are reluctant to follow suit, stressing that it is not as simple as changing the odd colour.

In a statement, Nintendo, famed for its vibrant, colourful games, told the BBC that its developers try to make their games as accessible as possible, but said it was "not possible to cater to the needs of all the players 100% of the time."

Meanwhile Guerilla Games, creators of the multi-million selling Killzone series - another troublesome game for Mr Hodson - said that it was looking at the problem for future updates and releases.

"Changing the colour for one person does not automatically mean that everyone with colour blindness can now see the HUD correctly," explained David Wilson, a spokesman for Guerilla Games' parent company, Sony Computer Entertainment Europe.

"What we are going to do for Killzone 3 is underline all enemies and enemy objects. This will happen within the next month probably.

"This required new code and testing (with colour blind people in the office). We also had to make sure that adding these lines was not so obvious that people without colour blindness could use it to their advantage."

Ms Albany-Ward from Colour Blind Awareness believes that the simplest solution is to increase awareness of the issue and to make sure that colour blind gamers are considered in the design process.

"The only way to convince people to change it is to say 'would you please…' from now on," she said.

"There are so many colour blind people, not knowing how much they're missing because they can't ever see what we can see."

WHO warns of 'no silver bullet' for coronavirus

Progress is being made though, its chief says, as he stresses the importance of preventive steps.