Two satellites developed in Europe and Japan are on their way to Mercury, the planet closest to the Sun.

The joint endeavour, known as BepiColombo, left Earth on an Ariane rocket that launched out of South America.

It will take the probes seven years to reach their destination.

But when they do finally arrive, it is hoped their parallel observations can finally resolve the many puzzles about the hot little world.

One of the key ones concerns the object's oversized iron core, which represents 60% of Mercury's mass. Science cannot yet explain why the planet only has a thin veneer of rocks.

Bepi's high-resolution data should bring us nearer to an answer.

"Mercury doesn't really fit with our theories for how the Solar System formed, and we can't understand our planet fully unless we're able to explain Mercury as well," said Prof Dave Rothery, a Bepi scientist from the UK's Open University.

The probes, which have been stacked together for their long journey into the inner Solar System, lifted clear of the Kourou spaceport at 22:45 local time, Friday (02:45 BST; 03:45 CEST; 10:45 JST Saturday).

Mission controllers based in Darmstadt, Germany, will spend much of Saturday talking to the spacecraft, to confirm they are properly configured for the long cruise ahead. 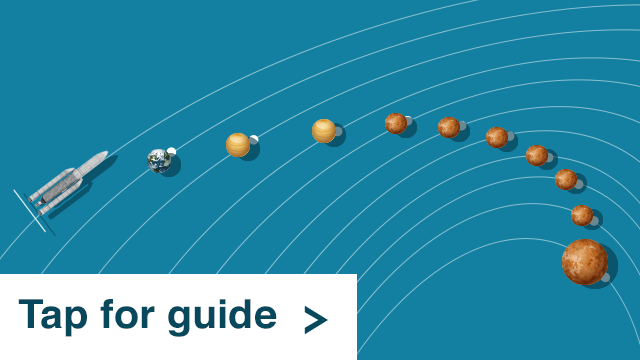 How important is this mission?

It's the first time the European and Japanese space agencies (Esa & Jaxa) have gone to Mercury. The Americans have already been there, briefly with the Mariner 10 probe in the 1970s, and with the Messenger orbiter earlier this decade.

The latter provided remarkable new insights that included the amazing discoveries that water-ice is held inside some of baking Mercury's shadowed craters, and that its crust contains a lot of graphite (pencil lead).

Bepi will build on Messengers' investigations. The new mission carries twice as much instrumentation and will get closer for longer, giving scientists much more detailed information.

What will the probes do?

The MMO will make as its priority the study of the planet's magnetic field. It will investigate the field's behaviour and its interaction with the "solar wind", the billowing mass of particles that stream away from the Sun. This wind interacts with Mercury's super-tenuous atmosphere, whipping atoms into a tail that reaches far into space.

Europe's MPO will map the terrain, generate height profiles, sense the interior, and collect data on the surface structure and composition.

What are the big mysteries?

The origin of Mercury is the question most people want answered. Today's dense body very probably does not reflect the initial form.

It's possible Mercury began life much further from the Sun and only later migrated inwards, perhaps colliding with something else on the way.

This might explain the loss of those outer layers: they got stripped away in the impact. But Messenger observed large abundances of sulphur- and potassium-containing compounds at the surface, and these should have been burnt off in a giant impact.

It's a fascinating world, says mission scientist Dr Suzie Imber from Leicester University. "It's also got huge cliffs, many kilometres tall. And those cliffs formed as Mercury shrank. We call them wrinkle ridges."

Why is it such a long journey?

It is possible to go direct to Mercury in a matter of months, but the speed picked up by a spacecraft falling into the Sun's deep gravity well would make it very hard to stop at the planet.

It will fly past Earth, Venus and Mercury itself, using the tug of their gravity to bleed off speed, so that by 2025 the mission can gently slot into position next to the diminutive world.

How challenging is this project?

The toughest prospect ahead is the heat. At just 58 million km from the Sun, working at Mercury is like being in a pizza oven.

The sides of the probes in direct sunlight will have to cope with temperatures over 400C. Even those surfaces facing away from the Sun have to be protected from the radiant heat coming up from the "hot potato" planet below.

Coping strategies include covering the MMO in thick blankets of insulation material made from titanium and ceramics.

"The environment is extremely hostile," explains Esa mission controller Elsa Montagnon. "At Mercury, we get 10 times the solar energy we get at Earth. But then from the illuminated side of Mercury, we get about four times what we get on the Earth. So, the spacecraft are continually in a heat sandwich."

What are the key British contributions?

The major UK instrument onboard the MPO is the Mercury Imaging X-Ray Spectrometer (MIXS). It will observe the abundance of chemical elements in the planet's outer layers. This information will be integral to solving the origin puzzle.

Airbus in the UK built large parts of the MPO and the mission's propulsion unit, called the Mercury Transfer Module (MTM). The MTM hosts "electric engines" developed by QinetiQ.

Two of these engines will be fired in the direction of travel, providing a gentle force to help control Bepi's fall into the inner Solar System.

"Each of our thrusters operates at 125 millinewtons, and one way to visualise that is that it's the same as the weight of a two-pound coin," said QinetiQ's Peter Randall.

How much has the mission cost?

It's expensive. Engineers have had a torrid time developing the technologies to keep Bepi safe so close to the Sun. Delays have added to the final ticket price.

It's estimated the costs borne by the European Space Agency and the Japanese space agency amount to about €1.65bn. Additionally, national space agencies in Europe have paid for the instrumentation on the MMO, taking the overall budget above €3bn.

This number covers the full lifecycle of the mission, from its approval (2007) to its termination (late 2020s). By way of comparison, the cost of Bepi would pay the salaries of the top seven football teams in the English Premier League for a couple of seasons.