Organisers of the climate talks in Paris say a final draft text has been reached after nearly two weeks of intensive negotiations.

An official in the office of French Foreign Minister Laurent Fabius told the AFP news agency the draft would be presented to ministers at 10:30 GMT.

No details of the proposed agreement have been released so far.

The tentative deal was reached nearly 16 hours after the talks had been scheduled to close.

"We have a text to present," the official said, adding that the draft would be now translated into the UN's six official languages.

Analysts say that this is not a done deal - it will only be finally adopted if there are no objections raised at Saturday morning's ministerial meeting, and even this is unlikely to come before afternoon in the French capital.

Mr Fabius, who has presided over the talks, had said earlier that the "conditions were never better" for a strong and ambitious agreement.

Significant progress had been reported on a range of issues, with evidence of real compromise between the parties, the BBC's environment correspondent Matt McGrath in Paris reported earlier.

He added that countries supported a goal of keeping global temperature rises to 2C but agreed to make their best efforts to keep it to 1.5C. However, the language on cutting emissions in the long term was criticised for significantly watering down ambition.

The question of different demands on different countries, depending on their wealth and level of development - called "differentiation" at the talks - was said to be the root cause of the difficulties.

Another major difficulty was transparency - richer countries want a single system of measuring, reporting and verifying the commitments countries make as part of this agreement.

It is said to be crucial to the US, which wants to ensure that China is subject to the same sort of oversight as it is. China and India are not keen on this type of oversight.

We're in the final hours. French Foreign Minister Laurent Fabius has been meeting in huddles with key players throughout the night, hammering out a compromise.

But there was serious opposition to the previous draft and it's too soon to say how much of that the new document will have defused because delegates will be seeing it for the first time this morning.

It's a UN process so any deal has to be signed off by everyone and that gives disproportionate power in the final last few hours for any nation wanting clauses inserted or removed.

One positive note came with the announcement that Brazil was willing to join the so-called "high-ambition coalition" of countries including the EU, the US and 79 countries. The alliance said it would push for an ambitious and legally binding deal with a strong review mechanism.

US President Barack Obama spoke to his Chinese counterpart Xi Jinping by phone on Friday, with both leaders saying they were committed to an "ambitious" deal.

"Both leaders agreed that the Paris conference presents a crucial opportunity to galvanise global efforts to meet the climate change challenge," a White House statement said.

"They committed that their negotiating teams in Paris would continue to work closely together and with others to realise the vision of an ambitious climate agreement."

COP 21 - the 21st session of the Conference of the Parties - has seen more than 190 nations gather in Paris to discuss a possible new global agreement on climate change, aimed at reducing greenhouse gas emissions to avoid the threat of dangerous warming due to human activities.

COP21 Live: All the latest from Paris

Explained: What is climate change?

In video: Why does the Paris conference matter?

Use the slider to see how the text has changed 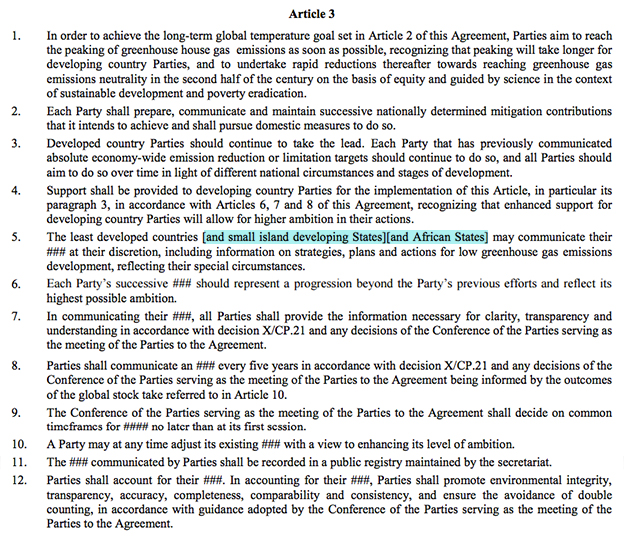 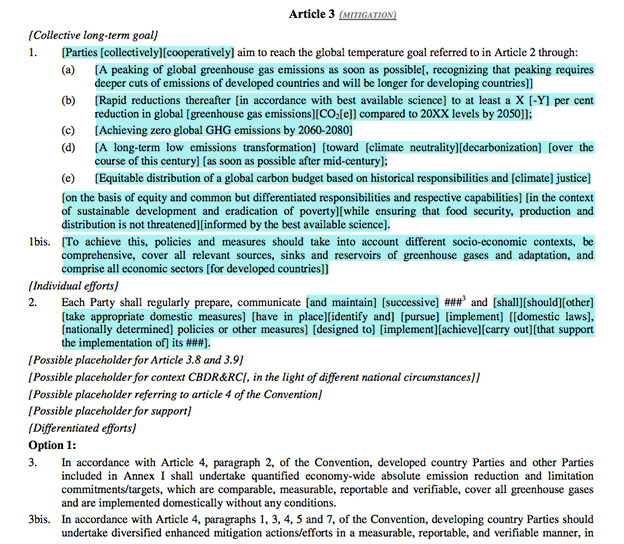