Austrian Felix Baumgartner has become the first skydiver to go faster than the speed of sound, reaching a maximum velocity of 833.9mph (1,342km/h).

He said he almost aborted the dive because his helmet visor fogged up.

It took just under 10 minutes for him to descend. Only the last few thousand feet were negotiated by parachute.

Once down, he fell to his knees and raised his fists in triumph. Helicopter recovery teams were on hand moments later.

"Let me tell you - when I was standing there on top of the world, you become so humble. You don't think about breaking records anymore, you don't think about gaining scientific data - the only thing that you want is to come back alive," he said afterwards at a media conference.

None of the new marks set by Baumgartner can be classed as "official" until endorsed by the Federation Aeronautique Internationale (FAI).

The jump in numbers

Its representative was the first to greet the skydiver on the ground. GPS data recorded on to a microcard in the Austrian's chest pack will form the basis for the height and speed claims that are made.

These will be submitted formally through the Aerosport Club of Austria for certification.

There was concern early in the dive that Baumgartner was in trouble. He was supposed to get himself into a delta position - head down, arms swept back - as soon as possible after leaving his capsule. But the video showed him tumbling over and over.

Eventually, however, he was able to use his great experience, from more than 2,500 career dives, to correct his fall and get into a stable configuration.

Even before this drama, it was thought the mission might have to be called off. As he went through last-minute checks inside the capsule, it was found that a heater for his visor was not working. This meant the visor fogged up as he exhaled.

"This is very serious, Joe," he told retired US Air Force Col Joe Kittinger, whose records he was attempting to break, and who was acting as his radio link in mission control at Roswell airport.

The team took a calculated risk to proceed after understanding why the problem existed.

Baumgartner's efforts have finally toppled records that have stood for more than 50 years.

Kittinger set his marks for the highest, farthest, and longest freefall when he leapt from a helium envelope in 1960. His altitude was 102,800ft (31km). (His record for the longest freefall remains intact - he fell for more than four and a half minutes before deploying his chute; Baumgartner was in freefall for four minutes and 20 seconds).

Kittinger, now an octogenarian, has been an integral part of Baumgartner's team, and has provided the Austrian with advice and encouragement whenever the younger man has doubted his ability to complete such a daring venture.

"Felix did a great job and it was a great honour to work with this brave guy," the elder man said.

The 43-year-old adventurer - best known for leaping off skyscrapers - first discussed seriously the possibility of beating Kittinger's records in 2005.

Since then, he has had to battle technical and budgetary challenges to make it happen.

What he was proposing was extremely dangerous, even for a man used to those skyscraper stunts.

At Sunday's jump altitude, the air pressure is less than 2% of what it is at sea level, and it is impossible to breathe without an oxygen supply.

Others who have tried to break the records have lost their lives in the process.

Baumgartner's team built him a special pressurised capsule to protect him on the way up, and for his descent he wore a next generation, full pressure suit made by the same company that prepares the flight suits of astronauts.

Although the jump had the appearance of another Baumgartner stunt, his team stressed its high scientific relevance.

The researchers on the Red Bull Stratos project say it has already provided invaluable data for the development of high-performance, high-altitude parachute systems, and that the lessons learned will inform the development of new ideas for emergency evacuation from vehicles, such as spacecraft, passing through the stratosphere.

Nasa and its spacecraft manufacturers have asked to be kept informed.

"Part of this programme was to show high-altitude egress, passing through Mach and a successful re-entry back [to subsonic speed], because our belief scientifically is that's going to benefit future private space programmes or high-altitude pilots; and Felix proved that today," said Art Thompson, the team principal.

However, the FAI rules, state that to claim an official ballooning record, a balloonist must also bring the envelope down and therefore the Austrian's altitude will forever remain just an unofficial mark.

A BBC/National Geographic documentary is being made about the project. This will probably air first in the UK and in the US in November, and in other territories sometime soon after. 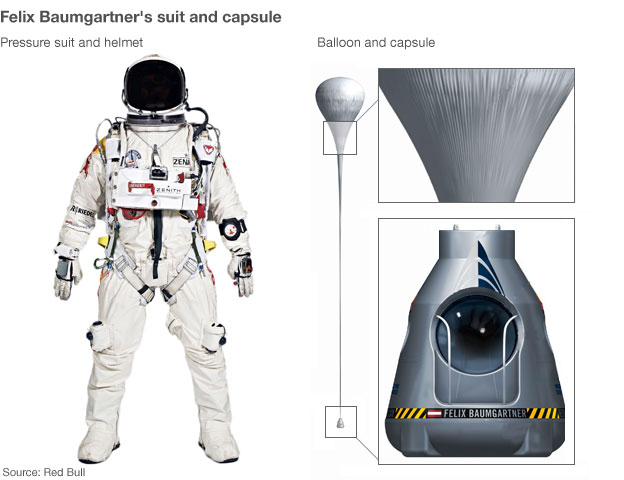 HD camera on each leg

Suit made of layered material

The warning came just after a pro-democracy campaigner asked for more international support.

How have the arts reacted to cash injection?

What are my rights if I'm stopped and searched?